“Cities, like dreams, are made of desires and fears, even if the thread of their discourse is secret, their rules are absurd, their perspectives deceitful, and everything conceals something else.” – Italo Calvino (Invisible Cities)

Valletta, like any other capital city the world over, has a duty to fulfill; that of being the showpiece of the country of which it is capital. 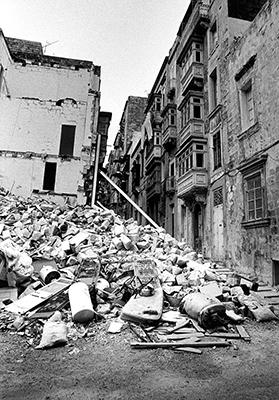 Its diminutive size ironically concentrates its intrinsic ingredients into a heady concoction of architecture, humanity, smells, sounds, history and lore.

These last two decades have rejuvenated its architectural fabric after years of abandon and dilapidation.

However, it suffered a concurrent displacement of its population due to market factors brought about by the architectural and urban regeneration.

Most of the citizens reluctantly had to give up the properties which they had rented for generations and move out to other towns and villages.

The capital city progressively lost its soul although a new cosmopolitan vitality of cafeterias, franchises and restaurants was infused into it. This regeneration ignored this major sociological factor which demographically changed Valletta forever.

Pisani’s photographic documentation of this change spans more than three decades and is a visual biography of a post-Independence Valletta that was still coming to grips with a post-bellicose trauma that had butchered its architectural fabric, part of which was in imminent danger of collapsing.

Notwithstanding this scenario, the residents had a life to live, one which was mired in social problems but for which entertainment was provided in the bars and music halls of a narrow stretch of street that traversed Valletta from west to east – Strait Street.

This notorious street and its colourful night life were feted by the famous American novelist, Thomas Pynchon in his novel V.

The decadence, the romantic trysts, the mingling of nationalities was a melting pot that vanished forever in the last decades of the 20th century as the British forces left the country.

David Pisani experienced this transformation and, as the French photographer Eugène Atget did for Paris, he sought to document evanescent traces before they disappeared or became invisible under the auspices of urban modernisation and renaissance.

The Grand Harbour and the neighbouring hamlet of Marsa offer a different perspective but are as essential to Valletta as Strait Street itself.

The harbour is incidentally the theme of the first work by Pisani, Grand Harbour, September 1982 in the Vanishing Valletta series.

Pisani snapped this picture in 1982, while he was still in his teens.  Grand Harbour is a major tourist attraction, while Marsa has for a long time been acknowledged as a hinterland to the capital itself. It unwillingly accepts any overflow of social problems and sorrowful stories, as one can ascertain in Albert Town, October 1993. It seems that Marsa has many a time been left to its own devices.

Pisani has captured in an Edward Weston-inspired style its industrial desolation so eloquently. Malta Shipbuilding Marsa, March 1992 is a minimalist masterpiece in which a solitary tree reminds us that life and hope can be found even in the most arid of conditions. 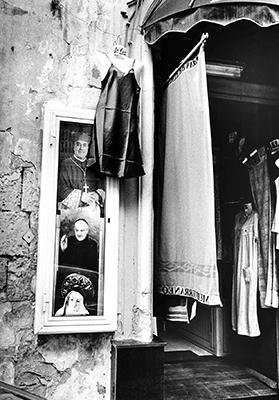 In Atget, Pisani found a kindred spirit as well as a mentor. He visited the French capital regularly and studied assiduously Atget’s oeuvre especially the techniques which the French master em­ployed; particularly the elevations of his architectural work.

The French photographer claim­­ed that: “For more than 20 years by my own work and personal initiative, I have gathered from all the old streets of Vieux Paris photographic plates, artistic documents of the beautiful civil architecture of the 16th to the 19th century: the old hôtels, historic or curious houses, beautiful facades, beautiful doors, beautiful woodwork, door knockers, old fountains. This vast artistic and documentary collection is today complete. I can truthfully say that I possess all of Vieux Paris.” The Maltese photographer has done precisely this almost a century later for our baroque capital city. This he did over a stretch of more than 30 years.

This collection of photographs rigorously excludes most of the traces of human life. However, the architecture emanates an aura that transmits a Proustian loss of time.

It is this idiosyncracy that Pisani intended to capture in an exercise of empathy besides via direct observation through the viewfinder of his camera.

Up to 1996, he feels that Valletta was entangled in an inertia, a status quo that prevented the city from re-inventing itself so up to that point there was no urgency to document its fossilization. Things changed when a condemned building in St Ursula Street suddenly collapsed.

St Ursula Street, October 1995, shows the aftermath of this incident, which could have had grave consequences for the family that squatted in it.

Thankfully, this incident claimed no victims but it set off the alarm bells ringing that further procrastination was dangerous. A plan for the rehabilitation of the whole city was taken off the back burner.

A collection from Pisani’s Valletta portfolio was exhibited at Paris’s prestigious Mois de la Photo in 1996 preceding its June 2000 entry into the collection of the Bibliothèque Nationale de Paris. Valletta and its environs, the vicissitudes of Marsa and the Grand Harbour area got the poetic dignity they deserved.

In the late 1990s, the Valletta Rehabilitation Project successfully took off. Pisani took it in his stride and tried to document as much as he could before it was rehabilitated away.

Forgotten corners were shoved into the limelight; easily overlooked details like the door numbers in 133 Old Mint Street, March 1994, emerged in full glory.

Old Bakery Street, June 2007 projects a Minor White sensibility in the juxtaposition of a framed improvised tryptich; the archbishop of the time, Dun Ġorġ Preca and a female saint had probably been invoked by the owner of the shop to bless his wares.

A curtain-like piece of merchandise and the vestment-like garments invite us into a sacred dark solemn space of a ‘chapel’. One would almost expect to get a whiff of the smouldering tallow candles.

The post-war decades were a mixed fortune for Valletta’s business community in which business ventures like that in St Zackary Street, June 2009 went out of business.

The irrevocability of this is suggested in the boarded iron shutter and the dilapidation of the once proud shopfront. 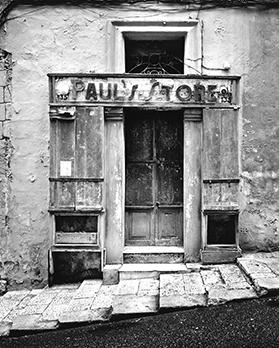 An intricate archway which is almost hidden from view suggests an earlier maybe residential use of the building. 135 St Christopher Street, September 1998 similarly narrates another story of a business that flourished decades ago but whose door had closed for one last time ages ago like a tombstone on a grave.

The Mediterranean sun has bleached the life out of the painted woodwork.  The shop sign ‘Paul’s Store’ endows it with its own unique history that probably was Paul’s own too, whoever he might be.

Through the photographic documentation of these shop façades and signs, Pisani captures the soul of a business community in Valletta that has disappeared, probably as collateral damage of the city’s population displacement.

The steady stream of humanity that sought everyday custom from these business enterprises became a slow trickle as the population of these neighbourhoods decreased exponentially.  Years of neglect has imbued in them the elegiac sadness of mementos.

North Street, June 1998 displays an Andrew Wyeth sensitivity in the random assortment of brilliant white bedsheets and pillow cases suggestive of ghosts which are a backdrop for the black assortment of clothes.

Pisani crops the picture in a very tight perspective that gives a context to the background architecture.  Everyday life unfolds behind those walls and clothes are soiled, washed and hung to dry.

In the meantime, the theatre has recaptured some of its original function while the market has been repurposed into something different altogether.

Valletta is, nowadays, a capital city without a functioning covered market although one can still glimpse the mastery in the stunning iron work of its structure.

Valletta Market Interior, February 2000 ironically records some of its majesty.  However, the visual cacophony in the newly refurbished structure has deprived Is-Suq tal-Belt of the dignity that it had enjoyed in the past.

For Pisani, the demolition of the controversial city gate symbolised the end of an era for our capital city. It was as if the act had liberated the old ghosts from their centuries’ old haunts as the bulldozer in Demolition of City Gate, May 2011 breached the old city walls.

The initial days of the City Gate Project heralded the last days of a photographic project that had accompanied Pisani from his late teens to his middle age.  Both the city and its photographer were moving on.

Walter Benjamin’s comments on the Parisian oeuvre of Eugène Atget hold true for Pisani’s pictures of the Vanishing Valletta series.

Both photographers were in love with the city they so intimately portrayed – “The city in these pictures looks cleared out, like a lodging that has not yet found a new tenant.

“It is in these achievements that surrealist photography sets the scene for a salutary estrangement between man and his surroundings. It gives free play to the politically educated eye, under whose gaze all intimacies are sacrificed to the illumination of detail.”

It is this tender attention to detail that enhances and celebrates the intimacy that existed for more than three decades between a Maltese artist and his vanishing capital city.