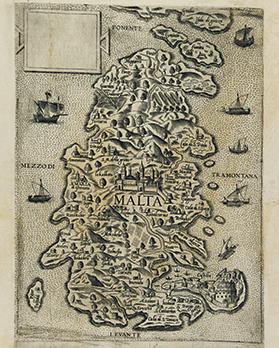 A map dating from between 1551 and 1558 grossly misplaces Fort St Angelo, named Castello. With no space to show it in its proper position in the centre of the east side of the Grand Harbour, it was moved to the open sea.

Over the centuries, maps of Malta show it enduring a number of aquatic reincarnations, morphing from the shape of a pebble to a jellyfish, before finally settling as a fish.

Some of these rare and curious maps of the island, dating from the second century AD to 1564, are explored in The Pre-Siege Maps of Malta, a new book by Albert Ganado and Joseph Schirò.

Published by the Malta Map Society and BDL, the book draws from libraries and private collections around the world, from Europe to Turkey and the United States.

The very earliest maps depicting Malta are composite ones of the Mediterranean.

An 1157 map by Al-Idrisi is of extreme importance for its antiquity and rarity. It is perhaps the earliest map which portrays Comino and also names it.

Al-Idrisi describes Malta thus: “To the east of this island [Pantelleria] at a distance of one hundred miles is the island of Gozo, which has a secure harbour. From Gozo to a small island called Comino. To the east of this lies Malta, a large island with a safe harbour opening to the east. Malta has a city. The island abounds in pastures, flocks, fruit and above all in honey.”

The first separate map of Malta dates to the 1470s, which proves its importance at the centre of the inland sea notwithstanding its extreme smallness. It was a vital focal point for navigators and a seaward bridge between Sicily and the Barbary states. 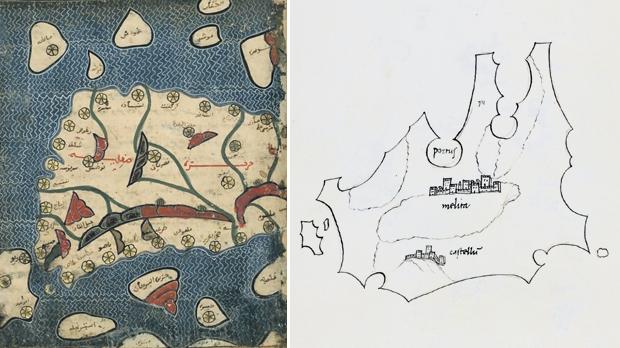 A medieval map of Sicily and the Aeolian Islands from 1157 by Al-Idrisi. Malta, Comino and Gozo are depicted at the top left of the map. Most of the early Islamic maps were oriented south. Right: Dating from the 1470s, this is the first known separate map of the Maltese islands. The map bears no relation to the real shape of Malta.

However, it was only in the 16th century that Malta acquired the status of a pawn on the European chessboard. When it became the new seat of the Order of St John in 1530 after its eviction from Rhodes, the island was exposed to frequent raids by Ottoman forces and the Barbary corsairs of the fame of Barbarossa and Dragut. It was therefore imperative for the Turkish captain Piri Reis to show Malta in his manuscript books on nautical charts in the 1520s.

When the Order settled in Malta, its formidable fleet became a constant threat to the enemy ships plying the waters of the Mediterranean, especially because Tripoli had been conceded to the Knights Hospitaller together with Malta. In 1551, a Turkish armada under Sinan Pasha and the famous corsair Dragut sacked Gozo and carried away into slavery its whole population, after which they went on to capture Tripoli. This heavy raid captured the attention of Christian Europe, especially Italy, and maps of Malta were produced in Rome and Venice.

The book is sponsored by the Alfred Mizzi Foundation.