The Prime Minister urged journalists to read all of the 115-page court judgment that found Owen Bonnici guilty, when justice minister, of systemically breaching the right to free expression. So I braved the lot. Reader, Bonnici’s critics have been going easy on him.

The case is Manuel Delia’s against Bonnici. On Bonnici’s direct orders, the State cleared – several hundred times – the flowers and candles at the memorial to Daphne Caruana Galizia, situated at the foot of the Great Siege monument. 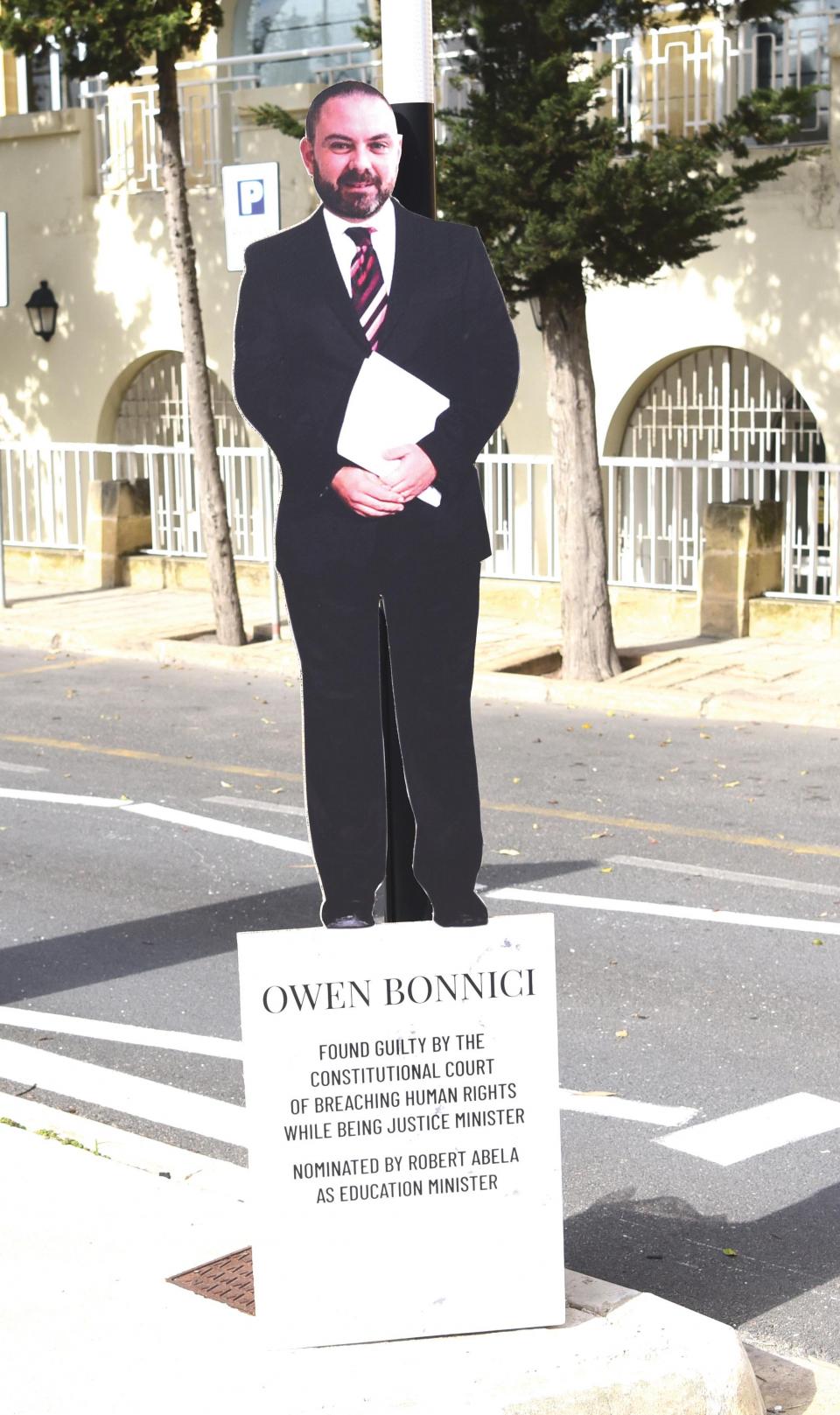 A mock ‘monument’ saluting for Owen Bonnici in the wake of a court judgment finding him guilty of breaching human rights was erected outside the Education Ministry by rule of law group Repubblika. Photo: Mark Zammit Cordina

The judge, Joseph Zammit McKeon, considers every angle and a mountain of European case law. He finds no justification for the State’s actions. The justifications actually given were spurious, while the violations of free expression were grave. Moreover, the judge finds Bonnici guilty of more than just systemic breaches of human rights.

There are details in the judgment that are worth highlighting for their political significance, not just their illumination of our rights.

On free expression, the judge says that it is not only a fundamental right in itself. It’s also part of the foundation of other rights. It makes their exercise possible. That’s why breaching free expression is a grave matter. It’s a breach of a collective way of life, not just the right of this or that individual. It’s an affront to all of us – including those who may disagree with the message.

Next, the judge makes a sharp point, which escaped the government’s apologists. The protesters say the choice of the Great Siege monument was coincidental; they simply want a place opposite the law courts. The judge points out that that means that the choice of place is an intrinsic part of the message.

To say that the candles and flowers could be left... but only in another place (as the apologists urged) is actually to censor the message. So long, Solons.

Third comes a detail of political significance, submerged in the case law. The judge considers whether the interests of public order and security could justify the clearing. We know the Daphne memorial attracts hotheads, furious at any respect shown towards the assassinated journalist. They’ve been violent with protesters and have vandalised the memorial.

Here, the judge says the State’s duty is not to suppress free expression but to provide the proportionate resources for security. Obvious enough. But the precedent he cites is the 1986 case instituted by Eddie Fenech Adami to claim the right to hold a meeting in Żejtun – a right that had been denied in the name of public order. The Courts had recognised Fenech Adami’s right. The aftermath was the violent attack on Nationalist Party supporters in Tal-Barrani Road.

The judge’s point is purely legal. But it resonates loudly beyond the law. The Tal-Barrani incident has iconic status in our political history. “From Tal-Barrani to Brussels” – from the brink of the democratic abyss to EU membership – is a benchmark of the country’s political evolution.

To have a judge draw an analogy between a case in our times and the mid-1980s is an indictment of where we are now and how far we have slid.

Zammit McKeon also considers the government’s justifications. He finds none credible. The government departed from its usual practices to discriminate against the protesters.

It claimed it wanted to make sure the monument was not marred by unsightly dead flowers. But the usual practice is to wait for a few days to do that. Here it was immediate. Besides, it was clear that the protesters were sprucing up the memorial twice a day. The flowers that were cleared away were never wilted, let alone dead.

The government also claimed the monument needed restoration. But the authorities usually contacted, in such instances, were not.

Zammit McKeon stops there because he’s interested in breaches of the law. Ministers do not break the law when they lie in public. But it is a serious political sin. And here we have two sins.

In alleging that the protesters were damaging the monument – with nothing to show to convince the court – the government was effectively smearing its critics. And in saying that the monument needed restoration because of damage inflicted by the protests – again, with no convincing evidence in court, despite the State’s witnesses – the government was misleading the public.

Now, I disagree with the judge that Bonnici was behaving out of pique. When a minister orders an action, to be carried out several hundred times, in the face of international opprobium, he’s clearly implementing government policy, not expressing merely personal choices.

But Bonnici did sign up to the policy. He carries responsibility not just for directly breaching human rights, but also for an attempted smear of critics, and for misleading the public.

In democracies that take themselves seriously, a minister would automatically resign from Cabinet if judged by the Courts to be implicated in just one of those offences, let alone all three. Good intentions don’t matter. Nor does a minister’s talent and potential (and Bonnici is endowed with both).

Instead, Bonnici has been unrepentant in public. He has continued to be disingenuous. He’s said that Zammit McKeon’s judgment shows there is no political interference with the judiciary. But the claim of interference concerns judicial appointments made post-2013; Zammit McKeon was elevated to the bench before that. Bonnici is just trying to confuse matters.

In one narrow sense, the case has been providential. For in the judgement we find one of the best definitions of national unity. It should find its way into our politics.

“Unity” is not in itself good. Diverse, conflicting opinions and dissent do not in themselves divide us. It’s sharing the values of the Constitution that unites us – the values that help us make sense of and manage our differences, which help us see that dissent can be loyal to a shared way of life.

It’s for this reason that the judge found Bonnici guilty of sowing division. By his actions, Bonnici separated our political discourse from its constitutional underpinning. We are one because we enjoy the same rights.