If you were to ask any Gozitan about the last għonnella, his or her mind would turn to no other than Ċensa Vella whose għonnella would have been seen meandering the streets of Victoria until early 1991.

The faldetta as the għonnella is known in English, was a full-length gown, arching over the head to lend an air of modesty. The irony was that although Ċensa sought no attention, she inadvertently attracted followers of all ages.

Hundreds of negatives must have found themselves in dark rooms on an international level, as her solid-black hooded garment would bloom out of a solution.

Ċensa was as delicate as the silk she wore, her gentle ways as appealing as its pleated folds.

Ċensa’s father, Vincenzo Vella, had served with the Royal Artillery in World War 1 and was buried in Quebec. Marie-Roz Cremona was Ċensa’s mother whose own mother was from Switzerland; known as “il-Mamma-Mi”, she had served as midwife to families of the British forces in Chambray. 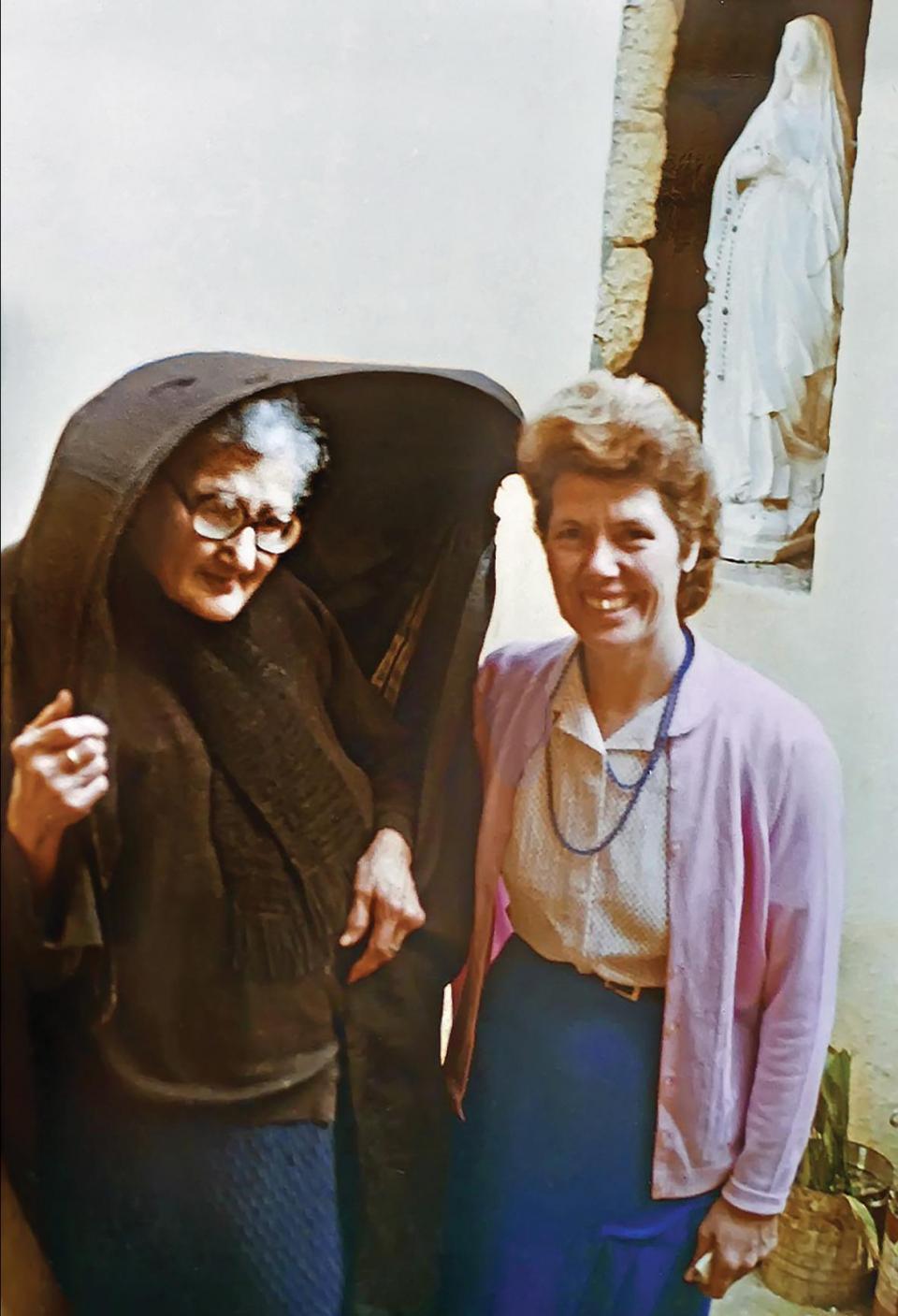 To mention that the family were devout Catholics would be an understatement.

Ċensa’s uncle, Mgr Luigi Vella, is currently in the process of beatification. A monument to him stands proudly in Savina Square, next to the church he had had enlarged, within which Ċensa spent many an ‘hour’ in quiet devotion to the Holy Eucharist, a practice known as is-siegħa, instituted by her very uncle.

The street leading from the monument to Ċensa’s house is now named after him.

Ċensa’s elder sister, Giorgia, would also attend daily Mass at dawn before going about her household chores and daily cooking. I can still recall her tasty dishes made with fresh eggs laid by hens kept in two lofts.

Meanwhile, Ċensa was only too happy to do shopping rounds, which often included a stop for fresh fish, for which she had a discerning eye (as intimated so nicely by the adjoining photo captured by photographer Daniel Cilia in the 1980s). Ċensa would also buy fish for the many cats that followed her around, as did neighbourhood children, knowing that she always had a kind word for them.

“Bonġu, Ċensa, hoy” you would hear them call out cheerily from doorways, as well as on brushing past her għonnella in Victoria’s quaint alleyways.

Nicknames abound on the island of Calypso, and Ċensa’s family has not escaped tradition. The family were known as Tad-Dubloon, which refers to Spanish gold coins they possessed, along with several properties in the capital, before the individual houses were sold off as wars came and went. 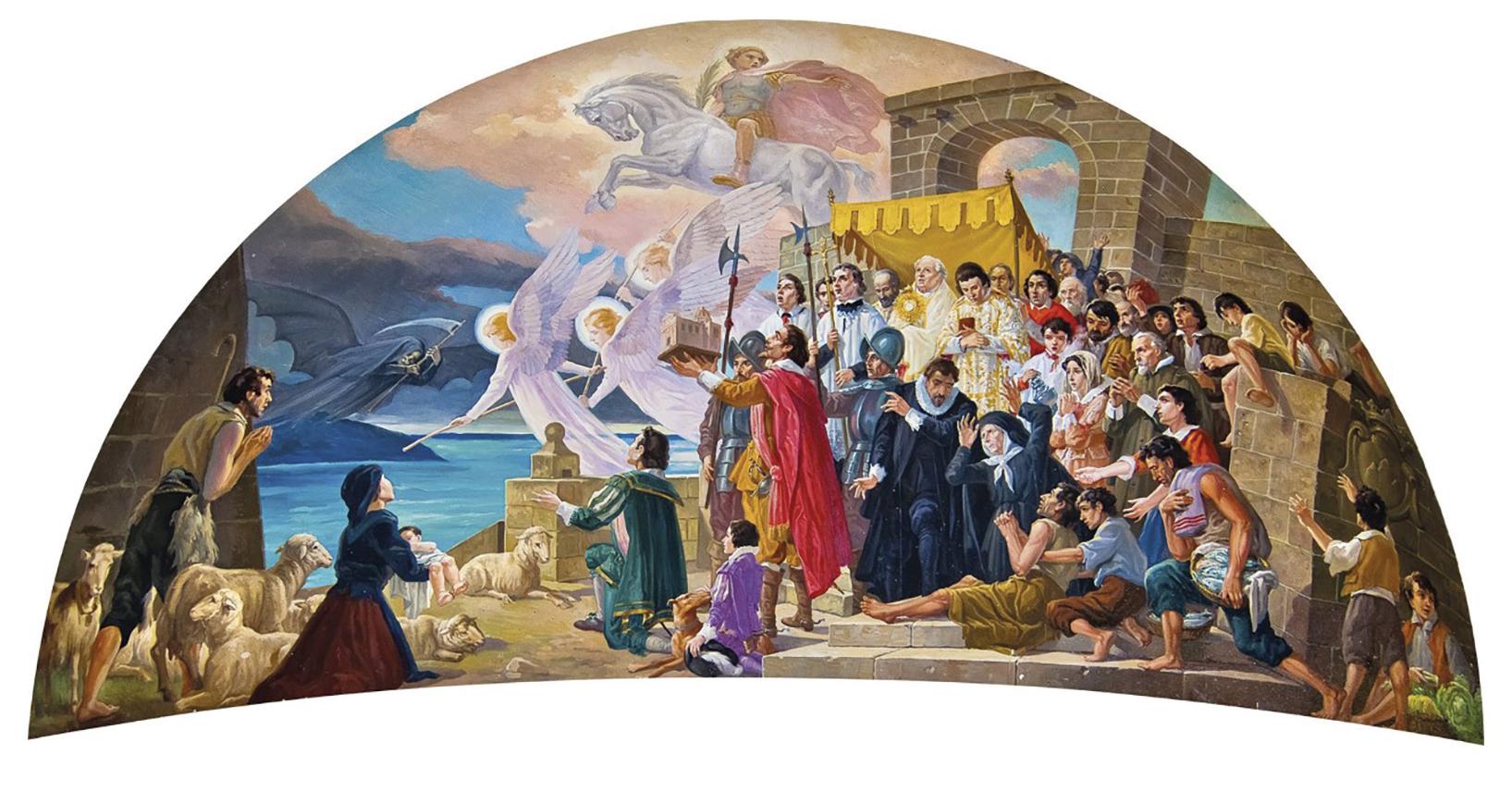 A lunette at St George’s Basilica in Victoria depicting Ċensa in her għonnella. See detail above.

Ċensa, along with her seven brothers and sisters, was brought up in an extensive medieval corner house in the vicinity of the lush Lunzjata valley in Victoria.

Dating from the time of the Great Siege, it has a reconstructed exterior balcony with crescents, carved out of limestone, in its original style.

Trust was the order of the day in Ċensa’s time; a large key would have been left in the front door lock. The open courtyard at the entrance gave on to a sweeping staircase while a framed painting by Millet, depicting potato diggers bowing their heads in recitation of the Angelus, used to hang by the landing, reminding guests that they were entering a blessed home − being dedicated to prayer, Ċensa and her sisters were referred to by the locals as sorijiet tad-dar or house nuns. These are not to be confused with the religious members of the MUSEUM movement which had its own distinct character; in the latter case, females enrolled in the religious society also wore għonnelli in the early days but their dress became modified over time. Under her għonnella, Ċensa’s skirt, which lay over many petticoats, would reach her ankles.

My recollections are filled with happy memories of Ċensa’s spiritual way of life. It was like entering a convent, as the mumbling of the rosary could be heard until sundown, to the rattling tune of lace bobbins or ċumbini, as close neighbours and female relatives would lean forward on rattan chairs to rest their lace-making cushion trajbu or mħadda against the wall or the back of another chair, under the open-arched passageway upstairs. This gave on to a sunny patio brimming with plants, enveloped delightfully in the scent of jasmine. 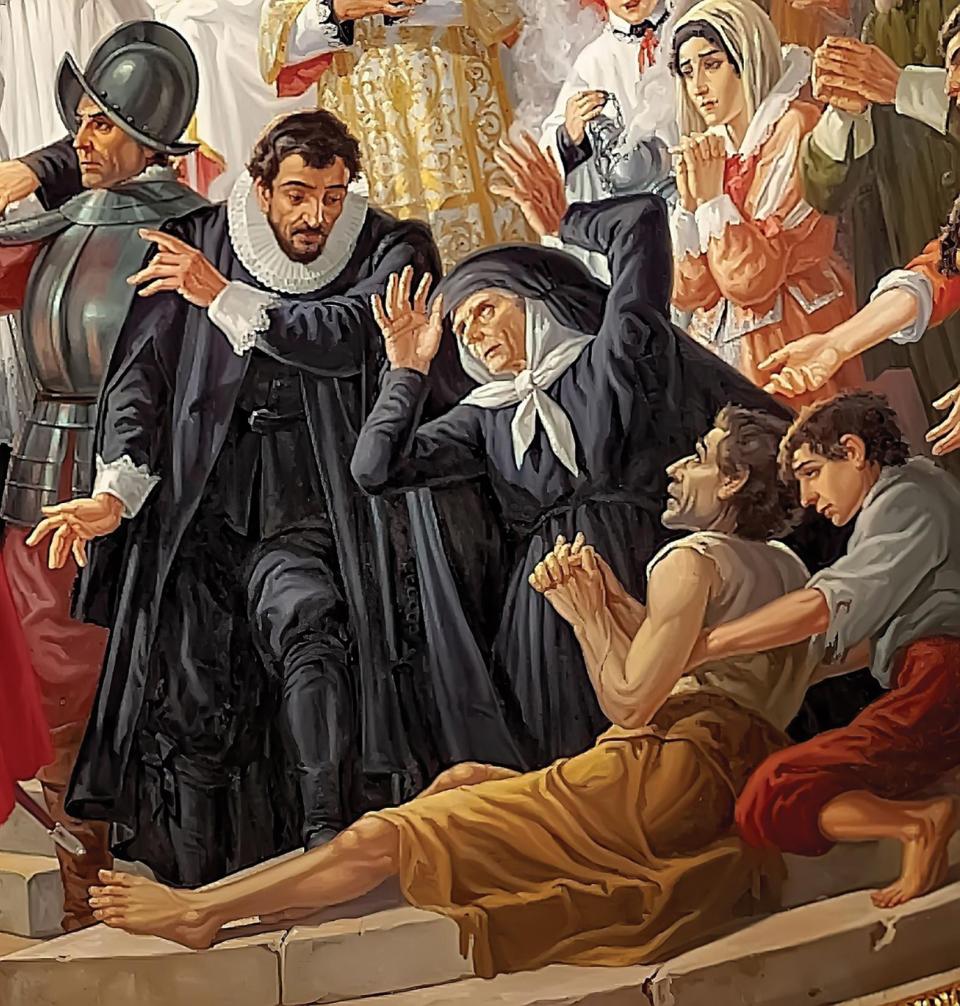 Ċensa would be working on her moska pattern in the open doorway of her adjoining bedroom. The dining room nearby had a decor of antique furnishings, lit sternly by oil lamps before evening prayer and early bedtimes. Frames with biblical pictures served to remind you of your immortality, as images of purgatory warned of Judgement Day. A glass-domed baby Jesus surrounded by minute beaded flowers lay next to effigies of saints in glass pillars on the white marble top of a chest of drawers with sculptures in the shape of a lion’s head. A showcase (vettrin) solidly witnessed the devotion of the makers of bizzilla (lace) in the winter months.

Yet, although Ċensa was surrounded by this solemnity and went about in charmingly simple ways, she sported a sense of humour shared by one of her cousins with whom she had enjoyed many a prank in her younger days. One such incident included the delivery of a letter to Ċensa’s sweet-natured elder sister Teresa ‒ only this had originally been intended for Ċensa herself ‒ from an English soldier stationed in a nearby field. So it was that Teresa ended up marrying Frederick Gould instead and thus left Gozo for Norwich, where she had an only child, my bubbly grandma Mary Melita.

Melita, in turn, married a jovial Londoner, William Joseph Tyler, also in the army. So in came another nickname, Tal-Ġinġer, as my mother’s generation and mine would be referred to.

Mum’s siblings also adored Gozo, although like their parents, they would all initially settle down in England, with Uncle Patrick moving to Australia. Friends and relatives in Victoria always ask after them whenever I visit Gozo from Greater London, where I myself have settled. 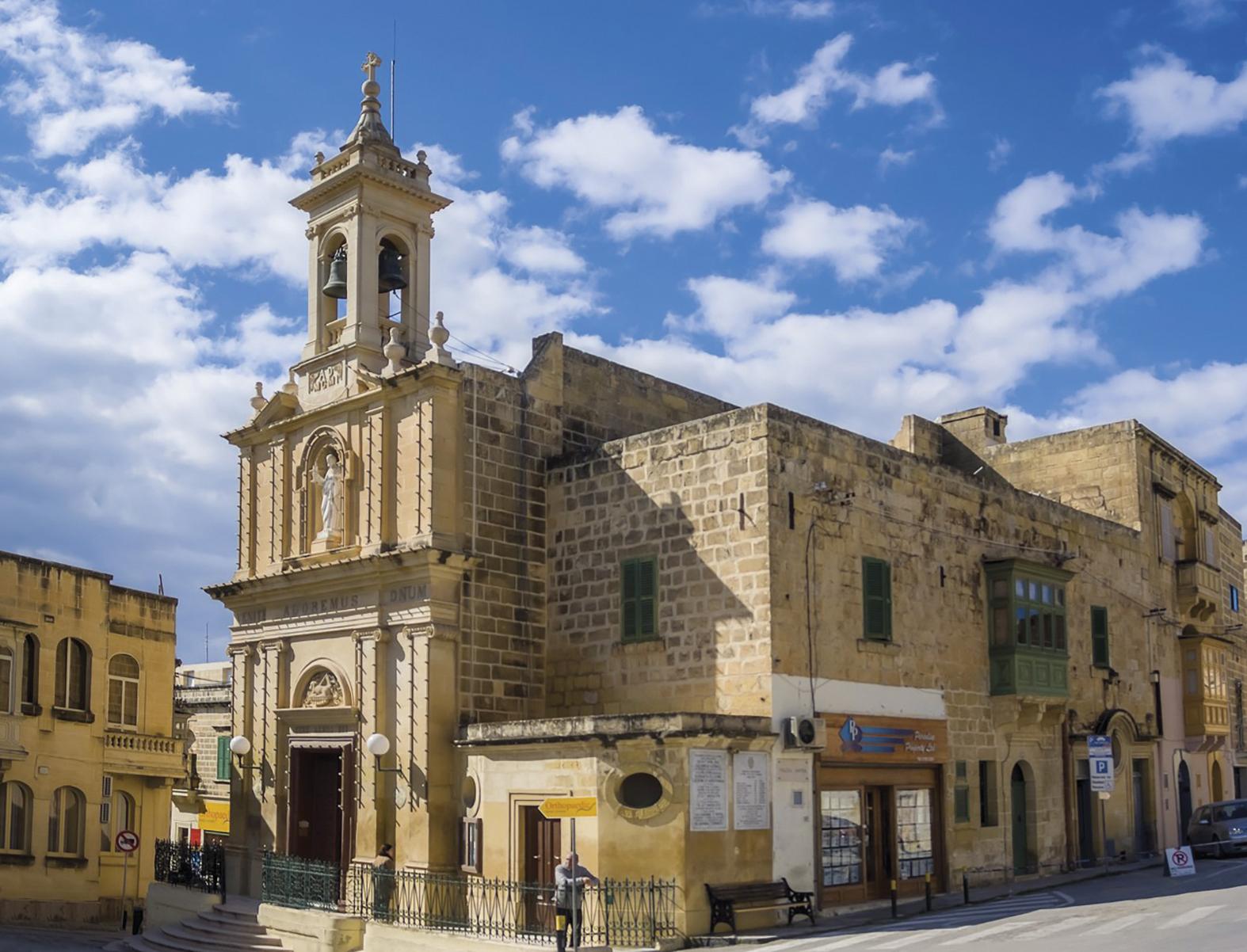 Ċensa spent many an hour in quiet devotion to the Holy Eucharist at the church of the Nativity of Our Lady, better known as Ta’ Savina, in Victoria.

Ċensa, on the other hand, only got as far as Malta. She used to visit Sliema regularly at one point when her sister Teresa and Frederick had been stationed at Tigné Barracks.

Ċensa’s brothers, on the other hand, doing their part in World War I, went abroad. One of them is buried in Ontario, Canada, another in Wales. Sadly, the war took its toll on the youngest, Mikiel, a blacksmith, who was to suffer from post-traumatic stress after seeing fighting in Gallipoli.

Ċensa and Giorgia treated their brothers with deference: as children, my younger sister, Tanya, and I would be mindful not to disturb our great-granduncles’ mealtimes or siesta. We would join Ċensa in her small, quaint room filled with an assortment of Nativity crib figures, knick-knacks and curiosities.

I was in my element as Ċensa loved literature and art. Her brother Emmanuel had been a professional photographer and the antechamber downstairs had been his studio. His own nickname, Tal-Fekruna, had been earned after he had taken home an injured sea turtle, placing it in a tank in the well room; neighbours would gather around to see it.

I remember Manuel tipping his hat courteously to acquaintances as he went about Rabat. Having spent long years in California, he spoke to me in fluent English and would enquire encouragingly about my studies, reminding me how erudite my ancestors had been. Manuel was the last of the brothers to survive. It fell to mum to look after my great-grandma and all her siblings especially in their old age, which she did lovingly.

Some of my great-grandmother’s ecclesiastical cousins included three Gauci monsignors of the cathedral in Victoria, who were very fond of Ċensa’s tranquil presence. Members of the family lie in marble tombstones within the cathedral’s lavish marble paving.

While a marvellous painting of her uncle embellishes the ceiling near the entrance to the cathedral, Ċensa found herself painted by an Italian artist, Giovanni Battista Conti, who immortalised her image in St George’s Basilica. Sweetly and characteristically, the lady who wore the last għonnella could not deny the stranger’s request. Little did she imagine that she had become a symbol of the century that was dying away, of a culture that so many of us knew and loved; that she would become part of the folklore of a gem of an island.

Yes, while Ċensa is buried next to my grandparents in Gozo, the memory of her last għonnella, which is cherished by my mother, is precious because the wearer engendered the very values and traditions of its nation. It was worn with humility, love and sincerity.