This is part one in a two-part series of articles.

The life and work of Żabbar parish priest Joseph Zarb, who played a pivotal role in the coronation of the titular painting of Our Lady of Graces 70 years ago.

In giving his prognosis of the 20th century in his monumental book, Life of Christ, US archbishop and theologian Fulton Sheen pointed out that “Communism has chosen a Cross without Christ while post-Christian western Capitalism has picked up Christ without his Cross”.

This story might have been a true post-mortem condition of European civilisation during the nihilistic 20th century had it not forgotten a tiny rock in the middle of the Mediterranean, Malta, which the destructive sea of continental Europe failed to reach. 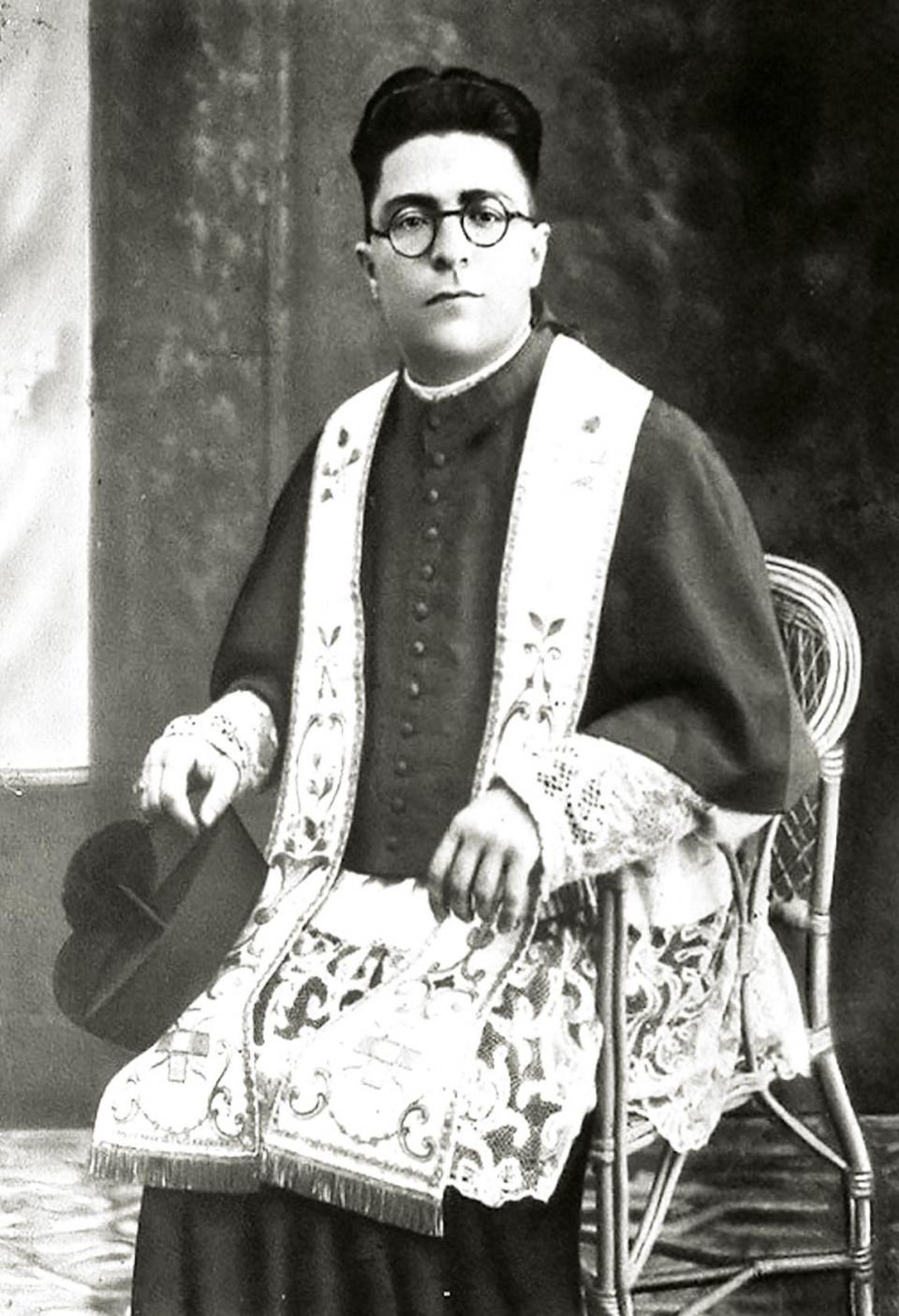 Mgr Joseph Zarb at the beginning of his ministry as parish priest.

It is no wonder that then Cardinal Francis Joseph Spellman described Malta as “the fortress of Catholicism” during his visit to the island in 1958. The remnant cardinal might have been wrong in his claims, particularly in thinking that the Axis bombardments had simply ravaged the stones of faith but left no slight lesion to the corpus fidem. His eminence was nonetheless right in thinking that certain emblems of Catholicism were alive and kicking.

Post-war, the parish priest was anew in paroceia papa (in parish pope) and, hence, like that telling line in the Vatican hymn, taken with a pinch of sarcasm, a pharus in tenebris (a beacon in the darkness).

One such parish priest was Mgr Joseph Zarb. Born on December 9, 1912, he was the second of 12 children of Joseph and Carolina née Cancio. He completed his studies in philosophy and theology and was subsequently ordained a priest together with 32 other men: three Augustinians, five discalced Carmelites, four Carmelites and 20 diocesan priests. He received the holy orders on July 25, 1937, from the hands of Bishop Michael Gonzi. In 1942, he was installed as parish priest of Kirkop, where he stayed for just one year. He was succeeded by Fr Michael Spiteri of Żejtun. 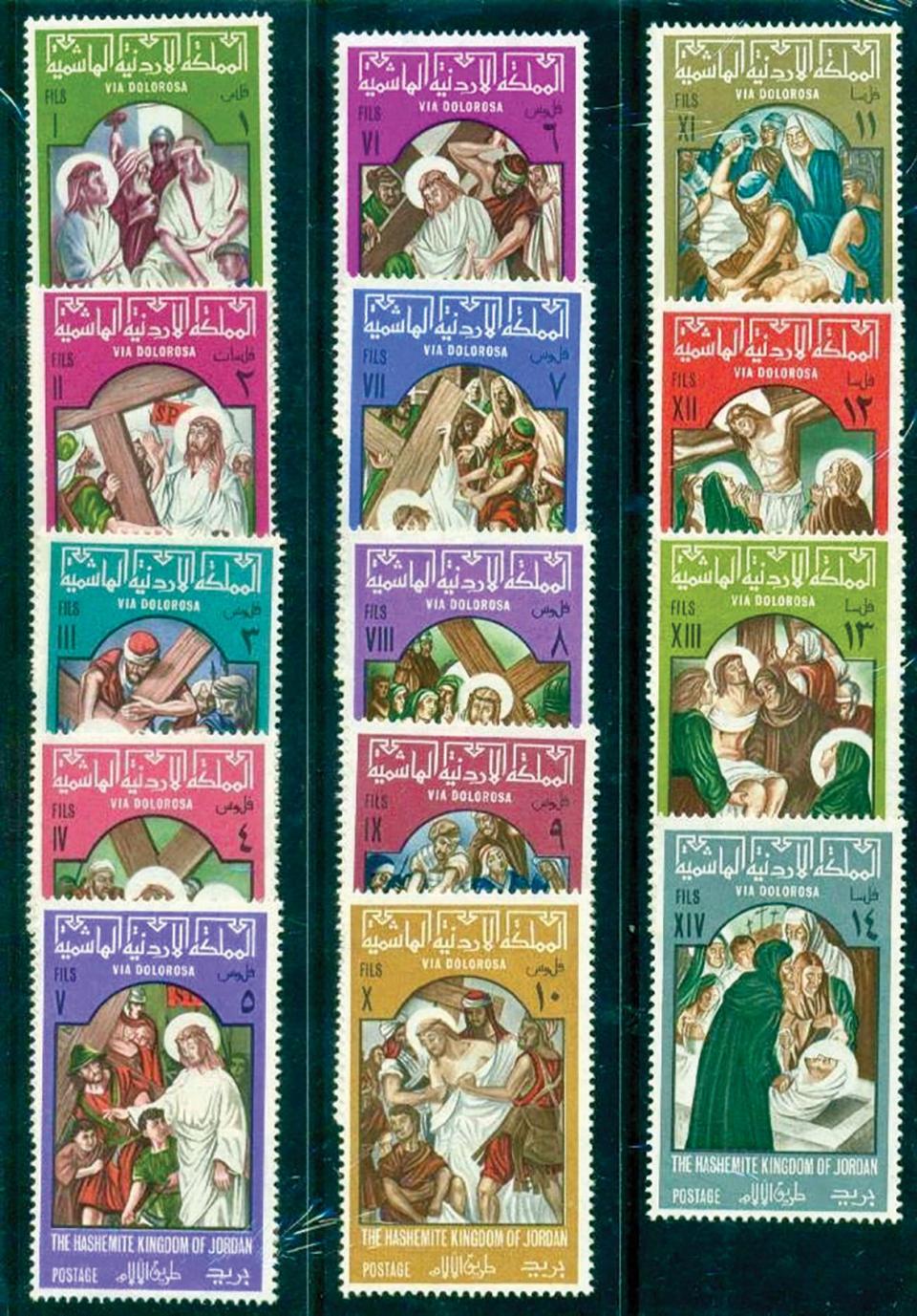 The Via Sacra designed by Giovanni Battista Conti was illustrated on a set of stamps in Jordan in 1966.

In the parish of Żabbar, just when Zarb became parish priest of Kirkop, another new parish priest had been installed: Fr Joseph Lanzon. While the latter was climbing the stairs in front of the church’s parvis a few months after he began his ministry, he was hit by the blast of a bomb and his health deteriorated quickly.

Following the somewhat sudden death of Lanzon, the parish was left vacant. In 1943, there were three options: Fr Carlo Manché, a certain Fr Spiteri and Zarb. Manché went to Gżira, Spiteri was afraid of the war and Żabbar was left with one choice ‒ Zarb.

The instalment of Zarb took place on March 14, 1943. Karmenu Ellul Galea, the then rector of the confraternity of St Michael, wrote that the first thing Zarb told him was that he would ensure the coronation of the titular painting of Our Lady of Graces would take place. Incidentally, an uncle of Zarb’s mother, Canon Joseph Azzopardi, was part of the chapter that crowned the titular painting of the Immaculate Conception of Cospicua. 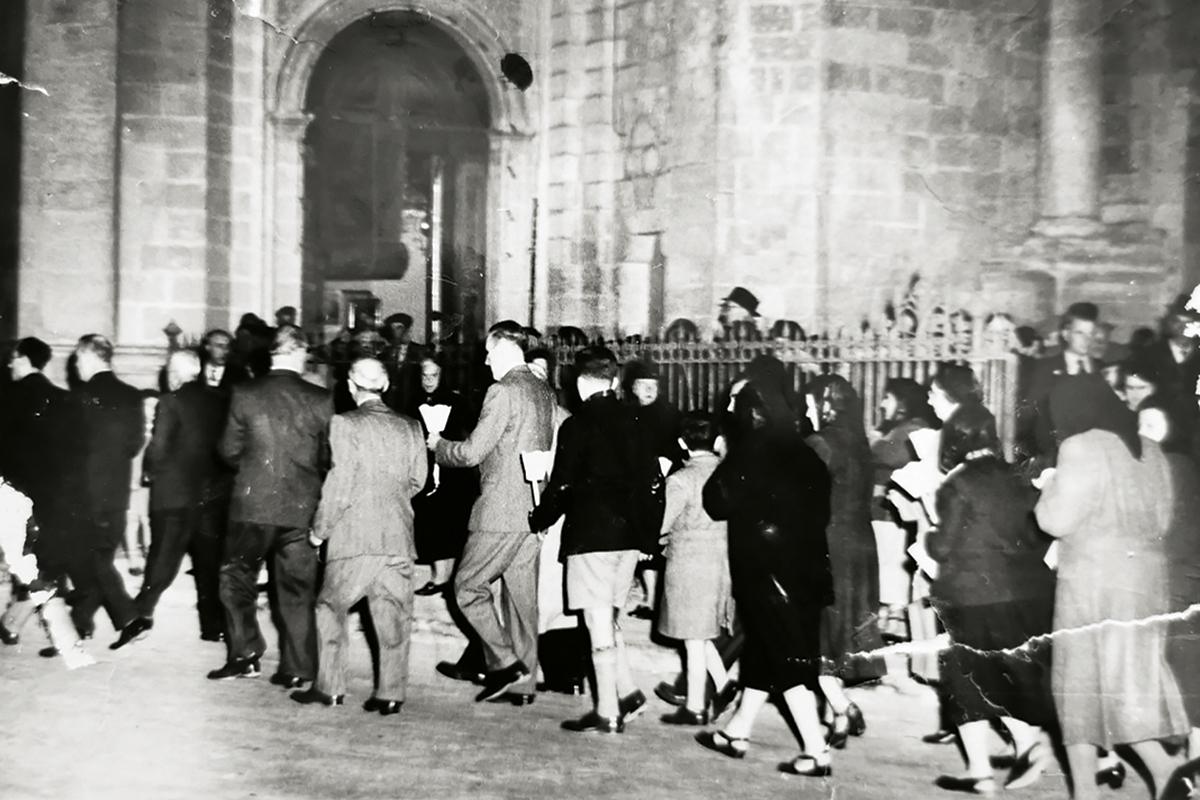 A pilgrimage to the Żabbar sanctuary.

When paraphernalia meant something, Żabbar did not have any. While Cospicua could boast of its per insignis (noteworthiness), Senglea of bearing all ecclesial titles (sanctuary, basilica and collegiate church) and Vittoriosa of having the right to all episcopal privileges, such as the faldstool, Żabbar was barren of such privileges. But its people did not want ecclesial honours for their church,  only honours for their Madonna.

The Vatican granted permission for the coronation on July 20, 1949

The first signs of propaganda for the coronation had started in 1916 with the publication of Sidtna Maria Tal-Grazzja (Our Lady of Graces) by Dun Xand Cortis, which highlighted the need to crown the effigy. This would take a new direction with Zarb.

He first made the necessary repairs to the sanctuary which had suffered a lot of damage during World War II. In 1943, he started the female section of the Catholic Action. 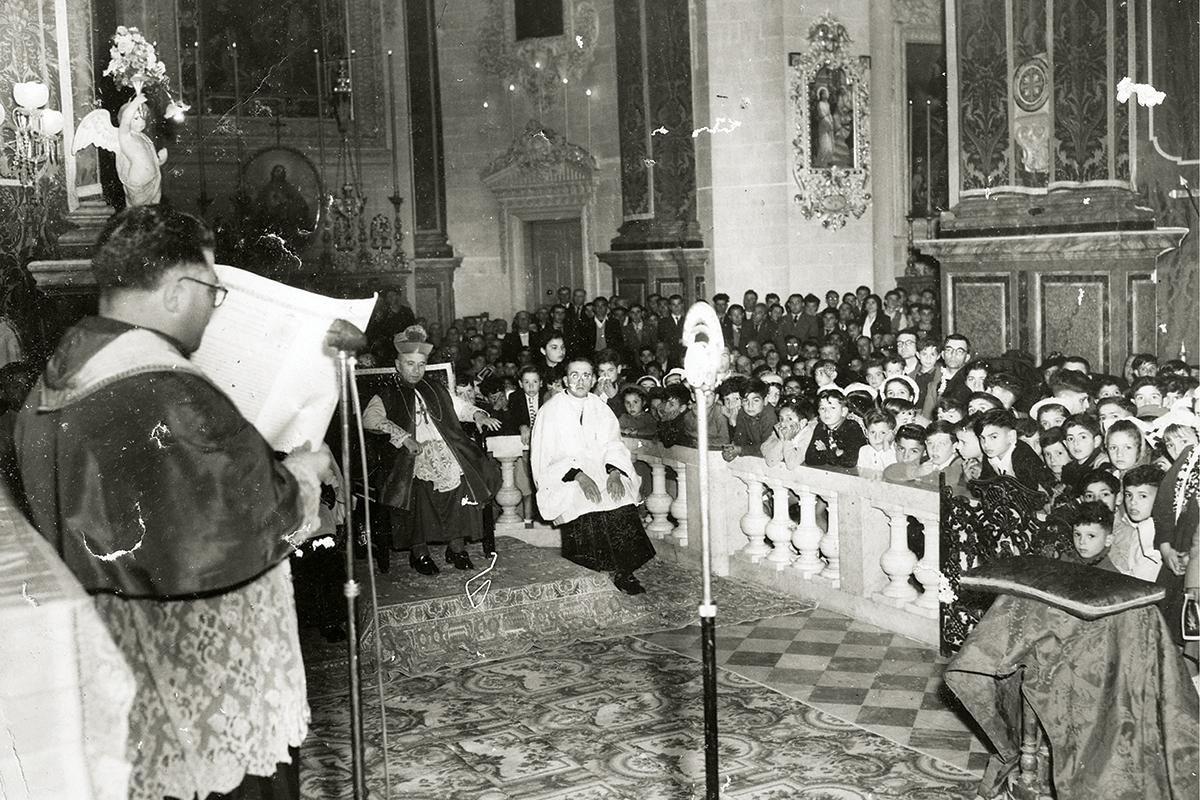 Mgr Joseph Zarb reading the decree of the coronation.

In 1946, Zarb published the book Is-Santwarju tal-Madonna tal-Grazzja (The Sanctuary of Our Lady of Graces), started the third order of Our Lady of Sorrows and, on October 11, the pedestal for the reliquary was inaugurated. On August 2, 1947, the Xirka tal-Isem Imqaddes t’Alla was established and the paintings of the choir were uncovered.

The pavement of the central part of the nave and the aisles were covered with marble and two water stouts were placed under the first two naves. Opposite these, two niches for St Anthony and Our Lady of Lourdes were installed, paintings of the four evangelists were placed below the dome and Veritas Press started to operate on December 5. In the same year, the painting of the apotheosis was put up just above the titular painting.

The Vatican eventually granted permission for the coronation on July 20, 1949, exactly 70 years ago. 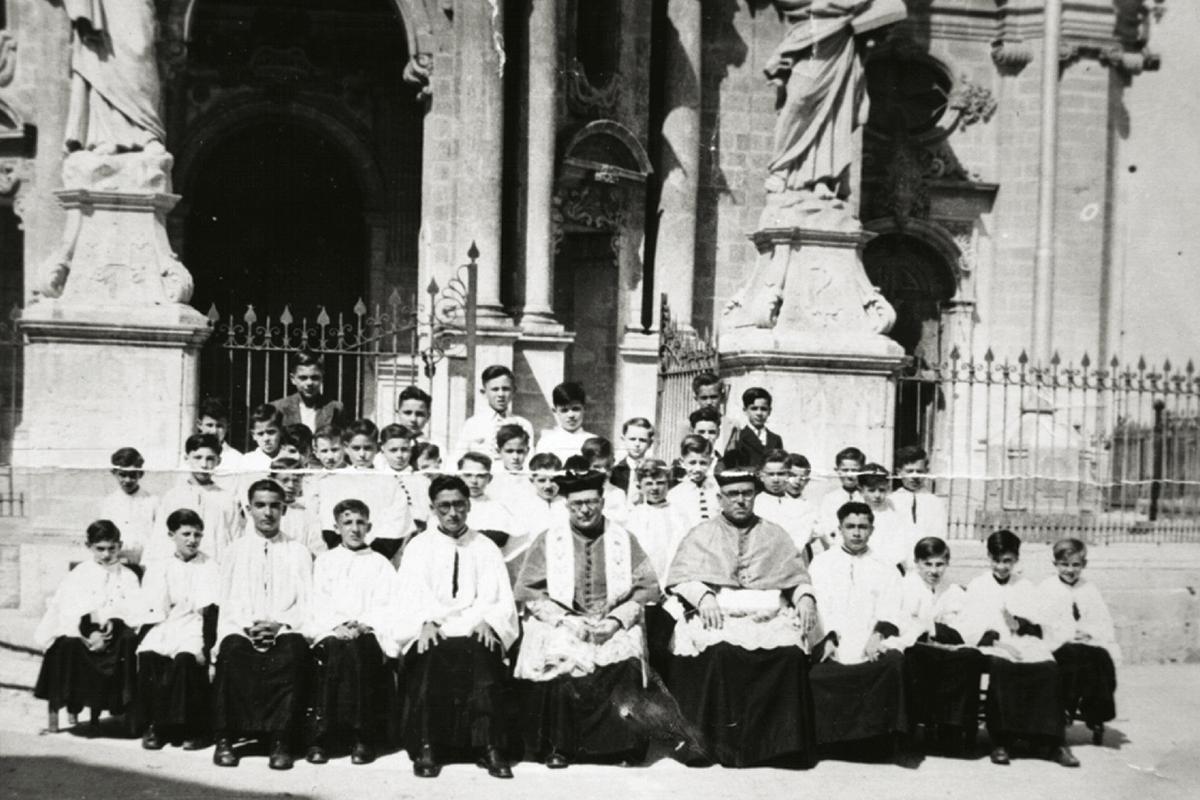 Mgr Zarb with the altar boys of the parish.

On June 5 of that year, a pilgrimage with the statue of Our Lady of Fatima took place and, on the same day, the Tamburini organ was inaugurated. The walls of the choir were covered with marble, the statue had its new silver crown and a mantum (mantle). In the same year, new paintings of the crucifixion, the Via Sacra (Way of the Cross), the Volto Santo (Holy Face), Our Lady of Sorrows and the Sacred Heart were unveiled, painted by Giovanni Battista Conti. The frames for the Via Sacra, Volto Santo and Our Lady of Sorrows were done by Antonio Agius. Seventeen years later, the Via Sacra would be illustrated on a set of stamps for Jordan.

Other projects followed in the 1950s, including those of the organ balcony and the covering with marble of parts of the transepts and the frieze of the whole church. On February 26, 1950, on the so-called Ħadd in-Nies (People’s Sunday), the coronation was announced for the first time.

During the following year’s People’s Sunday, the eight segments that would cover the interior of the dome were inaugurated. Many gifts were received before September 2, 1951, when the coronation was to take place. There were pilgrimages from most, if not all, parishes to Żabbar and chandeliers manufactured by the Ditta Murano were inaugurated. Two cornices designed by Carmel Tonna ‒ one for daily use and another for the feast day ‒ were presented.

A new tribunal and 10 altar covers with golden embroidery were bought for the festivities of the coronation. Two crowns made of gold were designed by Manuel Buhagiar. The firm Madiona carried out the works, using 18-carat gold at the cost of £1,800. The crown of Our Lady measures 9½ by 9½ inches and that of child Jesus is 6 by 6 inches. For the feast of the coronation, Zarb ensured that the church was covered with silk damask and he bought 13 silver lamps for the choir.

Manuel Abdilla is the secretary of the Żabbar Sanctuary Museum. 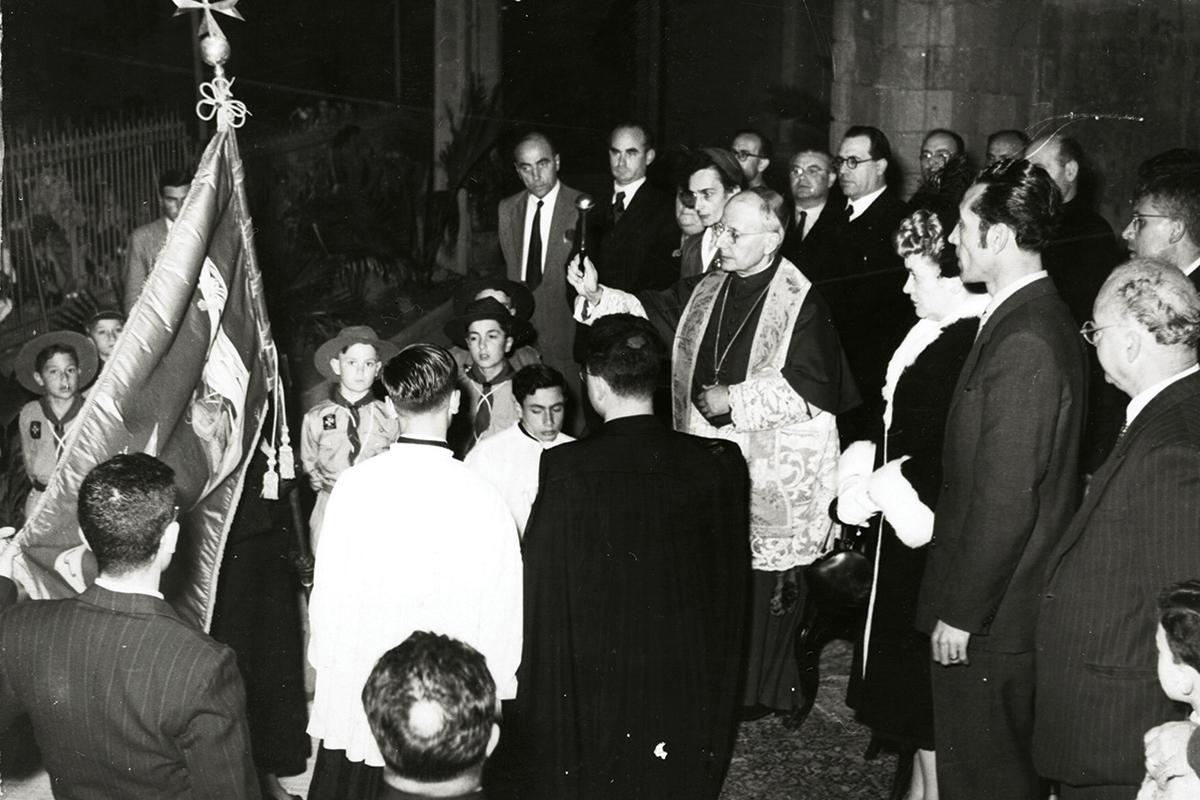 The blessing of the standard of the Żabbar sanctuary by Archbishop Michael Gonzi.