I have been researching and studying old maps of Malta for over 60 years and, strangely enough, it was the earliest known manuscript map of Malta that led me to look up the history of the Maltese dog – Catuli Melitensis.

I came to know of this map through the kind information passed on to me by the scholar and friend Anthony Luttrell in 1981. He told me it is inserted in a Codex at the Royal Library of Escorial in Spain.

I followed up this information and I obtained from the library details of the collocation of the map, as well as a good photographic reproduction, which I published in 2003 in my book Valletta Città Nuova – A Map History (1566-1600). 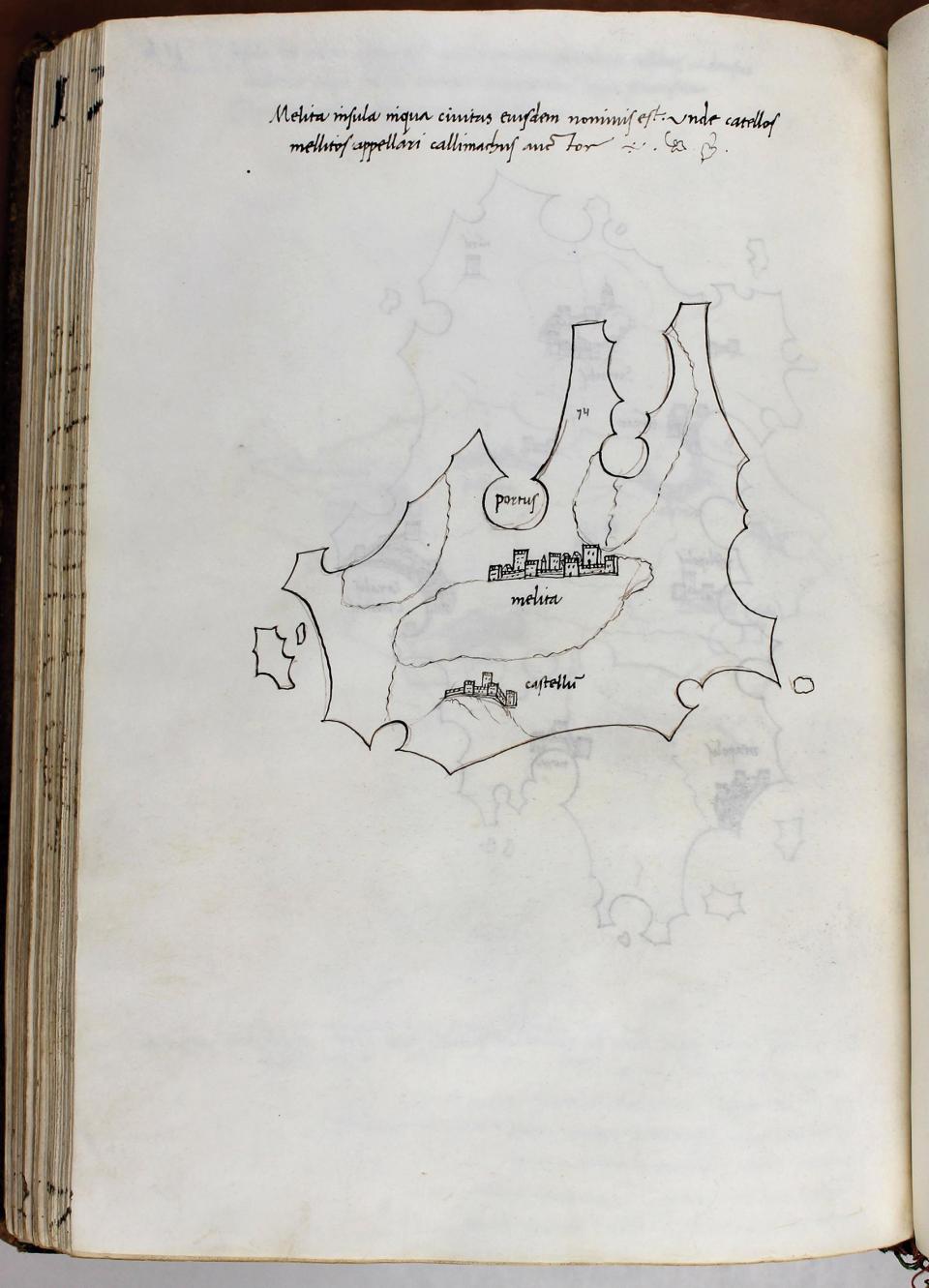 The map in the 1476 Cristoforo Buondelmonti Codex with the inscription written at the top.

It is drawn on parchment in portolan style with only three names and is extant in a manuscript codex by Cristoforo Buondelmonti (c.1385-post 1430). It was probably inserted in the codex in the 1470s but its author is unknown.

It quite clearly states that in the island of Malta there is a town of the same name and the Maltese dogs are named after Malta. This was written over 2,000 years ago.

The celebrated Callimachus was a Greek poet, critic and scholar of the Library of Alexandria and he enjoyed the patronage of the Egyptian-Greek pharoahs. A native of the Greek colony in ancient Libya, he lived in the years c.310-c.240BC.

Since Greek times, the Maltese dog has enjoyed an excellent appreciation for its beauty. The famous Greek philosopher Aristotle (384-322BC), who preceded Callimachus, wrote that the Maltese dog was a perfect puppy, “perfetto nella sua piccolezza” (perfect in its small size), delightful and beautiful and much sought after.

Some writers think that Callimachus was referring to Meleda in the Adriatic but that island has never been reputed to have produced Maltese dogs. 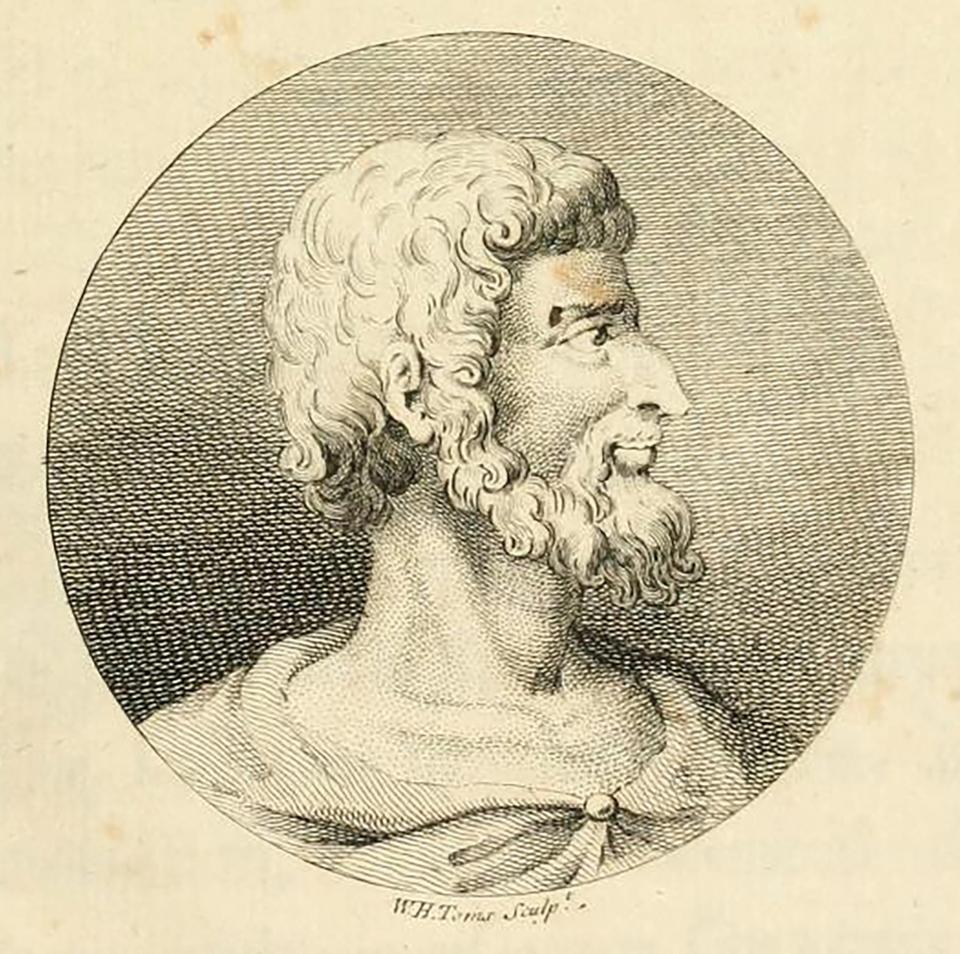 Callimachus as depicted in an engraving by William Henry Toms.

Strabo (AD 250) wrote that many beautiful dogs called Canis Melitei were exported from Melita opposite Pachino, in Sicily. But for millennia, our island was accepted as having been the true birthplace of these little dogs.

Of considerable interest to us Maltese is what was written by Marcus Valerius Martialis, known as Martial, who was born between AD 38 and 41, and died between AD 102-104. He was born as a Roman citizen in Hispania, the Spain of today.

During the first century, Martial, who was considered the greatest Latin epigrammist, wrote descriptive verses to a Maltese lap dog named ‘Issa’. It was owned by his friend Publius, the Roman Governor of Malta.

Since Greek times, the Maltese dog has enjoyed an excellent appreciation for its beauty

He wrote as follows: “Issa is more frolicsome than Catulla’s sparrow. Issa is purer than a dove’s kiss. Issa is gentler than a maiden. Issa is more precious than Indian gems. Lest the last days that she sees light should snatch her from him forever, Publius has had her picture painted”.

The full quotation has been given by Anna Katherine Nicholas in her book on the dog titled The Maltese (1984).

Various other ancient authors wrote about the Maltese dog, including Cicero. The Order’s historian, Giacomo Bosio, wrote as follows in 1602, quoting Cicero: “In Malta, some small dogs were bred, called Maltese dogs, as Varro (116-27 BC) and Plinius testify; they were among the joys of the ladies and the powerful, greatly beloved.”

In his book Arca Noë, Athanasius Kircher (1602-1680) wrote that two breeds of dogs were allowed to go on Noah’s Ark: the large breed, the Molussi Anglicani, and the small breed, the Melitæi. 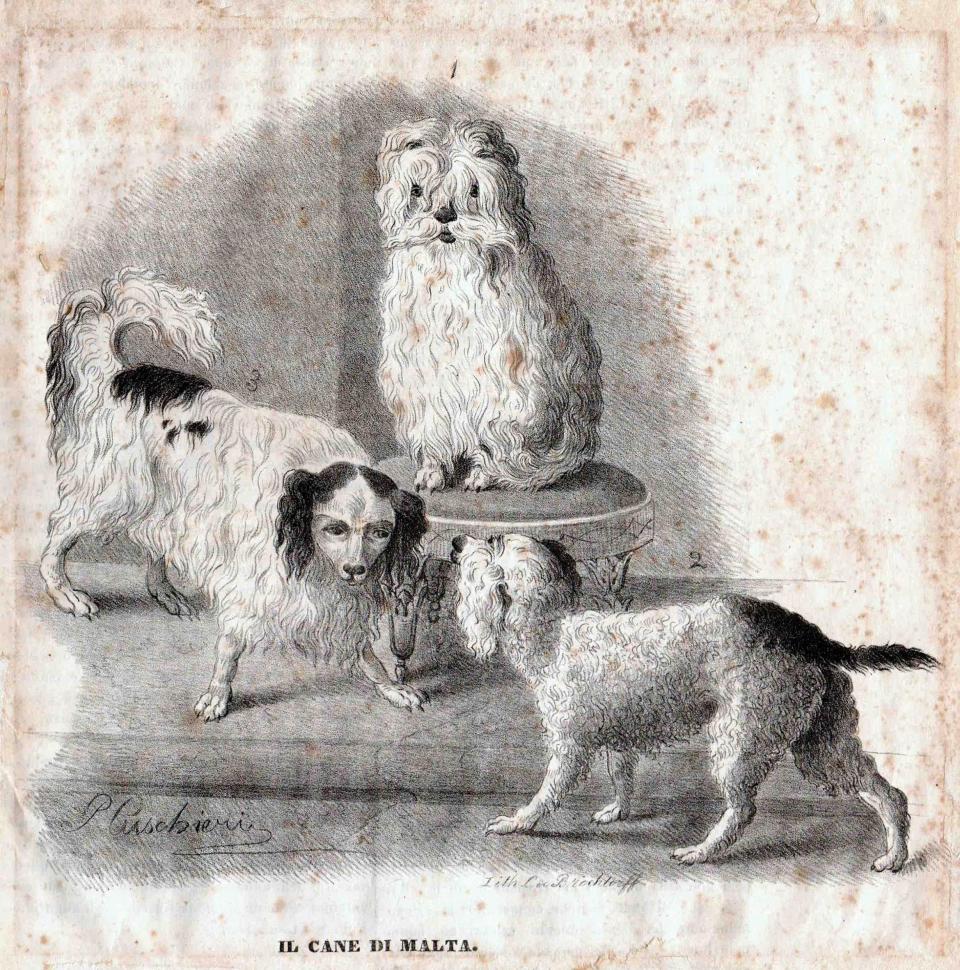 The Maltese lap dog was very popular among the British aristocracy and from the time of Queen Elizabeth I they have been frequently mentioned in British literature and have also been painted by various artists, including Sir Joshua Reynolds in 1763.

In the Malta context, artist Antoine Favray (1706-1798) painted a toddler in a walker playing with a small dog which looks like a Maltese dog but is white and black, not of pure breed. In 1746, Maltese author Ignazio Saverio Mifsud (1722-1773) wrote the sad story of four Maltese dogs destined for Rome that were suffocated while on board a ship between Malta and Naples.

Even the grand masters of the Order of St John treasured the Maltese puppy as a dear pet in arms and held in a cradle of silk adorned with a velvet sofa.

There was an occasion when Admiral Brusey, the French chargé d’affaires in Malta, wanted to take a Maltese dog with him as a present to his wife but he was unsuccessful. The Grand Master donated him “un bellissimo esemplare” (a beautiful example).

Pierre Marie Louis de Boisgelin de Kerdu (1758-1816) shows a Maltese dog with two ladies and child in one of his engravings in Ancient and Modern Malta published in 1804.

In 1816, Onorato Bres published in Rome his Malta Antica Illustrata (Ancient Malta Illustrated) in which he devoted a short chapter titled Cagnolini maltesi (Maltese dogs), of great value since ancient times, much sought after “per diletto, piccolezza e bellezza” (for its delight, small size and beauty).

A Maltese dog with its beautiful white hair was pictured in a lithograph signed by C. de Brochtorff (sic) published in the very first number of the Repertorio di Conoscenze Utili (Repertoire of useful acquaintances), dated January 14, 1843.

It was written by a zoologist who gives the full story of the pure Maltese dog going back to ancient times, accompanied by a scientific description and emphasising its glamorous white coat and very lively eyes. It could be bred from the union of a Spagnoletto (Spaniard) and a Barbino (small barbel).

When the Order left Malta, the breed became extinct as no one took the trouble to make them breed. The ladies failed to do it for fear of losing their puppy. Feeding them with toxic foods and export to other countries contributed to their disappearance. Some thought of bringing the breed back to Malta. 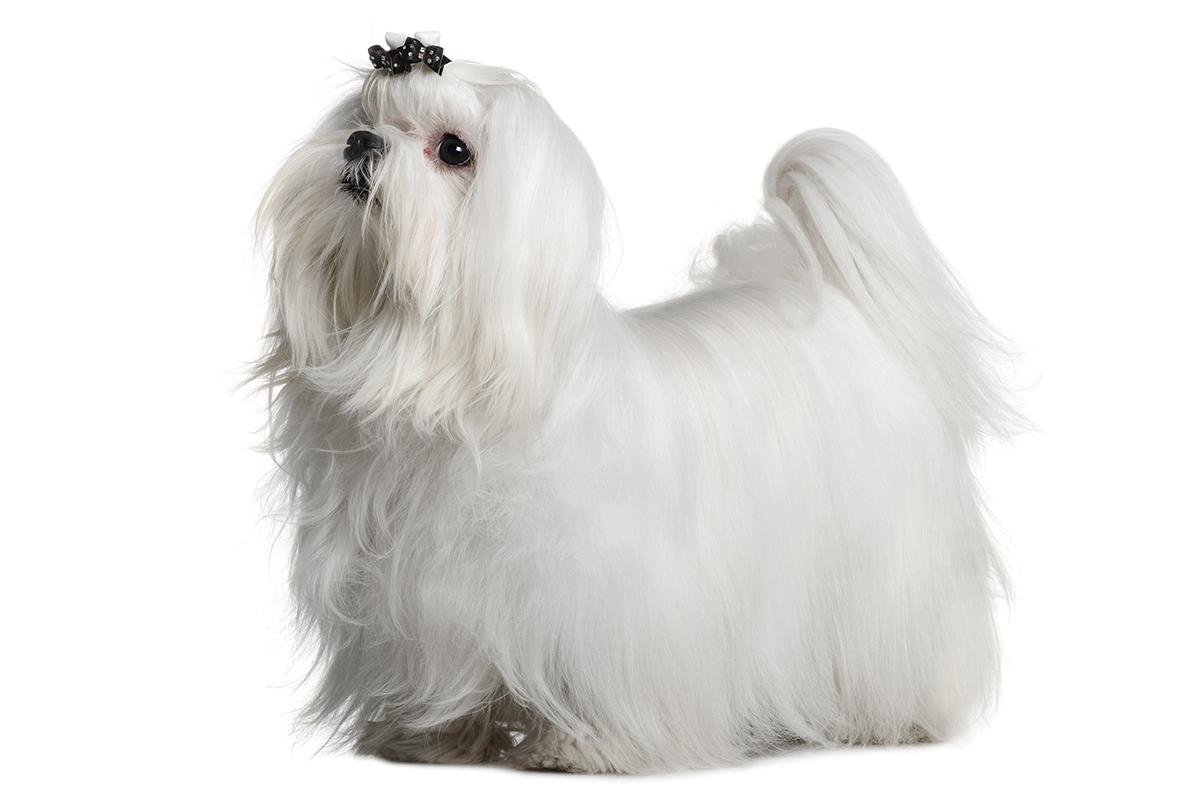 Their intelligence and personality make them a pleasure to have around

It is general knowledge that the Maltese dog is an adorable toy-sized breed, one of the smallest of this kind. Its stature is very small with an average height of eight to 10 inches (20.32 x 25.4 cm).

The standard size is just under 3.175 kilos. It has a single coat of hair varying from a long show coat or a short puppy one. Most Maltese dogs have a solid white coat.

Various books have been written on this gentle breed and it has been praised by all authors, ancient and modern. In Malta, apart from the Repertorio, I have come across a full-length article which appeared in The Daily Malta Chronicle of July 8, 1924, titled ‘Maltese dogs – The toy of ancient royalty’, quoting extensively from an article by James Gardner Rossman, a well-known fancier and breeder of Maltese dogs, published in The American Kennel Gazette and Stud Book.

Another 20th-century article on the dog I have come across was published on December 15, 1942, in Malta. Serie Romana, no. 61. It was signed ‘Meixu’ probably by the prolific Florentine historian and journalist Amy Allmand Bernardy (1879-1959), daughter of an Italian mother and an American of Irish descent. She contributed articles on Maltese folklore.

Her article in the Malta was titled Catuli Melitensis.

She recorded that in Greek anthology a funeral epigram was dedicated to a small Maltese dog named Toro owned by Hermolaus and Aldovrando filled a whole page in his monumental work. Even Frederick II of Prussia (1712-1786), the Hohenzollern king who reigned for 46 years, loved the Maltese dog so much that he kept half-a-dozen, giving them leather balls to play with.

As Anne Katherine Nicholas had emphasised: “It would be truly difficult, if not entirely impossible, to find a more thoroughly delightful, charming, interesting and satisfactory breed of dog to own as a companion than a Maltese. Their intelligence and personality make them a pleasure to have around. And their beauty makes them a delight to the eye”.

Yet, in Malta, it is completely forgotten. Of about 40 proverbs on dogs in the Maltese language, not one can be found on the Maltese dog. And I do not think its beauty has ever adorned a Malta postage stamp.