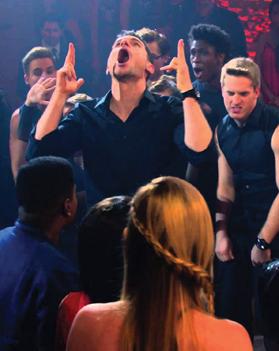 They’re back, Pitches! No longer the underdogs, the Barden Bellas, three-time Collegiate A Capella champions are defending their title.

However, while performing in front of a distinguished audience that includes the US president and his wife, their act goes horribly wrong, causing a major ‘scandal’ that bars them from participating in the any further national competitions.

Bloodied but unbowed, the musical group sees in the forthcoming world championships of A Cappella in Copenhagen their only chance at redemption. But with the end of their final year at college looming, for some of the Bellas priorities have changed.

Pitch Perfect 2 is the expected sequel to 2012’s smash comedy Pitch Perfect, which riffed on the sudden surge in popularity of Glee clubs, thanks to the success of the eponymous TV Show.

The film, however, carved out its own niche thanks not only to its wonderfully staged toe-tapping musical numbers, but also its sharp script, genuine humour and great performances by its sparkling cast led by Anna Kendrick and Rebel Wilson.

The cast is still on top form and ready to burst into song at the drop of a hat.

Yet, overall, the script (written by returning screenwriter Kay Cannon) juggles too many story strands which, while engaging for the most part, feels a little disjointed.

The film purports to be about the importance of picking yourself up after failure; yet the importance and prep for the impending world championships soon fade into background.

The story shifts focus from Becca’s (Kendrick) desire to pursue her dream of becoming a music producer to Fat Amy’s love life.

Then there’s the introduction of new member Emily (Hailee Steinfeld), keen to emulate her mother’s success as a Bella (and possibly to ensure continuity for a potential Pitch Perfect 3).

That said; it is down to the fact that these are such likeable and fun characters that makes the film thoroughly enjoyable.

Kendrick brings her trademark affability peppered with a little bit of snark as the young woman on the cusp of adulthood, the only one of her peers ready to break away and move on.

Wilson’s Fat Amy naturally nabs all the good gags and provokes the heartiest laughs of the piece.

It is unsurprising that she is the cause of the ‘scandal’ that causes the group’s ban (that TV news anchors dubbed the incident ‘Muffgate’ should give you an idea what it’s about).

Wilson, however, has always displayed an effortless knack of bringing warmth and pathos to her comedy, and does so here, as she realises the man of her dreams may have been in front of her all along.

The supporting cast fits in harmoniously, yet given the story focuses mainly on Kendrick’s and Wilson’s characters, they barely have the chance to shine.

Once the group gets together and sings, however... well, that is what they are there for and they do it exceptionally well.

The film once more boasts some nifty musical numbers with the addition of the rather intimidating German A Cappella group Das Sound Machine adding some edge.

Elizabeth Banks returns as the female half of the breathtakingly politically-incorrect A Cappella competition commentators; the male half played tongue stapled to cheek by John Michael Higgins, with alarmingly funny misogyny (“you’re just women,” he states, when informing the Bellas that they have been barred from future competition, “and you’ll all be pregnant soon”).