It takes effort to hold two contradictory opinions in one’s mind at the same time, acknowledging both as valid. We saw photos of the plumes of smoke above a famous Parisian skyline. After the four-letter expletives had been said (we can curse better than the French, even about their own calamities), we took a moment to react to what was doubtlessly a tragic loss to our collective cultural and architectural legacy.

Then the usual arguments commence. Instead of pouring in the hundreds of millions we need to repair Notre-Dame, why not feed the hungry? Instead of spending money on a rather hazy picture of a black hole, why not try and cure cancer? Is it possible that our species can’t hold two equivalently important things in our minds at once?

My friendly beer dealer, a man who has an encyclopaedic knowledge of the liquid and supplies a wonderful selection of brews recently added a particularly unusual one to the mix he brought over. It is a blonde in appearance and yet it’s a porter. Porters are usually very dark, so dark even their frothy head is brown in appearance. Drinking a beer that appeared light-colour­ed, and therefore more mild-man­nered, and that tastes like a full-bodied porter turned my mind inside out. Faced with a cognitive dissonance between what my eyes were seeing and my mouth was tasting required a nimbler mind than my ageing one. 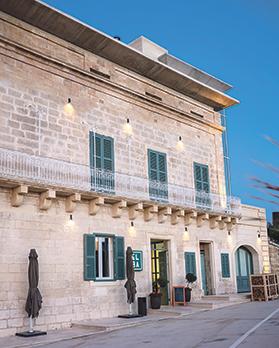 We’re just more comfortable when our senses and our experience are consistent. You’ve been to restaurants that promise one thing and deliver another. If the expectations are exceeded we’re delighted. If they don’t we’re disappointed. If we are after a surprise, then all is absolutely fine.

If you’ve experienced that edgy kind of dining that recreates a strawberry out of reconstructed olives so it looks like a false fruit and is actually made of a salty and sour olive mash, it’s actually fine. You know what you’re in for. Does it in any way improve your ex­pe­rience of an olive or of a strawberry? That’s up for debate. But it does add a level of excitement by challenging what it is we know to be true.

I had to wrap my head about a dining experience last week. I went to Elba, the fancy, new place in Baħar iċ-Ċagħaq. The 18th century villa that’s been sadly abandoned for a few decades has undergone extensive restoration and is now looking sumptuous. The façade has been lovingly restored, bits of it that probably couldn’t be salvaged have had decidedly smart intervention to restore their function, and the interior is an exercise in detail and delight.

The materials used are smart and tactile, there’s acoustic panelling and multiple floor levels, a tasteful colour palette, and even a pretty decent sound system installed. It mostly screams fine dining but then the tables are very functional, plain wood with no linen on them. The name is followed by “Pizza, pasta, and grill”. I couldn’t figure out what was going on. My eyes were seeing porter. The label said lager.

The dining area is vast and we went relatively early on a weeknight so there was only one table occupied. The man who greeted us, a gentleman in a smart suit, said we could pick a table. I did so, opting for the banquettes at the back and ignoring the fact that I’d picked a table for four even if there were two of us. What’s the likelihood that the restaurant would be packed by the time we’d finished dinner?

He was having none of my bad behaviour and pointed us in the direction of a row of tables for two. I had been justifiably chastised and felt like the headmaster had frowned at my inability to master the half-Windsor knot on my tie.

Our man brought menus and said he’d be right back to tell us what the specialities of the night were. The menus are a rather interesting take on the pizza/ pasta/grill formula. Starters like a warm octopus salad and pork head croquettes rub shoulders with the more standard fried squid and chicken liver pâté. Pasta dishes are perhaps a little more traditional, as is the list of grilled main courses and pizzas.

By now I’d half settled into the idea that we were in for a rather regular menu within a lovely restaurant. Then I opened the wine list and was quite surprised to see a number of wines priced in the three-figure region. I love the notion of indulgence that involves ordering a pizza and drinking a €300 bottle of wine but I’m not sure how much of our market gets this. Once again, my mind was struggling.

I was pretty decided on a couple of items on the menu but I was curious about the specialities. Our man was on the phone, pacing up and down the restaurant as he chatted. He put me in the mind of the French maître d’hôtel who has ably steered the dining hall for a few decades and knows he’s good at his job. If you want attention, you wait for the honour.

We eventually placed our orders for food and a bottle of Burgundy Pinot Noir. A young man, on his first day at work, brought bread and butter and then stood by while the more experienced man showed him how to open the wine. I love watching service training on the job and the young man had the right attitude. He did all he could to be helpful with us and seems to be a very quick study. Shown the ropes, he’ll make an excellent member of the front of house team.

The bread was freshly baked and delicious. Butter is the fancy sort where three quenelles (that oval made by shaping between two spoons) are served atop a slab of black rock. The butter is infused with fresh basil. Once again, fine dining material on a plain, wooden table.

The music in the background is probably terrible because I loved it. It went from Brubeck’s 1959 masterpiece to Lisa Ekdahl’s haunting vocals and then off to Robbie Williams’s swing album, with more jazz in between. There was the occasional BBC jazz radio sting to explain it. It was the perfect backdrop to the delightful wine we sipped as we waited for our food.

The pig’s head croquette isn’t the rough and ready fare I associate with this dish. It is very neatly served as three spheres of battered, pulled meat, alongside what tasted like a compote of sweetened green apple and pear. There’s everything you want from this dish, the savoury and full-flavoured unctuous meat wrapped in crunch and with an acid structure and sweet counterpoint from the compote. The only upsetting factor was that I’d agreed to share my starter with my better half. I should have ordered two of them.

Our main course was a story in two halves. The pasta is fresh so its surface is textured and there’s a pleasant bite to it. I’d picked the vongole e guanciale, a terrific idea. The result is a slightly insipid sauce, with large cubes of guanciale that hadn’t been crisped so the fat wasn’t rendered. The result is a whole lot of cubes of chewy guanciale that break your heart when you realise they’re going to be left on the plate and sent back to the kitchen.

The pizza is quite the reverse. It’s baked in a gas and wood oven so there is a hint of wood in the charred parts of the base. A masterful sourdough base hosts wild mushrooms, buffalo mozzarella, and very thin slices of guanciale that heat up to a crisp inside the fiery depths of that oven and show off what this ingredient can do when treated well. I can’t remember feeling such gut-wrenching pangs of jealousy.

We paid €40 for three dishes that can be justified by the beauty of the place, the ease with which one parks when arriving, and the serenity of the location. The food is mostly good, with the pizza being by far the crowning moment, even if the pork head isn’t to be scoffed at. Driving home I attempted to make sense of it all. Pizza, pasta, and grill are comforting and familiar dishes that are loved by most. Why should they not be treated to a beautiful location? With that worked out, I decided I’d return. I’ll go when I’m hungry enough to fill up on their pizza and then try out the grill.