On July 16, 1941, HMS Cachalot, a Grampus Class mine-laying submarine, arrived in Malta from Alexandria with a cargo of petrol, five tons of dehydrated vegetables and stores. She left the island on the 26th, with 17 bags of mail, 16 tons of stores and 10 passengers, bound for Alexandria.

Her commander, Lt H.R.B. Newton, was instructed to keep an eye out for an enemy tanker, which was on the way to Benghazi. On the evening of the 29th, an enemy merchantman was sighted through the periscope.

At sunset, Cachalot surfaced and took a course to try to overtake the enemy vessel. The plan was to dive again at dawn, ahead of the ship’s estimated track and then deliver a submerged attack. The sea was glassy calm, with patches of mist hampering visibility. Newton gave his orders to the officer of the watch, Lt R.D.C. Hart, and then turned in on the bridge, as was his habit.

“The destroyer was only 300 yards away and coming flat out, so it was impossible for the submarine to dive to safety in time”

Newton’s sleep was rudely interrupted at 1.55am by the night alarm. Hart reported a destroyer closing fast and, although Newton did not see the approaching vessel, he ordered an emergency dive. 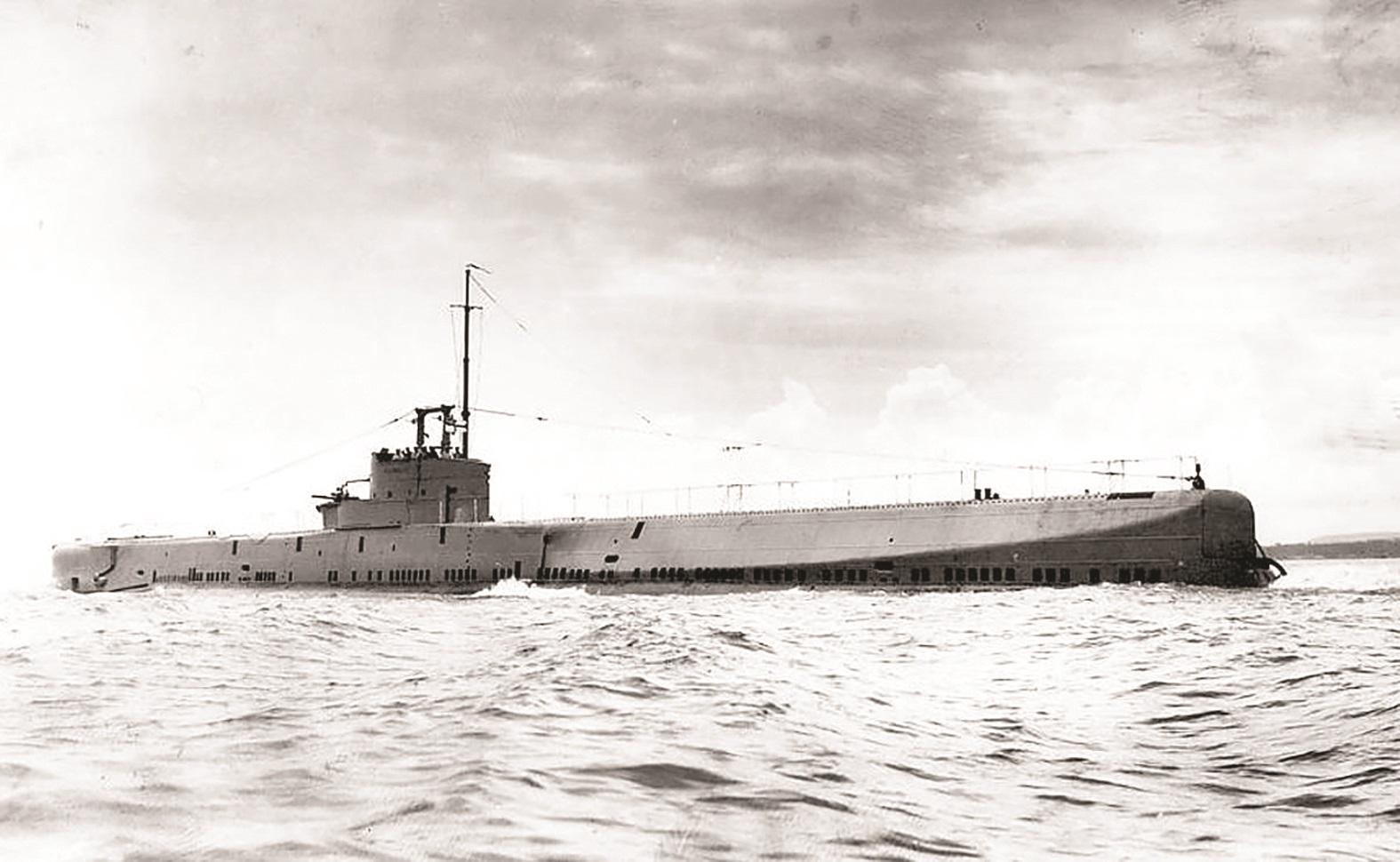 HMS Cachalot. She was actually larger than the Achille Papa, displacing 1,810 tons when surfaced, while the Italian vessel only displaced 890 tons fully loaded. Photo: https://www.facebook.com/GreyFunnelLine

When the submarine was passing 100 feet, the bow-caps were reported open. To make matters worse, the Number 5 torpedo tube drain had been left open, with water gushing in under pressure at an alarming rate. The submarine was now diving out of control, with 1,400 gallons of seawater inside the hull.

The first lieutenant corrected the trim and ordered to grouper down, that is, to connect the submarine batteries in series and,  thus, save power. It was here that another mistake occurred.

A new rating (a non-commissioned sailor in the navy), who was operating the grouper telegraph, had forgotten the telegraph on ‘grouper down’ during the emergency dive when the submarine was actually using full battery power and the telegraph should have been marking ‘grouper up’.

When the order to grouper down arrived, he looked at the telegraph and, seeing that it was already in the down position, said nothing and did not report the matter. Thus, the batteries were left connected in parallel for high performance, quickly draining their power.

A search on the hydrophones revealed no ships in the vicinity, so, after some time, the order to blow tanks was given. On surfacing, the best lookouts were ordered on deck. It was decided to continue to try to overtake the enemy merchantman, spotted by periscope the evening before, for another hour and, at the same time, recharge the batteries. If the ship was not sighted by that time, the chase would be abandoned as dawn was now only three hours away. 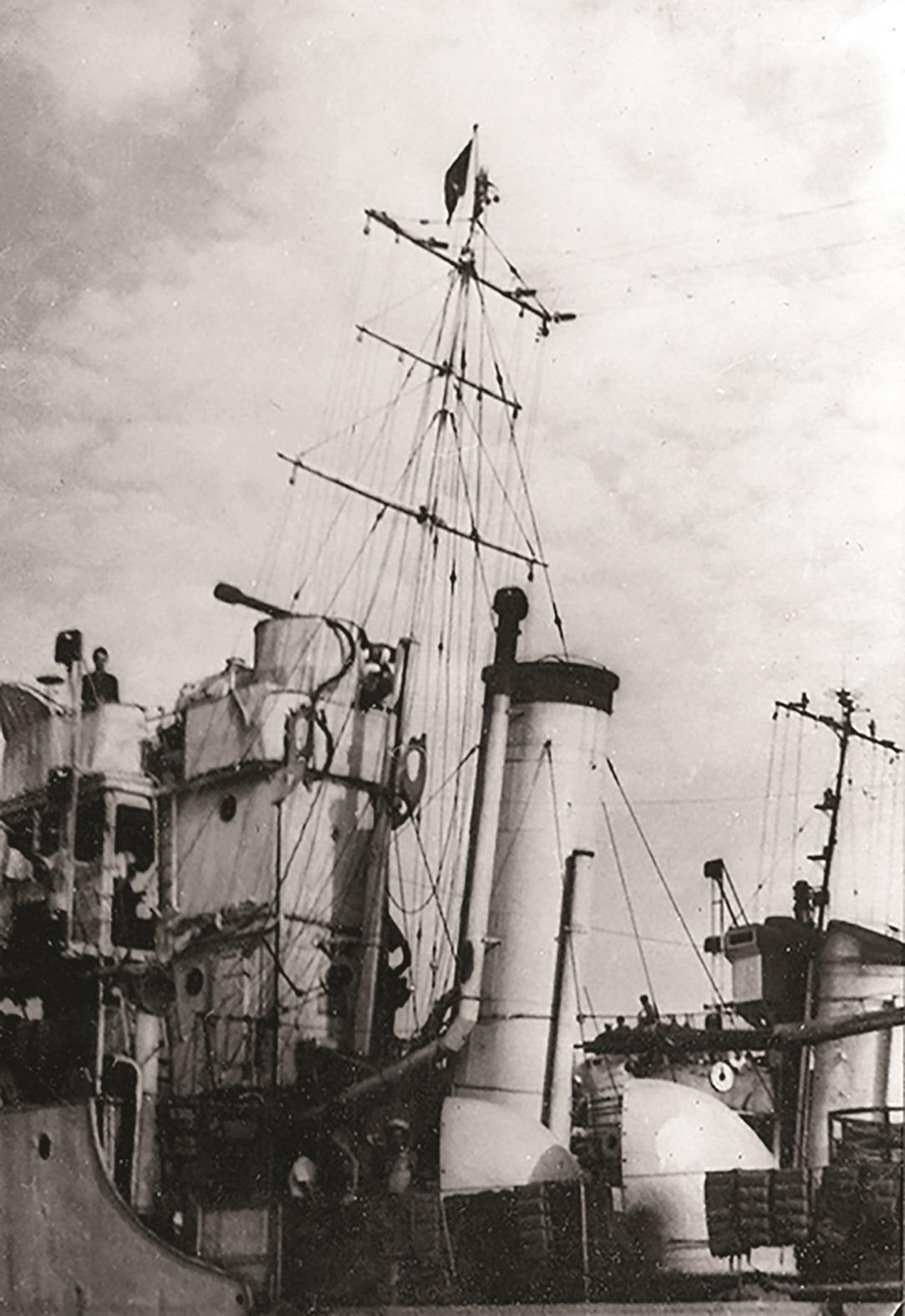 After 45 minutes, Petty Officer Davies caught sight of an enemy tanker 1,500 yards (circa 1,370 metres) away. Just half a minute after the sighting, the ship made smoke and changed direction. Assuming Cachalot had been spotted, Newton decided to give chase, at the same time ordering the lookouts to keep their eyes peeled for the destroyer, which he presumed must be lurking in the vicinity. The tanker kept disappearing in the mist and,  in order to try and slow it down, Newton ordered the gun’s crew on deck.

The ship was sighted again from the bridge but, as the sailors manning the four-inch deck gun could not see it, the commander gave range and direction and the men fired blindly. 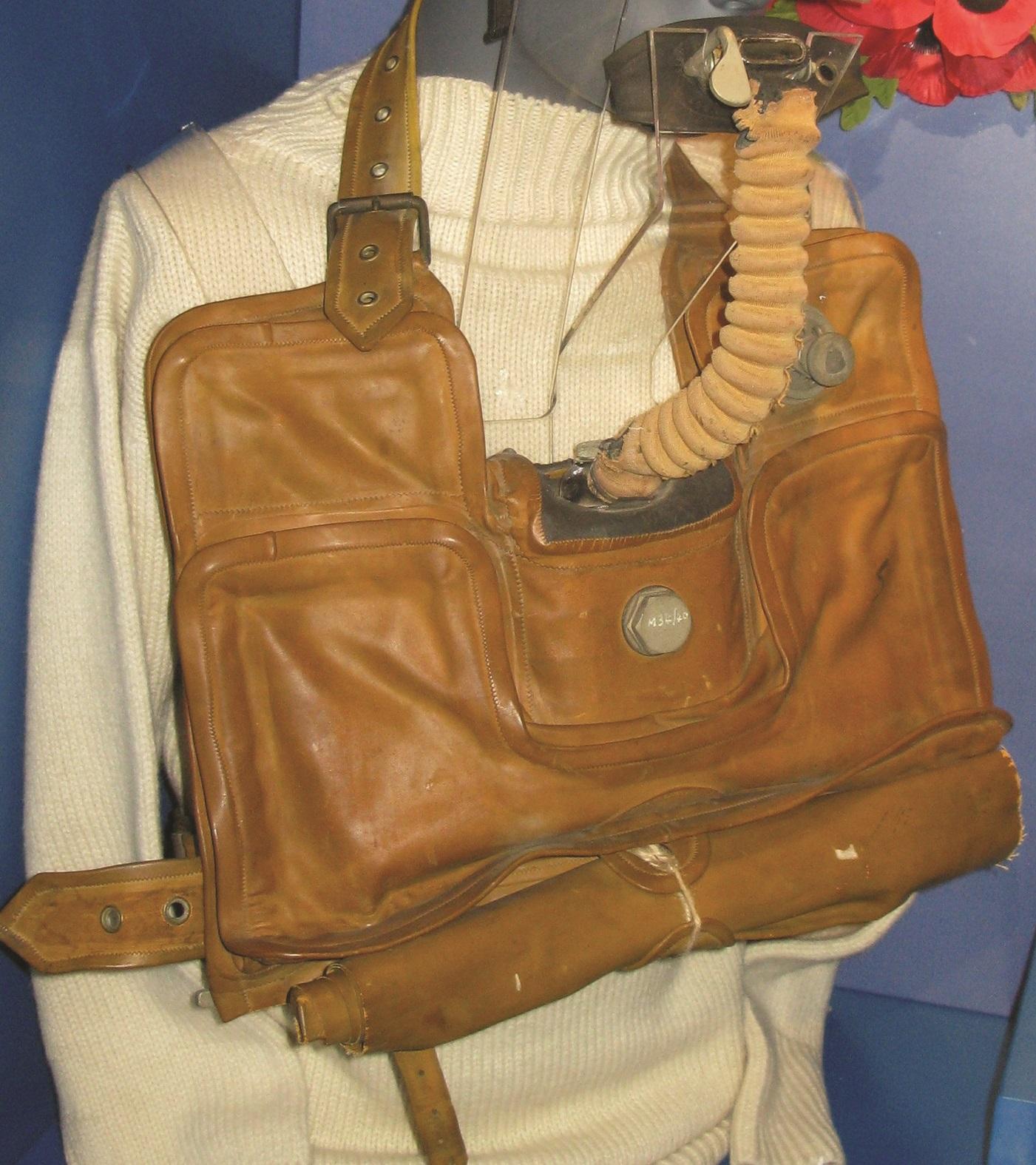 A Davis Submerged Escape Apparatus, an early type of oxygen breather. Maltese steward Giuseppe Muscat was supposedly wearing one when he was last seen on board the HMS Cachalot. Photo: Wikipedia

After the fourth round, the gunners finally spotted the tanker in the haze and continued firing independently. The 11th shot seemed to be a hit as thick clouds of smoke started emitting from the target.

The tanker, still belching smoke, veered towards them, as if coming to ram. Cachalot turned away from the threat and the tanker disappeared again, hidden in the billowing smoke.

Then, a minute later, a destroyer appeared out of nowhere, coming at full speed towards the submarine. A blast of a whistle ordered the gun crew to hastily clear the deck and scamper below but, in the frenzy, a jam occurred in both the upper and lower hatches. The destroyer was, by now, only 300 yards away and still coming flat out, so it was impossible for the submarine to dive to safety in time. Newton, now alone on the bridge, gave the order to abandon ship.

Lt Commander Gino Rosica, the captain of the Italian destroyer, realised that the submarine was going nowhere. Not wanting to collide at high speed with the submarine, which was actually larger than his vessel, he ordered full astern. The Generale Achille Papa rammed the Cachalot at four knots, puncturing one of its tanks. 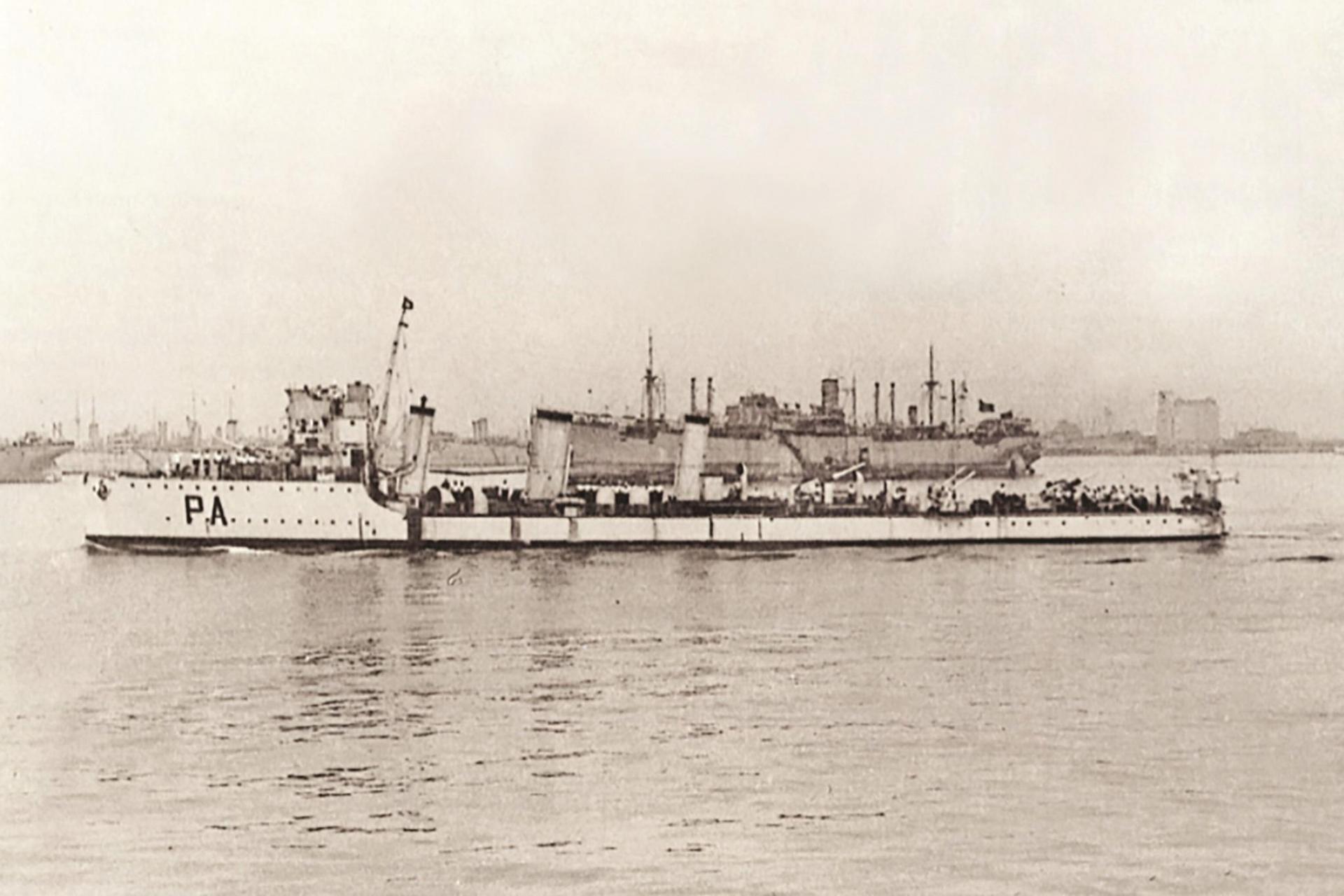 An attempt by Newton to try to get away was foiled when the enemy destroyer opened up with its anti-aircraft armaments. All the shots went high, as the enemy gunners were unable to depress their gun barrels sufficiently. Newton, realising that the game was up, flashed a signal at the enemy ship to discourage further firing and ordered the main vents opened.

“The passengers on the submarine were also all picked up, except for Maltese steward Giuseppe Muscat”

The Papa launched boats to pick up the submarine’s crew, who were all saved. None of the 10 passengers on the submarine could swim but they were also all picked up, except for Maltese steward Giuseppe Muscat. He had been fitted with a Davis Submerged Escape Apparatus (an early type of oxygen rebreather invented in 1910) to help him keep afloat and was last seen on the deck of the sinking submarine making the sign of the cross.

On board the Generale Achille Papa, Newton found out that there was no tanker in the vici­nity. They had been firing at the destroyer all the time! The Italians only realised they were being chased by the Cachalot when two shells whizzed bet­ween the funnels of their ship. 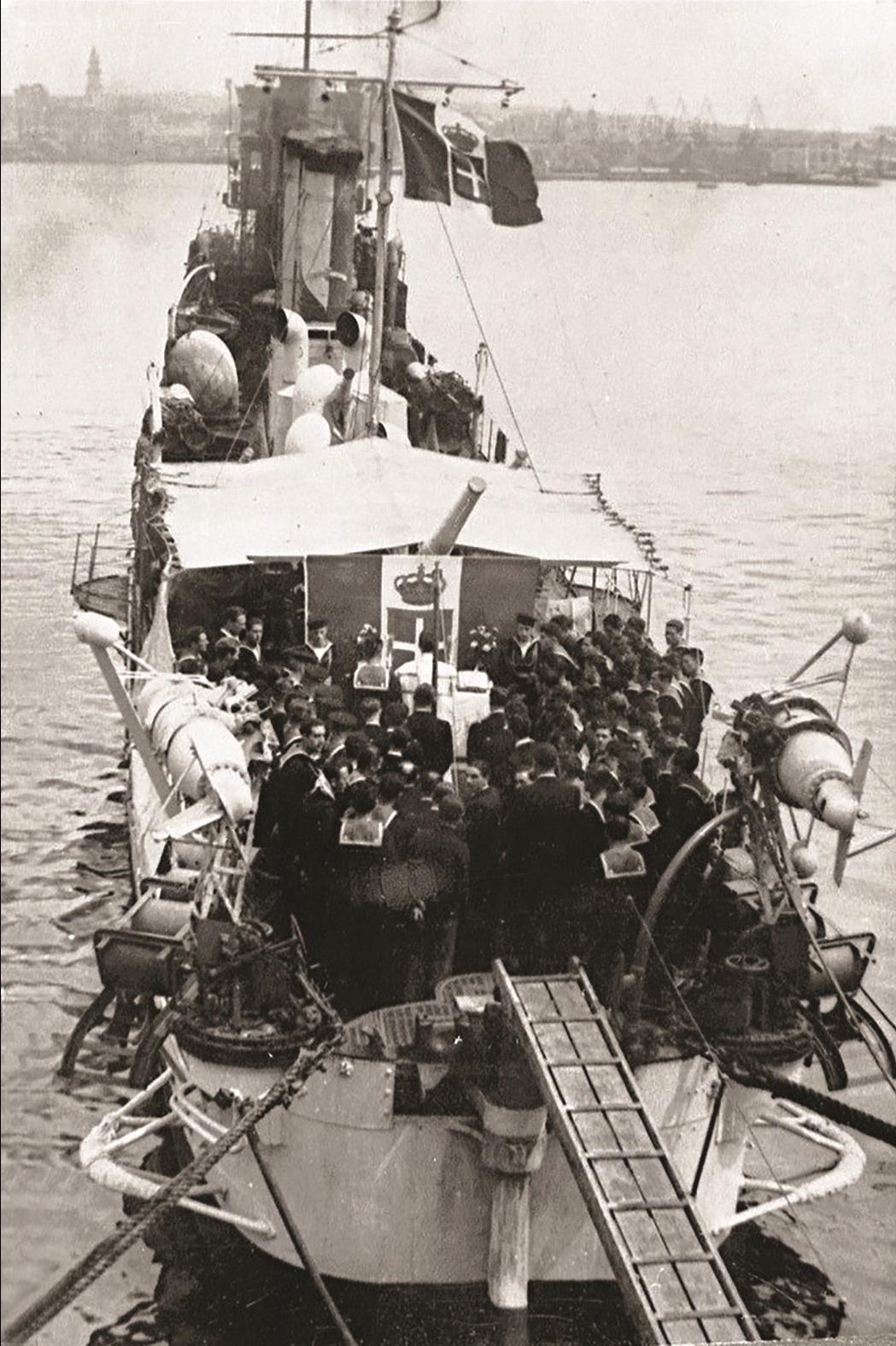 The Generale Achille Papa was launched in 1921 as a destroyer and had actually been reclassified as a torpedo boat in 1929. The Papa was scuttled at La Spezia in September 1943, when Italy surrendered. The Germans raised it, only to sink it again as a blockship at Oneglia in 1945.

More information can be found in Beneath the Waves by A.S. Evans. 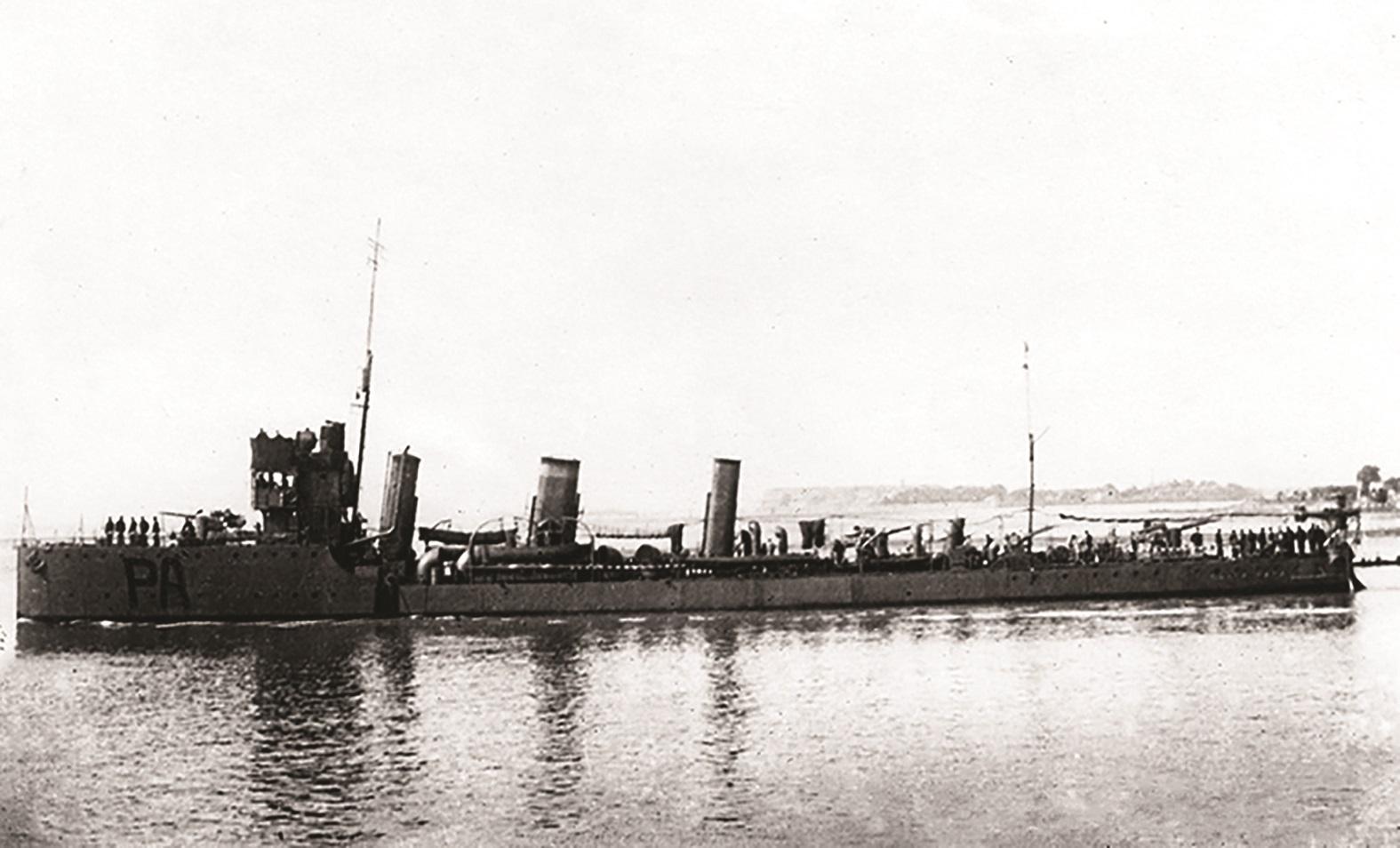 The Italian destroyer Papa in 1928. In 1929, being obsolete, all destroyers of the Generale class were reclassified as torpedo boats. Photo: http://conlapelleappesaaunchiodo.blogspot.com/