In the seventh article in a series on 20th-century artists who shaped Maltese modernism, Joseph Agius delves into the enigmatic world of Josef Kalleya.

Josef Kalleya (1898-1998) is undoubtedly one of the most enigmatic figures in the history of Maltese 20th- century art. His position as one of the two fountainheads of Maltese modernism, together with Carmelo Mangion (1905-1997), is undisputed.

A mixture of asceticism, spirituality, controversy, literature and theology come together in a universe that has no equivalent in our island’s art history and that marks him as an innovator even in the more general backdrop of international 20th-century art.

Born in Valletta on March 27, 1898, Giuseppe Calleja received a formal education which ensured him of a fair degree of literacy. He had to change his name a couple of times along the years; first to Joseph Calleja to avoid confusion with the Maltese Nazarene painter bearing his same name. In the 1950s, he coined the name Josef Kalleya to avoid confusion with another Maltese artist, who was also a member of the three Maltese art groups of the 1950s. Besides, there was another Joseph Calleja (known also as Joe Calleia), who was a very successful Maltese actor and a star of Hollywood’s silver screen. 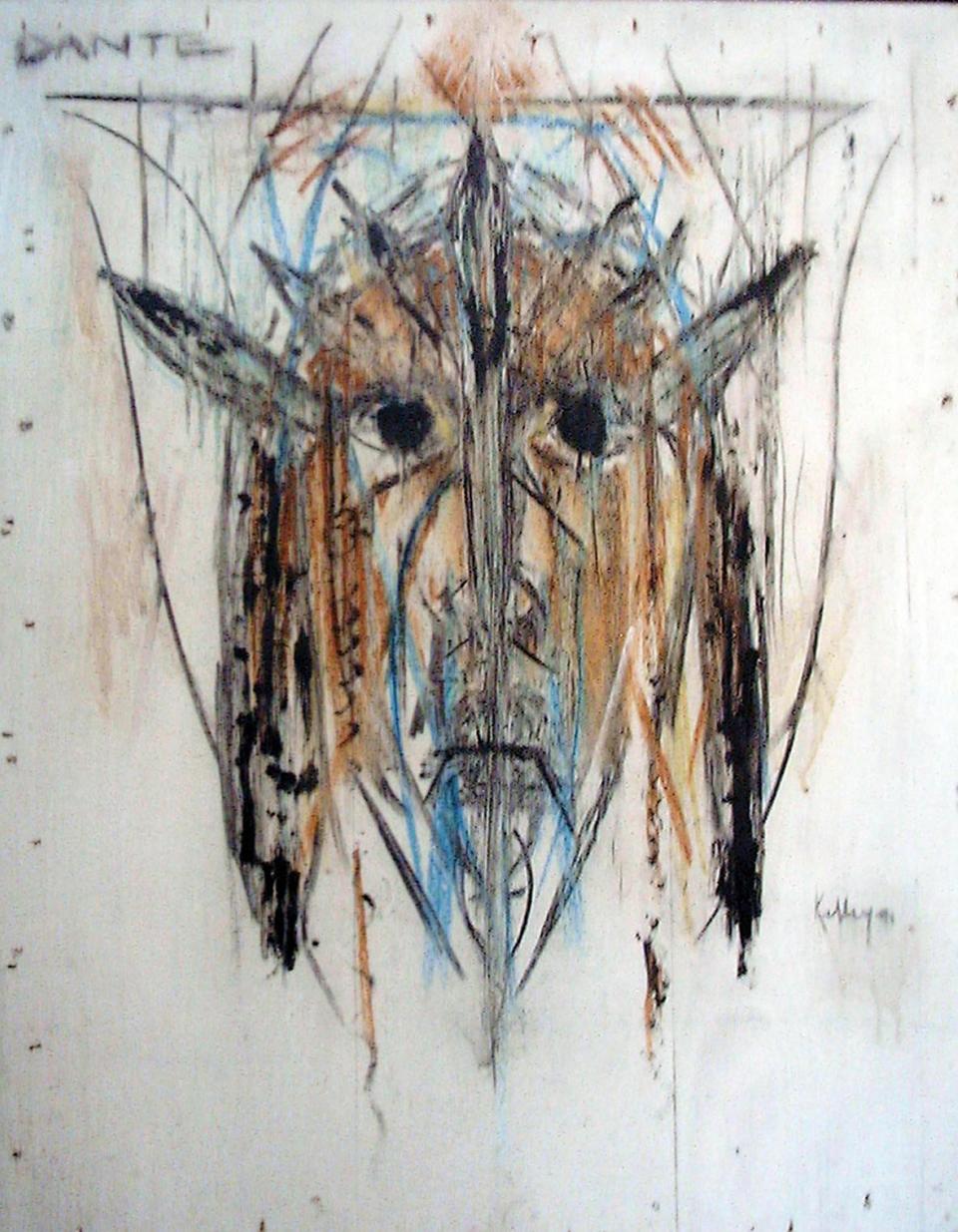 Kalleya was involved with a theatrical group L’Avvenir Infantile, the brainchild of youngsters of his age group. The theatrical company adopted a Commedia dell’Arte approach and a more improvisational outlook towards performance.

In his teens, he developed an interest in sculpture, painting and drawing.  He sought proper instruction through Antonio Micallef, Lazzaro Pisani and Edward Galea. An apprenticeship with Giuseppe Duca and Ignazio Cefai exposed him to commissions to these artists originating from the Church and other patrons. Kalleya himself was personally commissioned for a pair of angels that were intended for the Ta’ Pinu Sanctuary in Gozo but the project got shelved as Kalleya’s idea for them was deemed to be too modern for the taste of the patron. 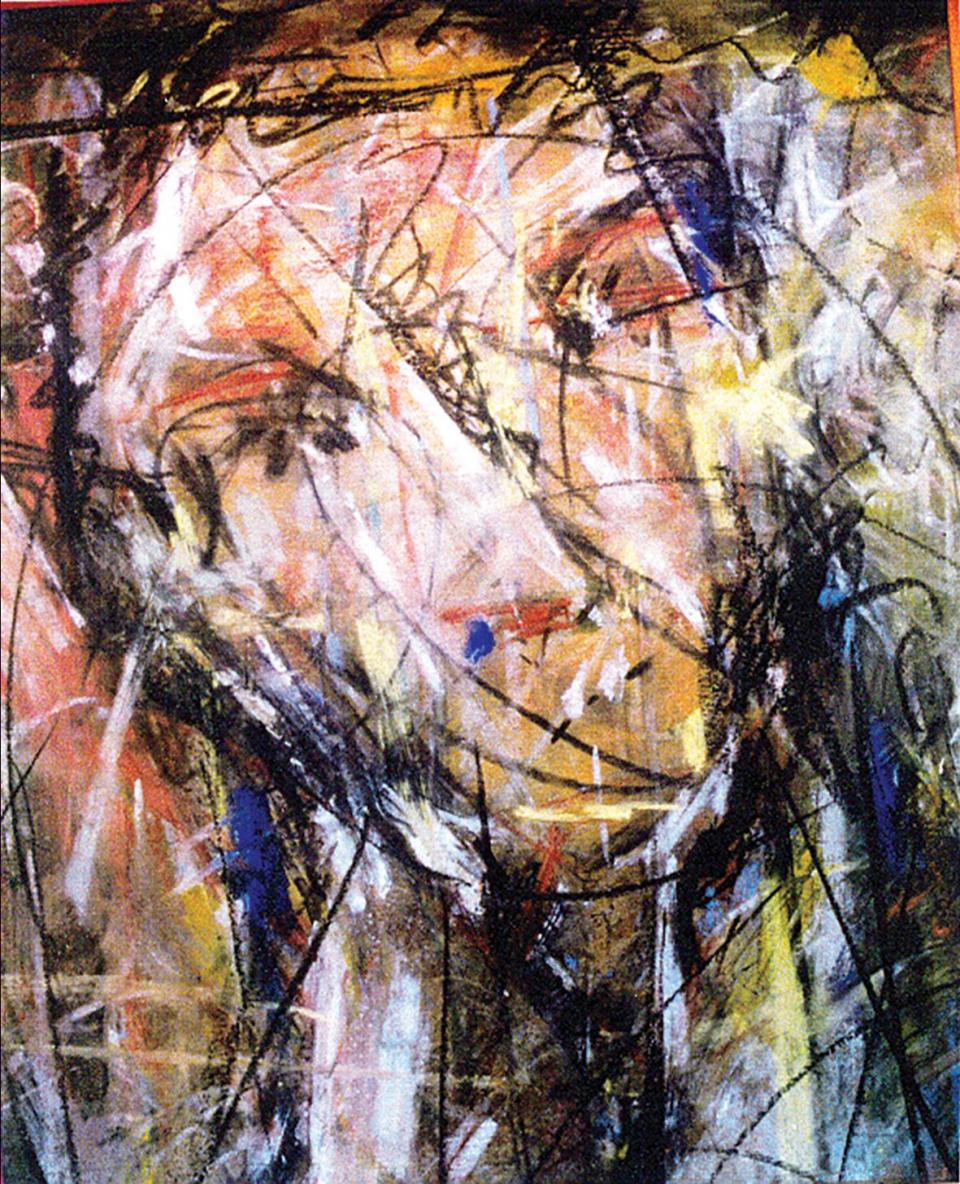 The young artist’s meeting in 1913, or thereabouts, with Dun Ġorġ Preca, a then young priest who founded the Catholic society known as M.U.S.E.U.M., was a life-changing episode. He became a fervent member of this society. However, his progressive views antagonised the ethos of the group. Eventually, by mutual consent, it was decided that he had to leave. But even in later years, he still felt not completely detached from the teachings of Dun Ġorġ as their relevance to him ran more than skin deep.

The Church fuelled his spiritual needs although he felt at times to be at odds with its teachings. Its promise, its panacea of eternal salvation for its obedient flock, jarred with the eventuality of eternal damnation for ‘heretics’ who revealed and believed in an alternative path to universal redemption. 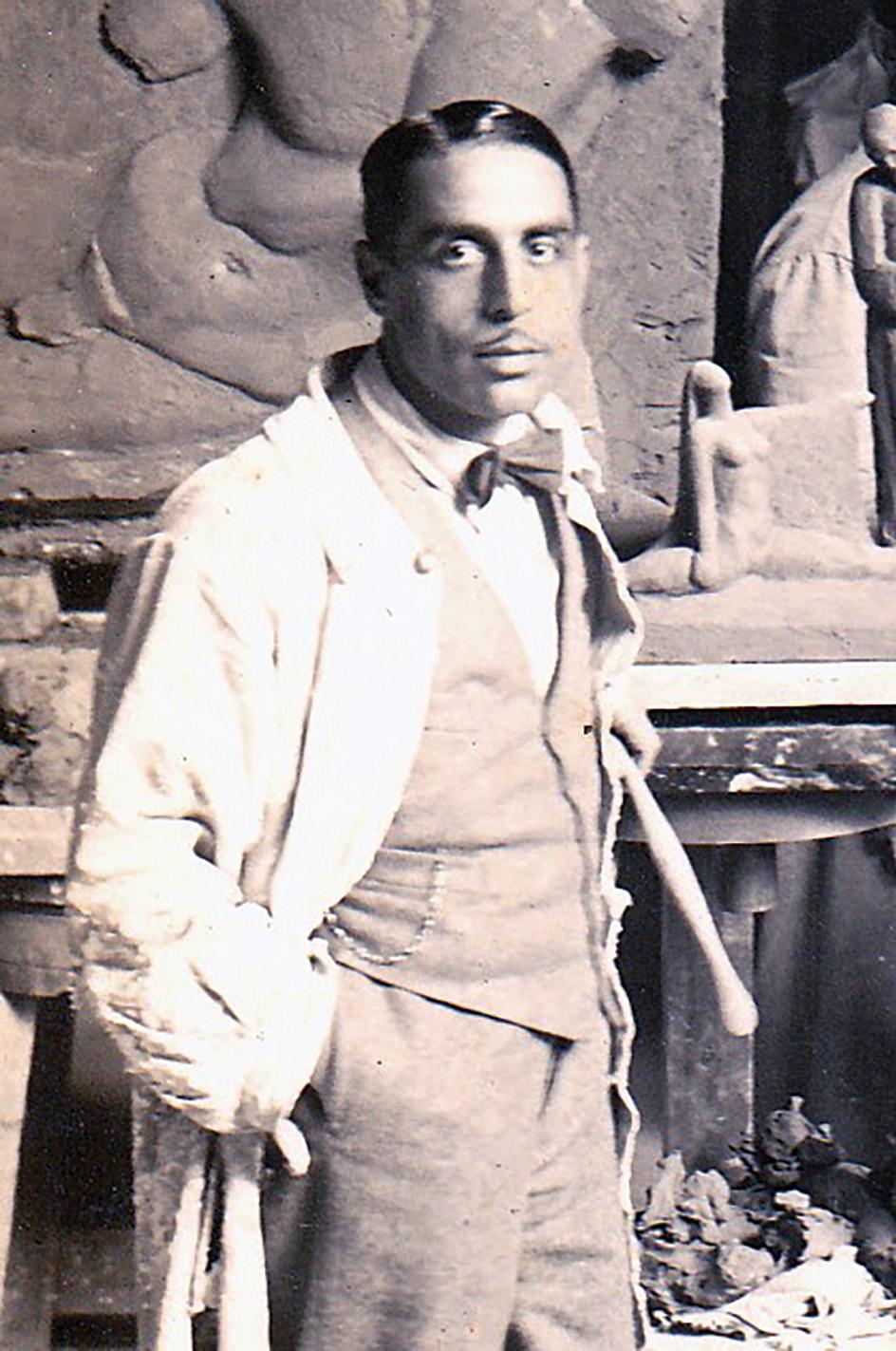 Josef Kalleya as a young man.

The first seeds of Apokatastasis, the doctrine of Origen, had probably already been sown. This eventually flourished as the underlying concept that is the root of what Kalleya and his art are all about. Origen was an early Christian ascetic and theologian who postulated that there will be a universal non-exclusive redemption at the end of time, one that would also include Lucifer. According to Origen, all souls that have gone astray will be restored, sooner or later, to God’s embrace.

Kalleja was nearing his 30th birthday when he realised that his career as an artist here in Malta was stuck in a rut. At a rather mature age, he enrolled at Rome’s Regia Accademia di Belle Arti, the Regia Scuola della Medaglia and the British Academy, which were also situated in the Italian capital.  During his stay in Rome, he met his future wife Elsa Ornaro, who was 20 years younger than him and whom he married just before returning to Malta.

He weaved a language that curbs misinterpretation

Once back, he transformed his small Valletta studio into an artistic venue which served as a meeting place for other artists and like-minded souls. This same place was also the site of the Libera Scuola del Nudo, which offered nascent Maltese artists the opportunity to study and paint nudes from life models rather than from plaster casts. This experiment was short-lived as the intransigent Maltese Church fell on it like a ton of bricks after receiving complaints from neighbours of the Scuola about the ‘nefarious’ goings-on. 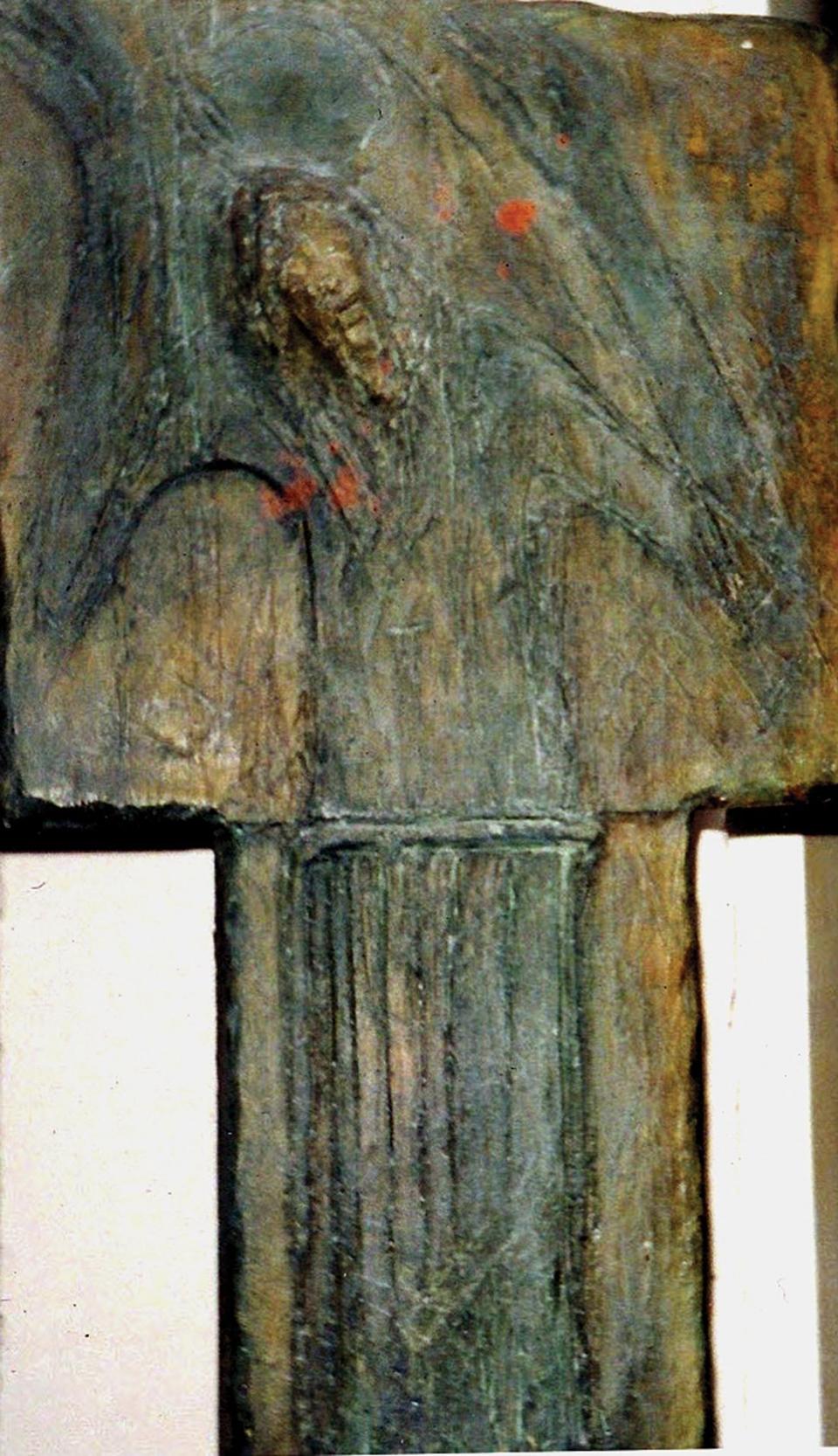 The Agony of St Francis

Various sculptors as diverse as August Rodin, Alberto Giacometti and Henry Moore have been mentioned by Maltese art historians as possible sources of inspiration for Kalleya. However, the sculptor that bears most resemblance in some concepts and execution is Medardo Rosso (1858-1928). Kalleya must have come across his work while in Rome.

The Italian sculptor’s rough and spontaneous modelling is reminiscent of the Maltese artist’s technique. Rosso’s and Kalleya’s sculptures appear to be deceptively unfinished, scratched, amorphous, primordial and magma-like, as though they are gestating towards other undetermined forms. These in-between states straddle the gap between the abstract and the representational.

Kalleya’s work on paper, particularly that of the 1970s, demonstrates a Medardo Rosso sensibility as the Maltese artist introduced self-explanatory Cy Twombly-like text (which is also present in an early and 1935 work) to indicate the origin and philosophy behind a piece, as an aid in the deciphering of concepts and themes. Rosso also used photography as a medium of expression and linked it with his sculptural work.

Kalleya employed this technique too to give geographical context to his monumental creations in the vain hope that they would perhaps one day adorn public spaces; sadly, none of them ever did. He also photographed his sculptural work in plasticine to give a measure of permanence and posterity as he reused the same stock of material for other sculptures, resulting in their destruction. This ephemeral quality, this impermanence defines the sculptural output of the artist, some of which there is no further documentation of besides the photographical one as the same material had been kneaded and remoulded innumerable times. He was also known to leave the moist sculptures outside in his yard to be burnished come rain or shine.

The contextualisation, via his photographs, of extraordinary but improbable monuments in the spaces for which he conceived them, as well as the explanatory texts that accompany his paintings and works on paper, can be seen as Kalleya’s utmost effort to document his self-expression for posterity. Thus, he weaved a language that curbs misinterpretation.

Twombly’s scribbles are at times unintelligible, structureless and lack meaning as the message can be hard to decipher; at other times, the American artist tickles the viewer’s fancy by dropping a bombshell of bold text amid a landscape of scribbles, drips and blotches of colour.  Kalleya stolidly delivers his Neoplatonist message of Apokatastasis and announces, like a playwright, the name and nature of the protagonists and their relationship to each other and his interpretation of them and their relationships.

Therefore, Jesus Christ, Lucifer, Origen, Dante Alighieri and his La Divina Commedia, John Milton and his Paradise Lost, Paradise Regained and Giovanni Papini’s writings all play a vital role in this amalgam of theological and diverse literary sources that Kalleya the alchemist weaves into a very personal and unique viewpoint of creation, redemption and salvation. Papini was an Italian novelist/journalist who was an atheist, but later in life, converted to Christianity.

As expressed by Dominic Cutajar in his essay on Kalleya: “It is thus not a coincidence that most of his sculptures have a clear spiral form, a twist that rotates upwards, similar to the spiral vortex believed by the Neoplatonists to lead all matter back to God, its origin and source.”

Kalleya’s art can be perceived as a quest, a prayer for an ultimate redemption and salvation that is universal and is non-exclusive – a cosmos that resolves all chaos and that includes all, even Lucifer himself.

He lived to a ripe old age of 100, to be comforted on his deathbed by his wife, his numerous children and grandchildren.