England Insurance Agency was established in 1981 in line with new legislation and previously operated under different names. e agency is now in its third generation and is also in its 24th year as agents for Mapfre Middlesea plc, which makes it one of the longest-standing agents.

“England Insurance Agency is a small family-run company,” Peter England, director at the agency, says. “We invest our time in giving our clients a great experience in insurance by giving a personalised, one-to-one service. By dedicating time to clients, we learn more about each other and focus on the needs and coverage required.

“We do not hard sell. Rather, we make sure our clients are well informed about coverage and exclusions. Through on site visits we also guide clients in how to insure, their options, and go as far as giving some health and safety guidance.”

In 2015, England Insurance Agency engaged in a rebranding exercise. The three-lion crest was replaced with one lion, which projects strength, while the word ‘England’ was enhanced, in line with the agency’s experience and its slogan: The Strength of Experience.

We make sure our clients are well informed about coverage

“We also revamped our website and made it mobilefriendly,” England adds. “Moreover, we are the only insurance website in Malta that provides an audiovisual explanation of coverage on various products.”

Last year was unusually turbulent for the local insurance sector.

“We enjoyed steady growth but there were also some surprises,” England says. “In fact, 2015 saw the fall of a local insurer, which never happened before in the market. It also saw other insurance agencies turn to Mapfre Middlesea for support following withdrawal of foreign players from the market. 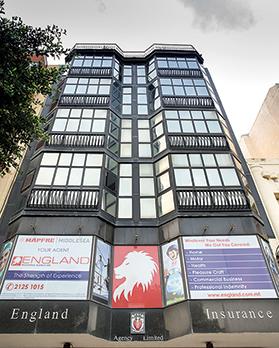 “In 2015, the industry continued to grow in various fields and also developed new and innovative products. The same year gave the market a deteriorating loss in the motor market despite all efforts to constrain fraud and cost-saving initiatives. Unfortunately the frequency and severity of motor accidents continued to escalate, while the increase of high tech cars on our roads are definitely affecting claims costs. On top of that, a five-minute hail storm in October continued to elevate motor losses in millions of euros.”

England looks at 2016 with optimism.

“This year must start a turnaround on motor insurance and reinstate loss harmony in this area. Definitely the budget incentives for scooters will result in a heavy increase of these vehicles on our roads and we hope that Transport Malta will look into a campaign to promote scooter and motorbike safety.

“This year will surely build an interest and culture in private pensions plans for which the government has also launched fiscal incentives. Private pensions plans are being tackled by our sister company William J. England & Son Limited, which acts as intermediary for MSV Life.

“This month England Insurance Agency sponsored the Audi Malta Motorsports Awards. By supporting a sports event, we firmly believe in supporting a discipline as this creates self-regulation to the rules of the sport and club. We also support and appreciate the efforts being made by the Malta Motorsports Federation to train and educate its members, which in turn will change and improve the culture.”