Liza Ciantar gave birth to her daughter unexpectedly in her mother’s tiny spare toilet. Antoinette Sinnas gives a blow-by-blow account of baby Sarah’s surprise and dramatic arrival, and how the family coped with the panic situation, blessed as they were with the ability and power to bring a new life into this world despite no medical background and midwifery skills.

Already a mum to one, Liza Ciantar was pretty sure she would know when it was time to head to the hospital to have her baby. But her second bundle of joy had her own little plans to make a surprise entrance – and quite a dramatic one at that!

February 19, 2019, seemed like any other day for Liza, 30, and her mum Grace. But little did they know that what would happen that day would make it the most empowering and profound experience of their lives.

Liza had had a very problematic pregnancy throughout. With growing fibroids and polyps, she was no stranger to the obstetrics ward at Mater Dei. A day before she gave birth, she attended her weekly hospital appointment and the possibility of a C-section was laid on the cards.

The following day, Liza visited her mother in Msida. After a light lunch, she was tempted to have a siesta, so she decided to snuggle up with her three-year-old daughter, Amy. Moments later, however, she felt a strong jolt in her lower abdomen. She sprung up and rushed to the spare toilet.

“I hadn’t experienced my waters rupturing with my first pregnancy, so I did not know what to expect. I suddenly noticed a huge gush of fluid, which went all over the toilet,” she recalls.

Liza now established she was in labour. She quickly spotted her mobile, phoned her husband and told him what had just happened.

In the meantime, her mum helped her into the shower so she could freshen up before heading off to the hospital. But while in the shower, Liza felt an extreme surge of pressure. It was a disassociated sensation and she did not know whether she had to use the toilet or whether she was in transition. 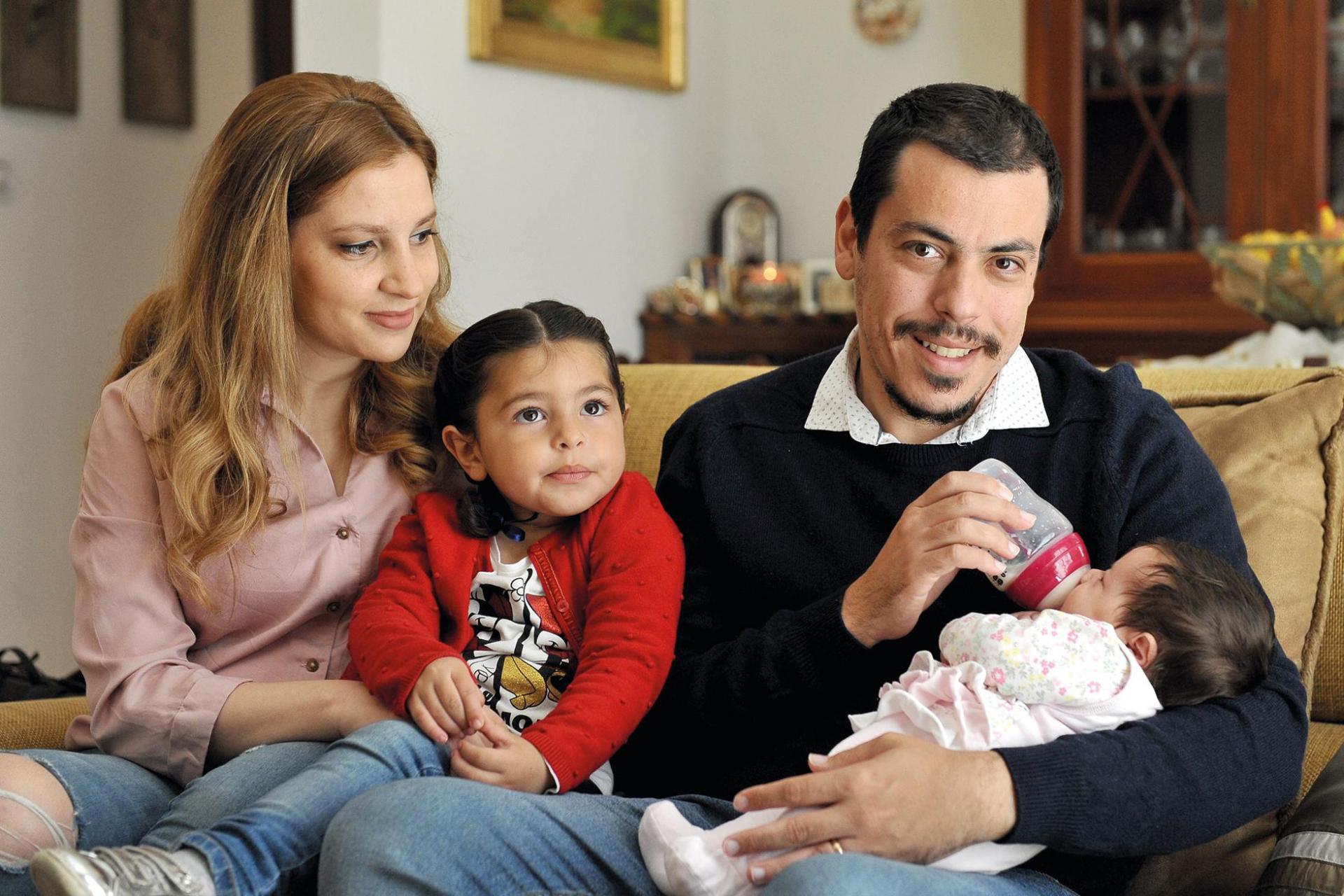 “With just a towel wrapped around me, I rushed back to the spare toilet and asked my mum to call for the ambulance as I didn’t think my husband would make it in time. He had to leave work, go back home to collect the hospital bag and head to my mum’s place.”

Totally panic-stricken, Grace failed to remember the emergency number. Liza shouted it out, number by number, until Grace managed to dial through. While on the phone with the hospital, Grace scrambled for garments and underwear that would fit Liza because she had no change of clothes with her.

“I couldn’t wait for these and asked my mum to help me put on any clothes she had, regardless of whether they would fit. I was feeling so incredibly hot and I wanted to put my hair up in a bun. My mum went looking for a rubber band to tie my hair up. She rushed back with one, and while tying it, it snapped!

Liza recalls shrieking: “Nothing is going right today!” And her voice echoed throughout the apartment.

With all the commotion, Amy woke from her afternoon nap and began wailing, sensing the panic around her. Grace didn’t want her granddaughter to be traumatised, so she closed the bedroom door. She then frantically made another call for the ambulance, while shuttling back and forth from room to room, reassuring Liza and trying to calm Amy.

Suddenly, they heard knocking at the front door. As luck would have it, it was Grace’s other grandchildren. In walked two more toddlers along with her son Matthew. Grace hastily ushered Matthew and his kids into the room Amy was in and asked him to babysit all the children.

While Liza was on the toilet, she reached down and could feel her baby’s head slowly emerging. “I could feel she had hair and remembered that Amy was also born with hair. I remember screaming: ‘I can feel her head; she’s crowning!’ Now, I really began to freak out.”

Reality suddenly hit. Liza realised the inevitable was happening. Her baby was coming, and it was coming at that very instant! After a split second, she felt gravity pull her baby further down. Her body was on overdrive. She carefully hoisted herself off the toilet and held the baby’s head with both hands, trying to balance herself between the toilet and the sink. The spare toilet was tiny. “I couldn’t have found a smaller space to go into labour in,” Liza laughs.

Grace turned on the heating in the whole apartment and rolled down the blinds. She then rushed back with a towel and squatted in front of Liza ready to catch the baby. At that point, Liza’s husband walked in and looked at the two, totally flabber­gasted. There they were, doing everything alone, giving birth and riding the waves. Liza will never forget the look of fear on Grace’s face.

“I then felt an intense urge to push. I stood there with my body contorted in unbelievable pain and my legs trembling. God help us!”

With one massive push, the baby slid out, safely landing in Grace’s hands. At 4.15pm baby Sarah Ciantar entered this world, weighing in at 7lb 0.2oz. The first thing they noticed was that she was pale and didn’t give out a loud cry, but just a quiet whimper. Grace placed baby Sarah on Liza’s chest as she perched herself back on the toilet, carefully holding her newborn and trying not to break the umbilical cord, which was still attached.

The paramedic and midwife finally arrived and were surprised that the baby had already been delivered. They carefully clamped the umbilical cord, after which Grace handed over baby Sarah to her son-in-law, Darren, who was still under shock. 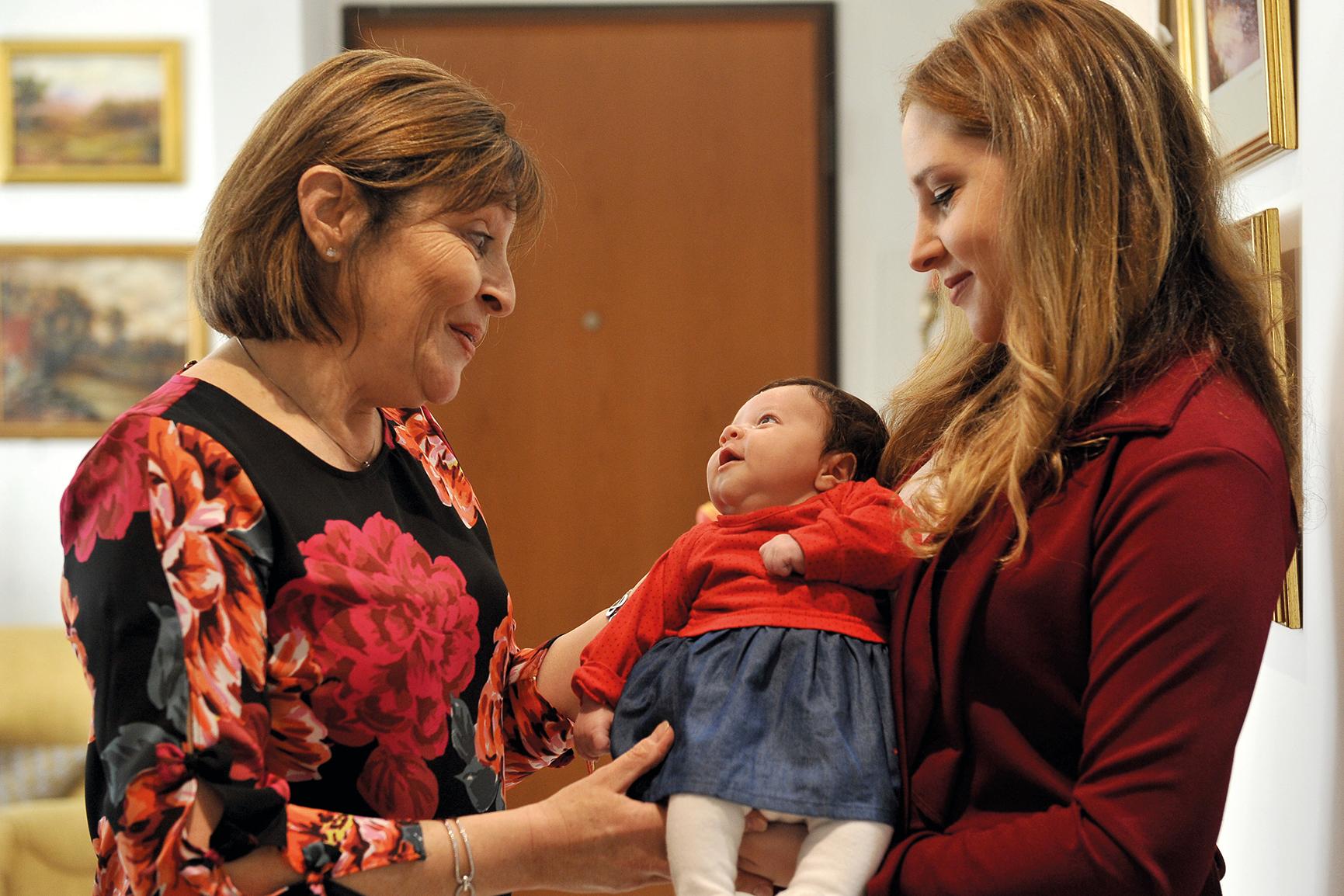 After a moment of hesitation, he held his daughter for the first time. Little Sarah then made her way around the family until Liza had her placenta expelled, lying on the bare floor, propped up by a couple of pillows. The midwife packed the placenta and gave it to Grace to dispose of.

Liza was still in a haze, but mustered the energy to make her way down to the ambulance. Without a wheelchair, or a stretcher, she had to carry her newborn baby down, swaddled in a towel.

“I was so exhausted, I walked out of the apartment block in my mum’s dressing gown and bathroom slippers. All the commotion attracted many onlookers. As I inched my way into the ambulance, our neighbours waved out to me from their balconies,” says Liza.

The bumpy ride to the hospital was an epic journey. Liza had to feed her baby for the first time sitting up on a stretcher with no seatbelt. Dazed and confused, she knew she had a task at hand and successfully managed to do it. As soon as she reached the hospital, doors flung open in front of her and she made it to the delivery suite.

After Liza was ready to be shifted to the ward, the baby was taken along with her husband to be checked. “Our concern was that three hours had passed, and no medic had seen the baby”, says Liza. But thankfully, she was a healthy girl.

After retiring to the ward, Liza couldn’t believe she had done it. Both she and her mum were blessed with the ability and power to bring a new life into this world in spite of having no medical background, or midwifery skills whatsoever; just faith and trust in God. They managed to deliver a baby completely unassisted and unmedicated.

“Neither Sarah nor I suffered any complications in the hours or days after birth,” Liza points out. But never in their wildest dreams would they have imagined this scenario.