After hiking for hours across the mountain and a vast expanse of white, Swiss glaciologist Matthias Huss crouches down near the middle of the massive glacier and checks the measurements.

Analysis of the data gathered from Aletsch, the largest glacier in the Alps, paints a dire picture of the toll that climate change is taking on the behemoth.

Aletsch glacier alone holds about a fifth of the total ice volume found in all of Switzerland’s around 1,800 glaciers.

Matthias Hüss is at the forefront of observing the impact of climate change because glaciers are like a "giant thermometer" that indicates that upheavals are "very, very fast." Video: Eloi Rouyer / AFPTV/ AFP

"But over the past decade, the glacier consisting of some 80 square kilometres of ice and rock has seen 1.5 metres shaved off its thickness each year."

But over the past decade, the glacier consisting of some 80 square kilometres of ice and rock has seen 1.5 metres shaved off its thickness each year.

A cubic kilometre of ice has also melted away during the same time period.

The 41-year-old heads Glacier Monitoring in Switzerland (GLAMOS), a scientific network documenting the shrinking of the Swiss glaciers in the face of a warming planet.

“The glaciers are truly a giant and visible thermometer,” he said, pointing out that it is “much more poignant to see a glacier shrinking in volume and thickness than to look at a graph showing temperatures rising.” 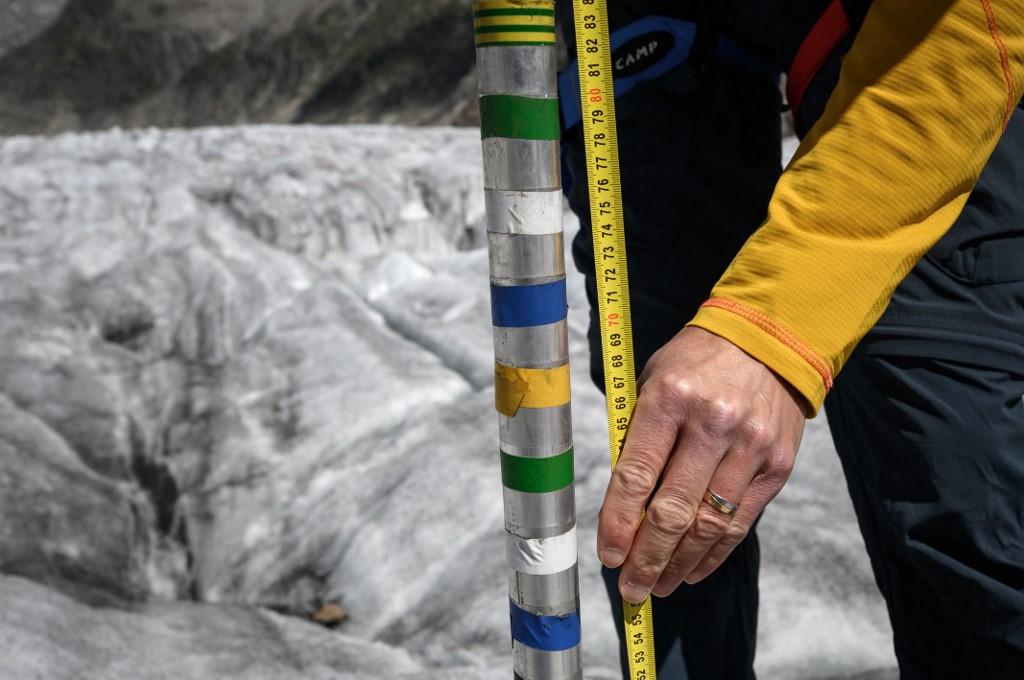 “Glaciers are beautiful,” he added, accounting for the often emotional response when people reflect on the shrinking and future disappearance of the ice formations.

GLAMOS scientists monitor around 20 Swiss glaciers each year and have noted that since 2010, the frequency of years with extreme ice loss has accelerated dramatically. 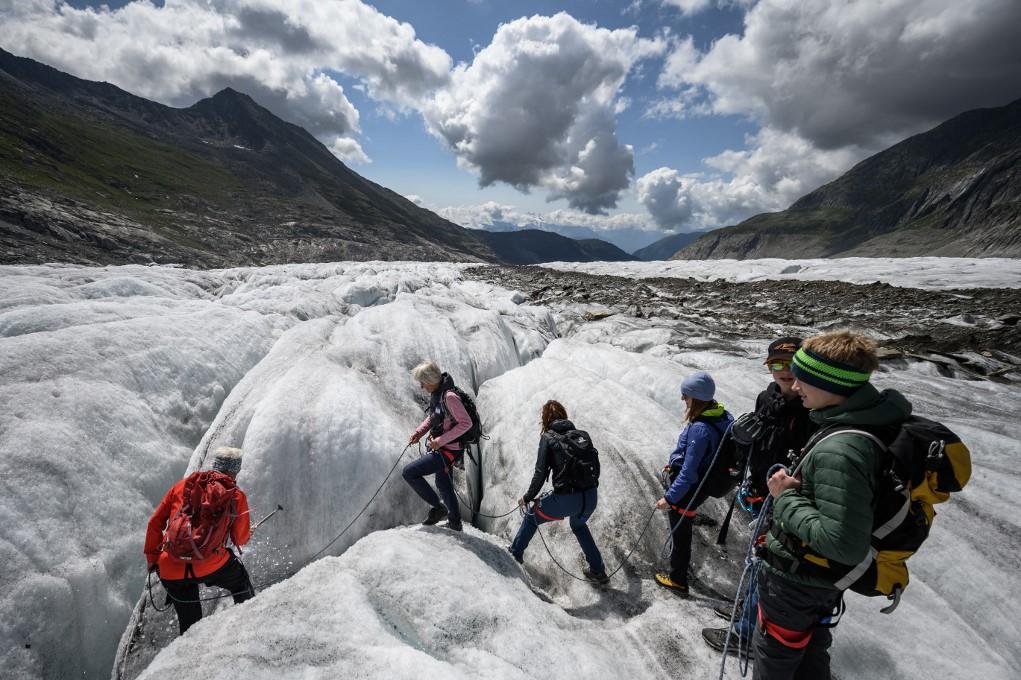 Teenagers walk on the Aletsch Glacier during a visit with Swiss glaciologist Matthias Huss (not pictured) on August 25, 2021. Photo: Fabrice Coffrini / AFP

While last year was not a year of extremes, Swiss glaciers still shed two per cent of their total volume, Huss said.

And this year, the negative trend will likely continue, despite heavy snow and a relatively cold winter, he added.

Global warming is going so fast that a number of smaller glaciers have already disappeared. 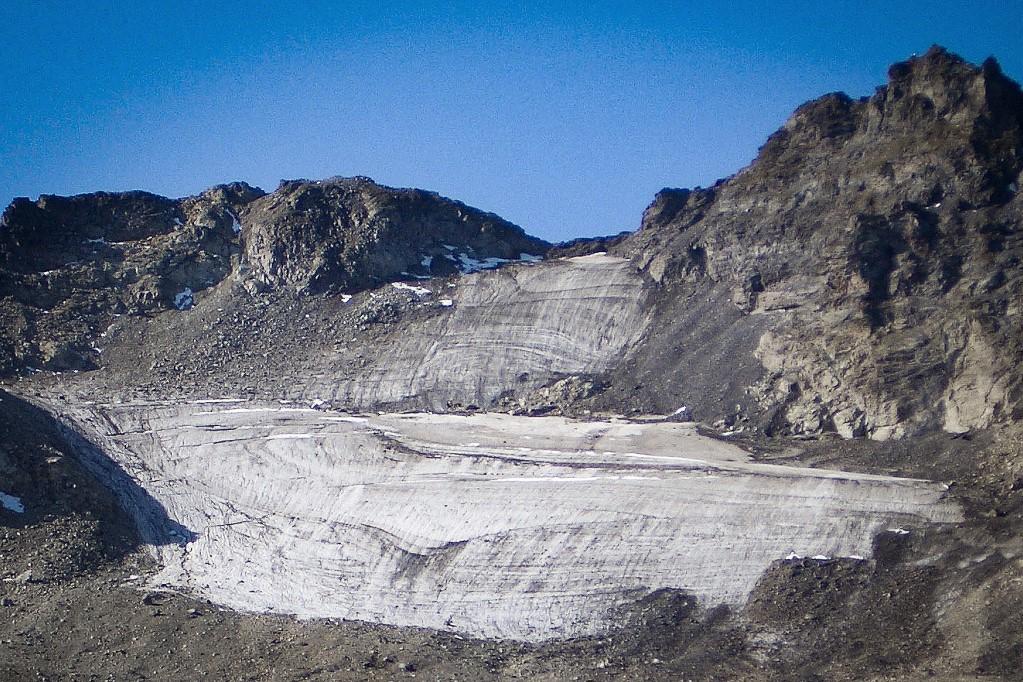 Handout picture taken in summer 2006 and provided by Matthias Huss shows the now vanished Pizol glacier in the Swiss Alps, above Mels. Swiss mourners on September 22, 2019 undertook a “funeral march” up a steep mountainside to mark the disappearance of the Alpine glacier amid growing global alarm over climate change.

In September 2019, Huss participated in a symbolic funeral for the Pizol glacier in northeastern Switzerland, at an altitude of around 2,700 metres.

“Since then, we have stopped active monitoring of Pizol. It no longer makes any sense,” Huss said.

He plans to collect two final samples in a few weeks, but, he acknowledged, “after that it will really be over”.

And Pizol will surely not be the last glacier to melt away, Huss said.

“Over the next 10-20 years, there will certainly be other well-known glaciers that will disappear.”

Most of that increase has occurred in the last 50 years.

Huss has been fascinated by the mammoth ice formations since early childhood, when he first set foot on the giant Gorner glacier, near Zermatt.

“Every time I return to a glacier, I have this special feeling, and I think about the first time,” he said.

"“It is true that, as a human being, it is depressing,” Huss said. "But as a scientist, it is also very interesting to see and analyse such rapid changes.”

That childhood pleasure is visible each time the lanky yet athletic figure bounds across the bluish crevasses cutting across his path.

Given Huss’s love of glaciers, one might expect the work of documenting their rapid demise to be a sad endeavour.

“It is true that, as a human being, it is depressing,” he said.

“But as a scientist, it is also very interesting to see and analyse such rapid changes.”

Huss said he hoped that highlighting what scientific measurements tell us about the state of the glaciers could finally help spur concrete action.

“For a while now, I’ve had the feeling that there has been a real change in the way politicians think” about climate change, Huss said, welcoming the fact that “a lot of people are now saying that we must act.”

But, while there are swelling numbers of action plans, he insisted that “at some point, they will need to be transformed into something real.” 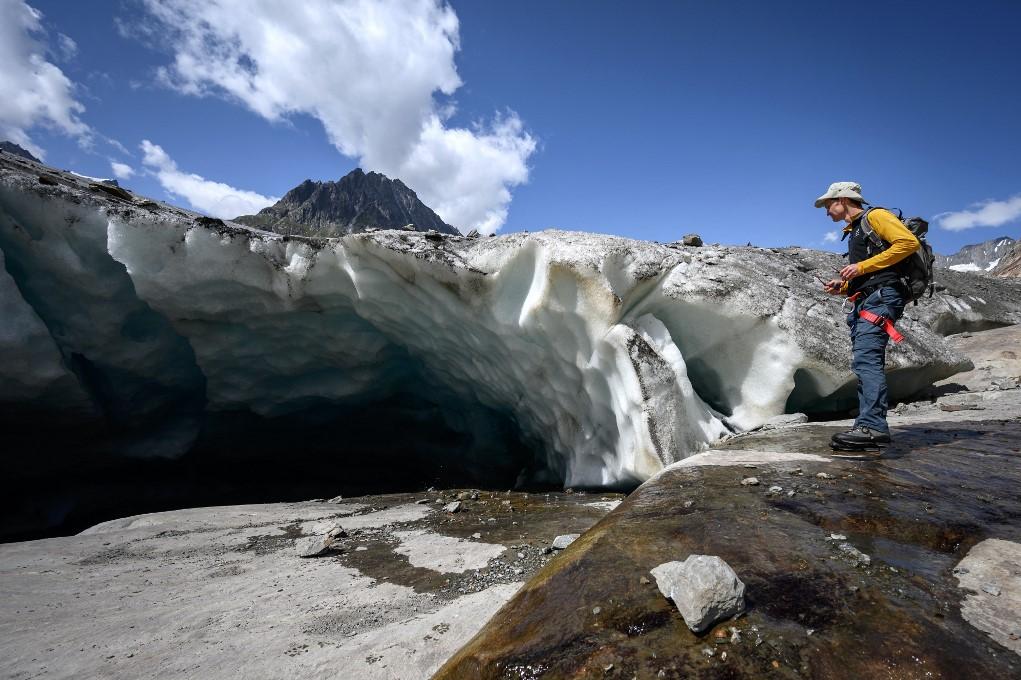 Matthias Huss stands next to an ice cavity of the Aletsch Glacier on August 25, 2021. Photo: Fabrice Coffrini / AFP