Malta-born Jon Courtenay Grimwood, who also writes using two other pseudonyms, is on this year’s list of guest authors for the upcoming Malta Book Festival. He chats to Ramona Depares about spy novels, Valletta and juggling three different literary personas.

You write under three pseudonyms – Jon Courtenay Grimwood (alternate histor and post cyber-punk), Jack Grimwood (spy thrillers) and Jonathan Grimwood (literary novels) – each in a different genre. How were these ‘alter-egos’ born? Was the distinction in style planned, or did it happen organically?

It was partly organic. After the short sharp sentences of the early post cyberpunk novels I wanted to write something that flowed more slowly, with longer sentences and interlinked paragraphs and this led to the Ashraf Bey novels set in North Africa.

I then took what I’d learned writing those and produced Stamping Butterflies, 9tail Fox and End of the World Blues (one of my absolute favourites), set variously in Morocco, San Francisco and Tokyo. The Last Banquet was something else entirely. It arose from an idea I planned out on a paper napkin, put away for 15 years and went back to when it was ready. I wrote it in 12 weeks, mostly on my iPhone and a fair amount of it is first draft, which has never happened before and will probably never happen again.

Using a slightly different name for each genre came out of not being allowed to write everything I wanted to write under one name. Branding matters more these days and publishers, bookshops and readers like to have an idea of what they’re getting and that’s fair enough. There’s no hiding who I am with these names. They’re simply there to indicate where the books should go in the bookshop.

You were born in Valletta and lived in multiple places. To what extent have the countries you’ve lived in inspired/informed your writing? Are there any specific settings/characters that were born out of such inspiration? 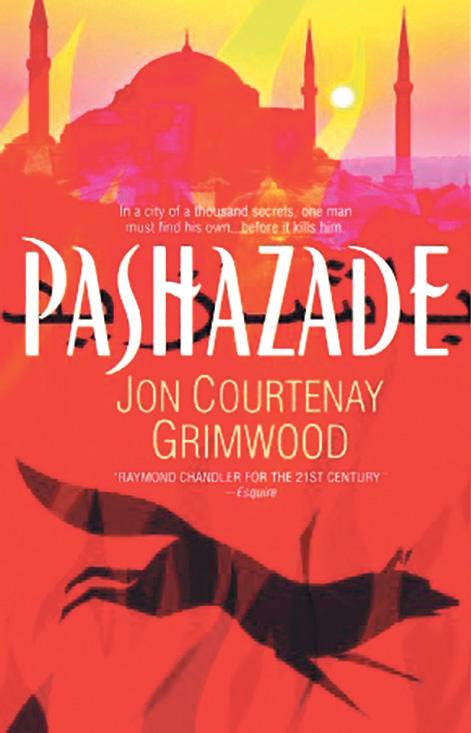 Every walled city I’ve ever written is a combination of Valletta and Mdina! My cities come out of childhood memories of walking narrow streets with high walls, shadows and narrow strips of sky overhead. I’ve added bits of other walled towns, cities and villages over the years. Marrakesh, Carcassone, a mountain village in Spain, and Venice, of course, although that’s walled in effect by the sea. But the sense of never quite knowing what’s around the corner or what you’re going to find comes from a childhood habit of getting myself lost and finding it frightening and intriguing at the same time.

You spent your initial years in Malta, getting acquainted with the back streets of the capital with your nanny. Would you say the strong historical aspect of your first home influenced your approach to sci-fi, where you’re known for a very distinctive style that focuses on an epic part of our history and reimagines it?

Yes. Very much so. Whoever brings you up probably shapes you for life and Carmen, who looked after me, fed me, took me shopping and for walks and to church with her, formed who I was. She’d put me to bed each night with a thick slice of bread under my pillow in case I woke up and was hungry (I’m pretty sure that’s where my obsession with proper bread came from.) At weekends  she’d take me to her family home so I could play with her much younger brothers. I think the history just seeped into me while we were walking and talking.

Malta stands at a crossroads between cultures and has been warred over forever by empires convinced their desire for the island gave them a right to it. Any one of a dozen branch points in history could have led to entirely different world. What I often do with fiction is take a branch point, make a different change and then write a future where that change is already in the past.

To what do you attribute this fascination with an alternate history that in turns affects future events (as we know them so far). Do you view this narrative technique as a form of social commentary?

In its way, all fiction is social commentary. Science fiction more than most, although that distinction seems to be fading as we move into a world where pretty much everything seems to be science fiction now. Most of my novels are written as a reaction to something. reMix to the slaughter in Bosnia. The Ashraf Bey/Arabesk novels to the water wars in Africa. Also, novelists of my generation in Britain came of age under Margaret Thatcher, so we were already used to taking to the streets and making no distinction between the personal and the political.

My fascination with cultural precipices comes from reading novels when young, where I knew a major change was about to happen but those in the book didn’t. Stories set at the end of the Roman Empire, the edge of the French Revolution, the eve of the First World War.

The Tom Fox spy thrillers for Penguin (which I write as Jack), are based in the run-up to the fall of the Berlin Wall, a massive cultural change that remade global politics. The Last Banquet (which I wrote as Jonathan Grimwood), deals with the decades before the French Revolution and switches from a historical to a modern and then post-modern mindset.

Plus, of course, we stand on the edge of an extinction event with climate change. Perhaps not the extinction of the human race, but certainly of civilisation as we know it. So I find it very hard not to regard everything as social commentary at this point.

Your brain switches between genres seemingly effortlessly. What is the creative process like? Do you ever find, say, Jack Grimwood sneaking into Jonathan Grimwood, and so forth? Or is it like a literal switch?

I try to keep the personas different. It’s hard, and sometimes I have to fight myself not to add nuanced and multi-layered cultural references to the Jack Grimwood novels or gritty knife fights to literary novels. I do, however, sneak things in and hope that every now and then someone recognises them and they bring a smile. 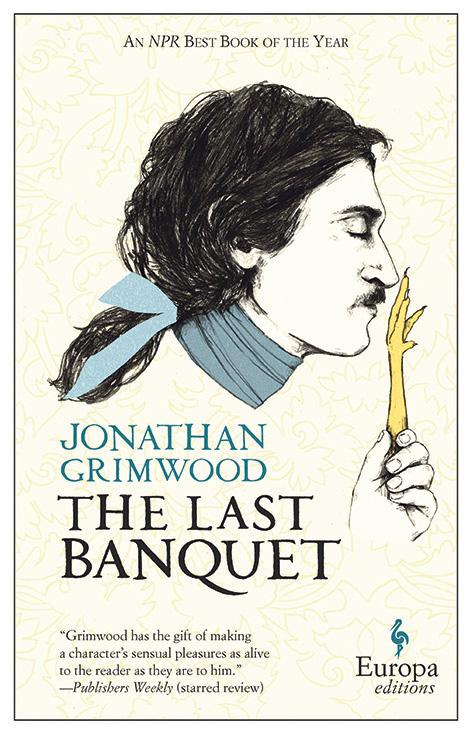 Your most recent works were as Jack Grimwood, thrillers based in Moscow and Berlin respectively. Is any of it inspired by real life, specifically yours?

I was in Moscow very briefly in the 1980s, at the start of Perestroika. I also had friends who worked there, as I had friends who lived and worked in East and West Berlin. Pretty much everything in the books is based on a sliver of fact: heavily embroidered, anonymised and quite often flipped right around, but fact all the same. I’ve known a fair number of people in intelligence – and one of the great advantages of being a journalist is that people will talk to you and often candidly.

Comparisons like that make for good cover quotes, but that’s about it. I liked “Raymond Chandler for the 21st Century”, which was on the US covers of the Arabesk books. “Reads like a cross between Patrick Süskind and Angela Carter”, from the Irish Times for The Last Banquet is another favourite if somewhat generous. But my absolute winner was, “Vile, Vicious and Sordid”. I loved that one so much I made the publisher put it on the cover.

And does this mean that the era of John Courtney Grimwood sci-fi is closed? 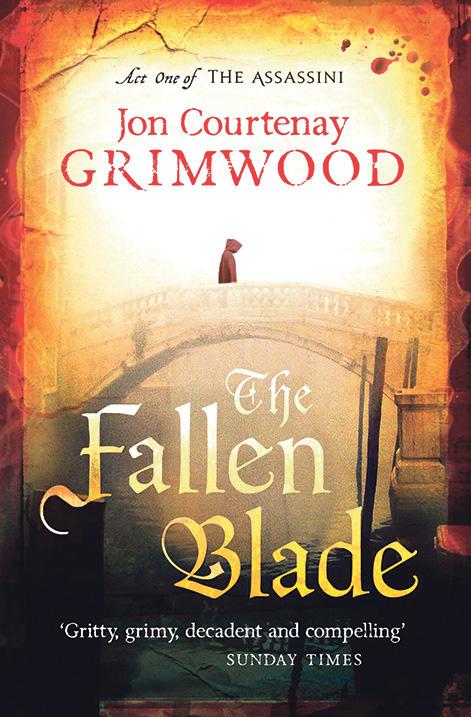 I also keep returning to a novel set in the graveyards of Paris, featuring a never-ending war between cats and crows who turn into the humans they once were each night and then back into their animal forms at dawn (it is an adult fairy story, obviously!)

How long has it been since you were in Malta? Will you be revisiting your old childhood haunts?

Much longer than it should be. I last came back at the end of the 1980s, and visited all the places I knew and the places I’d lived in. Somehow, everything had changed and yet, somehow, stayed the same. My son’s been back far more recently for the wedding of a friend and revisited places for me so that I could remember them by proxy.

One of the many reasons I’m happy to be invited to the festival is that it will let me go back to the house on the walls of Valletta where I was born if it’s still there; and to the seafront of St Paul’s, where I know the house where I grew up, with its garden sloping down to the sea, is long gone except in old photographs and my memory. Everything from this visit will find its way into a book, because everything does eventually.

You are also a journalist by profession – do you miss that aspect of your life at all?

I’ve grown too lazy to do more than write novels and waste hours on social media arguing minor points of politics. I miss some of the excitement of having short, sharp deadlines to meet but not enough to go out and find them.

Would you say that being a journalist and being a fiction writer are polar opposites – or do you see an intersection in technique?

I think the discipline of being a journalist and being able to meet a deadline is a really useful disciple, as is not being too precious about your words, which you learn early and fast as a jobbing hack. I think writing is writing, the more you do the more you learn. I don’t doubt there are other writers who think that’s rubbish.

I’m extraordinarily lucky in having been able to earn a living for most of my life from one or the other. The other advantage is that writers and journalists never really retire!

I’m editing a standalone thriller set in the 1940s in the British Channel Islands for Penguin; I’ve finished Heaven, Hell and Mexico City; I’m still writing about Cats & Crows and I’ve recently reworked a literary novel called Kingdom of Silence. And, if I spent less time on Twitter I’d probably have done more!

The Malta Book Festival takes place between November 6 and 11 at the Mediterranean Conference Centre in Valletta. On November 6 at 7pm John Grimwood will take part in Strange New Worlds, with Loranne Vella, Kali Wallace and Dave Rudden. Writer and translator Mark Anthony Fenech will be moderating the discussion on the role and perception of genre literature in the literary world.

On November 11 at 6pm visitors are invited to meet with the author at the Theatre Hall. Then, at 7.30pm, he will be part of a Historical Fiction in the Mediterranean session being organised by the National Book Council and the Spanish Embassy.