For decades, millions of tourists and Maltese people visited the Dwejra Azure Window, which served as a backdrop to photos, commercial promotions and films.

But on that early stormy morning on March 8 five years ago, there is no clear witness who saw it collapse. The collapse of the massive rock structure left everyone shocked and perplexed when it disappeared into the sea, destroying quite possibly Malta’s most famous landmark.

For five years, mystery shrouded what happened on that day. But now, Professor Joseph Caruana, John Wood and other scientists have published a three-year study which for the first time uncovers, with scientific precision, how the Azure Window collapsed.

How did the Azure Window collapse, and where does it lie today? Video: Karl Andrew Micallef

The sea erosion that carved the natural wonder around two centuries ago was also the cause of its demise. The scientists were able to confirm that “erosion at the base of the pillar resulted in the formation of a notch on its north-facing side”.

Shortly after 8.30am on Wednesday March 8, 2017, during a massive storm, “the base weakened to the extent that the pillar gave way”. 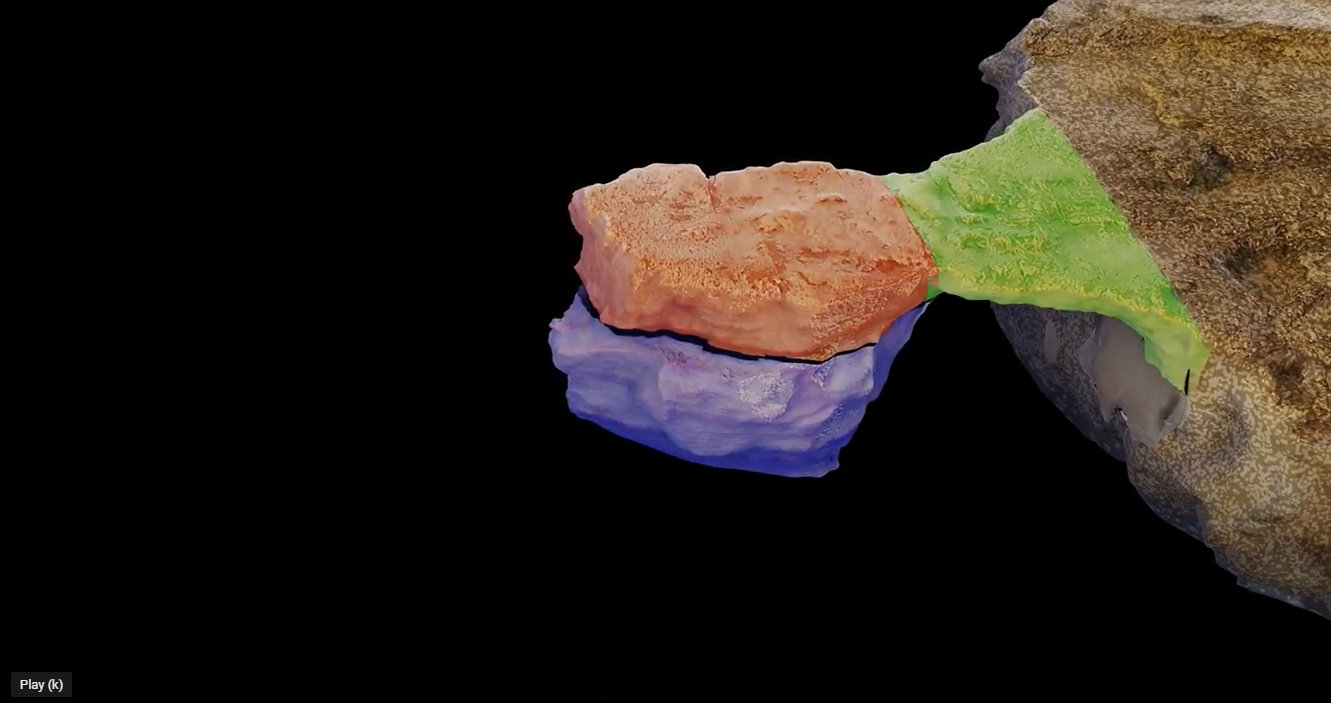 The window started to collapse when the pillar section (the blue part) was eroded below sea level until the base supporting it was too weakened and gave way. This is what initiated the window’s collapse. Photo: Azure Window Survey Project

Seconds before the collapse, pieces of rock likely crumbled down the base that was being battered by the waves, causing the 28-metre structure to become too heavy for the tapered foundation to support it. That is when the scientists believe the pillar gave way, falling towards the southwest.

When it was still standing, the Azure Window had a very visible crack running all the way along the pillar. This, the scientists say, was a partition delineating two different types of rock.

As it came crashing down into the sea, the pillar became detached from the horizontal arch and the two different types of rock split and separated. 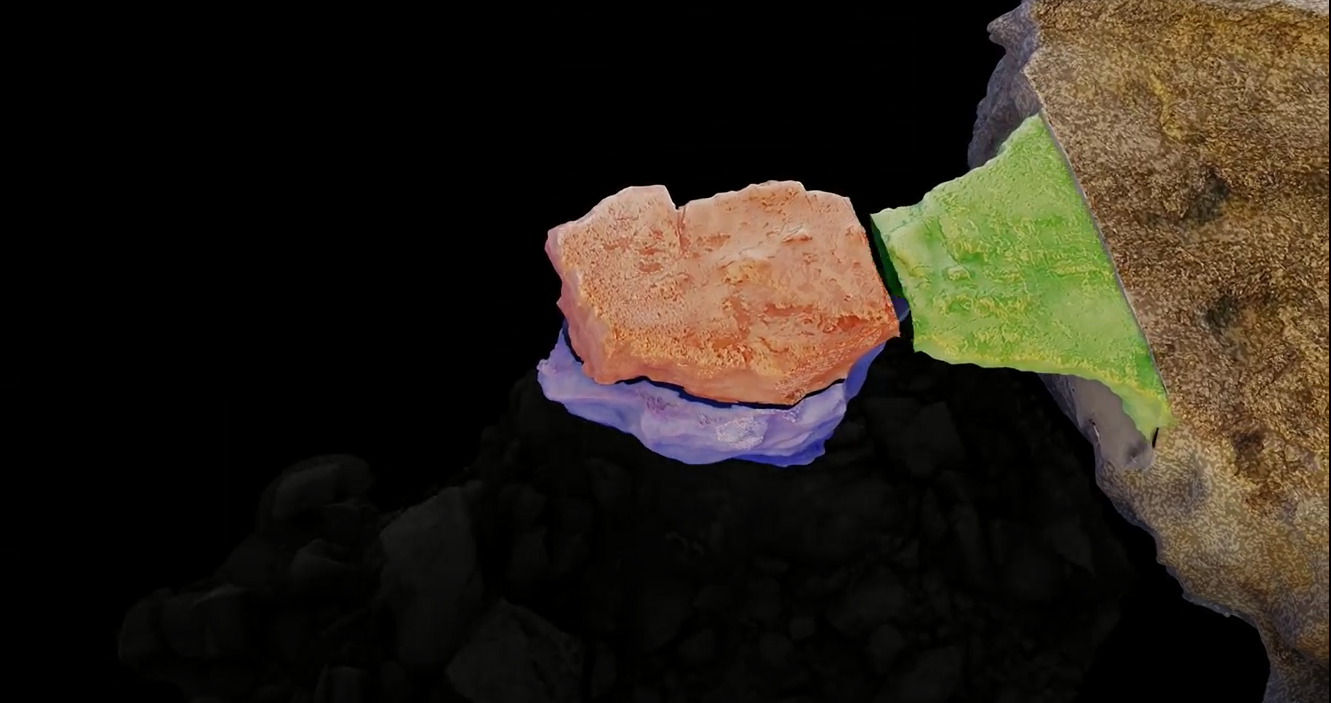 As it came crashing down into the sea, the pillar became detached from the horizontal arch, known as ‘the bridge’. Photo: Azure Window Survey Project

Caruana and Wood say it was bound to split this way, because the boundary between the two rocks “constitutes a plane of weakness along which separation may occur more easily”.

“Large sections from atop the pillar broke along existing joints in the rock, remaining relatively intact,” the study concluded.

The bridge, which used to see many people crossing it, collapsed vertically downwards upon losing the support of the pillar, and fragmented.

It is estimated the entire process, from the moment the window started to collapse till all of it lay still at the bottom of the sea, lasted around 30 seconds.

Over the past months, Caruana, an astrophysicist at the University of Malta, John Wood, a photogrammetry and 3D specialist and their colleagues, spent countless hours diving around the mammoth, 8,000 square metre underwater site where the remains of the structure lay on the seabed. 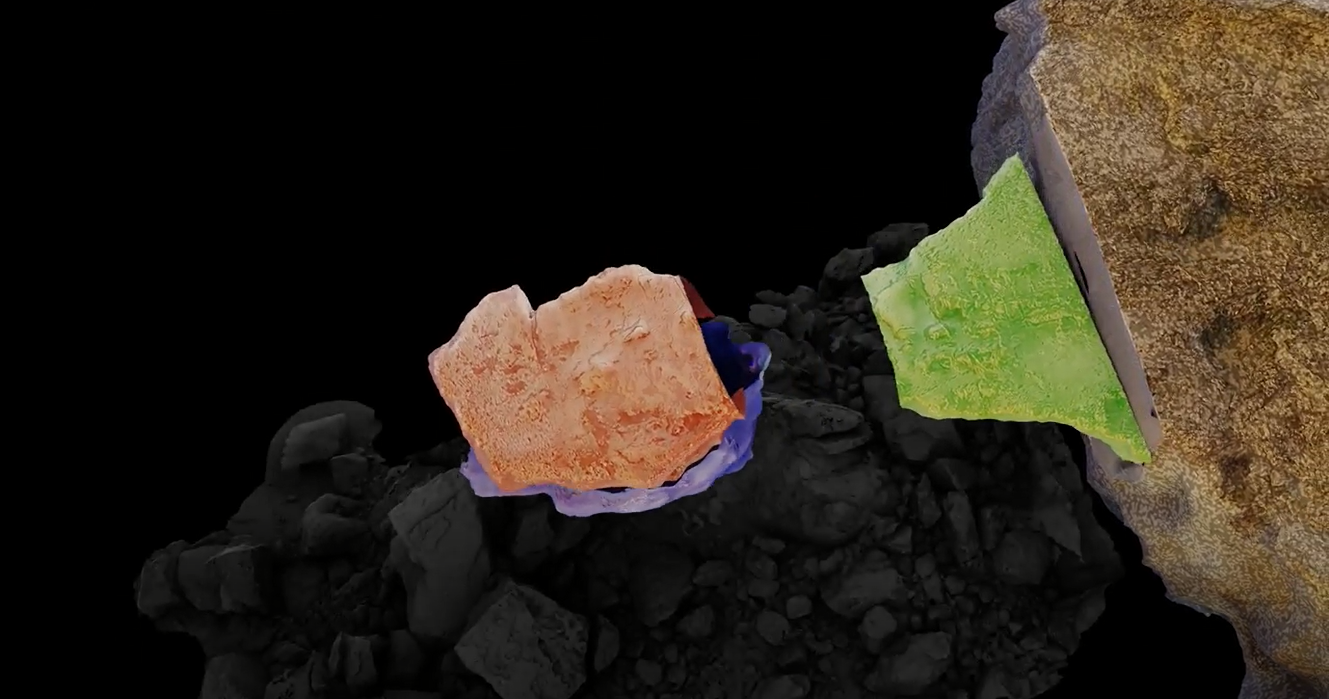 The pillar gave way falling towards the southwest, just before separating at the crack that delineated two different types of rocks. The crack was between the blue and red parts of the pillar. Photo: Azure Window Survey Project

Using a purpose-built setup, with cameras and lights mounted on an underwater scooter, they captured photos of each rock, from every angle. They collected around 25,000 photos in total, which they fed into computer software that created an extremely accurate 3D model of the site as it is today.

Then, they compared each rock to photos of the Azure Window when it was still standing, until they pieced together how the structure collapsed and where the pieces rested on the seabed.

“We would grab all the boulders and play around with them like pieces of a jigsaw puzzle in the software, until we found which pieces fit together,” Wood said, while meticulously explaining how the process of photogrammetry works.

“There are three particular pieces of rock from the upper part of the pillar that we managed to fit together precisely, no questions asked, down to the centimetre.” 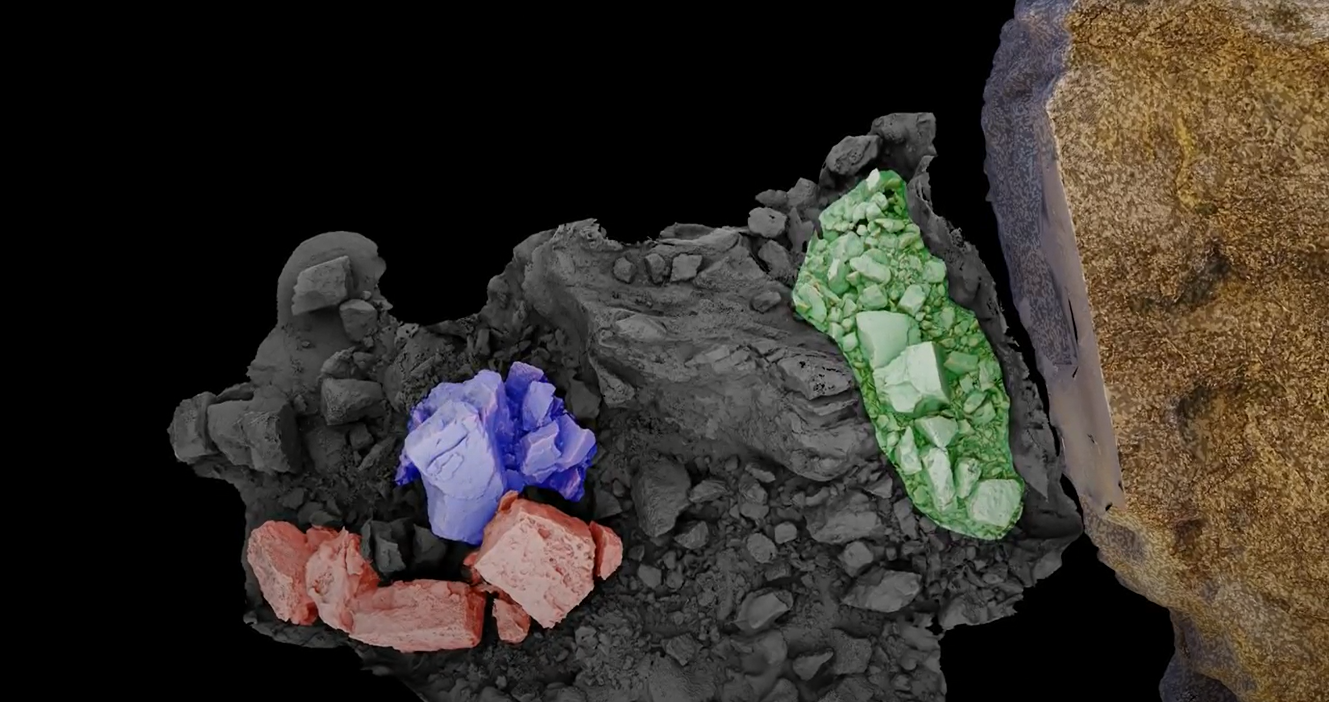 Large sections from atop the pillar broke along existing joints in the rock, remaining relatively intact. The bridge, which used to see many people crossing it, collapsed vertically downwards upon losing the support of the pillar, and fragmented. Photo: Azure Window Survey Project

Wood, a professional diver who frequently creates 3D models of underwater shipwrecks around the Maltese islands, said this was one of his most challenging projects yet, because of the immensity of the site and the laborious process it entailed.

“An added challenge was the depth range to be covered. Spanning from just below the surface down to 60 metres, this made some specific dives technically quite challenging,” he said.

Nobody knows exactly how old the Azure Window was, but researchers think it was quite a recent addition to the Dwejra landscape. The first documentation of its existence is an 1824 painting, and it is assumed that it had not formed long before.

Sixteenth to 18th-century scholars who documented Dwejra wrote about all the other features and rock formations in the area but never mentioned the window, leading researchers to believe that if it was standing back then, they could not have missed it.

The arch attracted people from all over the world and featured as a backdrop in a number of films, such as the 1981 Clash of the Titans, The Count of Monte Cristo and the popular TV series Games of Thrones.

A government-driven "international initiative" to mark the collapse in some way never gained traction, save for proposals to build a hotel in the area or rebuild the arch out of steel.

Caruana insists it would be a disastrous idea to try to recreate the natural wonder.

“You don't mess with nature. You let it do its work. The worst thing you can do is interfere with it,” Caruana argued.

“The window was beautiful, there's no doubt about that, but part of its magic was derived from the fact that it was nature’s work, and nature itself has now made an amazing wonder out of it, in another form, underwater.

“We hope this project helps people appreciate the Azure Window’s new form of beauty and that helps us understand how important it is to conserve this new site, just as we should conserve the rest of Dwejra. That is where we should focus our efforts.”

To help the general public learn more about the work, a documentary feature is available at http://www.dwejra.net.