Former chief justice Vincent de Gaetano, now back home after serving as judge in the European Court of Human Rights, speaks to Ray Bugeja about the situation in the country.

After nine years sitting on the European Court of Human Rights (ECtHR), what is the biggest lesson you have learnt in terms of the violation, promotion, upholding and defence of human rights by contracting states and their domestic courts?

What strikes me most today, perhaps more than before, is what I would call the fragility of fundamental human rights. Without a proper environment of sound values and of ‘rule of law’ principles, these rights become meaningless, prone to be used and abused by politicians for their own political ends.

A year ago, at a public talk I delivered at San Anton Palace, I tried to show up some of the bumps and potholes one finds when trying to draw a picture of the state of the rule of law in Malta. That picture has certainly not improved in these last 12 months.

The Court in Strasbourg often speaks of “the core Convention rights” – the right to life, the right not to be subjected to torture or to inhuman or degrading treatment or punishment – but the right of freedom of expression, the right to be able to express your dissent peacefully, to protest peacefully, to receive and impart ideas without fear of retaliation, without the subliminal threat of the peaceful protest you are staging being qualified as ‘provocation’, this right is a pre-requisite for the very existence of most of the other rights. As a famous Italian jurist and politician, Piero Calamandrei, once wrote: “La libertà è come l’aria: ci si accorge di quanto vale quando comincia a mancare.” (Freedom is like air: you realise what it is worth when it starts to be missing).

What about a government’s so-called positive obligations?

The notion of ‘positive obligations’ was developed by the ECtHR to ensure that the rights and freedoms set out in the European Human Rights Convention would be secured to all those within a state’s jurisdiction in a practical and effective manner. States are, therefore, not only enjoined not to violate, directly by legislation or indirectly through the deliberate actions of their agents, those rights and freedoms, but to ensure they are not violated even by third parties or through administrative negligence.

Every death by suicide or overdose that occurs while a person is in lawful custody, every building that collapses in the course of adjoining works, every traffic fatality in known dangerous spots raises the spectre of the state not fulfilling its positive obligation to protect life and limb.

On the home front, does the prevailing legal, constitutional and political situation worry you?

Of course, it does worry me. What we have witnessed and heard these past weeks raises many questions. Are our legal and judicial systems effective in rooting out and punishing corruption? Is our Constitution geared to cater for abnormal situations? Is our bi-party political system easy prey for crooks, thieves and fraudsters?

I confess I have no ready answers to these and other similar questions. I am bewildered.

Do you agree we have a constitutional crisis and, if so, why, what has caused it?

I would rather say that we have an ‘institutional’ crisis because the problem impacts other organs and actors not specifically emanating from the Constitution, like the police force, political parties and the myriad regulatory bodies and public authorities and entities that keep being created.

I am on record as having said a few years back that our Constitution is basically sound; but if the people appointed to administer it are alien to ‘constitutional morality’ – the true purpose for which a Constitution exists – then the Constitution may end up serving individual or party interests instead of the common good.

I have very little patience with those who say that the president has very little power under the Constitution. Apart from the fact that certain powers and duties are necessarily implied – like the power to remove a prime minister, or, indeed, any minister, when his/her position becomes, for any valid reason, untenable – the president certainly has the moral authority, and I would say the moral duty, to stand up and denounce whatever could be eroding the ‘constitutional morality’ of the country or undermining its institutions.

So, do you believe the president should take a more proactive role when the country’s institutions are perceived as being impotent and failing in their constitutional duties?

This is not just a question of what I believe but of what common sense and a teleological reading of the provisions of the Constitution dictate.

The president is the highest political authority in the land. He has sworn to “preserve, protect and defend the Constitution of Malta”.

When a politician makes a serious error of judgment which impacts on… the standard of moral behaviour expected of him or her...s/he should resign

What is the purpose of keeping the president so “fully informed”?

Can we, in this day and age, simply perpetuate the myth that this is just a residue from a British constitutional convention which requires the prime minister of the UK to keep Her Majesty fully informed, full stop?

The rule of law depends on the proper functioning of the courts, the police, the attorney general and the prime minister, among other institutions. So can the rule of law prevail if there are so many doubts and even lack of confidence in such institutions?

I was appointed chief justice in 2002, at the height of what must surely rank as the biggest judicial scandal in the island’s history – a judge and a chief justice had been arrested and charged with bribery. I still remember then President Guido de Marco coming out from his office at Verdala Castle ashen faced and declaring to the other members of the Commission for the Administration of Justice: “I wish I were dead today.” Yes, it seemed that the whole edifice of the rule of law had collapsed then.

But with a collective effort by all concerned, we pulled through and confidence was largely restored.

This is not to say that there were not, even under my watch, other problems connected with the proper administration of justice, some of which persist to this very day, chief among them the delays in delivering justice.

When a criminal case lingers for more than three years at one level of jurisdiction; when a compilation of evidence, instead of being concluded within the ordinary time of one month, proceeds in dribs and drabs over months, if not years, with the inevitable result that people accused of very serious crimes have to be granted bail, when witnesses are summoned unnecessarily to court, these and many other problems still persist notwithstanding all the recommendations made by the Bonello Commission in November 2013.

There does not seem to be the will, or the energy, to restructure working methods differently.

These problems have now been compounded by the perception that the police and the Attorney General are not being as proactive as they should be in dealing with crimes such as bribery, corruption and money-laundering, with the result that a number of in genere judicial inquiries have been initiated at the request of private individuals and are pending.

I have already had occasion to state elsewhere and publicly how and why such inquiries are of limited value and cannot replace timely, effective and robust police investigation. With the enormous workload that each magistrate has, these inquiries proceed very slowly and, ultimately, the result is sent to the same authority – the Attorney General – whose apparent or real inaction necessitated the very inquiry!

Both the police and the Attorney General are part of the executive branch of government, so, ultimately, the buck stops at the prime minister’s door. 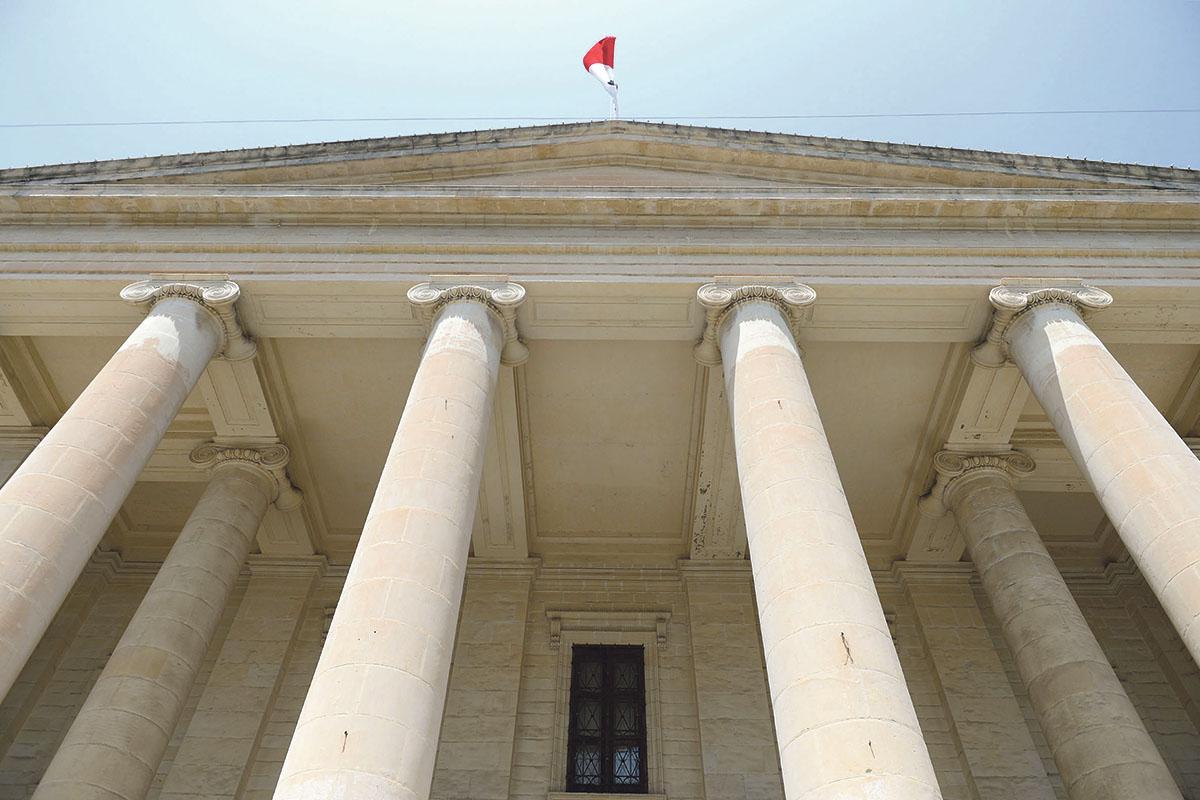 Are our legal and judicial systems effective in rooting out and punishing corruption? Photo: Matthew Mirabelli

Do you agree with the way judicial appointments are made?

Again, the system envisaged by the Constitution, that is appointment to either one or other of the judicial benches by the president on the recommendation of the prime minister, worked so long as the perception was that, in making that recommendation, the prime minister would not be motivated by any political or private considerations.

I was appointed under that system in 1994. A few months after my appointment, the late Fr Peter Serracino Inglott, who appears to have been privy to Cabinet discussions, told me that my appointment had been delayed for months because one senior government minister considered that I would be too harsh when I meted out punishments in criminal cases, having been a prosecutor for 15 years.

After my first trial by jury as a judge sitting in the Criminal Court, I was criticised by the attorney general for being too soft in sentencing someone to 12 years imprisonment.

There were certainly no political considerations there. Unfortunately, that perception has been shattered for a variety of reasons.

The current system envisages what is in practice only a filtering mechanism. The Judicial Appointments Committee vets potential candidates to ensure they have the basic requirements for appointment to the Bench. However, as far as I can make out, it does not recommend that any one or more vacancies be filled by particular individuals; that decision remains the exclusive and unfettered prerogative of the prime minister.

And that is where the problem lies, namely that in these and many other appointments, the prime minister does not have to justify, by cogent reasons, his choices. That is certainly a deficiency in the system.

There does not seem to be the will, or the energy, to restructure working methods

Is there urgent need for constitutional reform and, if so, where should we start?

A reform should be a process that engages all the stakeholders, including civil society, in the discussions leading up to concrete proposals.

It should not be the result of knee-jerk reactions or the desire to appear to be doing something while, in reality, leaving everything as it is.

For starters, all the members of the House of Representatives should be full-timers so that they can really act as a watchdog on all legislation proposed.

Public appointments to all top offices in the executive branch of government should be subject to scrutiny and approval by the House of Representatives as a constitutional principle and not merely as an adjunct to the Public Administration Act.

And the improper use of public funds by government ministers and other senior officials in the public administration should be a well-defined criminal offence separate and distinct from the offences of misappropriation and of embezzlement found in the Criminal Code.

As a legal person who has served as a judge, chief justice and also as deputy attorney general, do you make a distinction between legal and political responsibility? Is there a point where the two meet?

Of course, there is a distinction, just as there is a distinction between what a judge or magistrate can legally do and what s/he should not do for purely ethical reasons. It is not ‘illegal’ for a judge to be seen regularly gambling at a casino or regularly cavorting with politicians on social occasions but such behaviour would be highly improper for a member of the judiciary and could bring about his/her removal from office.

In the same way, a politician may have acted within the strict parameters of the law but in a politically irresponsible manner.

Political responsibility implies knowledge and awareness that one is in office to serve the entire community for the common good and not to use that office for one’s own personal profit.

This interview was carried out before the president delivered his Republic Day message.