The president of Repubblika said on Sunday he had received more “proof of abuse” committed by the police commissioner and the attorney general as thousands heeded the group's call to demonstrate for justice on the fifth anniversary of Daphne Caruana Galizia’s assassination.

Robert Aquilina, president of the rule-of-law NGO, told the crowd that since he had pledged never to reveal his sources, new sources had come forward from institutions with more evidence that police commissioner Angelo Gafà, deputy police commissioner Alexandra Mamo and Attorney General Victoria Buttigieg had failed to do their duty.

They were allowing “millionaire criminals to roam about and continue to disrupt the country”, he said.

Repubblika has mounted a court challenge against the commissioner and the AG demanding they take action against Pilatus Bank officials on the basis of an inquiry that had recommended criminal action against them on evidence of money laundering and criminal association. Aquilina has submitted the relevant parts of the inquiry in court.

What Repubblika have given to the courts so far was only the tip of the iceberg, Aquilina said. “We have hope, more than ever that our country has arrived at more moments of truth and justice,” he said.

The protestors in Valletta flew national flags and carried portraits of Caruana Galizia. 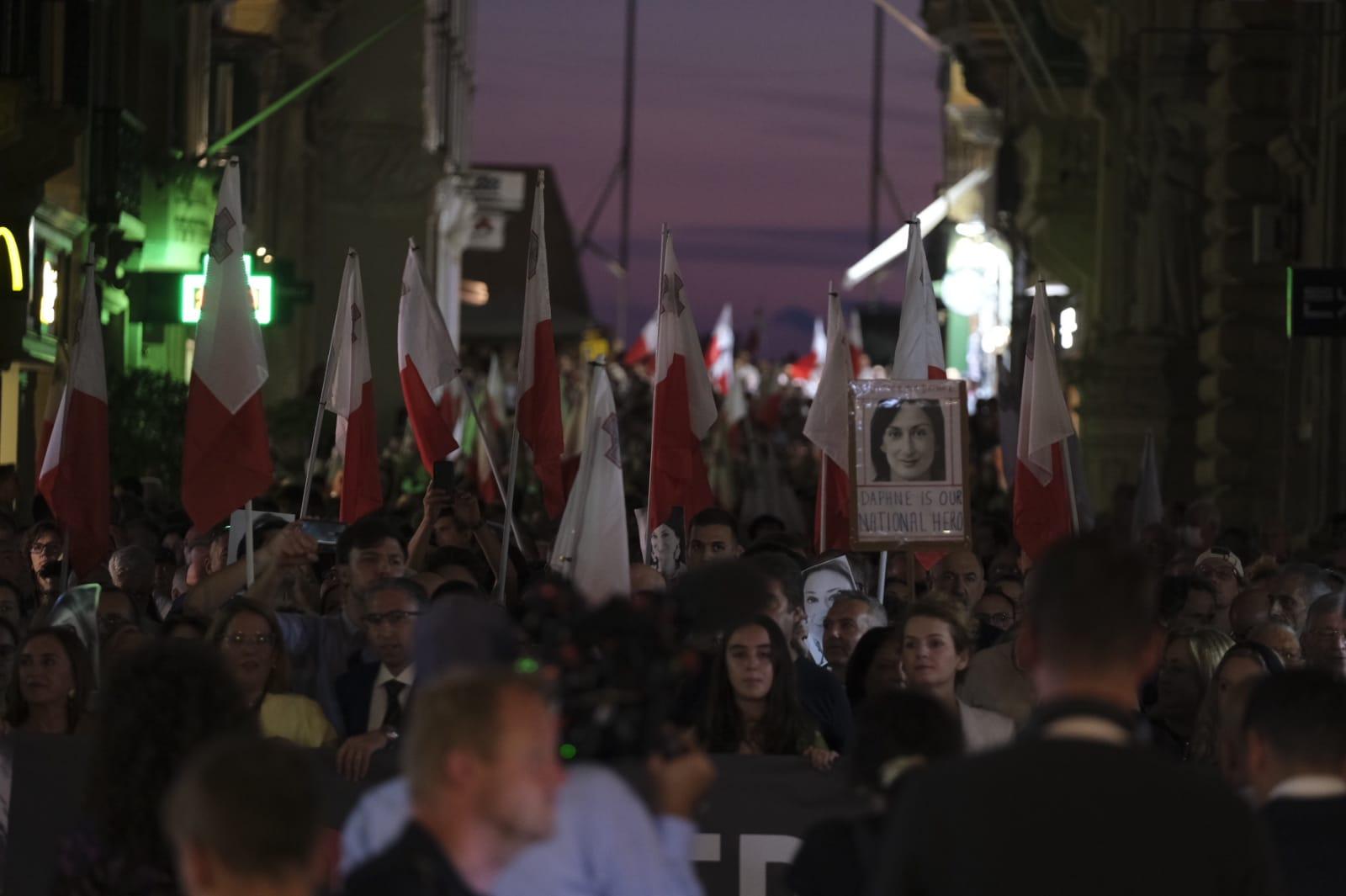 They first gathered in front of parliament and then marched in protest along Republic Street.

They called for justice and chanted "Daphne was right”, "assassins", "you killed her because she uncovered you", and "mafia".

Outside the law courts, they were addressed by 11 speakers.

Mallia said the murder of moral and intellectual leaders destroys the spirit of a country. "Those that protest keep hope alive," she said.

Aquilina said people had come out every month for the last five years to fight for truth and justice.

“We keep on doing this so that no one in Malta or abroad forgets the Maltese hero Daphne Caruana Galizia,” he said.

“We will continue fighting by any means to keep Daphne alive and to bring justice for the corruption that she unveiled and because of which she was murdered,” Aquilina said. 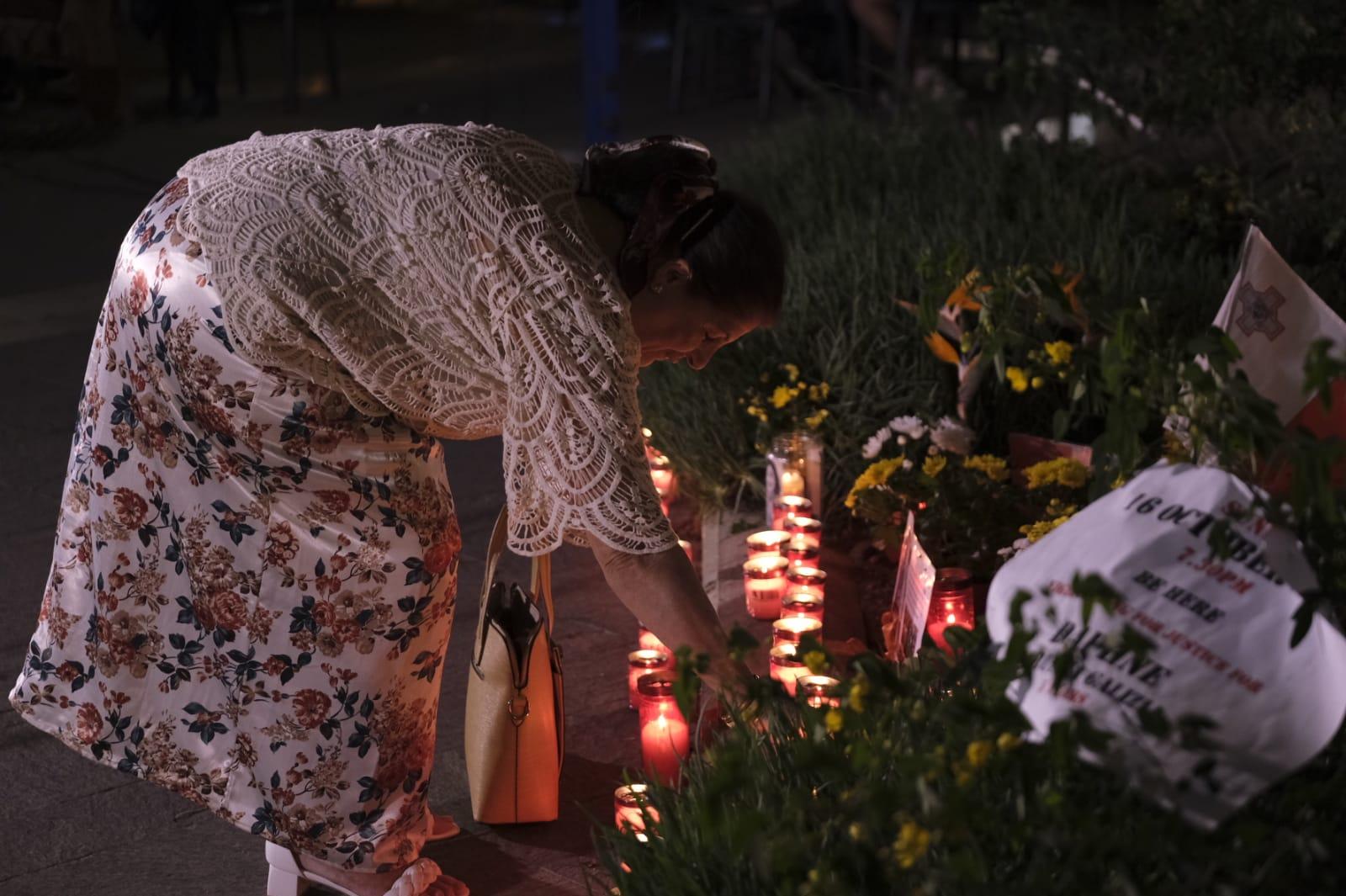 And Metsola, said the late journalist had been "a woman of steel… A woman who could tell right from wrong.

"In her investigative work Daphne Caruana Galizia always had one principle… to do her duty, to do what is right... She was demonised for this, her enemies made her family suffer, but she never backed down."

Pavol Szalai, of reporters without borders, said the Degiorgio brothers' sentencing was an important step that wouldn’t have happened without the family and people who had mobilised in favour of justice for Daphne.

The Degiorgio brothers on Friday pleaded guilty to the murder, joining their accomplice Vince Muscat and the confessed middleman Melvin Theuma in admitting guilt.

“We still need full justice to be served – for the family, for Maltese journalists, for the country. Malta needs this for its own healing,” Szalai said.

“Since Daphne was killed five years ago, four journalists have been assassinated in the European Union,” he said. “We have not yet seen full justice served for any of those murders.”

Delia said the arraignment of the Degiorgio brothers was a dangerous time for Malta because it came with the temptation to stop searching for justice.

“If we let go now, we abandon those few brave officials who fight for justice alone against criminals far bigger and far worse than the Degiorgios,” he said.

Police officers like Keith Arnaud and Kurt Zahra worked for justice even when Silvio Valletta, their superior, was in bed with criminals, Delia said.

Speaking via live stream from a church in London crammed with supporters, Gallagher, a human rights barrister, reiterated the call for justice.

"London joins the call for full justice," she said.

Earlier in the afternoon, hundreds of people joined Caruana Galizia's children Paul, Andrew and Matthew in a silent gathering at the site of the assassination in Bidnija.

And in the morning, Archbishop Charles Scicluna had another message on justice when he conducted mass at Bidnija.