The March for Choice is the first major demonstration since the Government set an indicative timescale of early summer 2018 for a referendum on the section of the state's constitution that ensures tight legal restrictions on terminations.

Campaigners gathered at Parnell Square from lunchtime before making their way down the city's main thoroughfare, O'Connell Street.

Chanting and waving placards, demonstrators then marched along the River Liffey past the landmark Custom House before crossing the water on their way to the gates of the Irish parliament.

Anti-abortion activists staged counter events in the city and across Ireland to warn against relaxation of the current law.

The existing Eighth Amendment of Ireland's constitution affords equal rights to pregnant women and unborn children. Added to the constitution in 1983, the amendment recognises an unborn child's right to life. 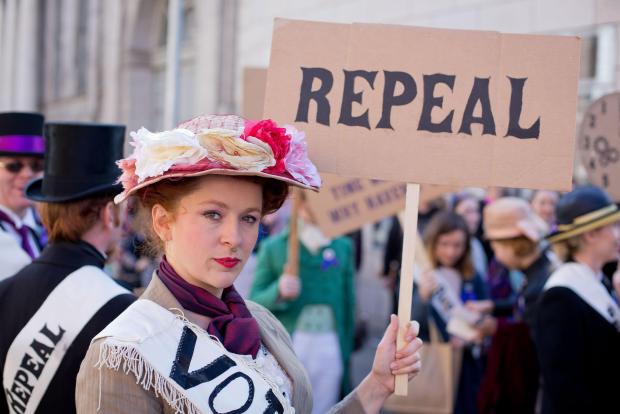 Terminations are currently only permitted when the life of the mother is at risk and the maximum penalty for accessing an illegal abortion in Ireland is 14 years in prison.

Thousands of Irish women travel to Great Britain every year to have a legal abortion.

With the prospect of a referendum having been on the horizon for some time, pro-choice and anti-abortion advocates have already been long campaigning on the emotive issue.

Those efforts are intensifying now a timeframe has been set for the vote.

The march in Dublin is the first big set-piece since Taoiseach Leo Varadkar announced on Tuesday that a referendum will likely be called in May or June next year.

A pro-choice rally was also staged outside the Irish Embassy in London on Saturday, with campaigners highlighting the numbers of Irish women who have travelled to Britain for an abortion in the last three decades.

A parliamentary body has been established to advise on the wording for the referendum.

The Committee on the Eighth Amendment of the Constitution is considering a report from Judge Mary Laffoy, who chaired a specially-designed Citizens Assembly of 99 people who deliberated and voted on the issue.

The assembly called for article 40.3.3, which was altered under the Eighth Amendment, to be removed from the Constitution.

It said it should be replaced by a provision which placed the onus on politicians to pass laws on termination of pregnancy, rights of the unborn and pregnant women's rights.