Activists gathered around a large printout of a newborn baby that was spread across the stairs leading to Castille, the Office of the Prime Minister. Demonstrators also spread Maltese flags and posters of newborns across the square.

Police officers supervising the event declined to provide an estimate of the crowd size, which appeared to run into the thousands, filling Castille Square and spilling into neighbouring streets.

Organisers said they believed around 20,000 people attended the event.

The crowd chanted 'le għall-abort, iva għall-ħajja' (no to abortion, yes to life) as it marched from Castille through Republic Street and towards the law courts. 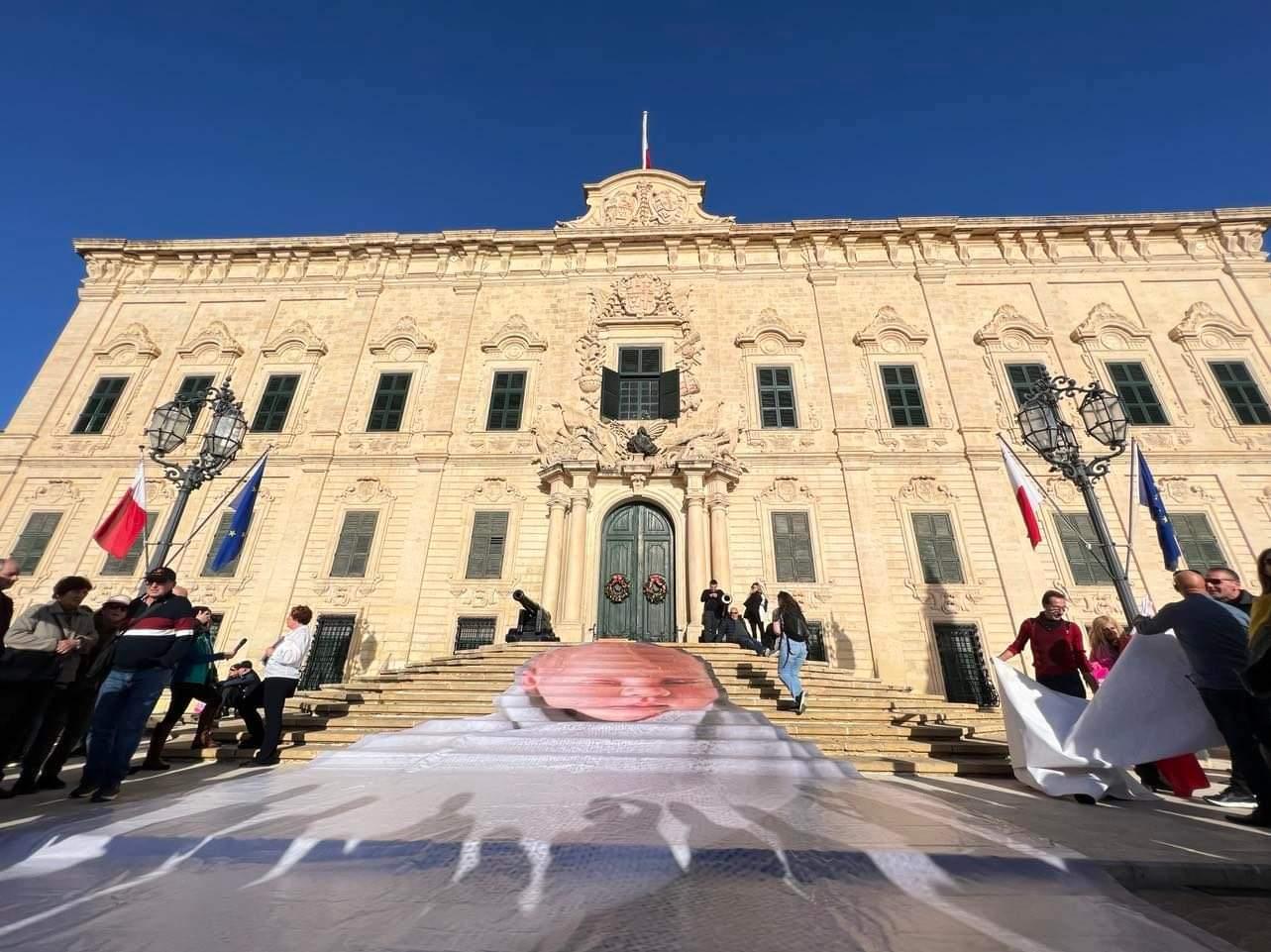 Organisers unfurled a large poster of a newborn baby onto the steps of the Office of the Prime Minister. Photo: Jonathan Borg

One placard was also placed on a Christmas crib featuring an infant Jesus, placed in the square as part of a Nativity scene.

The protest was organised by the Life Network Foundation, in collaboration with Doctors for Life and I See Life. 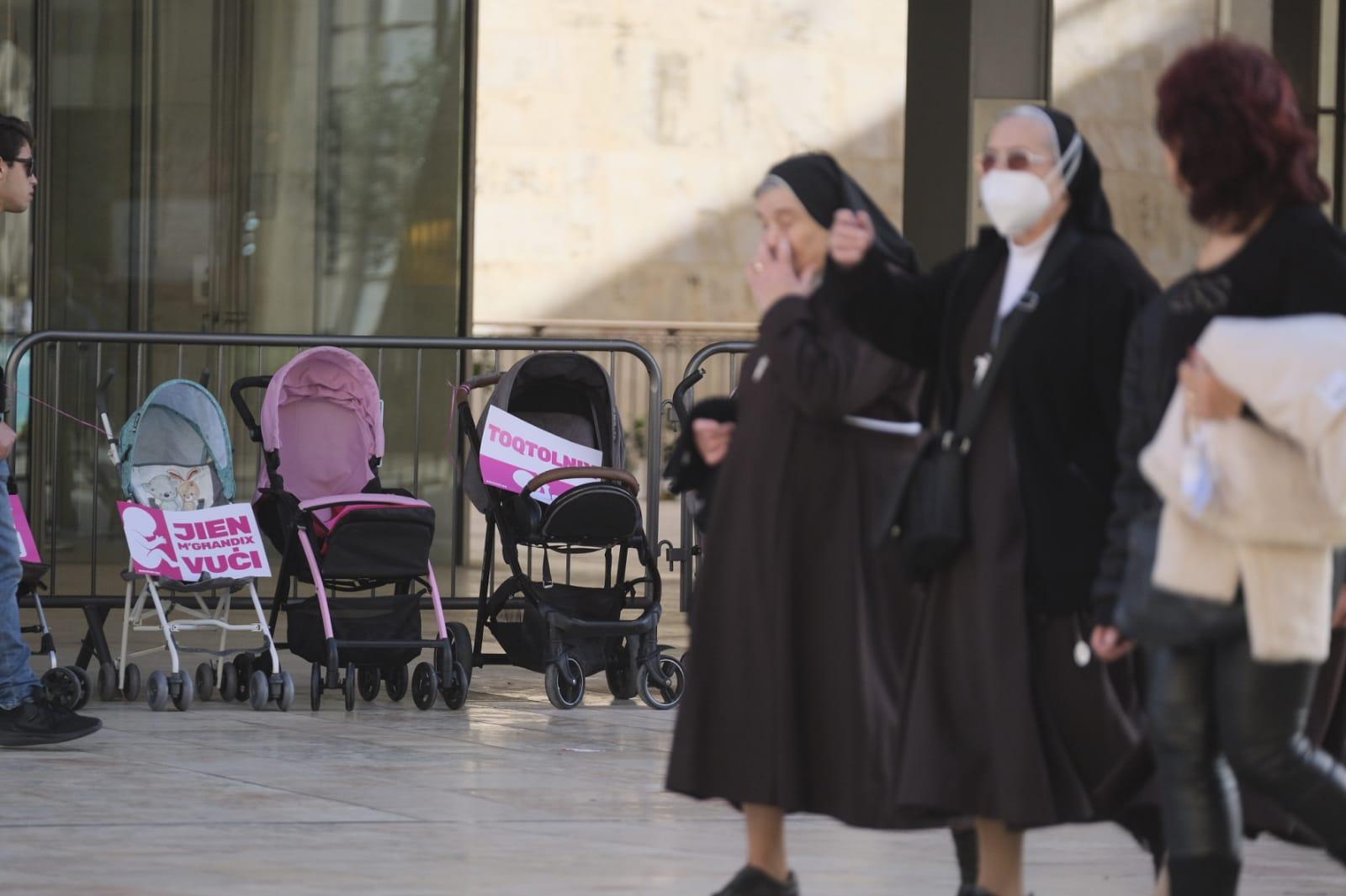 Nuns walk past baby strollers parked in front of parliament with messages such as 'I have no voice' and 'don't kill me'. Photo: Jonathan Borg

Among the attendees were archbishop Charles Scicluna and Nationalist Party leader Bernard Grech, who earlier on Sunday urged Labour MPs to speak up against the government's plans.

Grech shared a photo of himself with several other PN MPs, among them his predecessor Adrian Delia, at the rally.

Gordon Manche, who leads the evangelical group River of Love, was seen praying over a microphone. 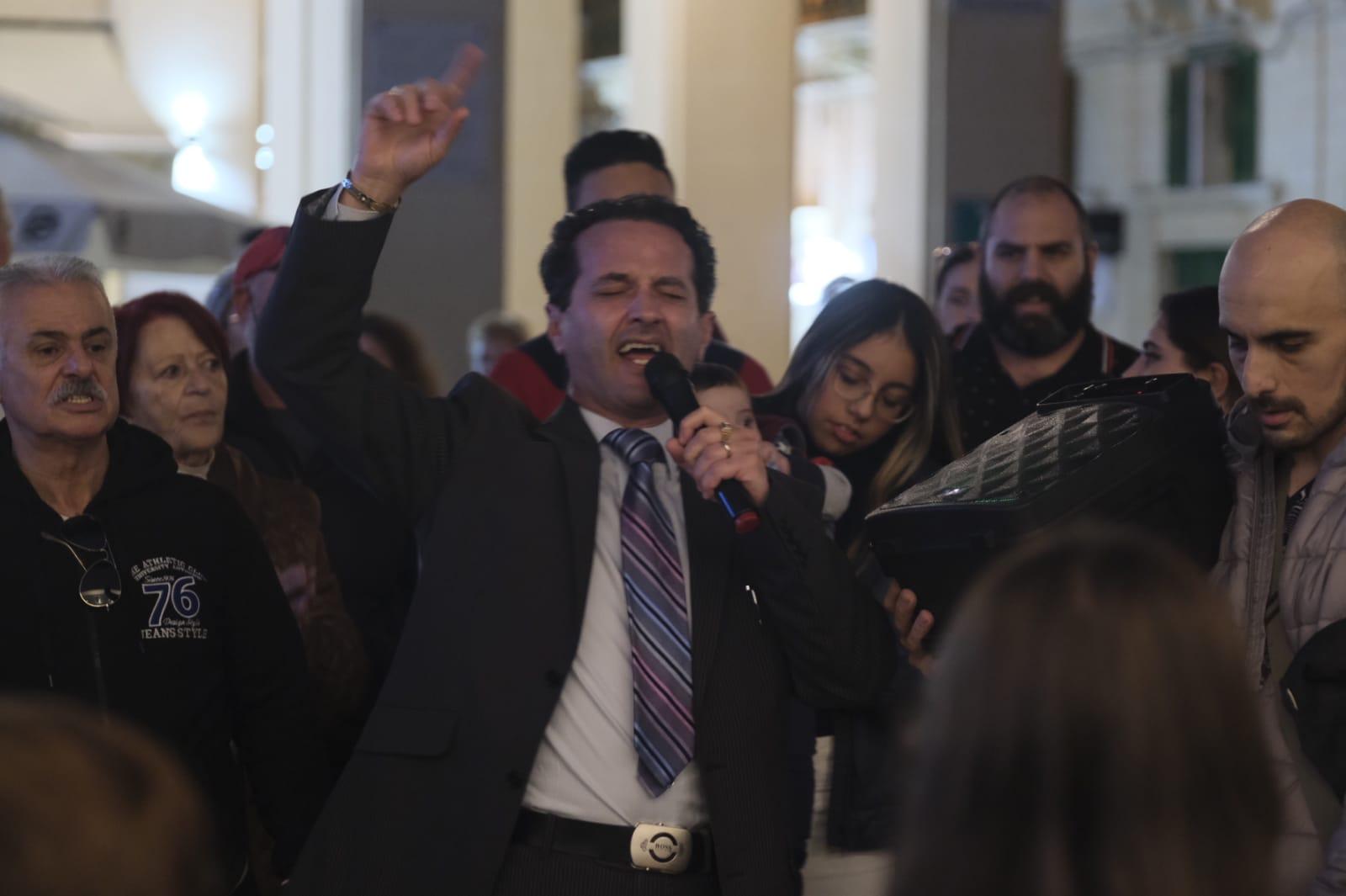 As demonstrators marched, volunteers walked around with buckets, soliciting donations. An organiser told the crowd that money collected would be used to fund their anti-abortion campaign.

A variety of pop songs played over a speaker system set up for the event. Selected tracks included Opus’ ‘Life is Life’ and The Human League’s ‘Don’t You Want Me Baby’. 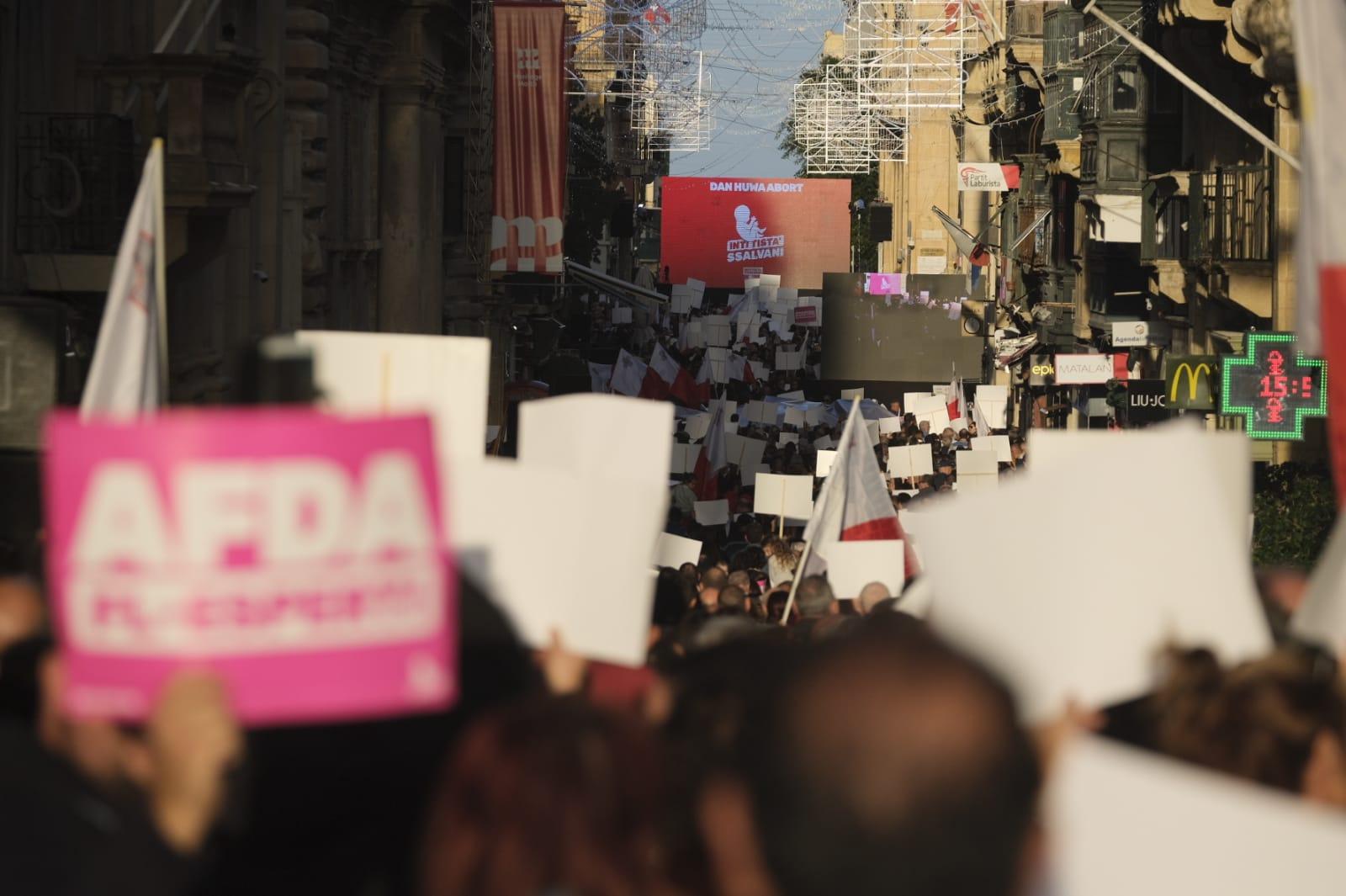 Speeches were preceded by a moment of silence in memory of Bernice Cassar, a mother-of-two murdered two weeks ago, and JeanPaul Sofia, a 20-year-old worker who died in a construction site collapse on Saturday.

Coleiro Preca told the crowd that she wanted the proposed amendment altered to set minds at rest.

"The lack of clarity in this amendment concerns me and many others," she said. "It is not putting our mind at rest that abortion will not enter our country.”

The issue, she said, cut across political or religious divisions, and merited serious and mature discussion. 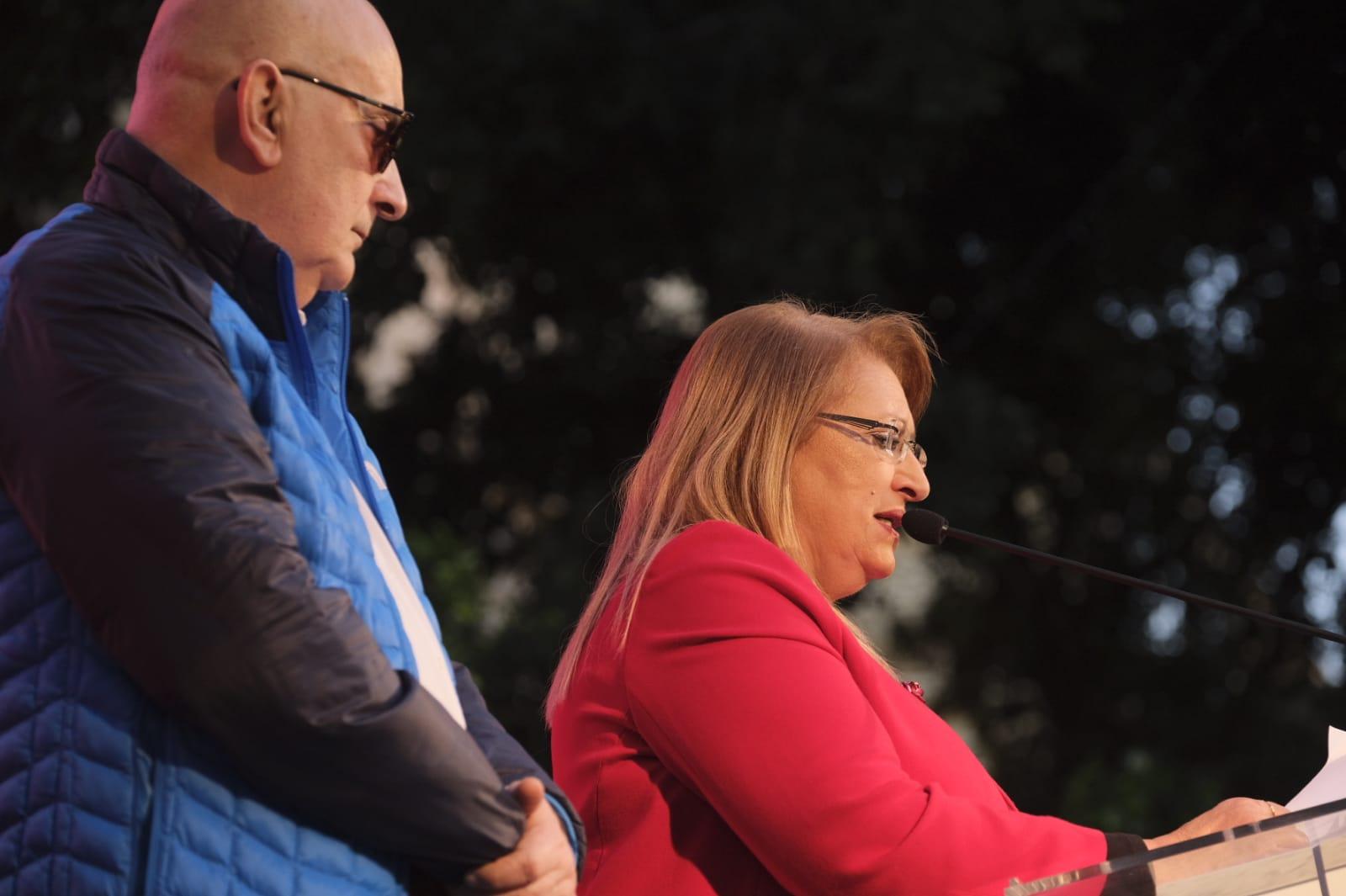 "We appeal with the government to meet with experts, civil organisations, to discuss with the stakeholders and to take note of the position paper," Coleiro Preca said, referencing a position paper published by a group of academics and endorsed by herself and a collection of NGOs.

The former president also urged the media to be “ethical” in its reporting and to reflect “the rights of the mother and the child that is without a voice."

In a video call, retired judge Giovanni Bonello said the new law would open the door to "abortion on demand".

Women, doctors and nurses were already protected by the law in its current guise, he argued.

"No nurse, no doctor, or woman was taken to court because the pregnancy was terminated to safeguard the mothers life," Bonello said.

Speaking on behalf of I See Life Group, Maria Formosa said they were there to speak up for the unborn.

"With an abortion you always lose a life," she said.

"We know there are women who suffer from many problems, health and social problems, but abortion is not the answer. The answer is to provide the right support."

“Nights away from Christmas, this amendment has come up, to kill a baby, without any form of discussion,” she said.

The amendments presented by the government were full of “vague” and “unclear” words, she said, and made no mention of the life of the unborn.

"This is not a door or window to abortion, but a runway to abortion," she said. "We safeguard so many minorities, so many laws to protect animals, the environment, laws protect turtle eggs- but we don't support the life in a womb?" 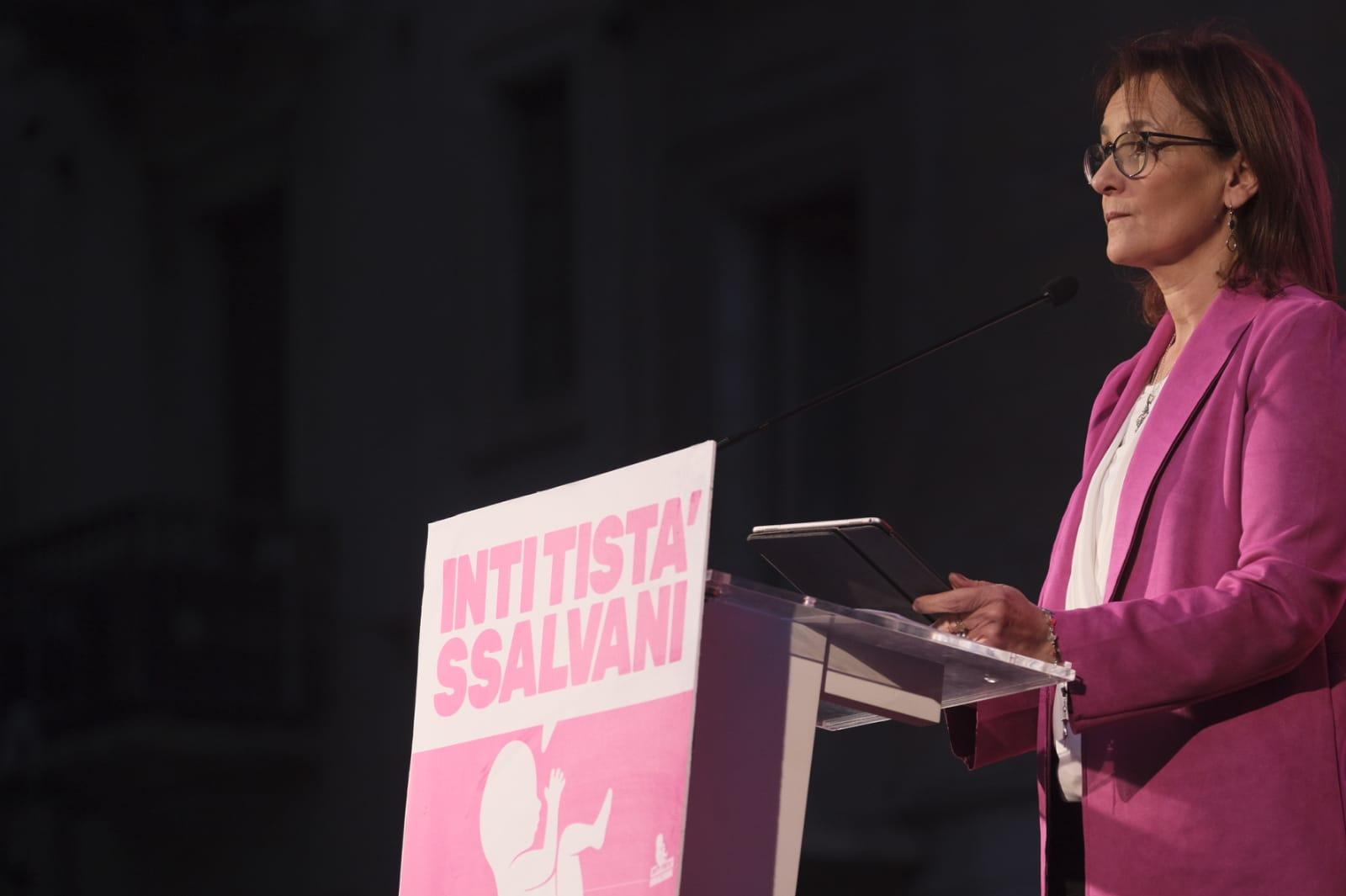 Sciberras asked whether the law was being rushed through parliament because Andrea Prudente, the woman whose predicament spurred lawmakers to draft the amendments, was now suing the government.

She called for MPs to represent the people's concerns and said the Life Network Foundation would consider taking legal action should the amendments be forced through parliament.

Sciberras also announced that the Foundation would be holding a vigil on Wednesday,  December 7 at 6pm in front of Parliament. Anyone attending should bring red candles, she said.

Why are demonstrators protesting?

A bill that will make abortion legal when a pregnant woman’s life is at risk or her health is in “grave jeopardy” is currently being discussed in parliament.

The amendments,  first announced last month, are intended to free doctors and pregnant women from the threat of criminal prosecution if a pregnancy is terminated for health-related reasons.

The crowd that gathered in Valletta's Castille square spilled out onto neighbouring streets.

Malta is the only EU country that has a total ban on abortion and under Malta’s criminal code, anyone who seeks or helps with an abortion can be sentenced from 18 months to three years in prison.

Prime Minister Robert Abela has said that individual doctors will be responsible for deciding when a woman's health or life is in "grave jeopardy." 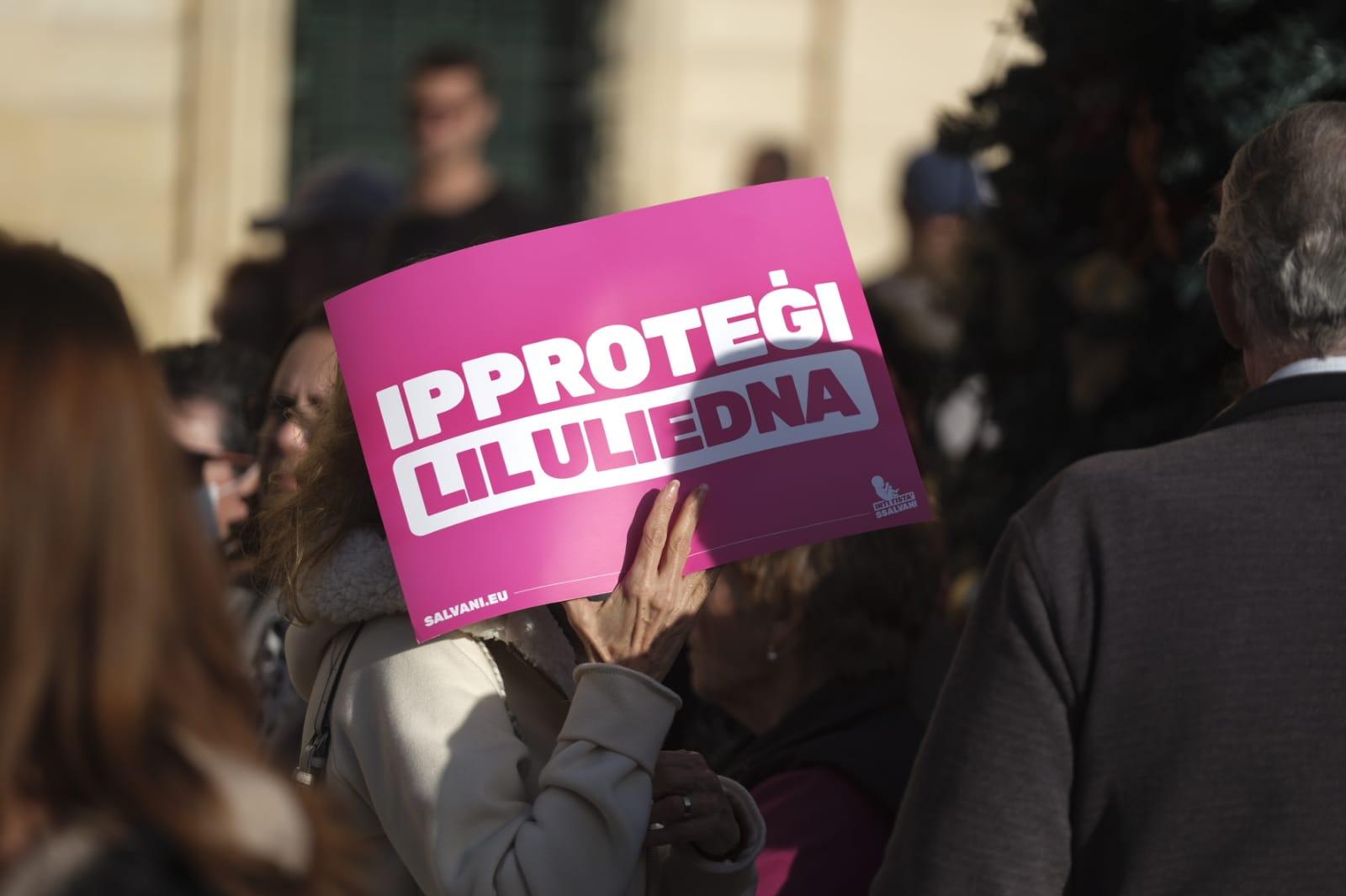 A demonstrator holds up a placard that reads 'protect our children'. Photo: Jonathan Borg

While the government has argued that the amendments are intended to protect doctors and mothers in extreme - and rare- cases, critics say the wording of the amendments is so vague that it will lead to abortion being introduced into law.

They say the government is rushing through the legal changes with no public discussion and worry that the amendments' wording would make it possible to get an abortion for trivial reasons or based on a mental health diagnosis. 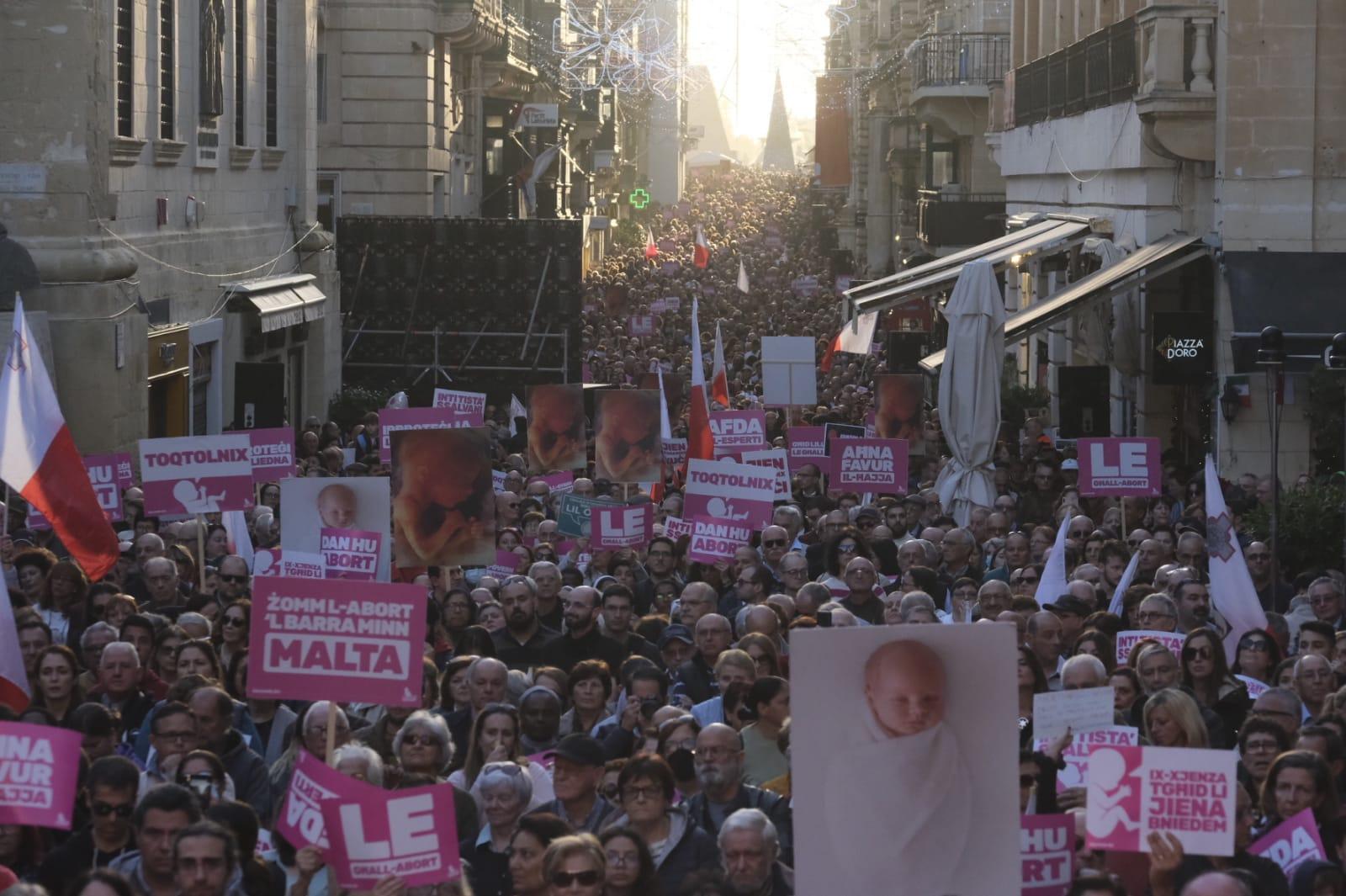 Along with the pro-life movement, the Church and the Opposition oppose the reform. Another 44 organisations, over 80 academics, and 450 doctors also oppose the legal changes proposed by the government.