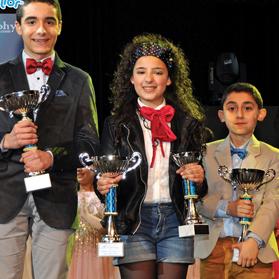 Three singers were chosen to represent Malta at the San Remo Junior competition that will be held on Wednesday at the Ariston Theatre in Italy.

The singers, who were chosen during the San Remo Junior Malta selection process that took place last week, are Albert-Lauren Agius and Christina Magrin (students of Gillian Attard at La Voix Academy) and Isaac Mercieca (student of Pamela Bezzina at Vocal Booth Studios).

Prizes were also given to those chosen by the public viewers on television and the audience in the hall, as well as the categorical results chosen by a special kids’ jury. The show, which was held at the Hilton Malta, was hosted by Elaine Saliba with the support of magician Gwylim Bugeja.

Twenty-five singers took part in the show, which also featured a number of other well-known names like Kurt Calleja, Destiny Chukunyere, Monia Russo, Laetitia Amodio and winner of Holland’s Got Talent 2014 Amira Willighagen.