Living with a disability poses a string of difficulties and challenges that must be overcome on a daily basis.

While certain measures aimed at improving the standard of living for persons with a disability have already been put in place both at EU and national levels, issues of accessibility continue to pose a series of challenges.

“Lacking access to basic day-to-day necessities – such as your grocer, supermarket, post office, accessible information or even pavements – makes it very difficult to enjoy a good standard of living,” says Amy Camilleri Zahra, assistant lecturer within the Department of Disability Studies at the University of Malta.

Highlighting the issue of accessibility as one of the major hurdles faced by people with a disability,

Camilleri Zahra says: “It’s very tiring to have to constantly challenge things that other people take for granted.”

Additionally, the lack of accessibility for people with a disability could prevent them from partaking in public life and leisure activities.

“In my case, as a mother of a young child and as a person with a disability, it’s impossible to access playgroups and activities for toddlers, which are often held in places that are inaccessible to people with disabilities,” she says.

Locally, for individuals whose disability impedes on their ability to work, having to rely on a disability pension could significantly lower their standard of living. According to Camilleri Zahra, the disability pension rate amounted to a mere 55 per cent of the national minimum wage for a number of years, making it difficult for them to live independently. In the 2015 Budget, the government pledged to raise this, gradually, to the same rate as the minimum wage.

The EU has been working towards ensuring that the fundamental rights, inclusive growth and social fairness for people of different abilities are well-integrated in all policy areas

The Maltese government has introduced schemes to improve the standard of living for people with a disability, such as through applying for a personal assistant to aid with getting ready in the morning and allowing those in employment to continue receiving an allowance.

Other facets that contribute to the standard of living, however, have been left on the back-burner. These include accessibility to the work place, which is made difficult due to inaccessible infrastructure and services. This sometimes leads to the requirement of personal transport arrangements as an adequate means of transportation, one of the ‘subtle expenses’ that people with a disability incur.

Taking into consideration the high cost of wheelchairs and medication, as well as the increasing rent prices, individuals with a disability may have no choice but to live with their families. As Camilleri Zahra points out, close family bonds can be beneficial, as these networks can provide assistance with shelter, transportation and food. Limiting their choice to be able to live independently, however, is considered a hindrance on their standard of living.

“Some disabled people living on a disability pension can barely go on a yearly holiday, as they cannot stay in a three-star hotel since there is no accessibility for people in a wheelchair, and they cannot afford to stay in a five-star hotel.”

Camilleri Zahra suggests that social workers should be well-informed about the newly available services for people with disabilities, and that improvements need to be made with regards to the reliability of information found online.

There is also the issue of visibility – people with disabilities need to be in the public eye, so their needs, challenges and value are visible to all. In comments given to the Times of Malta last month, the Commissioner for People with a Disability Oliver Scicluna said that if people with a disability were elected to Parliament, politicians would no longer do what they thought benefit disabled people as disabled people themselves would be making the decisions.

“Policies and legislation would foresee the rights of people with a disability from inception,” he told the Times of Malta.

The EU has been working towards ensuring the fundamental rights, inclusive growth and social fairness for people of different abilities are well-integrated in all policy areas. It believes in implementing strategies to eliminate barriers that prevent people with disabilities from participating fully in society and enjoying their rights.

The aim of the European Disability Strategy 2010-2020, therefore, has been to frame actions in support of the UN Convention on the Rights of Persons with Disabilities (UNCRPD). Thus, the EU objectives focus on eight primary areas: accessibility, participation, equality, employment, education and training, social protection, health and external action to promote the rights of people with disabilities in international development programmes.

According to the most recent Maltese Census (2011), 8.55 per cent of the Maltese population have a disability. In keeping with the UNCRPD, the Malta National Disability Strategy – which is still at consultation stage – set out to address the needs of people living with disabilities, as well as their families. In the meantime, other guidelines were launched and updated, including regulatory standards for those providing residential services for persons with disabilities, launched last February. The standards are set to be a guideline for organisations, entities or companies that provide assistance to those with disabilities.

“While various EU directives and funds have facilitated daily life for people living with disabilities, these have also been subject to some criticism,” adds Camilleri Zahra. “Still, I think the positive work can be seen in the projects related to raising awareness, training and exchanges.” Camilleri Zahra also refers to the upcoming European Parliament elections and the efforts to make these inclusive of persons with disabilities.

“Locally, something that is rather imminent, especially with an upcoming election, is the removal of the reservation of Article 29 of Convention on the Rights of Persons with Disabilities, which states that disabled people who cannot write, or see, still need to submit their vote in front of the electoral commissioners of all parties. I believe that this needs to be changed to secret voting as proposed in 2012, as, unfortunately, this is a deterrent for people to vote.”

This issue was highlighted by the European Disability Forum - an umbrella organisation of persons with disabilities - whose president, Yannis Vardakastanis, said: “Voting, and standing for elections, are two of the most important rights we have.” 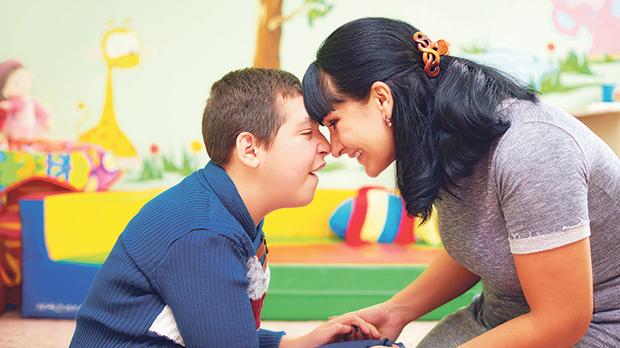 Amy Camilleri Zahra suggests that social workers should be well-informed about the newly available services for people with disabilities.

Around 80 million people in the EU live with a disability to some degree. Due to the ageing of the population, this figure is expected to increase to 120 million by 2020.

Approved by the European Parliament as co-legislator with the Council on March 13 and signed by the presidents of the respective institutions on April 17, the European Accessibility Act (EAA) aims to make key products – like smartphones, ticketing machines, e-books and e-commerce, travel information, computers and banking services – more accessible to people with disabilities.

While the EAA outlines what needs to be accessible, it does not include detailed technical rules, thus paving the way for innovative solutions from businesses and other actors .

Moreover, the EAA encourages member states to align their diverging requirements with regards to ramps, doors, staircases and public toilets – such requirements currently vary across EU countries. This will make it easier for persons with a disability to move around the EU.

The EAA also fulfilled two important demands from the disability movement: electronic telecommunications and the 112-emergency number will become accessible to everyone in the EU, including deaf people. EAA requirements will also support the public procurement rules for products and services covered by the Act, so that public authorities  will procure products, services and facilities that are accessible to all.

The Annual Convention for Inclusive Growth is an action-oriented platform bringing together civil society organisations and policymakers at EU level to discuss how to achieve inclusive growth. Its fourth edition will take place in Brussels on May 20, 2019.

This year, the Convention  will focus on the future of a social Europe. It will serve as an opportunity to reflect on the EU’s social dimension and on how social models in the EU can be adapted so as to address current and future challenges. The outcome of the discussions will shape the convention’s policy recommendations.

Accessibility: make goods and services accessible to people with disabilities and promote the market for assistive devices.

Participation: ensure that people with disabilities enjoy all benefits of EU citizenship; remove barriers to equal participation in public life and leisure activities; promote the provision of quality community-based services.

Equality: combat discrimination based on disability and promote equal opportunities.

Employment: raise the share of persons with disabilities working in the open labour market. They represent one-sixth of the EU’s overall working-age population, but their employment rate is comparatively low.

External action: promote the rights of people with disabilities in the EU enlargement and international development programmes.