Prices for all types of property except for terraced houses fell marginally last year, a new report has found, with townhouses and houses of character experiencing the biggest proportional drop in prices.

Statistics published by property market analysts Djar and EY concludes that between 2019 and 2020 listing prices for townhouses fell by 1.4 per cent followed by houses of character, which dropped by 0.5 per cent during the same time. Price listings for apartments and penthouses fell by 0.1 per cent.

Listing prices for terraced houses, on the other hand, bucked the trend and remained in positive territory, increasing by 0.4 per cent.

Properties valued at €1.5m or more were excluded from the analysis. Report analysts noted that higher-value properties analysed saw their prices fall by a greater margin during the period under review than lower-valued properties. 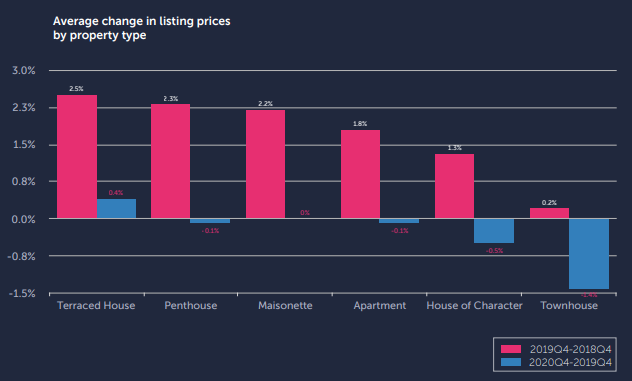 Where did prices rise and fall?

The localities that saw a highest average price increase on property listings were Għasri (8.1 per cent), Manikata (7.2 per cent) and Kalkara (6.7 per cent).

The report also found that prices per square metre began to plateau and stabilise over 2019 and 2020, following a steady increase upwards starting from 2017.

The lowest average price per square metre rates were in Gozo, at roughly €1,600/sqm, whereas the highest rate in the Northern Harbour region exceeds €3,000/sqm.

The uncertainty of the COVID-19 pandemic could have accounted for a drop in the number of listings on the market which started in the second quarter of 2020, as indicators showed a number of properties were withdrawn from the market at that time.

Listings increased later on in the year, suggesting that property owners preferred to withdraw their properties from the sale market rather than revise the price downwards, even as online listings continued to increase towards the end of the year.

The report suggests that government measures supporting the market could have been a contributing factor.

Types of property on the local market 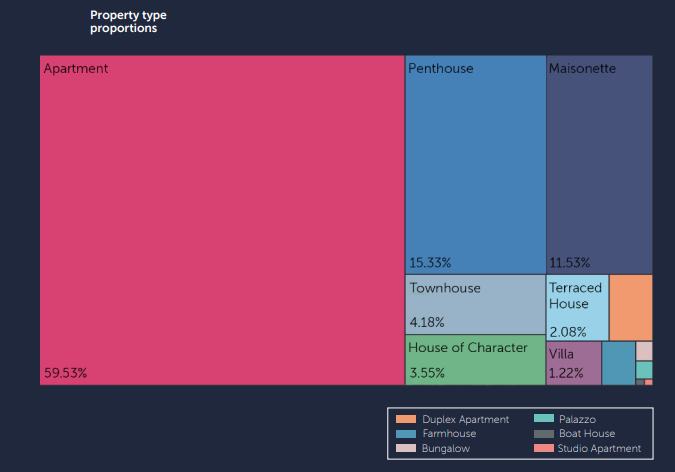 The vast majority of all property (90 per cent) is sold already built, while some 10 per cent is sold on plan.

The average sized apartment ranged from 65 sqm for one bedroom, 98 sqm for two bedrooms and 140 sqm for 3 bedrooms. Figures show that 70 per cent of property listings have an area of less than 150 sqm while a further 25 per cent have less than 100 sqm of space.

See the full report in the PDF below.