Nigeria's Ngozi Okonjo-Iweala was appointed Monday as the first female and first African head of the beleaguered World Trade Organization, saying a stronger WTO would be vital for the global coronavirus recovery.

The near-paralysed institution desperately needs a kick-start -- something Okonjo-Iweala immediately addressed after being confirmed in the job.

"A strong WTO is vital if we are to recover fully and rapidly from the devastation wrought by the Covid-19 pandemic," the 66-year-old economist said in a statement.

"I look forward to working with members to shape and implement the policy responses we need to get the global economy going again.

"Our organisation faces a great many challenges but working together we can collectively make the WTO stronger, more agile and better adapted to the realities of today."

South Korean Trade Minister Yoo Myung-hee had been the only other remaining contender for the post but pulled out when it became clear that new US President Joe Biden was swinging firmly behind Okonjo-Iweala's candidacy.

The organisation has been leaderless since Brazilian career diplomat Roberto Azevedo stepped down last August, a year ahead of schedule.

Twice Nigeria's finance minister and its first woman foreign minister, Ngozi Okonjo-Iweala has been described as a trailblazer.

The 66-year-old made more history on Monday when she was appointed as the first African and woman to head the World Trade Organization (WTO).

Aside from her time in public office, the development economist also spent a quarter-century at the World Bank -- rising to be managing director and running for the top role in 2012.

"I think she has delivered, whether in Nigeria or in other countries where she worked," Idayat Hassan of the Centre for Democracy and Development research and advocacy group told AFP.

Born in 1954 in Ogwashi Ukwu, in Delta State, western Nigeria, her father is a traditional ruler. She spent much of her life in the United States, graduating from Massachusetts Institute of Technology (MIT) and Harvard, where she sent her four children.

"She is not just liked in Nigeria, she is loved, because she is a symbol, and people are gunning for her because of what she represents for womanhood," said Hassan.

Not everyone agrees her track record is impeccable.

"Okonjo-Iweala may have done some box-checking technocratic transparency reforms in her ministry but the fact is, nearly a billion dollars a month were going missing from oil revenues when she was finance minister," said Sarah Chayes, author of Thieves of State, a book about corruption.

"I think it's a shame she is even being considered for the role," Chayes said in an interview last year.

"There is an appetite for this kind of good news story at a time when diversity issues are paramount, being female and black doesn't hurt."

The former minister has portrayed herself as a champion against Nigeria's rampant corruption -- and says her own mother was even kidnapped over her attempts to tackle the scourge.

But critics insist she should have done more to stop it while in power.

"At the very least, she had the opportunity to resign from office and expose the corruption," said Olanrewaju Suraju, from the Human and Environmental Development Agenda campaign group.

"Rather, she kept quiet and allowed high-level corruption to fester under the regime, only to complain after leaving office." 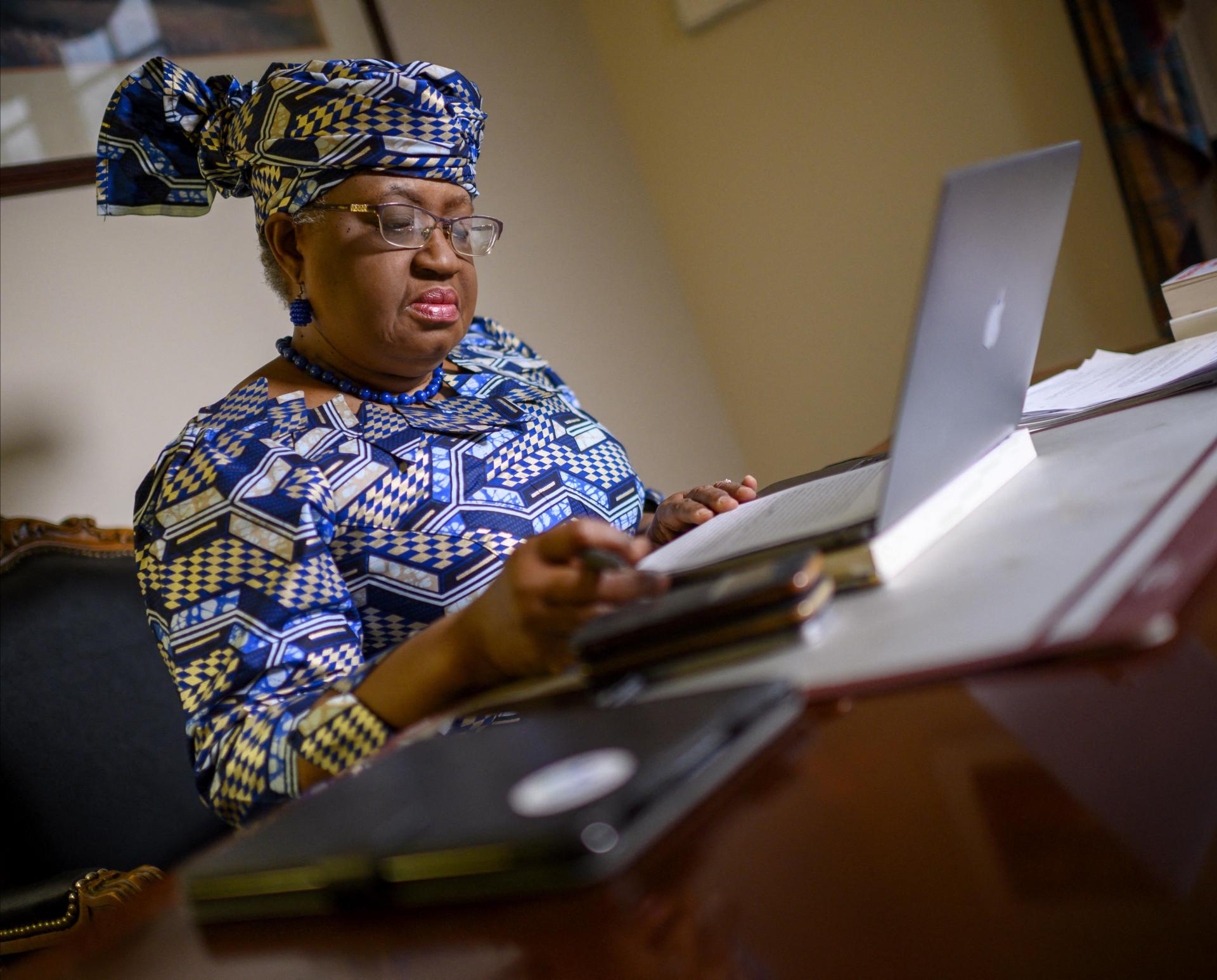 Ngozi Okonjo-Iweala works on her acceptance speech ahead of her appointment as head of the WTO. Photo: AFP

Okonjo-Iweala has also brushed off claims she lacks experience as a trade minister or negotiator.

"I've been doing that all my life, working on trade policy issues," she said during a webinar organised by Chatham House in July.

"Most of all," she said, the choice for director general should go beyond technical skills, "you need boldness, courage".

She was recently named the African Union's special envoy to mobilise international support for the continent's efforts to address the economic fallout of the coronavirus pandemic.

Okonjo-Iweala has warned that growing protectionism and nationalism have been spurred on by the crisis and insists barriers need to be lowered to help the world recover.

"One way to ensure the adequate supply and equitable distribution of vaccines is to remove some of the barriers created by intellectual property and technology transfer laws," she wrote in April in Foreign Affairs magazine.