A transgender woman has claimed that she was punched in the face at an Msida bus stop in an apparent homophobic attack.

The woman, who was returning home from work, stopped on the Kulleġġ bus stop on the Msida waterfront at a pastizzeria on Sunday.

A man who frequents the shop often, the woman said, took issue with her presence and called her a homophobic slur.

She said that the man became violent when she answered back. He hit and punched her in the face and pulled out chunks of her hair. 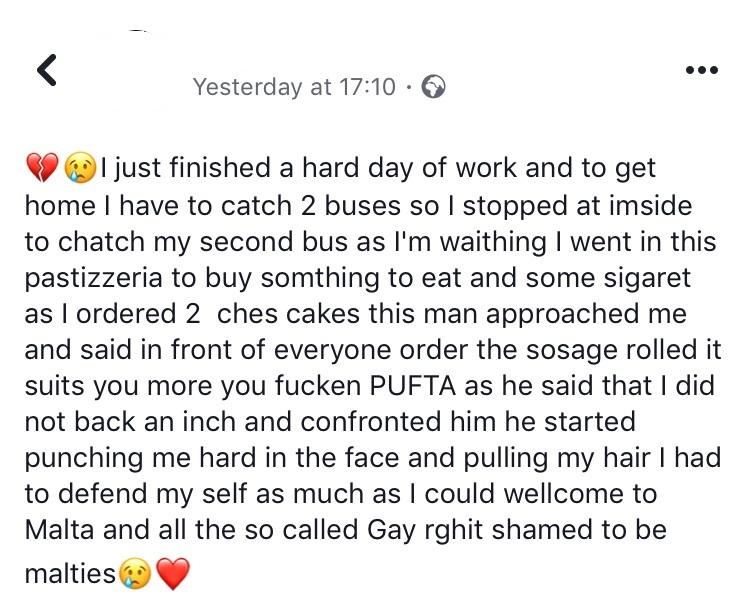 “He raised his hand to me, he punched me in the face and ripped out my hair,” she said.

“I tried to defend myself and that’s when people started to intervene.”

The woman managed to snap a picture of her alleged attacker after the fact, which she posted onto social media.

A picture of the alleged aggressor taken by victim

Speaking to Times of Malta, the woman said that while LGBTIQ people enjoyed many rights on paper, the reality on the ground was that attacks such as this one happen with some frequency to several people in the community.

“The thing that hurts me the most is that transgender people who came out in the 80s and 90’s cannot move forward. They keep getting attacked and labelled with their past, they are ignored by society and it doesn’t get better for them.”

The woman said she would not be pursuing the matter with the police as she has been in trouble with the law in the past and going back to the courts would only be "punishing" herself.

“I’m trying my best and I’m not hurting anyone, just let me live,” she said.

A spokesman for the Malta LGBTIQ Rights Movement (MGRM) said that it is “unacceptable that in this day and age we still come across shameless acts of abuse in broad daylight, right in front of everybody.”

The woman’s identity is being withheld at her own request.