The Sliema Local Council is challenging Transport Malta (TM) to explain why it made a U-turn on a planning application for chairs and tables to be placed in Rudolph Street after having deemed this to be “high risk” twice before.

Application PA/04401/21, for tables, chairs and a timber demountable platform with bollards to be installed outside Sea Salt takeaway on the corner with Triq Guzè Ellul Mercer in Sliema, was recently approved by the Planning Board.

This came despite a recommended decision to refuse permission and objections filed by the council and environment NGO Flimkien Għal Ambjent Aħjar.

They argued it would breach the policy on outdoor catering areas in public open spaces.

“It is unbelievable that TM objected once, twice, but lo and behold, on the third time, they issued a ‘no objection’,” said Sliema councillor Paul Radmilli.

“Somehow, the safety issues and the lack of parking got resolved,” he added.

The council is appealing the decision and will be requesting TM to testify in the hearing.

In July, TM objected to a permit being granted, citing the “high risk for pedestrians and clients in the event of a traffic accident”; “high risk of visibility for drivers” and “lack of pedestrian safety when crossing the road to render the service”. 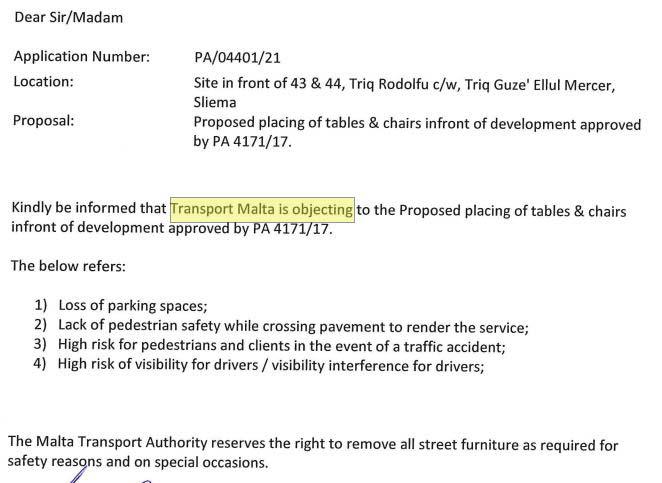 In July, Transport Malta said it objected to the plans...

Its objection was also based on the loss of parking spaces in the area.

In August, it confirmed its objection on the same grounds in a second letter to the Planning Authority. 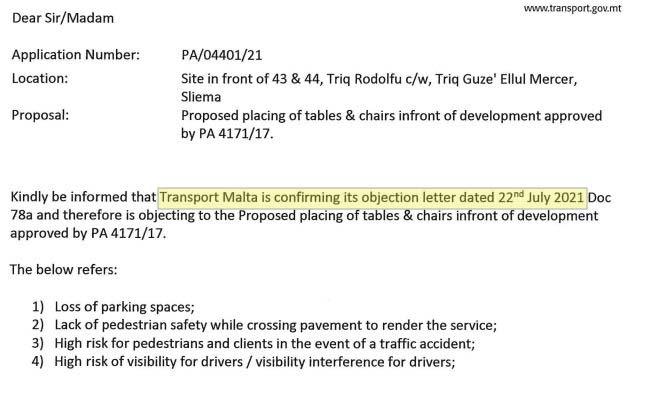 ... and confirmed that objection in another letter one month later.

But two months later, it found no objection to the proposal to place chairs and tables in front of a takeaway in 43/44, Rudolph Street.

This was subject to a number of conditions, including that the street furniture would not pose a safety hazard to pedestrians.

Transport Malta’s concerns this time revolved around the obstruction caused by the chairs and tables to the free flow of pedestrians and that tents, umbrellas and outdoor heating equipment would not protrude beyond the allocated area. 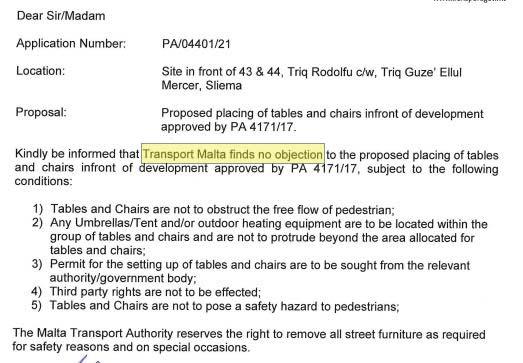 In October, Transport Malta changed its position and said it no longer objected.

Radmilli has written to TM requesting answers, “should, God forbid, an accident happen to patrons, drivers or pedestrians” in view of the placing of the platform.

“Let us not have a repeat of the Paqpaqli għall-Istrina tragedy (in which spectators were injured when a supercar veered off the tracks in 2015), where nobody takes responsibility for safety concerns,” he wrote.

In his e-mail to TM’s deputy CEO Kevin Farrugia last month, copying in Transport Minister Ian Borg, the local council pointed out that TM had objected “forcefully” to the platform for tables and chairs in the residential road on the grounds of safety for drivers and pedestrians, as well as a lack of parking availability, before issuing a no objection.

“What exactly happened between the first two objections and the third reply? The street is the same; the danger for drivers exiting from Triq

Guzè Ellul Mercer, with an interrupted line of vision, is the same,” Radmilli asked.

“So, how do you explain that two objections were submitted providing a long list of concerns and then a third one ignored those concerns?”

Farrugia has replied that he would “look into the matter and revert”, but the local council has yet to receive the explanation.