The tremor was felt in Malta and as far away as Libya.

Greece's Geodynamic Institute reported the magnitude as 6.4, and put the quake 50 km south of the island of Zakynthos.

The epicentre was in the Ionian Sea, about 130 km southwest of Patras in the Peloponnese, the USGS said.

It was felt particularly on Zakynthos, also known as Zante, which was rattled by a series of strong aftershocks, the highest at 5.6, and where power was briefly disrupted.

Three people were taken to hospital, two of them slightly injured, a spokesman for Greece's civil protection agency told Reuters.

News websites said a 15th-century monastery had been damaged, with one, displaying images of masonry that had fallen from a building facade and items dislodged from shelves in shops.

The power cut and slight damage to the port of Zakynthos, near the epicentre would not affect port operations, officials said.

"We are not facing any particular problems," Zakynthos mayor Pavlos Kolokotsas told Greek state broadcaster ERT. "Calm is being restored."

Italy's Il Messaggero news site said the quake had been felt hundreds of kilometres away in southern Italy. Firefighters in Calabria, Puglia and Sicily received thousands of telephone calls seeking information about the quake.

"The energy unleashed, based on the angle of the faultline, fanned out towards Italy," said Efthymios Lekkas, head of Greece's Earthquake Planning and Protection Organization.

Extensive damage was avoided because quake-prone Zakynthos had adopted seismic protection codes in construction, he added.

An official confirmed that a tsunami alert had been lifted. The EMSC European quake agency said sea levels had risen slightly, by about 20 cm but the increase could be higher locally.

The quake was fairly shallow, according to the USGS, just 14 km below the seabed, which would have amplified shaking.

It struck at 1.54 am. Greece straddles two tectonic plates and often suffers earthquakes.

Several people from different parts of Malta took to social media to say they had felt the tremor.

"I was watching TV when I felt a light rocking of the sofa. It lasted only 3-4 seconds but it was enough to keep me awake for the rest of the night as I’ve never experienced anything like it in my life," a reader from Xemxija said in a message to the Times of Malta.

Another reader, from Birzebbuġa, said the tremor lasted several seconds.

Pawlina Pizzuto Borg, from Xemxija, said on the Times of Malta Facebook page that it felt like someone literally shook her bed.

The Seismic Monitoring and Research Group of the University of Malta said a foreshock with a magnitude of 4.9 struck at 10.22m. The main 6.5 magnitude earthquake occurred 32 minutes later and was felt in Malta. 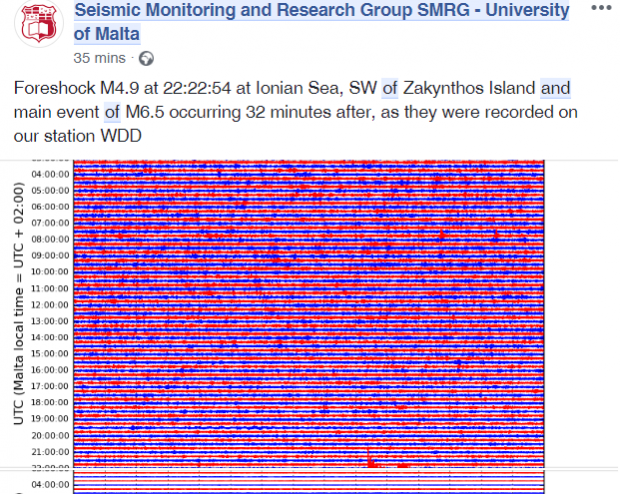