After the capitulation of the French Occupation in 1800, the Maltese islands passed under British authority, and from the outset, General Henry Pigot, who was entrusted with supreme authority over the islands, was explicitly ordered to confirm all ecclesiastical rights, privileges and immunities of the Roman Catholic Church and to acknowledge the Bishop of Malta as the head of the Maltese Church.

Consequently, in 1801, Pigot issued a proclamation expressing, inter alia, his view that due regard to religion and respect to its ministers would bring happiness to the Maltese population, and assured them full enjoyment of their religion, their property and their freedom. It is a moot point whether these sentiments by the British authorities stemmed from a genuine appreciation of Malta’s Roman Catholic religion or whether they were intended to appease the locals and ensure they would not cause any trouble to the colonisers.

Whatever the reason, a good rapport was established between the British governors and the Maltese ecclesiastical authorities throughout the 19th century, with the occasional, but rare, incident of friction, such as the rumoured attempt by the Anglican Church to take over St John’s Co-Cathedral, which was, of course, strongly opposed by the Maltese; or the incident which could have ended tragically when the governor, Sir Patrick Stuart, a staunch Anglican, prohibited the holding Carnival festivities on a Sunday.

The excellent relations continued in spite of repeated efforts by a Protestant organisation, styled ‘The Malta Bible Society’ to distribute unauthorised versions of the Bible and a translation of the Gospel of St John in Maltese. These attempts were frustrated by the bishop with the assistance of the British government.

So intent were the British authorities to appease the local population that they went to great lengths in actively promoting religious functions and festivities. A case in point relates to agreements between various ecclesiastical entities and the state concerning the participation of military personnel in religious festivities.

It became customary for the holders of such feasts to request the participation of British military personnel in these celebrations by attending processions, tolling bells and firing salutes, referred to as patteraroes. Such an application was made in 1823 by the chapter of the Co-Cathedral of St John on the occasion of the feast of Corpus Christi, in which attendance of troops and firing of patteraroes were requested.

In reply, the Chief Secretary to Government, Sir Richard Plasket, informed the Military Secretary, Captain Bayley, that he was directed by the lieutenant governor to ensure that “the same be complied with as last year”. Examples of similar requests and approvals concerned the feasts of the Madonna del Carmina (sic), the Vergine della Consolazione, the Sanctissimo Crocifisso and the Immaculate Conception, among others.

This collaboration between the Maltese Church and the British authorities proceeded without incident until the feast of St Lawrence in Vittoriosa in 1823. Approval was sought for salutes to be fired from Fort St Angelo and St Michael’s Tower, accompanied by the tolling of “the castle bells” on August 9 and 10.

The usual approval was given by the lieutenant governor on August 4, but the salutes from Fort St Michael were refused because of the vicinity of the Naval Arsenal (this caution no doubt arose from the memory of the disaster in 1806 when the Vittoriosa Polverista exploded, causing about 200 fatalities). 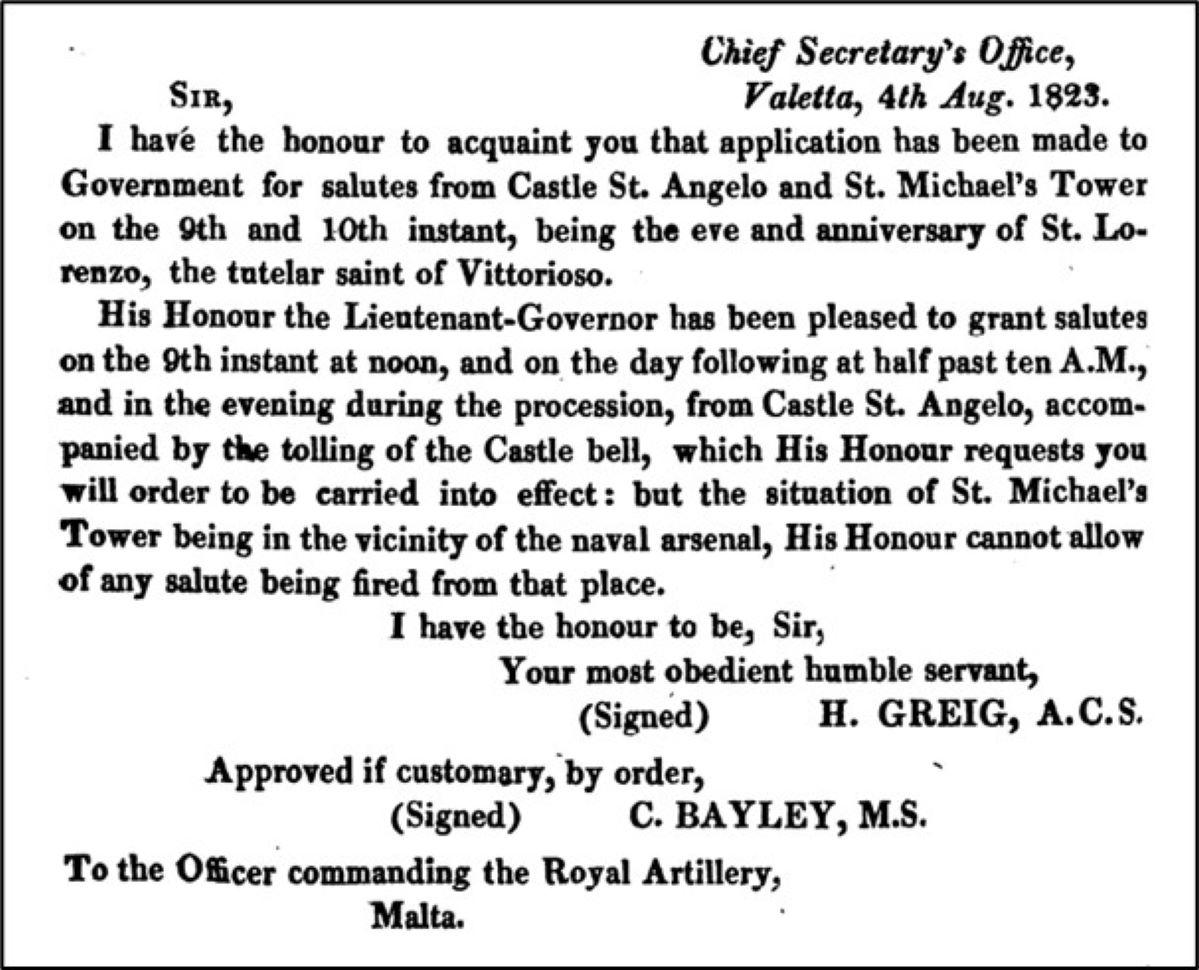 Approval of the request for the firing of salutes on the eve of the feast of St Lawrence in 1823.

Following this approval, Captain Thomas Atchison of the Royal Artillery was directed by the Acting Adjutant Lieut. John Somerville to proceed to St Angelo with as little delay as possible; on his arrival there he was “to apply to Lieut. Dawson for the letter which was forwarded to him requiring salutes to be fired on this day and tomorrow and that you will give directions for those salutes to be fired accordingly”.

Later that morning, Brevet-Major James Addams, Commanding Officer of the Royal Artillery in Malta, proceeded to Fort St Angelo and sent for Capt. Atchison and asked him whether he had received the orders via Lieut. Dawson and if he could obey them. Instead of replying, Atchison gave Major Addams a letter in which he pointed out that the orders required him “to carry into effect part of the ceremonies of idolatrous acts of worship” and that he felt that by taking part in these ceremonies, “I should then be relinquishing my most conscientious principles as a Christian and a Protestant”. He therefore asked to be exonerated from the execution of these orders.

Major Addams was taken aback and he took it upon himself to order the firing of the salutes. Lieut. Dawson had also expressed similar sentiments and refused to participate in the salutes and the bell-ringing. Clearly, Atchison had written the letter in collaboration with Lieut. Dawson. Nothing further transpired in the matter for several months until March 20, 1824, when Captain Atchison was formally charged.

The charge sheet reads as follows: “For disobedience of orders, insubordinate and unofficerlike conduct, in not carrying into execution the orders that were conveyed to him by Acting Adjutant Somerville, on or about the 9th of August last, desiring that he would give directions for firing salutes at Fort St Angelo the 9th and 10th of that month; –and for writing a letter dated the 9th of August, addressed to Major Addams, his commanding officer, hesitating and remonstrating against carrying the said orders into effect. The above conduct being highly subversive of military discipline, and holding forth a most dangerous example to the British army. (Signed) George Raitt, D.A.G.”

Lieutenant Dawson had already been charged and later court-martialled on March 1, 1824, with a guilty verdict leading to his dismissal from the Royal Artillery. Captain Atchison’s court martial followed soon after and started on March 24. That the odds were stacked against Atchison can be seen from the fact that the President of the Court was Colonel Rivarola, founder and commander of the Royal Malta Fencible Regiment. 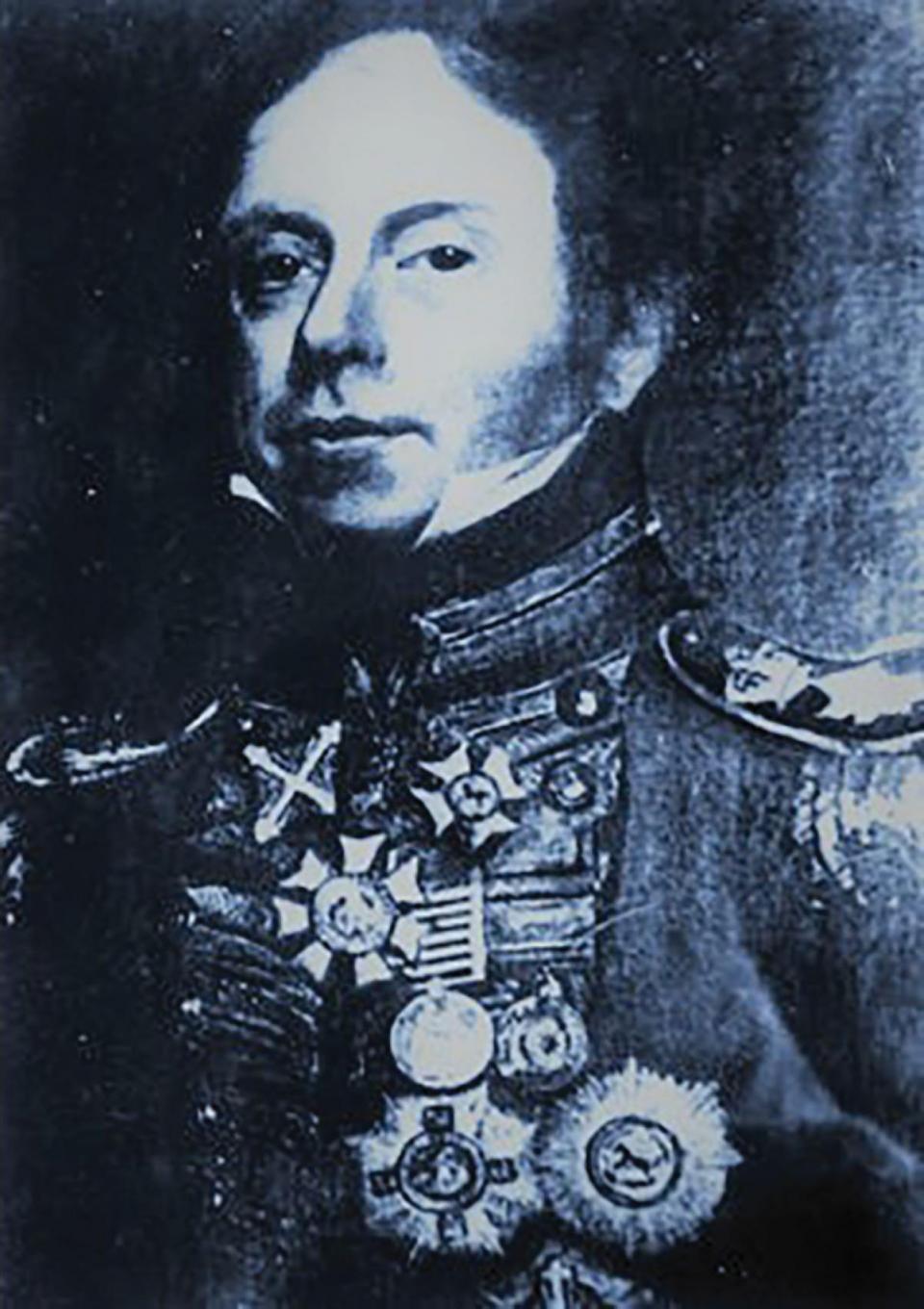 Count Francesco Rivarola was a Corsican who became an officer of the British Army, eventually reaching the rank of lieutenant-general. The fact that he was a practising Roman Catholic should have been enough to disqualify him from this court martial, but Atchison did not object. The prosecution’s opening statement outlined the events leading up to Atchison’s objection to carrying out the orders he had been given. Several witnesses then gave evidence and were cross-examined by Captain Atchison, who was conducting his own defence.

After the prosecution’s case was closed, the accused started to read his written statement of defence on March 31. After about an hour, the court intervened and ordered that parts of his statement should be expunged as they were considered to be “quite foreign to the charge”. These censored pages concerned what Captain Atchison considered to be the idolatry of the Roman Catholic religion and were very hostile to the Maltese ecclesiastical authorities. The accused completed his lengthy and spirited defence without calling any witnesses; in concluding he stated “I feel a most happy anticipation that when the just particulars of this affair shall be laid before our Sovereign, that I shall have his thanks, and not his censures”.

Several witnesses gave evidence and were cross-examined by Captain Atchison, who was conducting his own defence

These hopes were soon dashed, however, for on April 5 the court martial reached the conclusion that Captain Atchison was guilty of “conduct being highly subversive of military discipline, and holding forth a most dangerous example to the British army; being in breach of the Articles of War, does therefore sentence him, the prisoner, Capt. Thomas Atchison, of the Royal Artillery, to be DISMISSED his Majesty’s service.”

Atchison’s dismissal was discussed in both Houses of Parliament in 1829, 1830 and 1833. In 1829, the Duke of Wellington (then prime minister) defended the sentence of the court martial and agreed with Atchison’s dismissal. On July 17, 1833, the Hon. John Plumptre presented a petition by Captain Atchison in which the cashiered officer requested a revision of the sentence. Plumptre observed that he “was the last man in that House to use harsh terms, or encourage insubordination or disobedience to orders; but he must say, he thought it the most unjust and cruel case that had ever come before the public.”

In the ensuing debate, the overall tone of the Members of the House was in favour of Atchison, although the Earl of Darlington, spoke against the petition: to cries of “No! No!” from the other members, he stated that “every man who was a military man was bound to obey the orders given to him, let those orders be what they might”, later echoed by Lord Tennyson in The Charge of the Light Brigade: “Theirs not to make reply, Theirs not to reason why”. 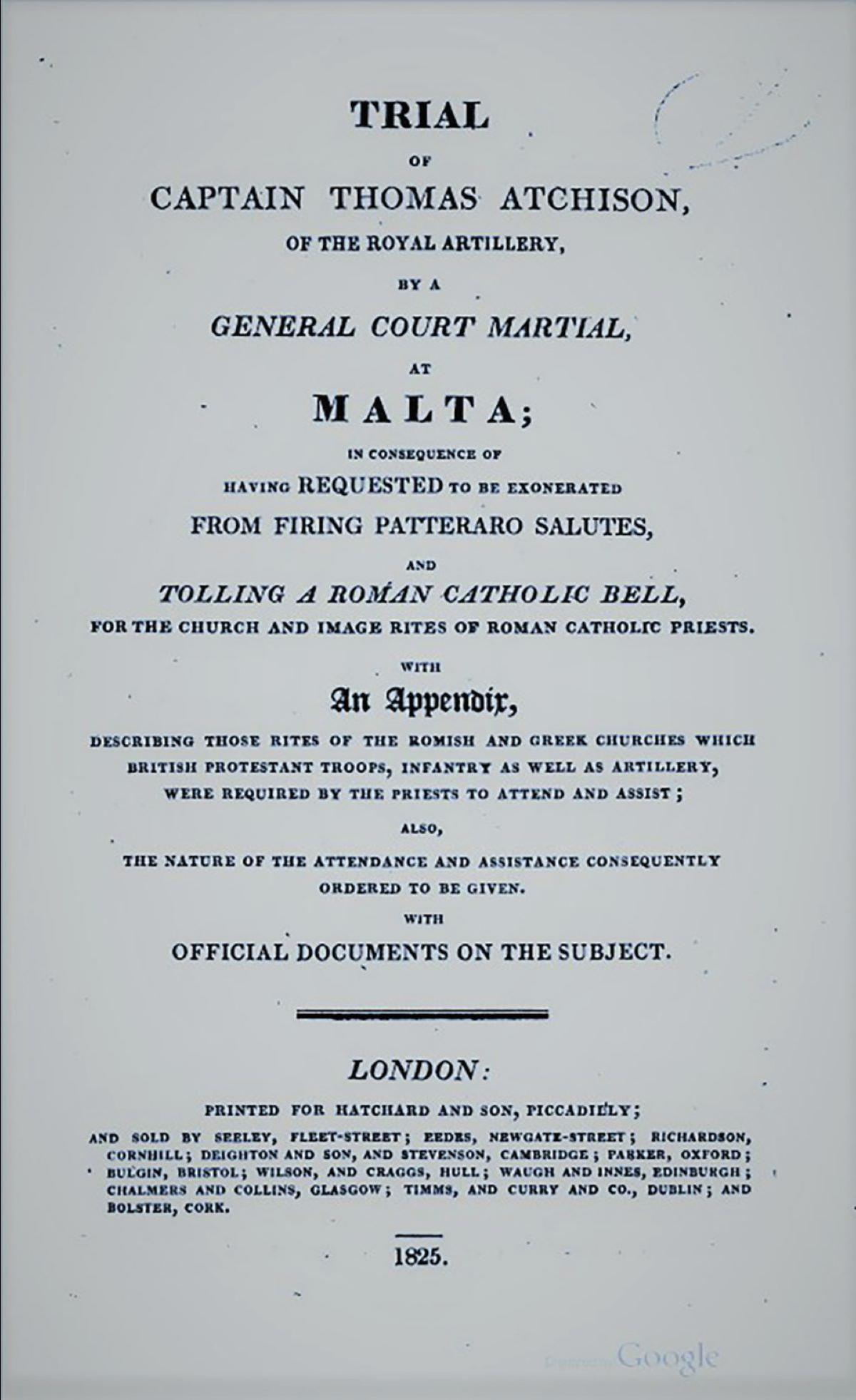 Title page of Captain Atchison’s 1825 publication of the proceedings of the court martial. 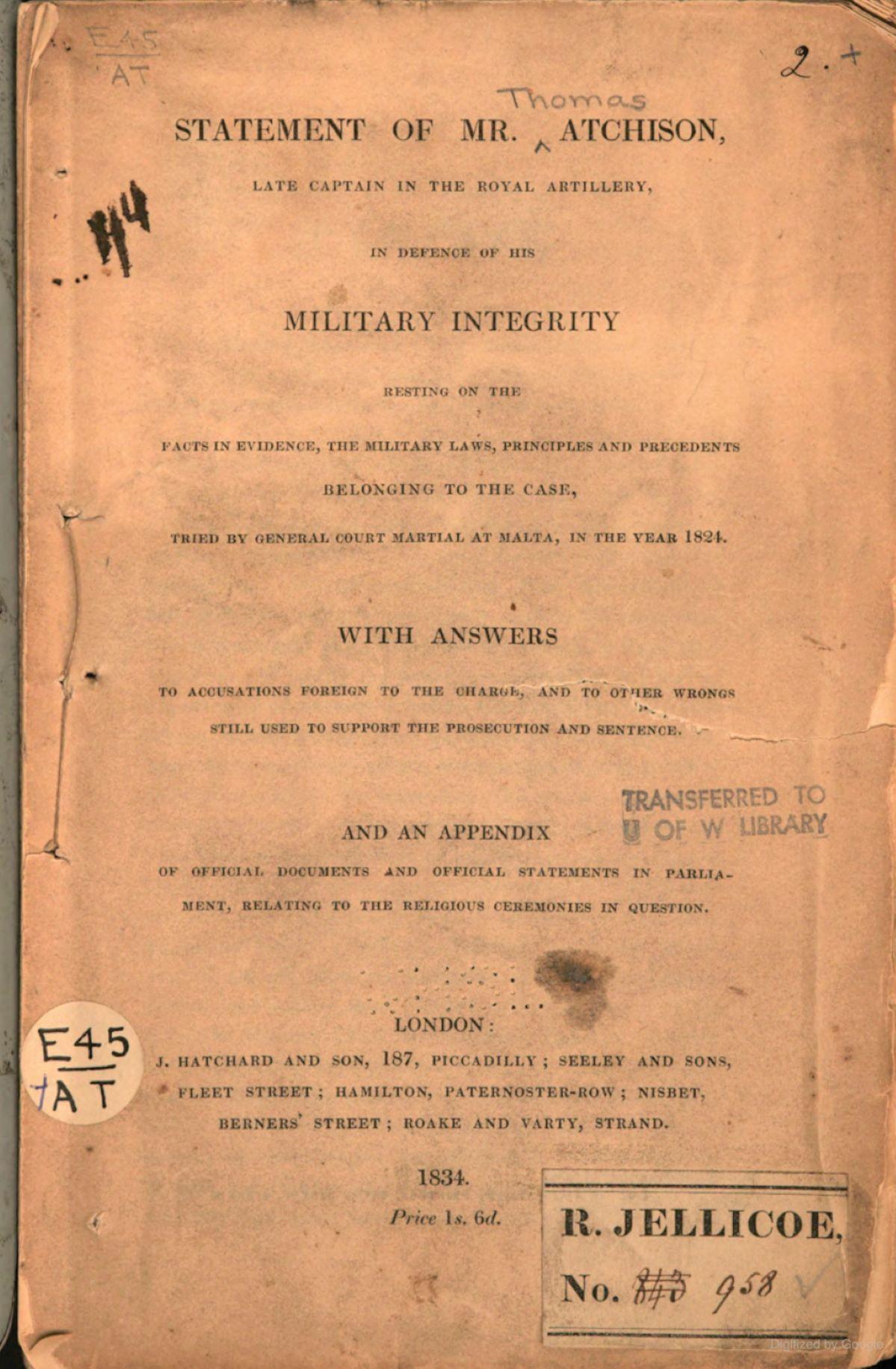 Statement by Captain Atchison in defence of his military integrity published in 1834.

The parliamentary debates came about after Captain Atchison had published a volume in his defence in 1825 – an account of the trial with an appendix “describing those rites of the Romish and Greek churches which Protestant Army officers were required by the priests to attend and assist”. Following the parliamentary debate, he published another “Statement” in 1834 defending his military integrity, which included all documentation related to the case. These two volumes provide a fascinating insight into the relations between the British Military Forces and the Roman Catholic Church authorities in Malta during the first quarter of the 19th century. They are both available online.