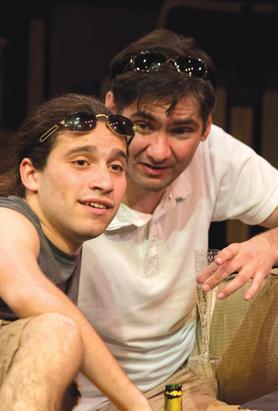 Philip Leone-Ganado (above left) and Malcolm Galea struggle to come to terms with their real identity in The Pride.

The most important lesson and the hardest to learn is to be comfortable with who we are – that is who we really are, rather than who society expects us to be.

In our relentless and often futile struggle for happiness, we often forget that one of the most crucial aspects to achieving this elusive state of being, this ‘happiness’, actually lies within ourselves. Learning to be accepting of the one person we expect the most of – our own self; which we so often are critical of and attempt to repackage and compartmentalise to suit our need to fit into the constraints of ‘normal’ society – is the first and most difficult step to take in our quest for liberation. MADC explored this strong theme in Alexi Kaye Campbell’s The Pride at St James Cavalier last weekend.

Director Michael Mangion, who had to take on the miscellaneous small roles rather at the last minute and portrayed them quite accurately, brought together a formidable cast of actors. These were all so very sensitive to the nuanced characters they were chosen to play, that the production – already relying on a strong script – was guaranteed top-notch performances.

Two parallel sets of characters mirror each other’s lives between 1958 and 2015. Malcolm Galea plays Philip, who is married to Sylvia (Julia Calvert), an illustrator who in 1958 introduces him to her friend and collaborator, children’s author Oliver, played by Philip Leone-Ganado. The scenes set in 1958 alternate between those set in 2015, where another Philip, a photographer (also played by Galea), has just left his journalist boyfriend Oliver (Leone Ganado) for being too promiscuous and unfaithful. Cue best friend Sylvia (Calvert) to continuously minister to Oliver’s lascivious and angst-ridden petulance.

As a quest for self-discovery and acceptance, The Pride works on the fundamental levels of human emotions and sense of identity

While the 1958 characters struggle with the unacceptable – Philip with his ‘unnatural’ and ‘abnormal’ urges and feelings for Oliver, who seems more accepting of his situation – the 2015 characters struggle over their new roles as people still fighting for equal rights and acceptance but also shouldering the responsibility of their relationships in an open and ordinary manner.

Philip from 1958 struggles with his guilt over betraying his wife and his rejection of Oliver, which culminates in a violent confrontation where Oliver admits to being in love with him, to which Philip retaliates by savagely raping him and asking him whether that was what he wanted him to become. 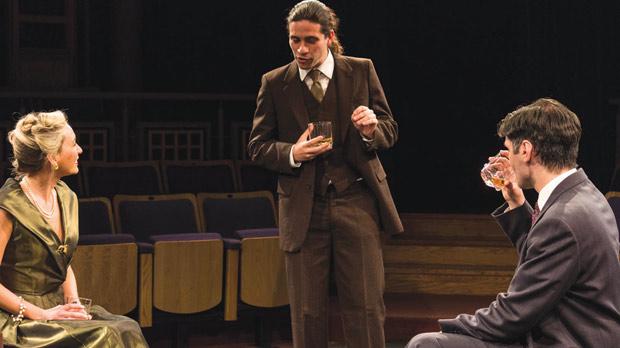 Oliver from 2015, on the other hand, struggles with his impulsively addictive sexual urges and his inability to remain faithful to one man. The situation becomes one where the characters from the 1950s are coping with the taboo and socially perceived abnormality which is part of who they are and is immutable, while the characters from the noughties are dealing with the ups and downs of ordinary relationships. It is still ultimately a struggle for understanding of who one truly is.

Galea gave an incredible interpretation as the 1958 Philip, who fights to repress his internal demons and never ends up accepting himself for who he truly is – much to his dismay and unhappiness. His deception and fear, not only of Philip’s sexual orientation but also of the violent man he could be, coupled with the sense of loss he felt at never acknowledging his true self, were superbly interpreted.

Leone-Ganado’s Oliver was doubly effective in the contrast he created between the 1958 character, which was honest, gentle and quietly confident, and the 2015 character – brash, charmingly obnoxious and over-sexed but still struggling to come to terms, not with his sexuality, but with his insatiable libido, his self-control and his discernment and judgment of character: in this, Leone Ganado excelled.

The two very different Sylvias were a delight to experience. Her subtle changes in tonality – from the quiet, respectful and loving wife and friend in 1958 to the fun loyal and ever patient best friend who doesn’t mince her words – were captivating. Her final speech as the 1958 Sylvia, where she confronts Oliver about his affair with her husband, was done with the right measure of pathos to bring out the dignity and class of a woman who is sensitive enough to have understood and gracious enough to let go for everybody’s sake. It was beautifully and touchingly done.

As a quest for self-discovery and acceptance, The Pride works on the fundamental levels of human emotions and sense of identity and was an excellent performance all round.