At least two more high-rise buildings, including a 44-storey tower, could grace the Paceville skyline in the coming years, Times of Malta has learnt.

The two distinct projects were not flagged in an exercise undertaken by this newspaper last Tuesday that mapped out the towers planned for the St Julian’s-Sliema area.

However, sources in the real estate industry noted the absence of the development planned for the site occupied by the St George’s Park and another site just up from the InterContinental Hotel.

The developers involved in these latest projects, the Testaferrata Group and Paul Xuereb of PX Lettings Ltd, have remained low-key and adopted a cautious approach.

When contacted yesterday, both indicated they were waiting for the planning policy for the area to be out before moving ahead with their plans.

The re-development will include high-rise buildings, with one of the towers going up to at least 44 floors

A spokesman for the Testaferrata Group confirmed plans for the re-development of St George’s Park, which is wholly owned by the company.

“The re-development will include high-rise buildings, with one of the towers going up to at least 44 floors,” the spokesman said.

The site could potentially house three towers but any development would happen in a phased approach, he added.

At 44 floors, the proposed tower would be the tallest in Malta.

“The target is to create a very high-end destination with offices, residences, retail outlets and a hotel but, before proceeding, the company has to know what the planning policy for the area is going to be because this is crucial for the financials of the project,” the spokesman said.

The company also wants to know whether the government will introduce fiscal measures to encourage projects of this size and quality.

He said the company believed that high- quality high-rise structures would benefit the economy.

“It makes sense to group such buildings in an area.”

Concerns have been raised over what appears to be a rush by developers to propose luxury developments and tower blocks aimed at the foreign market.

Most plans include luxury apartments but Mr Xuereb has other thoughts.

He confirmed his intention of building a luxury five-star hotel on at least 29 floors on privately-owned land just up from the InterContinental Hotel.

However, he insisted the plans were still on the drawing board pending the planning authority’s policy review for the area.

“I have not yet submitted a planning application and will not do so until the authority updates its policy for the area,” he said, insisting he was on the starter line waiting for the authority to blow the whistle.

“The land is mine and the plans are to have a five-star tower hotel and some offices but no residential units. The building would cover 30 per cent of the site’s footprint of 3,000 square metres. But until the regulations are updated I am keeping all options open and could still decide to go for a medium rise building instead.”

The Planning Authority initiated a review of policies for the St George’s Bay, Paceville and St Julian’s area last year. A public consultation exercise ended in January and, according to an authority spokesman, the feedback was being evaluated.

These latest two projects, which are still on the drawing board, could be expected to join other developments proposed for the area, including the site currently housing the Institute of Tourism Studies, Villa Rosa and Mercury House.

Although the Corinthia Group is planning a six-star resort in St George’s Bay comprising hotels and residences, the company had said it did not envisage towers.

Other planned high-rise buildings include a residential tower, part of the TownSquare project, in Sliema and a 40-storey hotel at Fort Cambridge, in Tigné.

There are three projects (that were left unmarked in the map produced last Tuesday) for which development permits had been issued and work on them is under way: the United Garage site in Gżira, the residential and business towers on the northwest side of the Midi project in Tigné and the residential towers forming part of Pender Gardens, in St Julian’s.

The Metropolis site in Gżira has permits in hand but the proposed three towers are nothing more than a hole in the ground and have been so for some years.

While proponents of these projects argue that there is a market for all such top-end investments, others have cautioned that an uncoordinated approach could spell disaster.

Chamber of Architects president Chris Mintoff urged developers to beware “the Montebello Syndrome” when writing in the Times of Malta last Wednesday.

His warning was directed at greedy developers who risked overextending themselves with big projects that were not carefully planned. He also called for a holistic vision to determine how these projects would impact communities and infrastructure.

His words followed a call by independent MP Marlene Farrugia who tabled a parliamentary motion seeking a moratorium on large-scale projects and high-rise buildings until a master plan is drawn up.

Prime Minister Joseph Muscat has shot down the idea, insisting development could not be stopped. 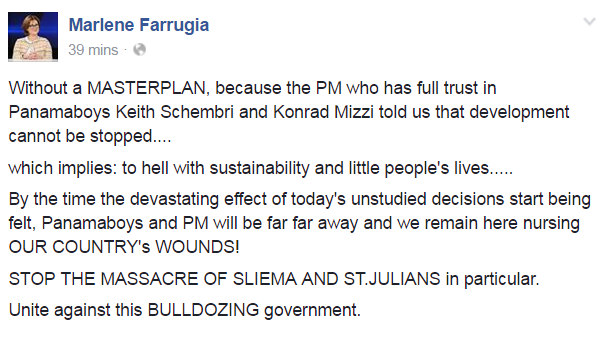 In a Facebook post this morning, independent MP Marlene Farrugia urged the public to unite against the "bulldozing government".

"By the time the devastating effect of today's unstudied decisions start being felt, Panamaboys and PM will be far far away and we remain here nursing our country's wounds," she wrote, pointing out that the massacre of Sliema and St Julian's had to stop.

Dr Farrugia has tabled a motion in Parliament calling for a moratorium on major projects and tall buildings until finalisation of a masterplan which would ensure that public and private land could continue to be enjoyed in a sustainable manner.