Malta has won two awards at the largest tourism trade fair in the world.

This was the 53rd edition of ITB Berlin (Internationale Tourismus-Börse), and Malta was present at this fair with three stands. The main stand was hosted by the MTA and the Ministry of Tourism, with Air Malta and several hotels and incoming travel agents also present. There was a second stand in the culture lounge, and a third in the LGBT area. 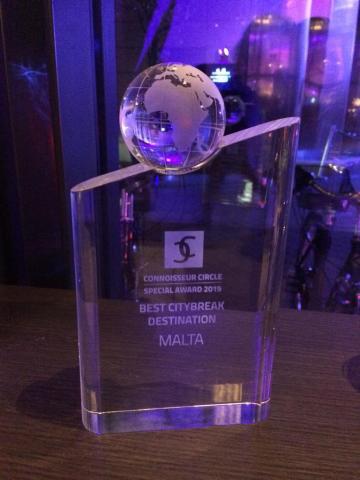 To attract and educate visitors, Liam Cauchi, from tastehistory.org provided samples of the food concept being offered at the Maritime Museum. This concept sees food prepared in the style that the Knights of Malta would have cooked. This wowed all those present as it provided an insight into Maltese gastronomic history.

Valletta won the award of Best City Break-Destination at the seventh edition of the Connoisseur Circle Hospitality Awards. Connoisseur Circle is the number one publication for luxury tourism market in Germany and the gala awards are considered one of the social highlights at the ITB. The winners of the various awards are determined by a jury of 16 independent travel connoisseurs.

Malta was awarded the award for trend destination in 2019 due to its increased popularity in the LGBTIQ community as a holiday destination, as well as its progressive legislation and targeted advertising.

MTA’s executive chairman Gavin Gulia said that in 2018, the German market consolidated its position as the third largest incoming market to Malta, with an increase of 17.6% when compared to arrivals in 2017.