James Cook sits calmly at his desk, with the only sound the clickety clack of his typewriter. As he works, a portrait of a boy takes shape.

From Hollywood star Tom Hanks to the London Eye observation wheel, the artist can turn symbols and letters into art, earning him increasing attention.

Cook, 25, produces his work in a studio in London, surrounded by typewriters and artwork, with the white dome of the O2 arena visible outside.

He began producing typewriter art in 2014 when he was in college studying art and came across an artist from the 1920s who produced similar work. 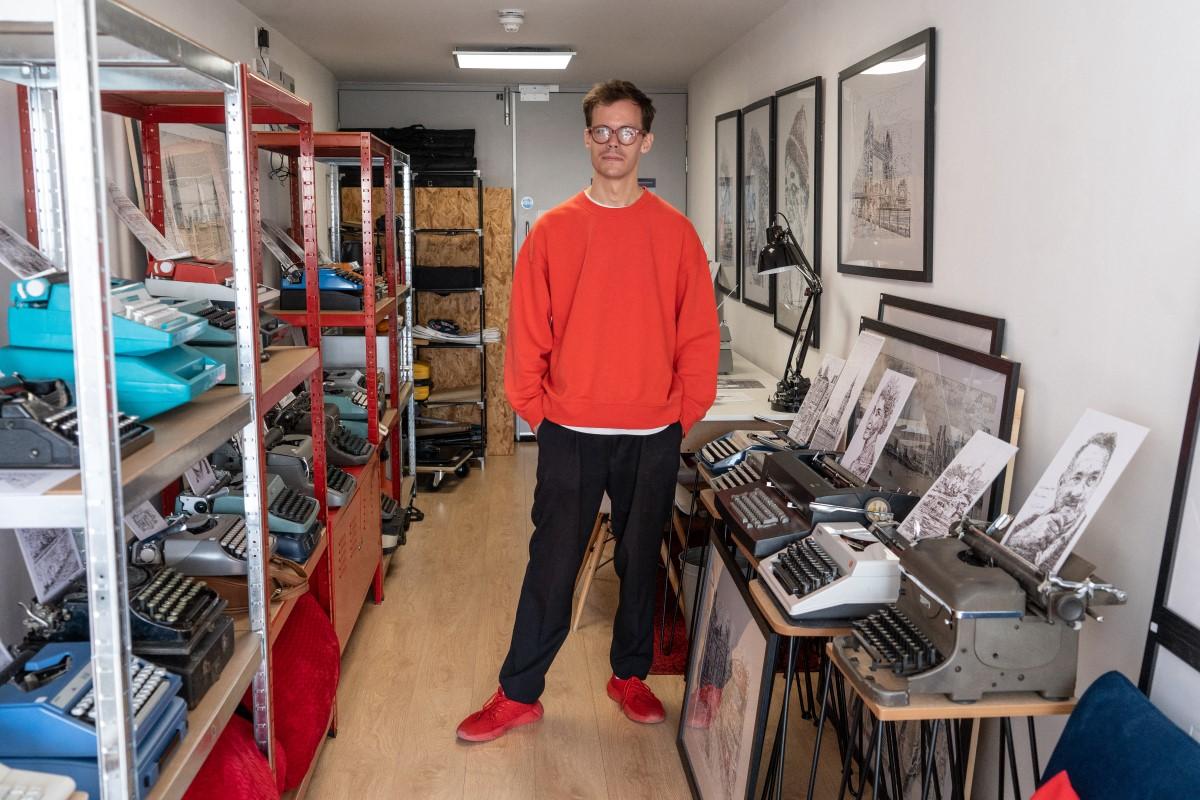 Cook, 25, produces his work in a studio in London, surrounded by some 20 typewriters and artwork.

Initially, he thought the idea was “impossible” – until he tried it himself.

“It was simply out of curiosity that I decided to go out and get my own typewriter,” he told AFP.

“Since 2014, I’ve just been slowly learning how to make drawings.”

Cook first thought depicting buildings would be easier because of the straight lines and the ease of moving from left to right on a typewriter.

“In fact, I probably draw people better on a typewriter than I can draw free hand in pen or pencil.”

For 25-year-old London-based artist James Cook, drawing portraits used to be a struggle. But that all changed when he discovered his now signature tool: the typewriter. Video: James Rybacki/AFPTV/James Cook Artwork/AFP

Cook never set out to make it a career and went to university to study architecture but interest online encouraged him to pursue typewriter art.

People donate typewriters to Cook as he gives the machines a “second life”.

Cook can produce art anywhere, including in the shadow of the London Eye or across the river from the UK parliament, the Palace of Westminster.

As the sun shines bright in a clear blue sky, he delicately produces his images using the “@” symbol, numbers and letters including “W” and “P”.

For a portrait, he uses the bracket symbol to recreate the curvature of the eyes’ pupils or to illustrate the skin’s complexion he will use the “@” symbol because “it has a large surface area”. 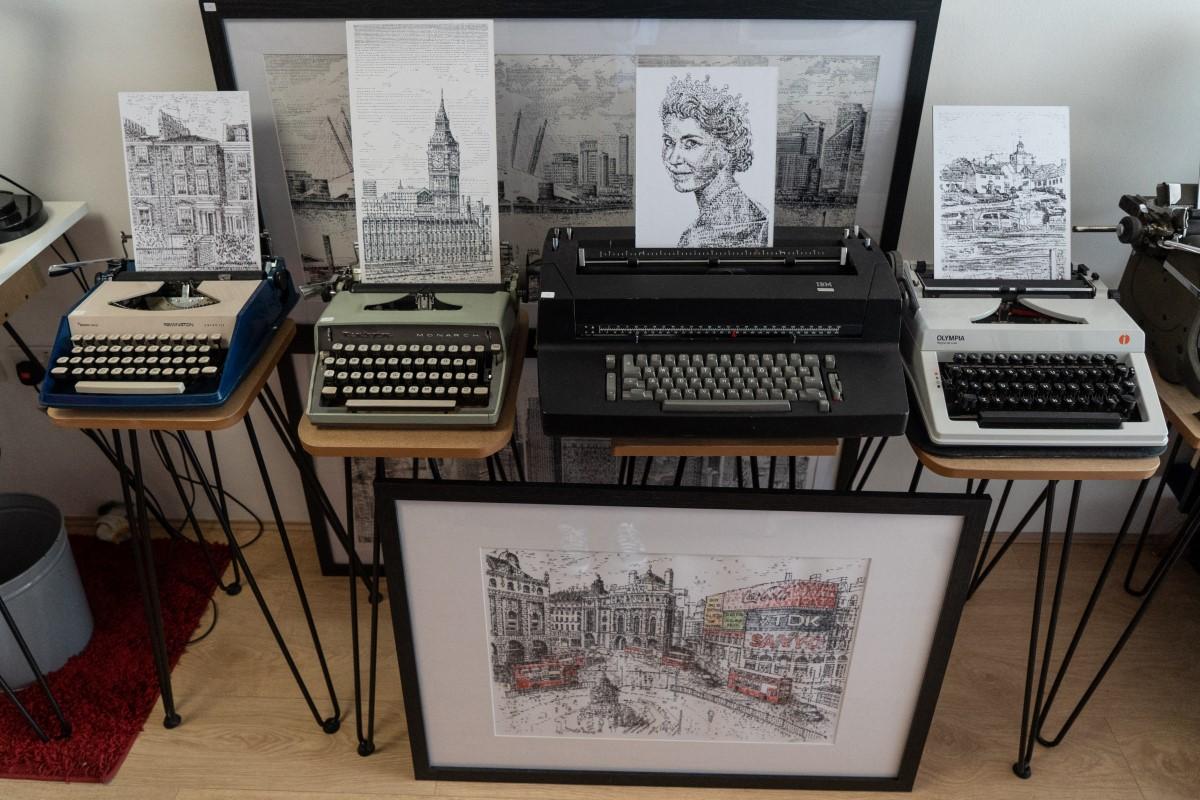 “Before the invention of Microsoft Word and the rest of it, this is what we used to type letters with,” said David Asante, who works as an IT engineer at a hospital.

“For him to be able to turn it into a work of art, it’s amazing.”

Cook says it was “really satisfying” to use a “limited” medium.

Smaller drawings can take up to four to five days but portraits can take longer.

Panoramic drawings – pieced together at the end – can take between two weeks to a month.

He will host an exhibition from July until August where people can make their own typewriter art, and see his work including the signed portrait of Hanks. 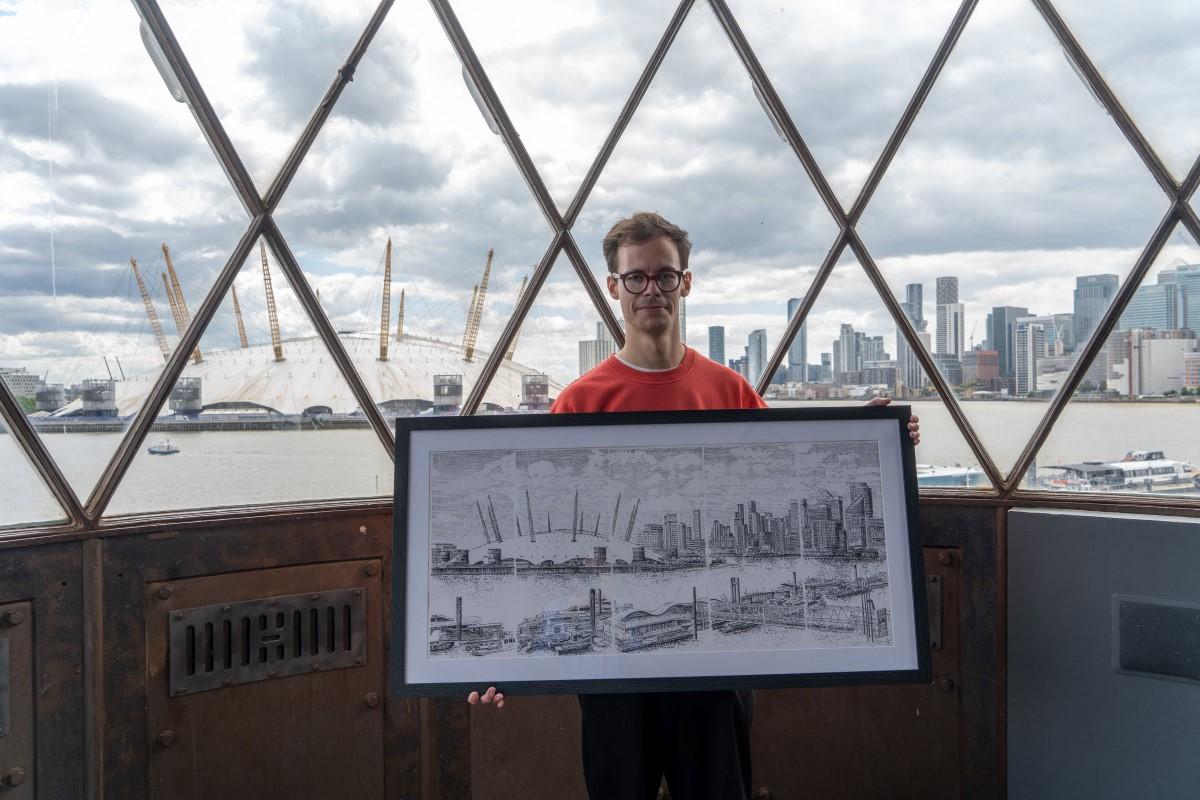 Cook with the white dome of the O2 arena visible outside.

He also hopes to set a Guinness World Record for the largest typewriter drawing.

But while it appears seamless to the viewer, Cook says it “never gets any easier”.