Rainer Maria Rilke, in one of his Letters to a Young Poet, wrote that “nothing touches a work of art so little as words of criticism: they always result in more or less fortunate misunderstandings. Things aren’t all so tangible and sayable as people would usually have us believe; most experiences are unsayable, they happen in a space that no word has ever entered…” 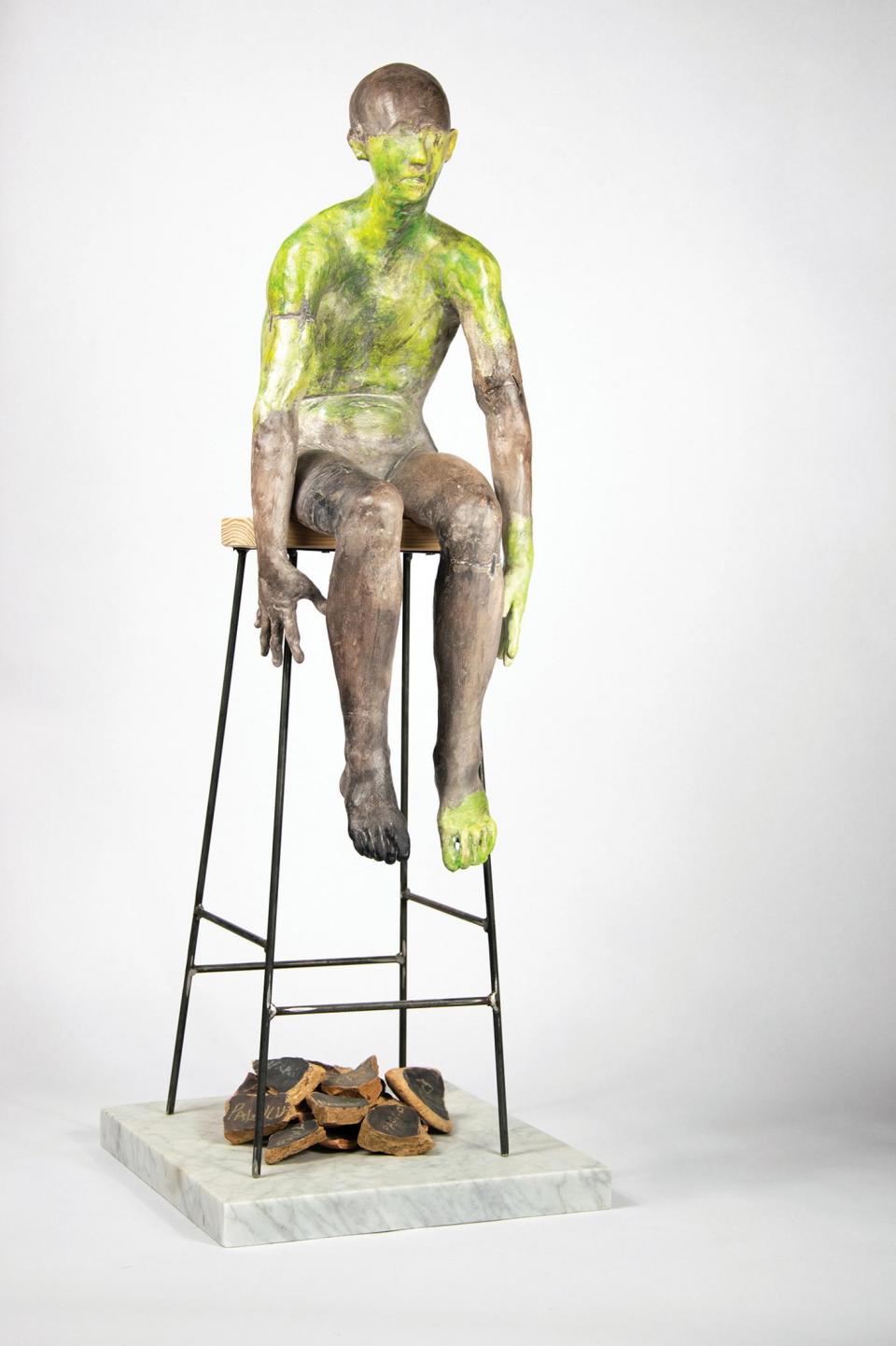 Gathered amid the artworks of the exhibition Darkness at Noon, finding increasingly that words are failing us, Rilke’s assertion on the unsayable had a poignant presence upon its recollection by Charles Balzan, one of the three artists exhibiting.

It is fitting that the curatorial note introducing this exhibition begins by pointing out a pervasive contradiction. It considers how, while we are part of nature, we are simultaneously distanced and distinct from it, resulting in a disjuncture between our primal, animal selves and our civilised, rational and calculated semblances.

The artworks in this exhibition pay homage to this theme, characterised by the metaphor of ‘darkness at noon’, in turn a metaphor for the uncanny, which describes the state of disconnection we feel from our more primal selves. They are also an expression of our inability to disavow our primal selves.

Darkness at Noon is an unveiling of this disjuncture. It is an expression of the human form – the human form laid bare amid the deteriorating interior of The Splendid in Valletta.

Gabriel Zammit, who curated the exhibition along with Joe-Philippe Abela, said that it was only natural to explore this theme with the artists Charles Balzan, Gabriel Buttigieg and Paul Scerri.

“The exhibition came about through the initiative of Joe-Philippe, the other co-curator, who has known all three artists for a very long time, so he had the idea to bring them together since all their works explore a very similar theme. I was invited to join in to give it a concept. We realised that the common element between the artists is that they explore a kind of subterranean reality of human experience. 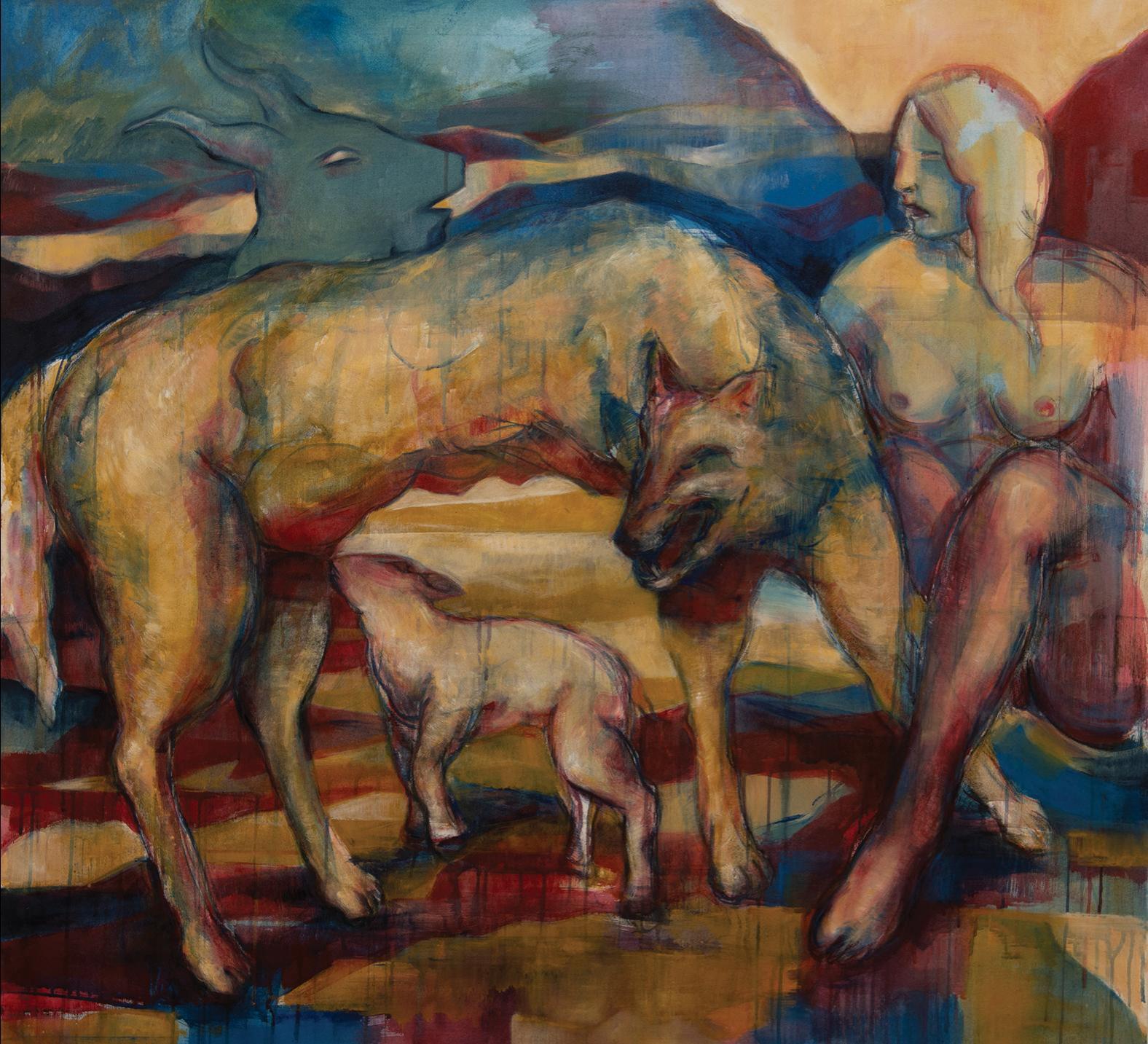 After Eliran Kantor, Goya and Diana (and Acteon) (2020), Gabriel Buttigieg

“Joe-Philippe and I did some research around the theme of the uncanny. We came up with this metaphor of ‘darkness at noon’ together with Giulia Privitelli and Clive Zammit, who contributed essays to the exhibition’s catalogue. We then gave this concept to the artists and they each gave it their own take and created a collection for this exhibition,” said Zammit.

Abela, responding to the question of how he expects viewers to experience this exhibition, said that they should do so “by removing their conscious mind (since the conscious mind intends to be critical) and look at the artworks through their feelings and with their subconscious. One should never look for answers when looking at art; instead one should always look for questions and let the answers come naturally.”

Each artist tackled the uncanny idiosyncratically, instigating different questions within the viewer. Buttigieg, tackling this topic from a psychological perspective, said his take “was to base the uncanny on the primal side of humanity but also on man’s relationship with the animal”. 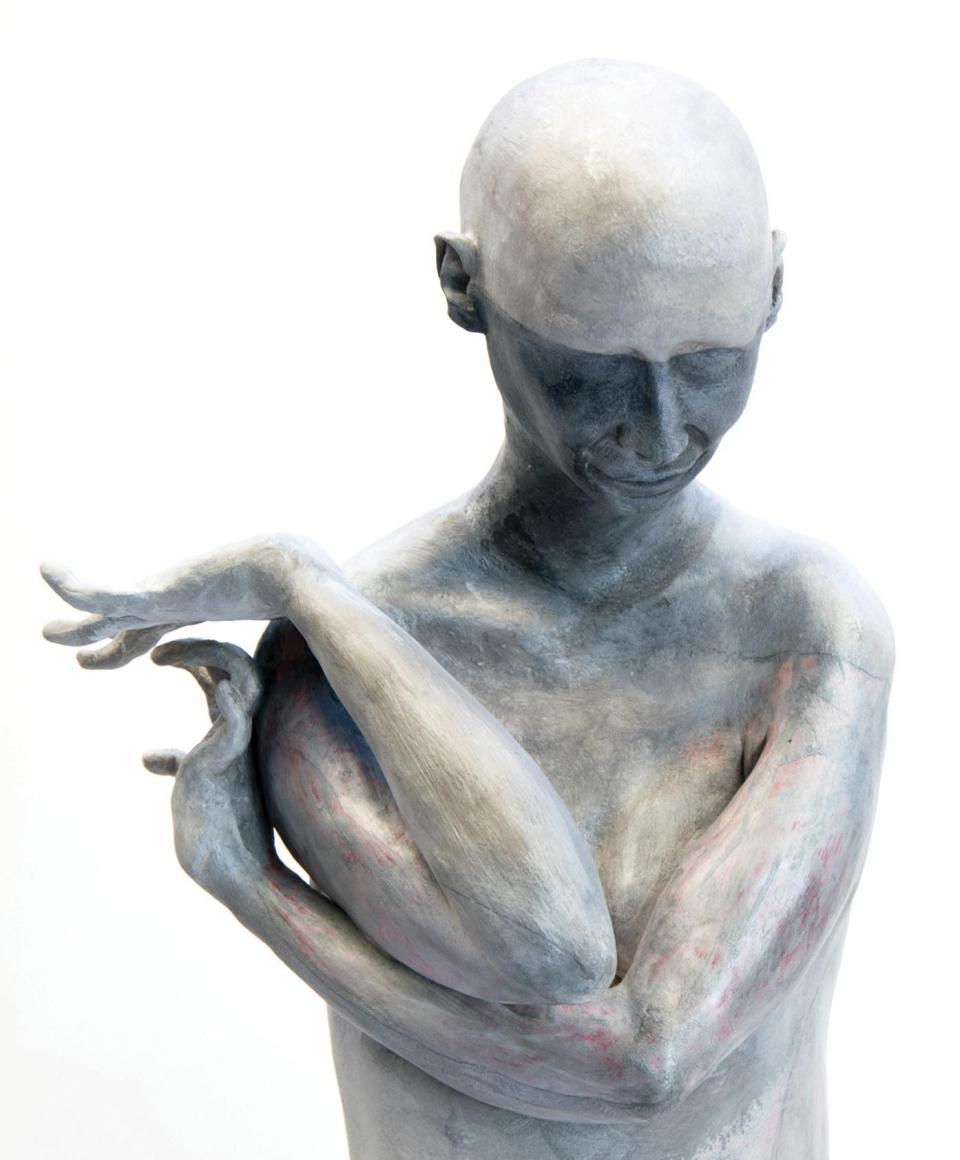 “The painting After Eliran Kantor, Goya and Diana (and Acteon) is the symbol for all my work here. In it, the wolf is neglectfully and uncomfortably feeding the lamb… The symbol of the goat will come up very often in these paintings because, psycho-dynamically, it is the symbol of the instinct,” he explained.

Buttigieg’s human forms appear to dissolve into one another. Purposefully conglomerate, they sometimes evaporate. We are seeing an imprint of a past moment, perhaps so long in the past as to be primordial.

The juxtaposition and interrelation of human and animal in his paintings makes them somewhat like contemporary renditions of primitive artworks, much like those made by the “proto-humans” dwelled upon by Clive Zammit in his catalogue essay.

One should never look for answers when looking at art

Balzan’s take on the uncanny involves a process wherein he attempts to document the stripping of the many layers and veneers that compose the everyday self until his subject achieves a state close to primordial. A kind of chiaroscuro, the figures in his photographs emerge out of darkness.

“I had started doing a project which culminated in a book called Not Alone where basically I got by close family and tried to see them through my anxious vision. Some images would come out occasionally that I wouldn’t relate to, such as when once I took a photo of my daughter in which she appeared ghostly, like a spirit.

“So, to tackle this anxiety, I started highlighting more of this element within them – the mortal element, the element that everything is transitory… That was how I started documenting anxiety. 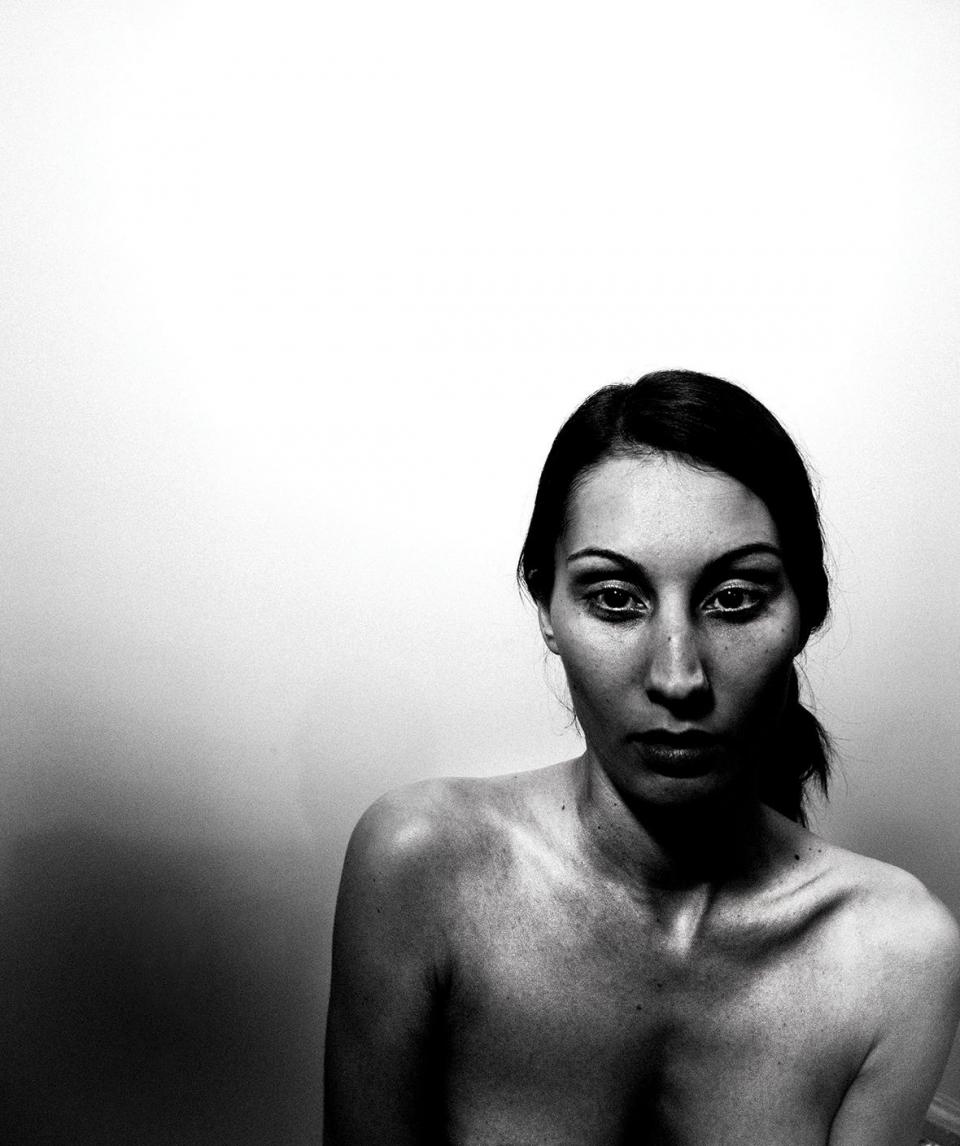 Balzan took inspiration from George Bataille’s essay The Mouth for this series of artworks. He interprets this as saying that human beings have lost their primal side, but that this can nevertheless still manifest in traumatic situations.

“We revert to that state when something is overwhelming us. Hence the contorted bodies of the exhibit – they’re trying to achieve that state,” he said.

Balzan’s photographs and video installation are the result of a process of divestment, but this is not enough to expunge anxiety.

“Some of the images of the family are really high up, so they’re there but you can’t really approach them, like a long-distant memory which pops up but which you try to avoid so as not to cause anxiety,” said Balzan.

Scerri’s ceramic sculptures are the most socially grounded of the works at Darkness at Noon. His take on the uncanny is one that centres on certain present human failings, with themes such as hubris and the fall of those who shout the loudest. 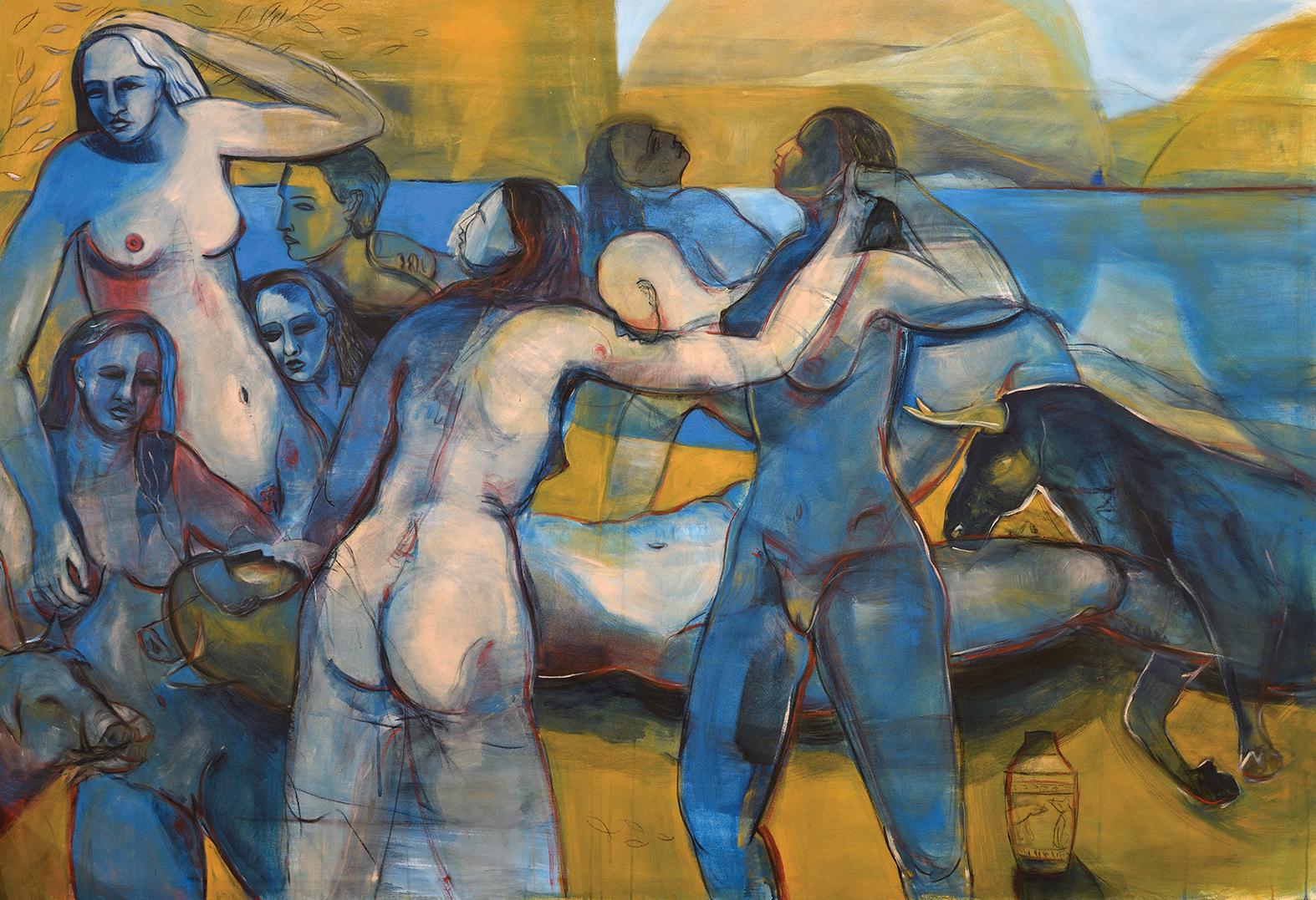 Circe and her Nymphs (2020), Gabriel Buttigieg

“My work is relatively narrative. If one looks at the works I had done in the past, there always are some subtle messages, as though you have a puzzle, and I let the audience try to decipher what I’m trying to convey. I don’t believe that one should need to explain their work. Audiences are intelligent enough to make their own conclusions. The work emerges from the soul; I don’t need to elaborate.

“This time I worked a lot on my own person… Now I have reached a different phase of life. I always say people have four phases: childhood, adolescence, adulthood and then you reach the phase where you’re given a pension and where others unfortunately start to see you as a liability. You become emarginated.

“Hence the sculpture called Ostracised. The word itself came from the Greeks who would grab fragments of pottery, carve on them the name of the person they wanted to exile and ostracise him. The names there are all versions of my own name.

“We are living in a society where, unfortunately, being prudent gets you penalised. In traffic at a stop sign, if you aren’t arrogant and make your way through, you stay put. We are living in this type of society. I am very bothered by who is presumptuous…” said Scerri.

One can interpret Scerri’s figures as semi-dismembered: “The works are all fractured and put together again, representing a personal trauma I once had. That hurt has always helped me to be creative.”

In contrast to both Buttigieg’s and Balzan’s works, which are more shadowy and obscured, Scerri’s are in full view, with nowhere to hide. Being sculptures, his works invite tactility. While two-dimensional works sometimes promote distance between them and the viewer, Scerri’s works almost draw us to extend a hand to them, maybe touch their faces. Scerri said that this is inherent to all sculptures.

All the artworks in Darkness at Noon have in common not only the human form, but also its alteration, even its deformation. In G.H. Luquet’s L’art primitif, alteration is defined as involving a succession of changes, each destroying the previous state, whereas deformation involves transformation into something else. This is part of the works’ challenging character and what allows viewers to contend with them.

“What we hope to do with this exhibition is challenge people”, said Zammit. “The uncanny, as a psychological mechanism, turns you inward. When that which is supposed to be familiar suddenly becomes strange, that forces a rethinking of the way in which you experience your own internal reality.

“I hope it instigates people into asking themselves ‘how do I think about myself’, ‘why do certain things make me feel comfortable or uncomfortable’. I just hope that this exhibition turns people on themselves,” he concluded.

Darkness at Noon can be viewed at The Splendid, Valletta, until February 24 and will be open between Monday and Sunday from 10am to 6pm. The project was sponsored by the Malta Arts Council Project Support Grant and supported by The Splendid, ILab Photo and Studio7.