An article co-authored by the university’s Dean of the Faculty for Social Wellbeing Andrew Azzopardi has been removed from a journal on the basis of plagiarism.

Saviour Formosa, associate professor in the Department of Criminology, within the same faculty, who claims his papers have been plagiarised, said in a private Facebook group post that it was a “sad day for Maltese scholarship”.

Formosa said he had asked Azzopardi to resign from his post as Dean.

While acknowledging that the work failed to meet academic standards, Azzopardi rejected any allegations that this was the result of any wilful misdoing and hoped that his colleague’s criticism was not an attempt to silence his activism.

Azzopardi and Formosa have previously clashed on the prisons issue, with the dean repeatedly calling for serious reform in the wake of a number of suicides.

Formosa described as “utterly condemnable” the fact that the authors of the article, Risk and Protective Factors in Violent Youth Crime, include Azzopardi, who is not only an academic but also the Dean of the Faculty of Social Wellbeing. 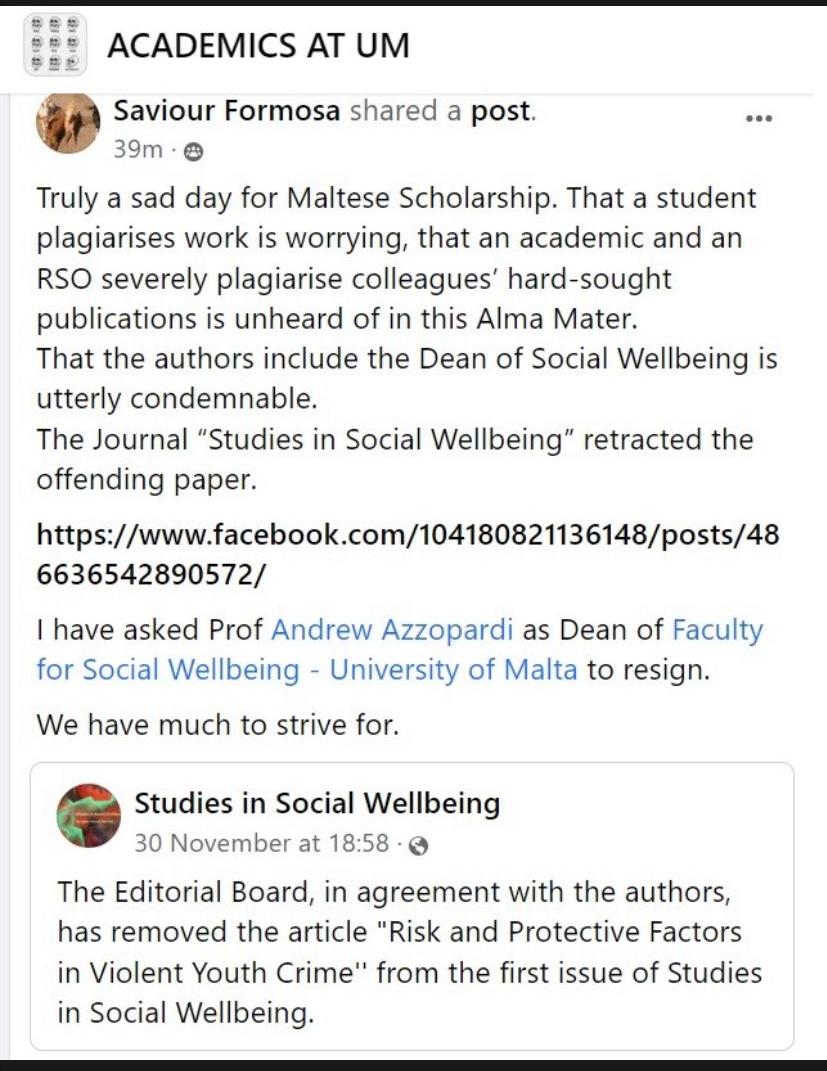 Research Support Officer Andrew Camilleri was the first author of the report and Azzopardi was the second.

“That a student plagiarises work is worrying, but that an academic and an RSO severely plagiarise colleagues’ hard-sought publications is unheard of at this alma mater,” Formosa charged.

The article was published in the faculty’s Studies in Social Wellbeing journal in September, when the editorial board was notified of the complaint and was retracted on Wednesday.

In another post, the editorial board, in agreement with the authors, said it has removed the article from the first issue of the academic publication.

Editor in chief, Prof. Maureen Cole, declined to comment further and confirm why the article was removed, though it is understood that it did not meet the journal’s required standards.

She also refrained from answering whether the editorial board’s role was to check for plagiarism, with software tools available to do so and to confirm whether it was rare that academic papers were retracted from journals.

'Not of the standard befitting academia'

Sources said a part of the article in question had plagiarized papers, written jointly and uniquely, by Formosa and Prof. Janet Formosa Pace from the Department of Youth within the same faculty.

Other sources, however, said it was more a case of “sloppy editing” and “poor paraphrasing” rather than plagiarism.

When contacted, Azzopardi acknowledged the “mistake”, saying the work presented to the journal was “not of the standard befitting academia”.

“Consequently, the main author and I have worked hand-in-hand with the editorial board of the journal and went above and beyond what was requested from us as authors and decided to retract the article in question of our own accord.”

While agreeing that the paper could have benefitted from further review, he rejected any allegations that this was the product of any wilful misdoing, as the editorial board itself noted. “If this is an attempt at silencing me I want to assure everyone that I will keep responding with vigour to the current social issues, whether it’s about prisons, activism or other social issues I believe need to be represented in our society.”

The University of Malta’s rector Alfred Vella said he was alerted to the matter on Wednesday and was “in the process of establishing the facts before coming to any decision”.

According to the University’s own guidelines for students, plagiarism is defined as “the unacknowledged use, as one’s own, of work of another person, whether or not such work has been published”.

Minor instances are treated as “academic incompetence”, which generally occur in the first year of undergraduate studies.