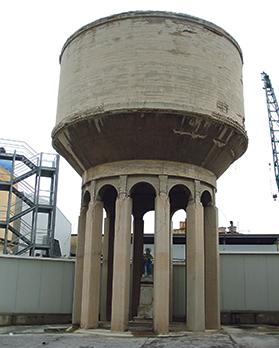 The concrete water reservoir at the Civil Abattoir in Marsa.

A 1930s concrete water reservoir at the Civil Abattoir (Il-Biċċerija) in Marsa has the potential to become a new type of industrial heritage, according to university lecturer Ruben Paul Borg.

Around 10 years ago, the building was set to be demolished – a move contested by Dr Borg and his team, who advocated for the building to be restored as part of the island’s industrial heritage.

The reservoir is made up of 12 columns, supporting a ring beam with a domed base and a conical structure as the base for the upper drum.

A memorandum of understanding was signed between the University of Malta, the Ministry of Sustainable Development and the Land Department in 2016 which supported the restoration of the reservoir.

The building also presents the opportunity to understand how concrete performs over time, providing insight into how dur-able and resilient built structures can be.

“The idea is to continue monitoring the performance of the structure in time and use it as a test case to address a major concern today, namely pressing issues in the deterioration of infrastructure and buildings,” Dr Borg told the Times of Malta.

Cement production alone contributes to over five per cent of man-made carbon dioxide. But Dr Borg insists that Malta should not run from concrete, emphasising that cement production and the construction boom can become environmentally sustainable.

Concrete’s negative impact on the environment is compounded when it is used as a binder for the production of cement.

“Given the increasing need for concrete in society as a material which we can hardly do without, any measures which can mitigate the impact on the environment can prove greatly beneficial,” Dr Borg said.

Waste materials can be used as an alternative to cement in the production of durable concrete.

Pulverised fuel ash, an industrial by-product of coal power stations, can provide a partial substitute for concrete and help reduce waste in construction.

New national standards that encourage recycling-oriented de-construction and demolition are being set up through the Malta Consumer and Competition Affairs Authority (MCCAA).

“These standards will serve as important guidelines for the industry to reduce waste where possible and to encourage reuse and recycling practices,” concluded Dr Borg.