This year the University of Malta celebrates its 250th anniversary as a State university and the centenary of the enrolment of its first two female undergraduate students. 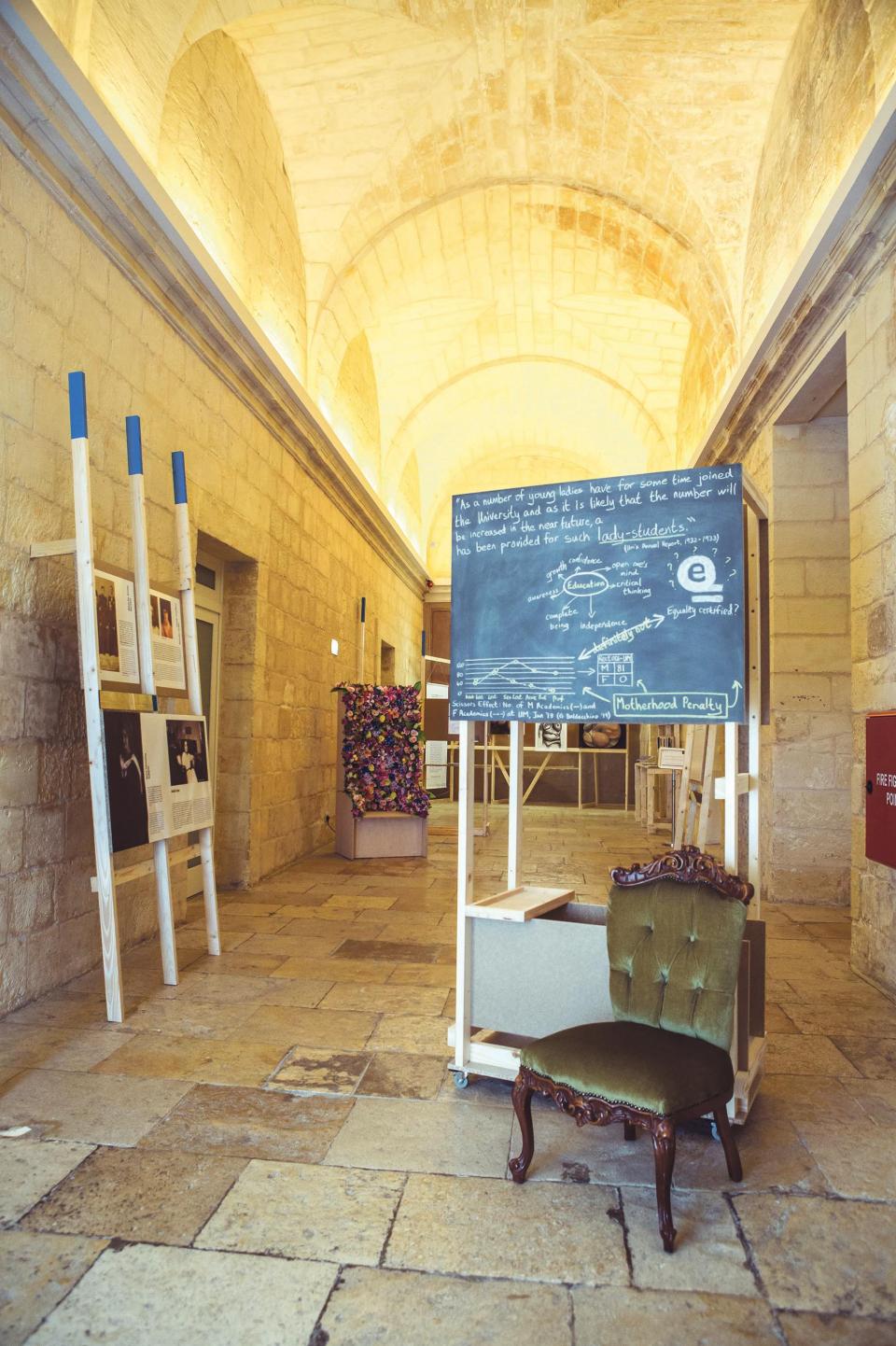 The Lady’s Chair by Kristina Borg (right) and information relating to some of the first women who attended the University of Malta (left).

Lucia Levanzin Inglott was possibly the first Maltese woman to attend a course, gaining a diploma in midwifery from the University in 1918.

Irene Condachi enrolled as a medical student in 1916 but abandoned her studies after one year, going on to study in Naples and graduating a doctor in 1926.

It highlights milestones in the history of women studying at the University and statistics on gender disparities at the institution, and nationally.

It also displays photos and information submitted by female alumni of the University, recounting their experiences.

The exhibition is curated by Raphael Vella and designed by Tom Malderen.

The exhibition is open until November 29 at the University of Malta’s Valletta campus. 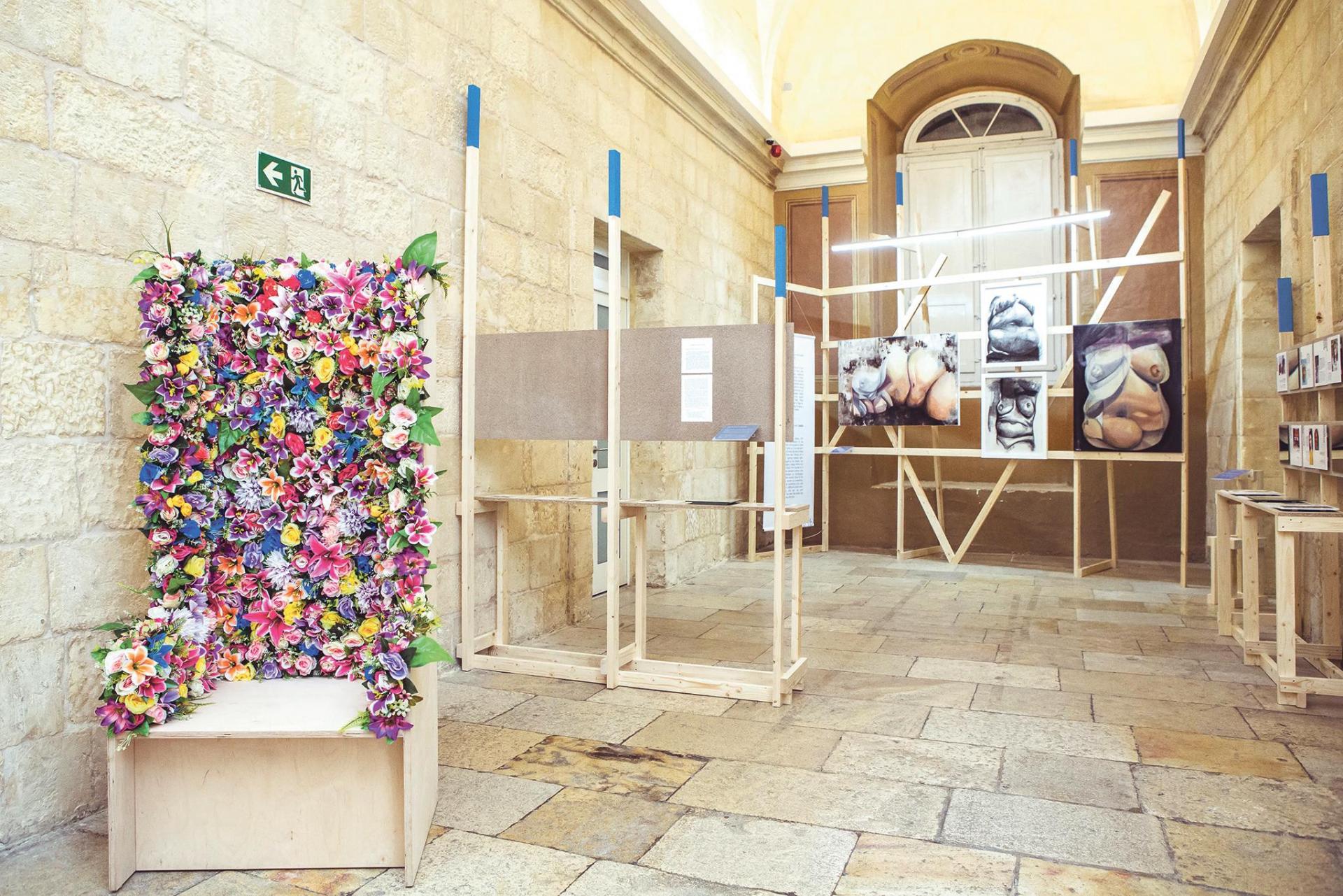 Hors Concours installation view, showing (right) Veritas by Amber Fenech and (left) This Far But No Further by Margerita Pulè.

“In this exhibition I developed the theme of the robust female nudes both conceptually and artistically.

Most of the time I work with chalk and charcoal, which I use for preliminary sketches before painting in oils. For this exhibition I used both mediums – which allowed me to study at close proximity the heavy folds of these robust bodies.

My message through this work was that in the modern world women are expected to look a certain way to be accepted by society. However, no human being is flawless and beauty comes in all shapes and sizes.

I focused on women’s aesthetic side, not on successful women.”

“Gender difference has nothing to do with cognitive ability. The difference lies in societal attitudes.

My video installation, Alma Mater: 100 Years, 100 Women, challenges and examines these cultural norms. Through conversations with women, I gathered their experiences of entering or trying to enter various fields of higher education in Malta, such as arts, humanities, sciences, business, law, mathematics, engineering….”

“My performance, in collaboration with six other women, focuses on gender stereotypes, gender gaps and gender segregation. It acknowledges that over the past 100 years, education has been more accessible to girls and women. But it also highlights the gaps still present, namely that there are fewer women in high-ranking jobs and positions – leading to a gender pay gap and consequently to a gender pension gap.

The work analyses the various factors leading to this situation, and identifies certain patterns. For instance, key trends in subject choices and content in Middle School can easily lead to gender segregation in higher education.

The predominant factor for the gender gap remains the motherhood penalty, where society places specific expectations on the female partner, different to those on men.

Having said that, I didn’t want my work to be gender-biased, focusing solely on the female figure. In fact, the performance also highlighted society’s expectations of men as the breadwinners, leaders, people who can do it all.

We cannot speak of female empowerment if we do not also acknowledge the needs and gaps of other gender identities.

The performance is a result of thorough research carried out during the summer months, including interviews with academics, primary and secondary school educators, career advisers and other professionals.

Performance art was a fitting medium to share and portray this research while remaining authentic to the interviewees’ day-to-day experiences. The performance took place during the exhibition opening and it was not announced. We wanted to take the guests by surprise and present an ‘impromptu’ beginning.

Throughout the piece, the work also had interactive and participatory elements that invited the audience to become performers themselves, making them partake in different day-to-day scenarios recalling 1919, reflecting on our present day in 2019, and envisioning a possible utopian or dystopian future in 2119.

I would describe my work as ironic but critical and, as one guest said after the performance, “funny but direct”.”

“The exhibition brings together historical, current and fictional elements. I wanted to show the development of gender equality among university students beginning in 1919 but link the past with women’s present experiences.

This is why several early 20th century black and white photographs are balanced with contemporary pictures sent in by the public, which was amplified by the contribution of four artists.

The women’s narratives bring to light the challenges they face as they multitask in their daily lives. At the same time, I avoided the heroic discourse associated with masculinist histories so the women are presented as regular people with very regular lifestyles.”

“I work mostly in political art, so usually there is a socio-political point to my practice. In this work, I took a piece of writing by Maria Caruana – one of the first women to write for L-Għaqda tal-Malti – Università’s publication, Leħen il-Malti.

I had the text – called Qawmien għall-Ħajja – amended so that the protagonist is a woman rather than a man, and the man’s spiritual awakening in the text now belongs to a woman.

The voice reading the text is a very deep male voice, so that the freedom temporarily afforded to a woman is swiftly rescinded, as now a man narrates her story – hence the title of the work This Far But No Further.

The structure of the piece – the chair – is given a plastic-flower interior, referring to the well-intentioned support female students can be given at University, but which does not always continue in the real world, where boys’ clubs and male chauvinism still very much exist.

My work doesn’t celebrate women in higher education. Rather, This Far But No Further picks a hole in the idea of claiming to have achieved equality between genders – this ideal of parity and equality for all, is still a long way away.

In Malta, we celebrate the fact that women have reached high business, academic and political positions, but the reality is that women face prejudice daily in all areas of life.” 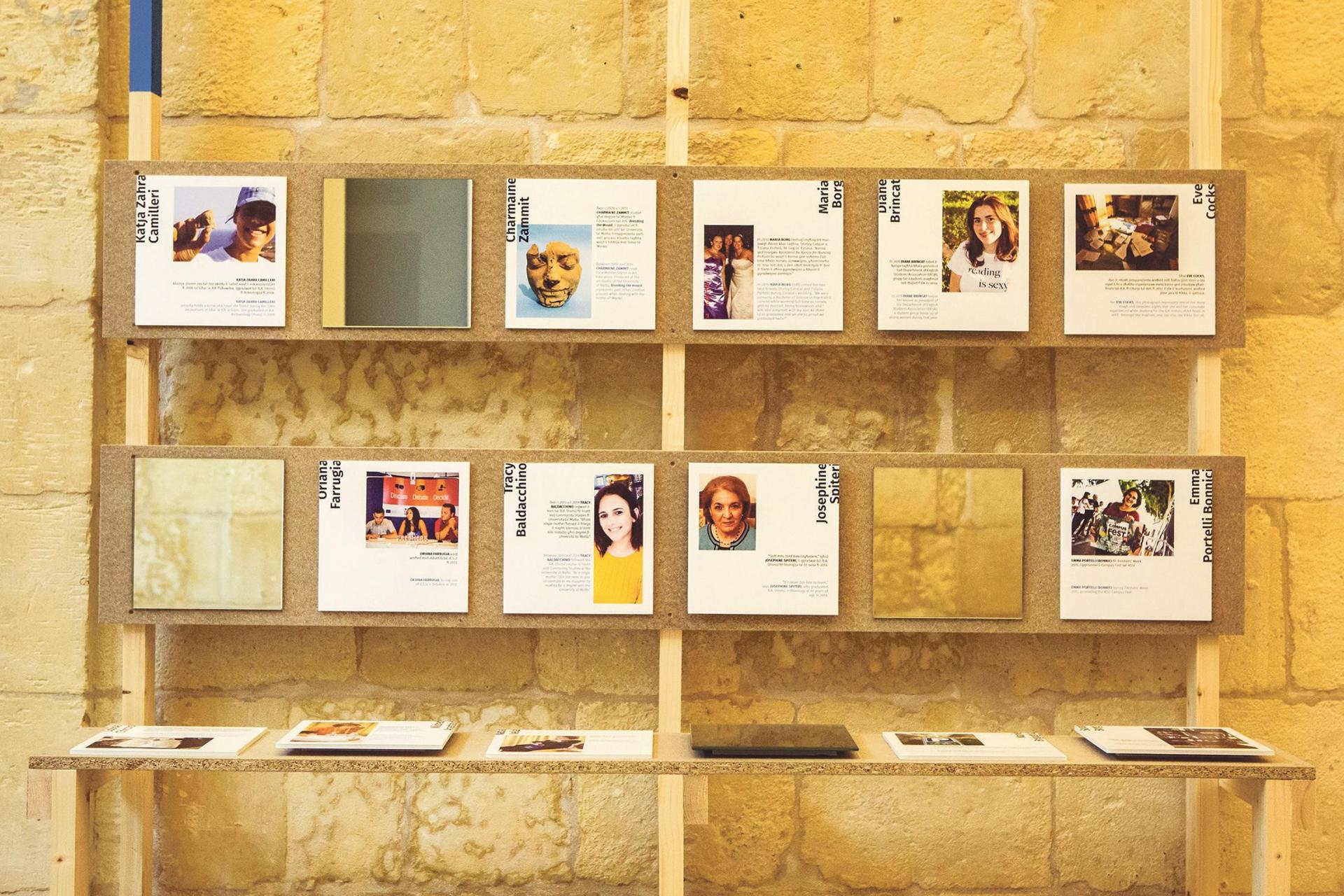 Images sent by women, describing their experience and subsequent works.

Designer Tom Malderen – all for lightness and playfulness

“Exhibition design is all about creating messages in space. To construct a three-dimensional environment that tells the curator’s story, I rely on a range of elements, but on this occasion the context and mode of construction were dominant to bring the scenography together.

Instead of using traditional panels I chose to introduce as little material as possible and allow the historic fabric of the tall, long university corridor to become an intrinsic player.

Exhibition structures carefully lean against the walls and are fragmented to bring the building in. Vice versa, mounting Amber Fenech’s painting on a space-frame makes the depicted bodies reach out in the building.

After deciding to construct the structures ourselves and relying mostly on timber, I went on to design with both repetition and small variations in mind. In doing so, I created a strong unity while illustrating relationships between elements and made the content different enough to increase the audience’s focus and understanding.

Last but not least, I wanted the exhibition to retain a lightness and playfulness by introducing additional details: mirrors reflect the context and make visitors part of the exhibited material; touches of blue paint challenge our colour stereotypes and hint at the blue rooftop lights used during Santa Marija feasts; the Sansevieria trifasciata plant on top of the welcoming panel is more commonly known as the ‘women’s tongues’.”