The University of Malta is planning to send a 250 gram device into space in a project being held with the University of Birmingham, the Malta Amateur Radio League (MARL), and the Italian Astrodynamics company, GAUSS Srl.

The 5x5x5 cm device, referred to as a PocketQube pico-satellite, will be launched in 2018 into a sun-synchronous low earth orbit (LEO) and will be used to validate on-board equipment that will study the properties of an ionised region of the Earth’s upper atmosphere (known as the ionosphere). 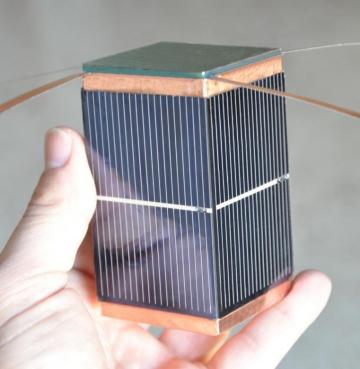 Reducing the size and weight of satellites is a recent trend aimed at minimizing the cost of launching objects into space, which aside from the fixed costs, can reach upwards of €10,000 per kilogram in some situations.

The collaboration has brought together two Maltese post graduate engineering students – Darren Cachia in Malta and Jonathan Camilleri, a Ph.D. student at the University of Birmingham – who have joined efforts and are developing the satellite platform and the scientific payload respectively.

“The challenge is to design a reliable space-grade device using low-cost commercial off the shelf components, such as the ones found in modern smart phones. Special software and hardware techniques are being developed to overlap the strengths and weaknesses of individual components, and improve the reliability of computation in the harsh radiation-filled environment of space. This relatively recent development brings space technology within the reach of University students and opens the door for civilian space research,” said Mr Cachia, whose project was awarded an Endeavour Scholarship and is part-financed by the European Union – European Social Fund (ESF).

This project will pave the way for a swarm of eight such satellites that will spread over a large geographical area and hence gain better coverage of changeable ionospheric conditions which affect radio communications.

The mission is expected to last about 18 months and will relay information back to Earth that will be accessible to anyone owning a simple ham radio set. Information will be made available in due course to allow schools and interested individuals to participate using inexpensive equipment.

The multi-year pico-satellite research initiative led by Dr Ing. Marc Anthony Azzopardi and Dr Ing. Andrew Sammut is the flagship of the Astrionics Research group (ASTREA) of the University of Malta’s Department of Electronic Systems Engineering (ESE) which will leverage a €1 Million European ERDF investment in advanced prototyping equipment to develop, manufacture and test the satellite platform.

The payload development is led by Prof. Matthew Angling who runs the Space Environment and Radio Engineering (SERENE) group at the University of Birmingham. The launch is likely to be provided by Gauss Team Srl. in Italy, who typically launch from the Baikonur cosmodrome in Kazakhstan.