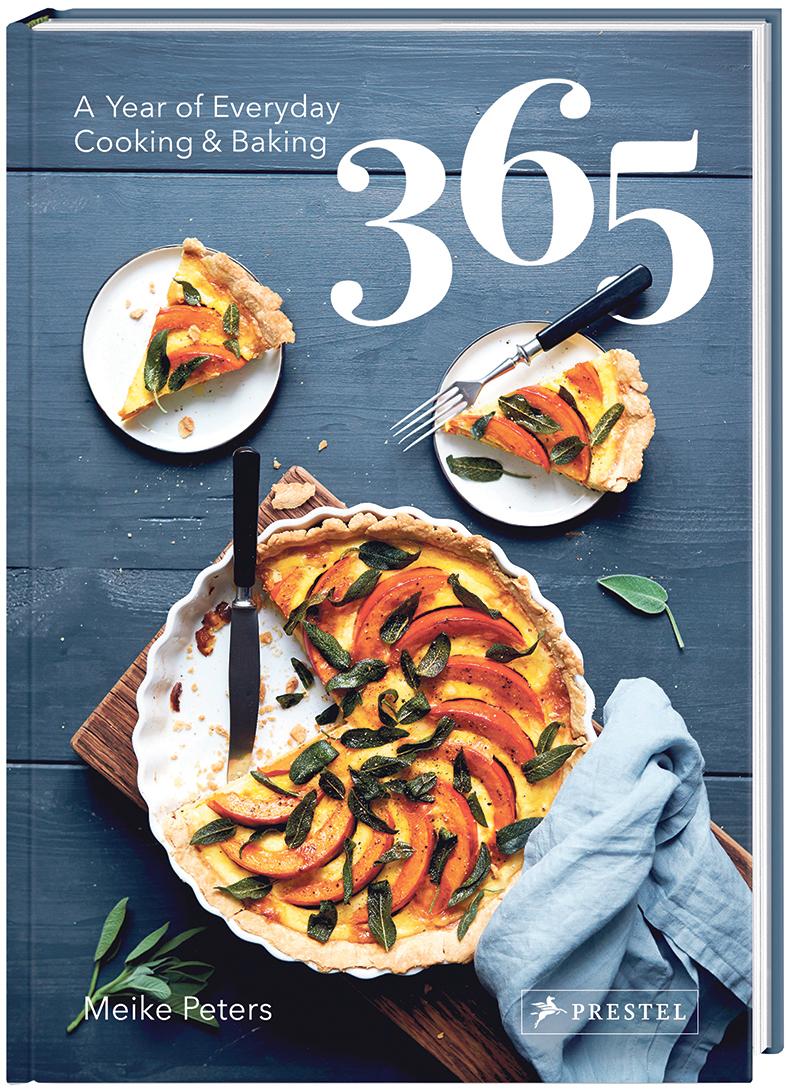 When I was asked to review Meike Peters’s new cookery book, 365 – A Year of Everyday Cooking and Baking, I baulked somewhat and almost asked someone else to do it. The world’s best cook, I certainly am not. But then I remembered that, after all, this is exactly the purpose behind a good recipe book, helping people excel in an area where typically, maybe, one isn’t that good. I re-thought my initial scepticism. Hey, after all I’ve been trying to improve my talents in that department for quite a while. And Peters’s book is simply gorgeous, replete with stunning photography and intriguing recipes that make you dream about turning yourself into a Nigella Lawson overnight.

It also comes with a very thorough index at the back, for those who – like me – operate very much on the basis of daily whims when it comes to preparing the day’s mealplan. If you wake up jonesing for a good, old-fashioned carbonara, or maybe a beef stew, all you need to do is look it up in the index and there you go: you’re directed to the relevant recipes. No muss, no fuss.

Thus, my top reasons for loving this book: to begin with, there will never be a single day when you’re at a loss what to eat. Ever. It’s called 365 for a reason – the book offers a recipe for every single day of the year. We kick off January 1 with an appropriately chaste and low-calorie, albeit tasty, winter Caprese and we move all the way through the produce of the seasons until we end December in massive style with a Limoncello Panna Cotta and a Tuscan Truffle Carbonara.

As Peters herself writes in the foreward to the book, there is one dreaded question likely to cause more strife than the unexpected appearance of the in-laws on the doorstep – “what shall we cook tonight?” No suggestion is every clever or exciting enough, and the critics rarely come up with a better alternative themselves. Cue, World War III and goodbye to any hopes of a serene evening of Netflix ’n’ Chill. 365 – A Year of Everyday Cooking and Baking puts a definitive end to all these squabbles. If it’s good enough for the woman whose earlier book beat The Barefoot Contessa for the James Beard Award, then it’s good enough for this household, thank you very much.

Another big advantage to this collection is that you won’t be made to hunt for silly ingredients that cost an arm and a leg. You know the sort I mean – those recipes that call for a punnel of strawberries in mid-December? Or those that expect you to source fresh peaches in January? Well, this isn’t that sort of book. All the recipes follow the natural order of the seasons, which is why they’re conveniently divided by month, and further sub-divided by week. There’s eggplant, marrows and spinach in January; purple potatoes and beans in February; cherry tomatoes, tzatziki and yellow bell peppers in June; artichoke, prawns and fish in July; ricotta, squash and casseroles in November... you get the gist! A quick trip to the local store will probably sort you out with all the ingredients and you won’t break the bank in the process.

It also helps that the recipes are idiot-proof, at least judging by the handful that I have tried my hand at. Don’t you hate it when you are seduced by a most beautifully-designed cookery book – and you end up spending a lovely afternoon poring over the oh-so-perfect photos, only to realise that there is no way in hell you’re going to manage to reproduce this perfection in your own, more humdrum kitchen? Welcome to my world. So I have to confess that, while I thoroughly enjoyed poring over this gorgeous book I was a bit less enthused about actually trying out stuff.

Fast-forward to a couple of pep talks in front of the mirror and I took the plunge. For starters (see what I did there?) I had a good look at Peters’s foreward, where she offers some super-practical advice, down to which kind of pots and pans to use, cleaning seafood, and guidelines about quantities. With the practicalities out of the way, it was time to choose a couple of debut recipes.

Because I’m a sucker for a good plate of pasta, I opted for January’s Spinach Gnocchi with Mushrooms and Bacon. Pasta, but with a bit of a homemade difference. This was my first time making gnocchi from scratch, but it worked out, mostly because the recipe takes a step-by-step approach which makes it difficult to get wrong.

Next, because I’m a pig and I can’t get enough limoncello in my life, I opted for the afore-mentioned Limoncello Panna Cotta, combining together two of my favourite things in life. I’d never tried my hand at making this dessert before, so the apprehension was doubled. The end result did not look as amazing as Peters’s and was definitely more wobbly. But it still tasted ace, so no complaints. 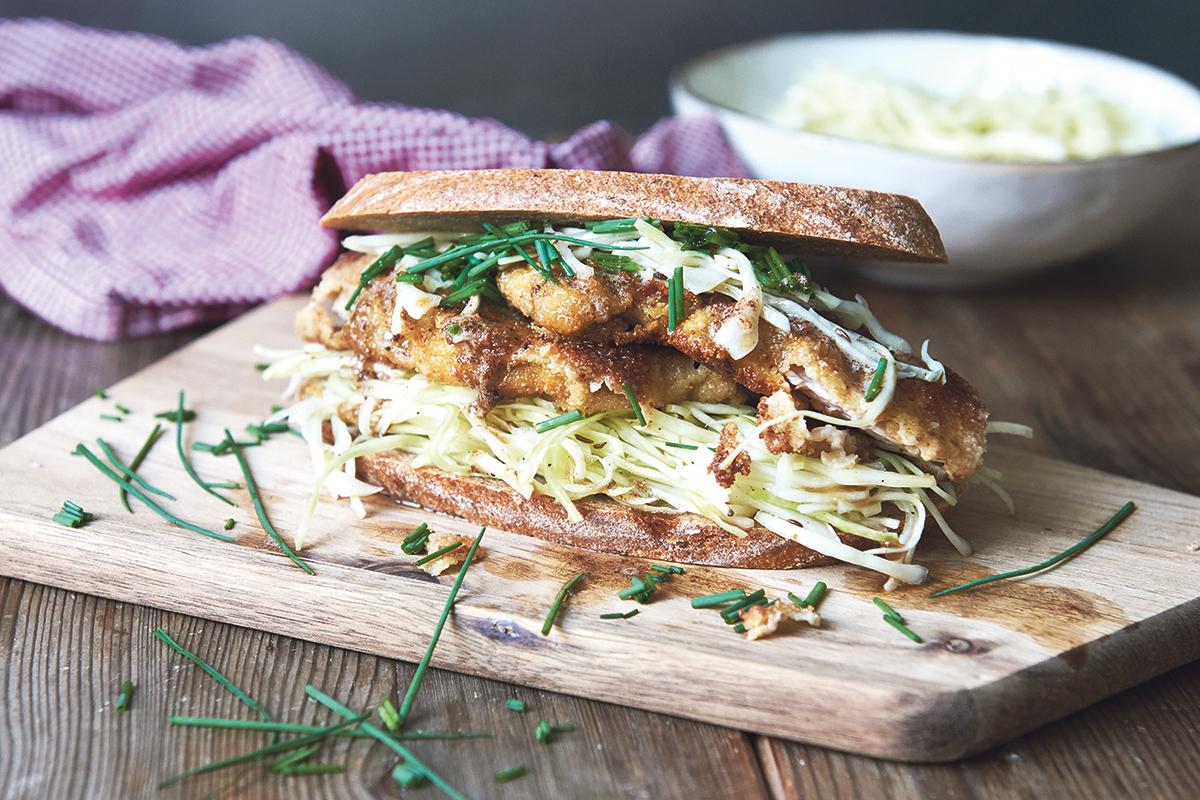 For the salad, in a medium bowl, sprinkle ¼ teaspoon of salt over the cabbage and rub it in with your fingers for about one minute. Let it sit for 10 minutes to soften the cabbage. Add the olive oil, vinegar, and caraway seeds, mix until combined, and season to taste with salt and pepper; set aside.

For the schnitzel, on a work surface, arrange the pork between two sheets of plastic wrap. Use a meat pounder or your fist to tenderize and slightly flatten the meat.

Place the flour, egg, and breadcrumbs in 3 separate deep, wide plates.
In a large, heavy pan, heat two tablespoons of butter and a generous splash of olive oil over high heat. Season the meat on both sides with salt and pepper. Lightly dredge the meat in the flour then dip it in the egg and dredge it in the breadcrumbs, making sure it’s evenly covered. Immediately place the meat in the hot pan.

Reduce the heat to medium-high and cook, turning once, for about 1½ minutes per side or until golden brown and just cooked through. Set the pan aside and cut the schnitzel in half.

For the sandwiches, drizzle the cooking juices from the pan over two slices of bread. Spread a few tablespoons of the cabbage salad on the bread and arrange the schnitzel on top. Sprinkle with chives and place a slice of bread on top of each sandwich then squeeze and enjoy.