The acceptance of the resignation was announced this morning at a press conference attended by Mgr Cremona himself.

Mgr Cavalli said the Archbishop had resigned for health reasons. He has acquired the title of Archbishop Emeritus of Malta.

The Nuncio said the Pope had thanked the Archbishop and praised him for his human warmth and spiritual closeness to the people.

Mgr Cremona said he wrote to the Pope some weeks ago because his health had deteriorated. He urged the faithful to pray for him and to the Church and said it was an honour for him to have led the Church in Malta for almost eight years.

He said that two years ago he had succumbed to exhaustion. He went to Gozo to rest and the first inkling of what he should do came at that time.

"I did my best to fulfil all obligations but it was with an effort.

"The time is now ripe for somebody else to take over the leadership of the church.

I am at peace with the Lord and with my conscience." Mgr Cremona said.

The Archbishop said he felt no rancour over the controversy raised in the media in August when questions over his leadership were raised.

He said he had met those who made the comments and had a frank discussion.

Maybe they hastened the process, he said,  but the comments were not the main reason for his resignation.

Mgr Cremona said the saddest period of his episcopate was the introduction of divorce, which Malta now had to live with.

Auxiliary Bishop Charles Scicluna thanked the Archbishop for being a shining example to the people, a shepherd who was close to the people of God. He thanked him for his courage and for the joy he brought to may people and said he looked forward to the Church continuing to benefit from his wisdom.

Mgr Cremona said he looked forward to returning to his convent but would always be ready to help his successor.

The Apostolic Nuncio said the resignation comes into force at Noon today and the process for his succession could take some five months. Archbishop Cremona over the coming days and weeks will still preside over some confirmations and other ceremonies.

Mgr Scicluna will be Administrator of the Church.

Prime Minister Joseph Muscat said in a statement that he had learnt of Mgr Cremona's resignation with regret.

He said Mgr Cremona's leadership had a positive impact on the Church. His humility and the simple way how he explained things drew many people behind him. His contributions were backed by high intellectual value which made people reflect.

Mgr Cremona had seen the Church intervene in important public debates while staying away from partisan politics. He augured that his successor would follow his footsteps in order to promote national unity.

Dr Busuttil praised Mgr Cremona for his honesty and integrity. He said he had taken a courageous decision and it was admirable how he had chosen to step down once he decided he could not fully carry out his duties.

The Labour Party in a statement thanked Archbishop Cremona and praised him for his sincerity and humility as well as his calm demeanour in difficult times, saying he had drawn the admiration of many.

It may be early to speculate on who will replace Archbishop Cremona but one thing is certain: the decision will be taken by the Vatican.

A consultation exercise does take place but Canon Law makes it clear that the definitive judgement rests with the Apostolic See.

But it will not be a blind choice. Canon Law lays down that at least every three years, the conference of bishops should come together and “in secret” draw up a list of priests, including monks, who are more suitable for the episcopate.

They are to send the list to the Vatican but every bishop also has an individual right to put forward the names of clerics whom he considers worthy. Apart from these names, the Apostolic Nuncio will also make his own findings by consulting people within and outside the Church hierarchy.

This process may take its time, which means that the Pope may accept Mgr Cremona’s resignation without making an immediate appointment.

Although Auxiliary Bishop Charles Scicluna is considered by many as being the lead candidate to become archbishop – especially after his transfer from Rome to Malta two years ago – Vatican expert Frank Zammit cautions against rash conclusions. In the Church it is often the case that those deemed to be likely successors will be nudged out of the race, Mr Zammit argued.

“Although the two obvious options are Mgr Scicluna and Gozo Bishop Mario Grech, there is nothing that says the Pope will not opt for somebody else, like had been the case with Mgr Cremona,” he said.

Canon Law states that to be ordained a bishop, the individual would have to be at least 35 years old, ordained a priest for at least five years, of good reputation and must show “solid faith, good morals, piety, zeal for souls, wisdom, prudence and human virtues”. 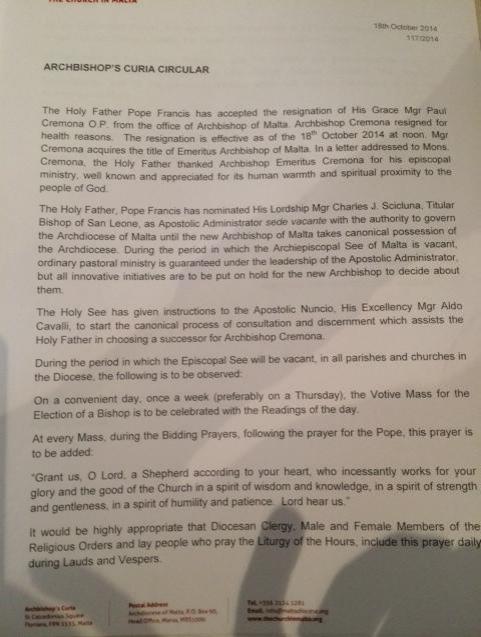