Those clamouring for change and seeking the “crucifixion” of the Archbishop want the Church to pull closer to the Nationalist Party, according to Prof Victor Axiak, former head of the Church’s environment commission. 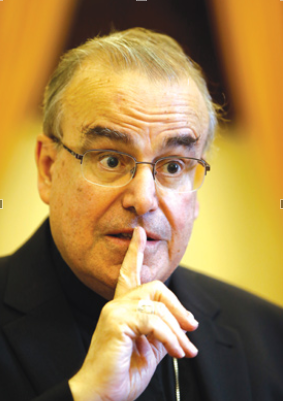 “The Church… will not be rendered vibrant and kicking if it resumes its ‘local mission’ of religio et patria [the PN’s historic slogan], and of allowing itself to be pulled one way or the other to the tune of some political group,” he said.

Reacting to the debate sparked by Fr Joe Borg on Sunday about the Church’s leadership crisis, Prof. Axiak said: “Over the past few years we have witnessed the crucifixion of Paul Cremona because he was not ready to play such a dirty game.”

Fr Borg had compared the current “leadership crisis” in the Church to the state the PN was in after losing the 1976 election, when then leader George Borg Olivier, accused by critics of procrastinating on decisions, refused to leave. However, theologian Fr Renè Camilleri, who was appointed by Mgr Cremona at the start of his tenure to head the secretariat for catechesis, said the unrest within Church circles had long been coming.

He told Times of Malta yesterday that a report proposing reforms to the Curia was shelved after it was handed to the Archbishop last year.

The priest had formed part of a three-member commission tasked by Mgr Cremona to propose reforms to the Curia’s management structure.

Fr Camilleri said although the final document was presented last year none of the reforms was implemented or even discussed. This was just one example of the inertia that has gripped the Maltese Church, he added.

“I live with the Archbishop and we respect each other, but we cannot remain in denial anymore over the widespread unrest among the clergy. The feeling that there is a leadership vacuum is widespread and very real,” Fr Renè said.

The last time the Curia passed through a significant management overhaul was in the 1980s and although Mgr Cremona had appointed new people to certain posts many of the same faces remained unchanged, he said.

The lack of leadership was also felt during the divorce referendum and was allowed to persist in the debate that followed on in-vitro fertilisation and more recently the introduction of civil unions for same-sex couples, he added.

“The Church’s internal structures that are supposed to serve as a platform where such issues are debated are not functioning as they should,” Fr Renè said.

He pointed out that a second report in which he was involved, commissioned to study the situation of the clergy, was also not implemented.

“The work included a psychological study and although it was discussed and accepted certain policies that were proposed are not being respected, which is leading to a lot of frustration among priests,” Fr Renè said.

Parish priests were left to fend for themselves when faced with pastoral dilemmas such as how to deal with cohabiting individuals while the Curia lacked enforcement on how parishes spent money.

“There are some parish priests who spend thousands on the feast but fail to budget money to improve catechism sessions for children,” Fr Renè added.

A number of priests who spoke to this newspaper on condition of anonymity this week expressed frustration at the lack of direction from Church leaders.

When contacted yesterday, Auxiliary Bishop Charles Scicluna said he had no comment to make.

A similar reply was forthcoming from Fr Gordon Refalo, who heads the College of Parish Priests.

“I spoke to all the members of the council of parish priests and we all agree that we have no comment to make,” Fr Gordon said.