Updated - Adds PN's reaction - The European Commission is expecting the Maltese economy to continue to grow “robustly” in the coming two years according to the latest economic forecasts published in Brussels this morning.

The forecast, published twice a year, says that economic expansion is expected to be driven by domestic demand, in particular strong household consumption and a number of large scale investment projects.

At the same time, inflationary pressures are expected to gradually return, but overall inflation is forecast to be contained on the back of the reduction of utility tariffs.

The commission said real GDP growth is forecast to moderate slightly but to remain robust, reaching 2.3 per cent this year and 2.1 per cent next year mainly thanks to domestic demand. It was 2.4 per cent last year.

The deficit, which this year was lowered to 2.8 per cent is expected to fall further to 2.5 per cent by the end of 2014.

No change is forecast in unemployment levels while employment growth is expected to fall to 2.1 per cent from 3.1 per cent in 2013.

Debt is also expected to fall from 73 per cent to 72.5 per cent this year.

The commission said risks to this macroeconomic scenario were mainly related to investment outlook. It said a number of additional investment projects were under discussion and their realisation could provide a further boost to economic growth.

“At the same time, delays in the planned construction of the new power plant poses a downside risk to their growth projections.”

See report on pdf below. 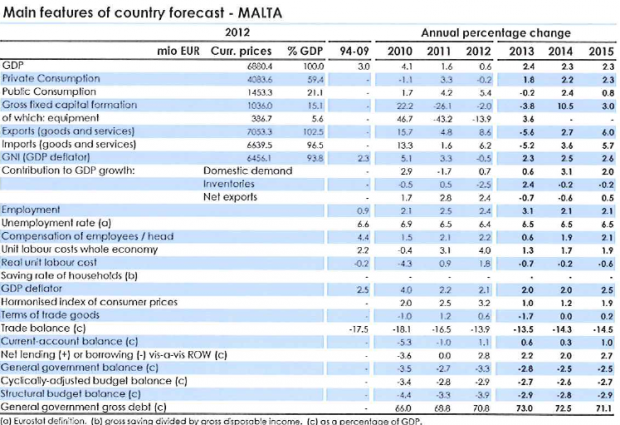 In an interview on One Radio, Dr Muscat said the forecast did not come as a surprise to him and “was confirming something we already know”. He said this was further evidence that the government was creating jobs and economic growth, narrowing the deficit and leaving more money in people’s pockets.

The European Commission, he noted, had looked favourably at the reduction in energy tariffs and the projected increase in salaries. Had it also taken into account the stability in fuel and gas prices, the results would have been even better, he said.

He said he had no figures yet but said he was satisfied with the progress so far, saying even the European Commission acknowledged that the citizenship sale scheme will help the economy.

Dr Muscat also announced that Martin Schultz, the European Socialists’ candidate for the presidency of the European Commission would be in Malta later this week. Described as a friend of Malta and his personal friend, Dr Muscat said he was the “best option” for Europe and for Malta.

PN; WARNINGS MUST BE HEEDED

In a reaction, the Nationalist Party said it would be a mistake by the government to ignore the warnings which the commission had made in the report.

While the rhythm of the economy was stable, the commission had warned of a slowdown in job creation over this year.

While unemployment was expected to maintain the current level, the rate of job creation was expected to drop from the current 3.1% to 2.1%. Not enough jobs would be created to meet demand, and the 8,000 currently unemployed would find it more difficult to find a job.

The PN also observed that the government had increased its spending, because of the people the government itself had engaged, at the taxpayers’ expense.

It was worth noting that the commission was basing its growth forecast on higher domestic demand, yet Eurostat had reported a drop in retail sales in five of the six months to January 2014 while progress was registered in other EU countries, the PN said.