The spring hunting referendum is a war and not just a battle according to hunters federation president Joe Perici Calascione, who said hunters were ready for the campaign fight.

He was speaking to Times of Malta at the official launch of the pro spring hunting lobby's campaign, Iva (yes) this morning.

Mr Perici Calascione said research conducted ahead of the campaign announcement had indicated that while lobbying for an abstention may have resulted in a victory for the hunters, it was not clear.

The decision, he said, was also informed by the precedent such a referendum could set.

He argued that abolishing spring hunting could result in other minorities being targeted later, an argument shot down by former judge Giovanni Bonello.

Although both political parties have said they did not want to politicise the hunting issue, the campaign launch was attended by Labour MPs Joe Sammut and Anthony Agius Decelis. It was also brimming with Labour Party youth activists, and a handful of local councillors.

True to Mr Perici Calascione's sentiments, the battle drums were sounded as the campaign exhibited a level of organisation that resembles an electoral campaign run by a major party.

Asked if winning the electoral war would lead to unruly behaviour by hunters, Mr Perici Calascione said the opposite was true.

"If we win, we will have to be on our best behaviour," he said.

FKNK lawyer Kathleen Grima said the hunting lobby was urging people to vote yes, as they believed the Maltese would not allow such an "undemocratic referendum".

The hunting lobby will plant an indigenous tree every day until the election on April 11. 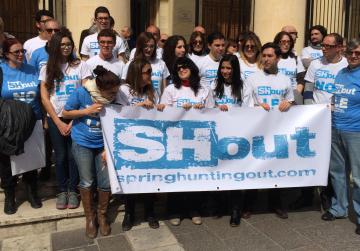 In a reaction, the anti spring hunting lobby SHout (spring hunting out), challenged the hunters’ federation top brass to a debate outside the law courts.

Campaign spokesman Mark Sultana, said that if the election was a war, the battle ground would have to be the debating podium and the media.

He questioned why the hunting lobby was refusing to speak to the independent media, and said this was not conducive to helping the electorate make an informed decision.