The Trump administration will announce a decision within days to cancel funding for a UN agency that supports Palestinian refugees, several people familiar with the decision said on Friday.

The administration pledged $60 million to the United Nations Relief and Works Agency (UNRWA) in January but withheld another $65 million pending a review. That remaining $65 million now will be canceled, the sources said.

The withdrawal of the US funding will be a blow to an agency that currently supports more than 5 million people in Jordan, Lebanon, Syria and the West Bank and Gaza.

The move, which comes a week after Washington cut more than $200 million in US aid to the Palestinians, is likely to heighten tensions between the Palestinian leadership and the Trump administration.

Senior members of the Trump administration have been overtly critical of UNRWA, including national security adviser John Bolton. The Palestinian leadership has angered the White House by boycotting its peace efforts since President Donald Trump recognized Jerusalem as Israel’s capital and moved the embassy there in a reversal of decades of US policy.

"We have no announcements on UNRWA funding at this time," a State Department spokeswoman told Reuters.

Earlier on Friday, German Foreign Minister Heiko Maas said Germany would increase its contributions to UNRWA because the funding crisis was fueling uncertainty. "The loss of this organization could unleash an uncontrollable chain reaction," Maas said.

UNRWA has faced a cash crisis since the United States, long its biggest donor, slashed funding earlier this year, saying the agency needed to make unspecified reforms and calling on the Palestinians to renew peace talks with Israel.

The agency was founded in 1949 after the first Arab-Israeli war in the wake of the exodus of about 700,000 refugees who fled or were driven out of Israel on its founding as a state.

The decision to keep back some money is likely to compound the difficulty of reviving Israeli-Palestinian peace talks and further undermine Arabs' faith that the United States can act as an impartial arbitrator. 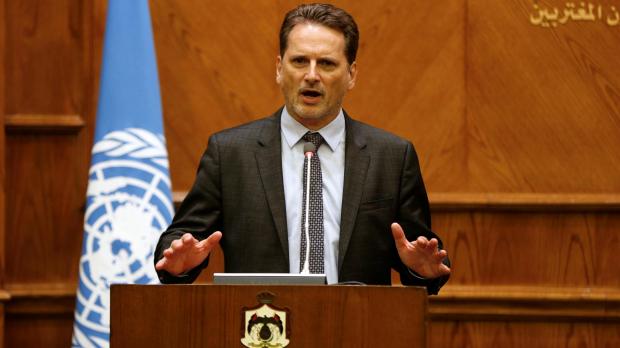 The last talks collapsed in 2014, partly because of Israel's opposition to an attempted unity pact between the Fatah and Hamas Palestinian factions and to Israeli settlement building on occupied land that Palestinians seek for a state, among other factors.

The Washington Post reported on Thursday that the administration also will call for a sharp reduction in the number of Palestinians recognized as refugees.

US Ambassador to the United Nations Nikki Haley on Tuesday appeared to question the world body’s count of Palestinian refugees.

"We will be a donor if it (UNRWA) reforms what it does ... if they actually change the number of refugees to an accurate account, we will look back at partnering them," Haley told the Foundation for Defense of Democracies think tank.

She also said the "right of return" to Israel, claimed by the Palestinian as part of any eventual peace settlement, should be "off the table."