A Phoenician stone sarcophagus excavated last year at Għajn Klieb, on the outskirts of Rabat, is one of the major attractions at an exhibition which has just been inaugurated at the National Museum of Archaeology in Valletta.

The exhibition brings to light the results of months of painstaking studies by a multidisciplinary team researching the sarcophagus and two other tombs discovered in the area, as well as their contents.

The three tombs, although inherently different, shed light on the burial rituals of the earliest Phoenicians on the island, Heritage Malta said.

Sarcophagi are coffins made of stone or terracotta and are exceptionally rare finds in Maltese archaeology, so much so that the previous discovery happened some 300 years ago. 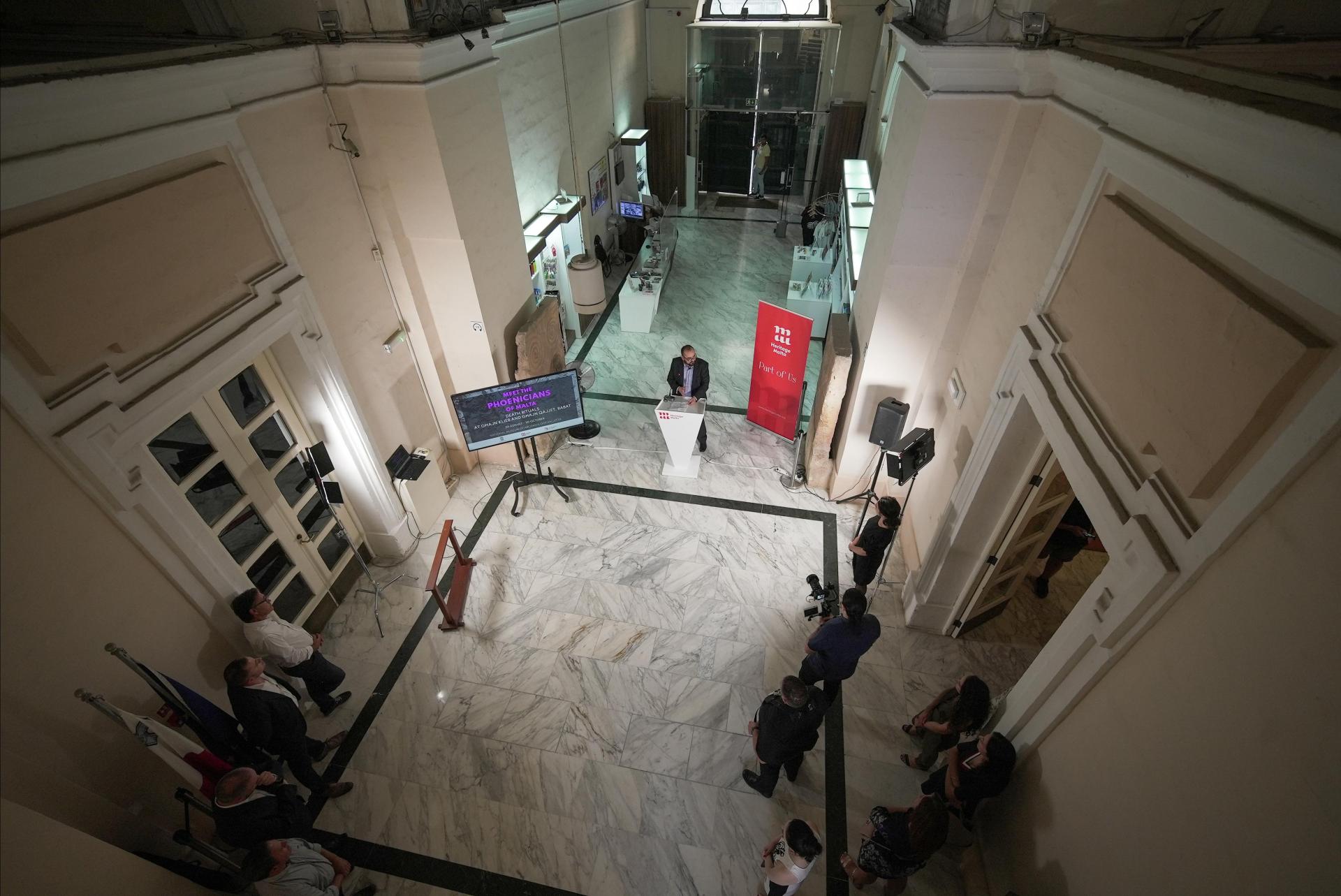 The exhibition will run until October 30. Photo: Heritage Malta

The sarcophagus featured in the exhibition was found by accident in a rock-cut tomb during road trenching works in 2001.

At the time, the decision was taken to preserve it by leaving it in its original findspot.

But in 2020, increased development pressures to improve infrastructural services in the area led to the decision to investigate the tomb.

A joint collaboration between three entities was set up to ensure the best use of the available resources in view of the rarity of the find.

The entities involved were the Superintendence of Cultural Heritage, Heritage Malta and the Department of Classics and Archaeology at the University of Malta.

Together, they formed a team of archaeologists, osteologists, pottery specialists, conservators, diagnostic scientists and field archaeology support staff who are researching the tombs themselves as well as bones and other objects found inside them.

The exhibition "Meet the Phoenicians of Malta" is intended to provide visitors with a snapshot of the research undertaken so far.

Moreover, the tomb in which the sarcophagus was discovered is put in the wider context of the ancient cemetery in the area of Għajn Klieb and Għajn Qajjet in Rabat which was used by the first Phoenicians who settled in Malta some 2,700 years ago.

Speaking at the launch of the exhibition, National Heritage Minister Owen Bonnici said HM's main objective is to interpret the country's history and communicate it to visitors.

Superintendent of Cultural Heritage Kurt Farrugia remarked that following the discovery of the tomb containing the sarcophagus, the Superintendence proactively sought to ensure that all the necessary measures were taken to ensure the complete safeguard of the unique discovery.

The tomb and its contents will be exhibited locally in a permanent manner and the discovery will be presented to international academic fora.

HM's senior curator for Phoenician, roman and medieval sites, David Cardona, said this is the culmination of one of the phases of a project that has been years in the making.

Members of the agency’s field team were actively present not only for the tomb’s excavation but also for the extraction of the sarcophagus.

The agency is also offering its expertise in the research, analysis and conservation of a selection of the artefacts discovered in the three tombs.

Professor Nicholas Vella, from the Department of Classics and Archaeology at the University of Malta, said this was the first time that a series of exceptional discoveries made as a result of developer-funded archaeological investigations were investigated so thoroughly by a team of specialists hailing from the major cultural heritage entities in Malta.

This is a model of collaboration that will certainly be emulated in the future," he said.

The exhibition runs until October 30. Entrance is free of charge.