Valletta will first fall silent before erupting into celebration as activists from either side of the marriage equality debate line up events in the nation's capital over the next two days.

Christian activists dead-set against the Marriage Equality Bill will gather in Castille Square tomorrow at 7.30pm and make their way round the corner to Parliament Square, in a last-ditch attempt to urge parliamentarians to "uphold traditional marriage". 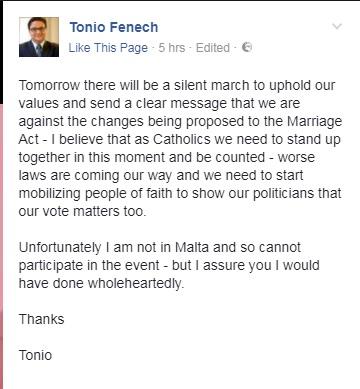 The marriage equality bill will allow same-sex couples to get married by making the Marriage Act and other laws gender-neutral. References to "husband" and "wife" are replaced with "spouses", as are the words "father" and "mother", which make way for the gender-neutral "parent".

READ: So what's this marriage equality bill all about?

MPs are due to vote on the bill for the final time on Wednesday evening. Both major parties have said they favour legislating for marriage equality and the bill is expected to sail through parliament, despite vocal opposition by MPs such as the PN's Edwin Vassallo, who indicated he will defy his party's whip and vote against the bill.

If passed, Malta will become the 14th country in Europe to legally recognise and perform same-sex marriage.

Christian activists are preparing a silent march for tomorrow.

The march is being advertised as a silent one, and with the bill's success all but assured, the mood is likely to be sombre. Former Nationalist Party minister Tonio Fenech was quick to lend his support, writing on Facebook "I believe that as Catholics we need to stand up together" and offering activists his full backing.

Silence will make way for celebration and colour just 24 hours later, with the government urging people to turn up at Castille Square on Wednesday evening to celebrate the passing of the Marriage Equality Bill.

A poster doing the rounds on social media and which was posted to the Prime Minister's own Facebook page notes there are "2 days to go" to the bill being passed, with the Auberge de Castille's iconic steps coloured in the LGBTI rainbow colours to drive the point home.

Celebrations are being organised by the LGBTIQ Council and the Maltese government, rather than activists themselves. 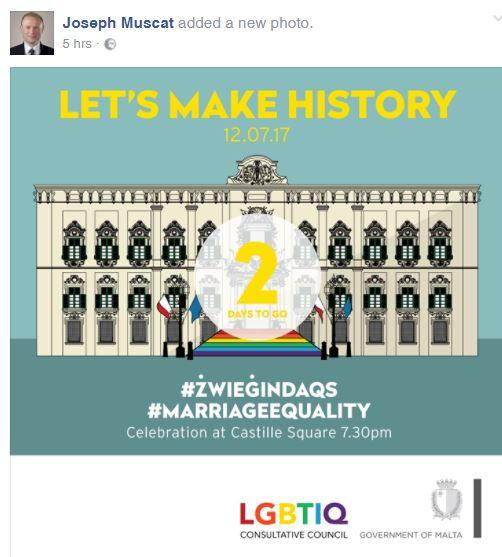 A rally to celebrate the bill being passed is being organised by the government.