A roadside monument to Lassana Cisse, a migrant who was killed in a racially-motivated shooting at Ħal Far last April has been vandalised.

The Ivorian man was murdered in April as he walked home after offering food and support to migrants at the open centre.

Pictures posted on social media on Sunday showed the simple memorial, erected by friends and mourners, smashed on the ground. The makeshift memorial erected near the Jobsplus office featured the victim's name together with candles and flowers.

Passers-by told Times of Malta they were horrified to find a stone slab bearing the migrant's name further up the road.

On Monday morning, sources said the stone slab had been returned to its place.

Cisse, 42, was known for checking in on his fellow countrymen at the open centre after work, trying to ensure they were doing well in a new country.

The shooting, the most serious case of racial violence in Malta to date, shocked the country. Two AFM soldiers were subsequently accused of the murder and are undergoing court proceedings. They have pleaded not guilty. The court heard how they disliked migrants and on the day had allegedly shot at migrants after not finding cats to shoot. 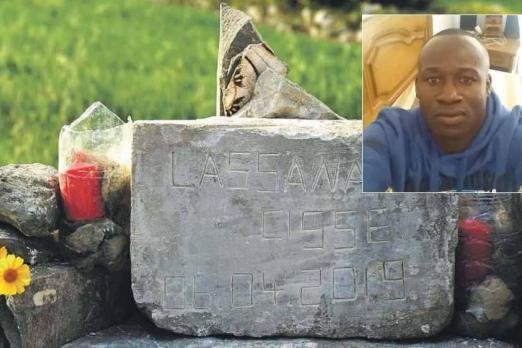