Something big just dropped. The Game Changers on Netflix chronicles the dramatic impact a plant-based diet is having on high-performance athletes. This compelling documentary will no doubt mark a turning point in how we think of food. If the world’s strongest man is a vegan, should we sit up and take note?

But there’s a bigger picture. The largest study to date on the impact of the meat industry on the environment was carried out by Oxford University and reached some pretty shocking conclusions. While 80 per cent of our farmland is used for livestock, it produces just 18 per cent of our calories and is responsible for 58 per cent of our greenhouse gas emissions. That’s more than all vehicles on land, air and sea in the entire world combined. According to research leader Joseph Poore, “a vegan diet is probably the single biggest way to reduce your impact on planet Earth”.

Holy guacamole! Let’s just pause and take that in for a second…

Yes, I know what you’re thinking.

It’s all just propaganda from the high and mighty vegan army; yoghurt-weavers of the apocalypse.

But while the vegans preach and self-flageolet (that’s a food pun – get it?) should we stop rolling our eyes and look at the facts? I wondered why these placid little hippies had become so militant of late. I couldn’t shake the uneasy (and slightly guilty) feeling that they knew something we didn’t. What if the consequences of eating meat and dairy really are that dire? Maybe they are just plain scared.

Again, I know what you’re thinking: two things… 1. I thought this was supposed to be a food review (it’s coming!) and 2. Even if I do care, vegan food in Malta is about as popular as a pork pie in a synagogue.

Believe me, I am well acquainted with the internal conflict zone. To me there is no finer company than a chunk of cheddar. Kissing this hunk of pure heaven goodbye is like ending a toxic but gratifying relationship. Step 1. Impose zero-contact. 2. Pat self on back for iron will. 3. Crave deliciousness of forbidden fruit. 4. Stalk object of desire on Facebook (sorry, I mean at the supermarket). 5. Savour guilty pleasure. 6. Beat self up for lack of restraint/moral virtue/self-respect etc. 7. Repeat cycle from step 1. Sigh…

It’s all too tempting for new vegans to cheat with that tasty old flame bacon, as it sizzles provocatively in the pan.

And not to mention the industrial scale animal slaughter required to get our food to the table. Three billion animals are killed for food every single day.

That’s a staggering statistic whichever way you look at it.

When it’s supply and demand that fuels the machine, it’s hardly surprising that we’re seeing unprecedented numbers jumping the ‘meat and dairy’ ship as it rocks in the storm. But is it really possible to find vegan food that’s not sub-par, or is it an impossible dream, like diet-chocolate or hangover-free Prosecco? #lifegoals

It’s all too tempting for new vegans to cheat with that tasty old flame bacon, as it sizzles provocatively in the pan

Veganism is on the rise in Malta. Most restaurants include some sort of vegetarian option in their menu and dozens now have dedicated vegan menus. So, on a mission to find satisfying guilt-free food I consulted the great oracle that is Google on where to go.

The vegan website The Happy Cow has pretty good listings for Malta. These include the Emperor of India, which also has a respectable 4.5 on TripAdvisor and hundreds of reviews, many waxing lyrical over its “to-die-for” food. Malta’s oldest Indian restaurant offers “traditional northern Indian specialities based on family recipes passed down from generation to generation”. India is by far and away the world’s number one most vegetarian country, with almost 40 per cent of its population eating a plant-based diet.

Frankly it is centuries ahead of the rest of us when it comes to perfecting good veggie food, so it seemed an obvious choice.

While the Emperor of India serves plenty of meat and seafood, their vegetarian menu presents 13 reasonably priced options, including gluten-free choices and home delivery.

But would the vegan dishes cut the mustard? (Sorry, it’s compulsive).

We booked ahead and were met with the industrial light of the establishment’s shop-front sign, the stark brightness of which jarred somewhat with the warm restaurant interior. Greeted warmly we were welcomed inside, where the rich décor soothed our senses. Having arrived early we were offered a seat by the bar in ruby-red armchairs beside an exotic wrought-iron arch; an intricate gateway to India. 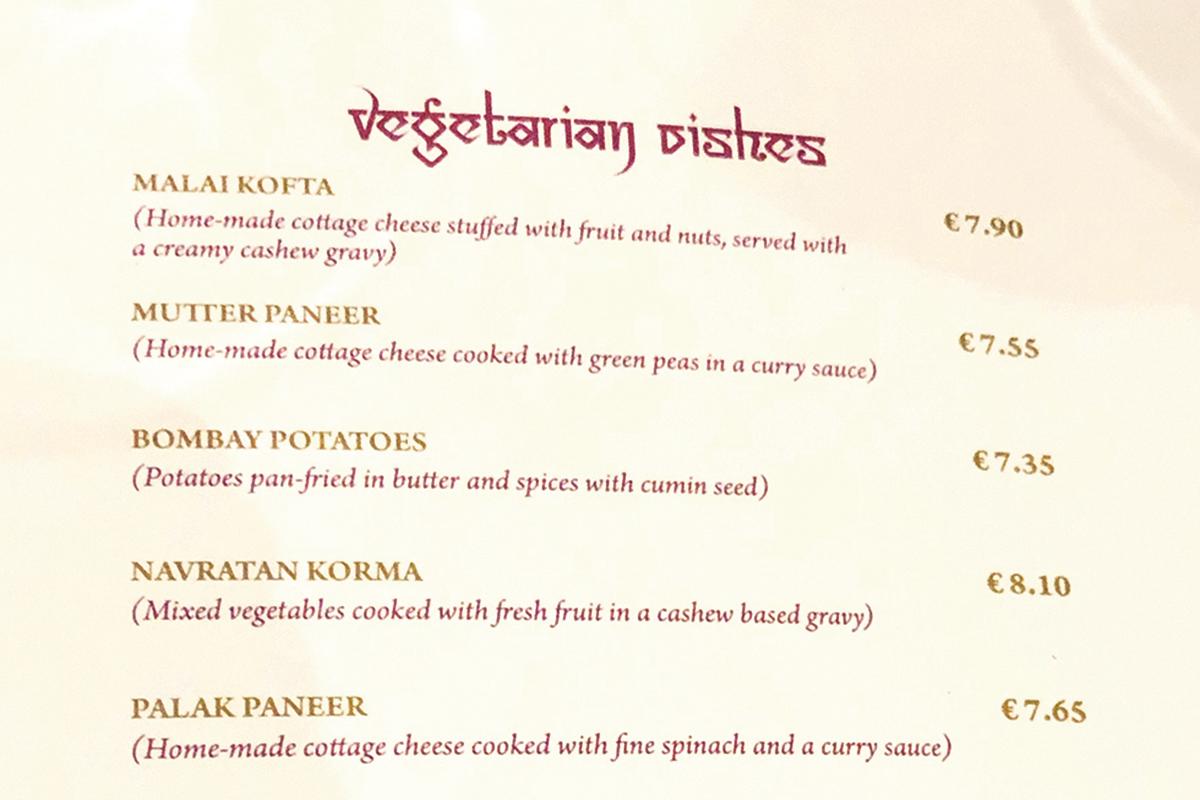 I ordered an Indian beer (When in Rome!) and when the waiter enquired “large or small?” I opted for small. “Small now, next one large”, he proclaimed, grinning widely. OMG, did this man know me? I hesitated momentarily then laughed, realising this must be one of his tried and tested icebreakers. It worked.

We finished our drinks and were seated inside. It was a weeknight, but the place was buzzing with chatter and almost full.

The atmosphere was lively, which made the background music barely audible, but the mood was jovial and relaxed. It took a little time for our second round of drinks to arrive, but the authentic warmth of the waiting staff took some of the edge off the wait.

Time to order. We told our waiter we’d like to try the vegan options. He took care to ensure we understood the difference between the vegetarian, vegan and gluten-free options. When he realised we were ordering ALL of the vegan dishes, he was quick to point out that this was a lot of food for our small group. While we appreciated this courtesy, we completely ignored his advice, only to order enough to induce a food coma in about four or five people.

The waiter asked how spicy we wanted our dishes on a scale of one to 10, to which we responded with a five. This ‘spice-factor’ of five was applied to each and every item we ordered, to customise each freshly-made dish to our chosen hotness. How clever. Perhaps other Indian restaurants might consider asking this obvious question, so each dish is available to everyone, despite their tolerance for spice. Also, if you ask for a five, that’s exactly what you’ll get. I liked this ‘take no chances’ approach to customer service and the food was spiced to perfection.

I’d recommend the creamy West Indian Vegetable Jaipuri with rice, as a great meal for one.

To accompany this tasty generic curry (if you are sharing or very hungry) you might wish to order additional dishes for variety, such as dryer options like Vegetable Bhuna or Tawa Mushroom.

Obviously I know this now, but at this point we had already ordered the lot. I like to think this was because I felt duty-bound to arm you all with a full report. The juicy mushroom rice was the perfect accompaniment to our buffet of choices from the vegan menu, soaking up the creamy sauces and balancing out the powerful flavours of each delicious dish.

If there are rules to eating Indian food, I neither know nor observe them, preferring instead to dollop colourful spoonfuls from each bowl on my poppadum plate, crunching on the pretty rainbow of yellows and reds.

The Bombay buttered potatoes were softly seasoned with cumin to melt in the mouth, but if I had to choose a favourite, the Chana Masala probably stole the show.

Slathered in a russet onion-based gravy, it’s hard to believe the humble chickpea could taste so divine.

Full-to-burst and only half-way through our food, desert was definitely not on the cards. #Failuretoplan

The Emperor’s food compares favourably with any Indian food I’ve eaten in Malta, and indeed elsewhere, but does his vegan food rival its meat-based competitors? It certainly made no pretence at being a meat substitute.

These were unashamedly plant-based dishes and in fact there was no animal product to replace. The dishes stood on their own merit. It was delicious food, period. It just happened to be vegan. Mission accomplished I’d say.