Updated at 5.30pm with PN statement 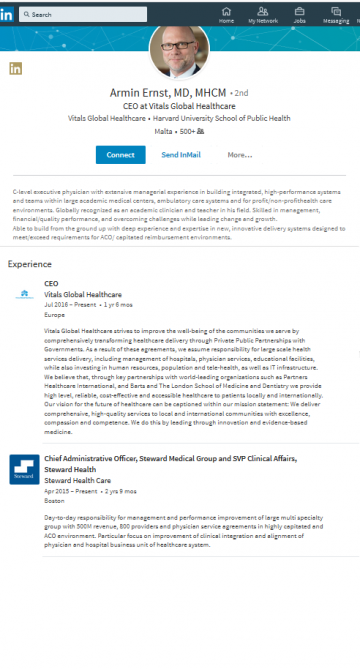 A CEO worked simultaneously for Vitals Healthcare and new concession operator Steward, according to his LinkedIn profile, fuelling speculation that the re-sale of Malta's hospitals' concession had been planned from the outset.

Watch: Watch: Vitals sale of hospital concession to US operator approved by government

Armin Ernst’s Linked In profile shows that he worked for Vitals from July 2016 to present, and that he was the chief administration officer for Steward from April 2015 to present.

Health Minister Chris Fearne said that it was Dr Ernst who suggested that his new employer Steward should purchase the 30-year hospitals concessions.

CEO Ernst and operations chief Eric Buehrens resigned and left Malta last October, less than a year after their appointment VGH. A spokeswoman said at the time: "Dr Ernst had some personal problems and he decided to go back to the US. With regard to the operations chief, he had a short-term contract which was always intended to last a few months."

The transfer of the concession had raised numerous eyebrows as no details have been given of the transaction signed on Wednesday night, which Dr Fearne said was a private deal between Vitals and Steward.

The Democratic Party criticised it today, saying that there were many questions unanswered – but also pointing out that the original contract was also flawed.
“The Vitals ordeal stinks to high heaven, not only since the rightful owners are unknown, but also as it seems that VGH never had the intention to honour such a contract. Moreover, government’s lack of accountability has accentuated this opinion,” it said. 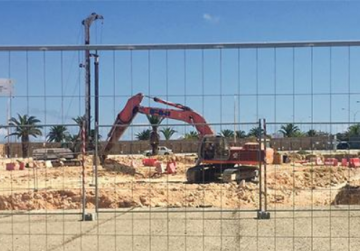 The Barts Medical School site in Gozo was held up by numerous problems.

Although it welcomed the fact that the concession was now in the hands of a recognised healthcare group with a track record in the field, “something Vitals could never boast”, it said that concessions should ideally not sold on by the company. It added that the contracts should ensure that the green light of the health regulator should be needed throughout the concession and not only in the first five years.

It asked how much Vitals had invested of its contracted €200 million, and how much of the supposed investment had been recycled government funds.
Noting that Vitals had failed to deliver on some parts of the contract, it also asked whether the contract should have been null and void, and what punitive terms there were in the contract in case of breach of its terms.

“Would it not have been better for the government to rescind that contract and renegotiate more advantageous terms than the government currently abides by; terms which time and again the current health minister has shown he is not comfortable with?

“In order for these questions and many others to be answered we urge the government to publish the health services contract in its entirety as soon as possible. Incomplete information leads to rumour and doubt. The history of this saga does not diminish it.”

In another statement this afternoon, the Nationalist Party said that the news about Vitals raised more questions and doubts.

The government, it said, should stop hiding and answer the questions being asked.

Like the people out there, the Nationalist Party was asking

• Why did Vitals leave when it had a 30-year contract?

• Were European laws being introduced in the coming days requiring company owners to be known to avoid money laundering the real reason that Vitals quickly sold the concession to Steward Healthcare System?

• Were all procedures and regulations of public procurement observed in the haste to sell and transfer the concession from Vitals to Steward?

• Was it true that Vitals left Malta last March? If this was the case why had no one been informed?

• How much money did Vitals take in the two years it the past two years when it was supposed to be managing the hospitals?

• Since the agreement was no longer valid, was the government willing to make public the whole contract with VGH without censorship?

The PN said it was concerned as the case was a clear example of lack of transparency and good governance.

In the name of the people, itinsisted on clear replies and on an assurance that the transfer would not badly affect patients and staff.