An American hospital company is set to buy the 30-year concession from Vitals Healthcare for the operation of the Gozo, St Luke's and Karin Grech hospitals.

The deal was signed at 9.30pm on Wednesday and the government has already met the chairman of the new company, Steward, Health Minister Chris Fearne said.

The surprise development was confirmed on Thursday morning by Prime Minister Joseph Muscat who said the move was a vote of confidence in Malta by another major US firm.

The deal comes just 21 months after Vitals had secured a highly-questionable deal to operate the three hospitals. The concession agreement said Vitals required government approval if it were to sell the concession within five years, with Mr Fearne saying that this had been granted after due diligence into the new firm. He shrugged off reports that the company had not filed financial reports, saying that this was related to a court action which was being contested by Steward.

The new owner describes itself on its website as the largest private hospital operator in the United States, in stark contrast to Vitals, which has no track record in the sector.

Steward Health Care is the largest private healthcare operator in the United States, where it is responsible for 36 hospitals employing some 37,000 professionals.

"The government is pleased with the fact that the agreement will strengthen the ongoing work even further, which will continue to deliver free and world-class healthcare facilities in Malta," a statement said.

The government said it is assured that the projects started by Vitals Global Healthcare will all be delivered as stipulated by the original contracts.

"The agreement between Vitals Global Healthcare and Steward Health Care guarantees the continuation of work started by the former, in line with the standards the government set out in the PPP agreement. The agreement will be preserved in its entirety.

"The insertion of a new operator in our healthcare system will in no way affect its main pillar – our healthcare service was and will remain free. In addition, Steward Health Care is bound, as was VGH, to retain the same conditions of work for all staff. Furthermore, all agreements with unions will be retained."

The controversial concession with Vitals was signed in March 2016, but has been plagued by controversy since the agreement was signed with Ram Tumuluri, a South Indian-born businessman who signed the deal on behalf of the Singapore-based shareholders. In a tweet on Thursday, Nationalist MP Claudette Buttigieg said she had warned about the dubious deal with Vitals.

The investor group behind Vitals Global Healthcare actually signed a Memorandum of Understanding (MoU) with the government before it  won the tender. The MoU was mentioned in a presentation dated February 2015 given to financial institutions by Vitals in Malta, even though the request for proposals to take over the running of the three hospitals was only published in April 2015, and the tender was officially awarded to Vitals the following September.

Sources familiar in the sector see the move as a positive one which could get the project back on track.

"We need to get this moving. There has been too much focus on all the negative aspects and not enough on what has been achieved," the sources said.

"But we definitely need to meet the building commitments."

Asked whether Vitals would be making money off the deal, the sources said it was "hard to say" but stressed that a government-appointed auditor was scrutinising every payment being made to the company. 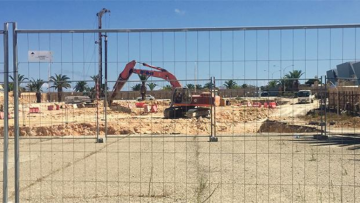 The Gozo site was well behind schedule last August

Even after it was signed, eyebrows were raised at the pace of works, particularly in Gozo, although a spokesman had said that Vitals had built a new ward at Karin Grech, was refurbishing the old medical school and investing some €800,000 in the St Luke’s car park. According to one doctor, VGH was bound to invest some €200 million in its first years.

Less than a year after their appointment was announced by VGH last November, the company’s CEO Armin Ernst and operations chief Eric Buehrens have resigned and left Malta.

The financial aspects of the contract had also raised concerns. The government will be paying some €70 million a year in return for hiring some 700 beds at the Gozo, Karin Grech and St Luke's hospitals.

Taxpayers will be forking out about €2.1 billion for the medical services provided by VGH over a 30-year period. This amount does not cover all required services: the government will have to fork out many more millions for pharmaceutical products and surgery over and above the established minimum service. Extra beds required will also have to be paid for as an additional cost.

The contract also stipulates that the government will have to fork out €36 million so that new medical school facilities in Gozo can be operated by Barts of London, and another €30 million for an air ambulance service between Gozo and Mater Dei.

So far, the Barts Medical School has around 43 students signed up, which sources said were more than the 30 envisaged for the initial cohort.

It said it proved how right the Nationalist Party had been to insist that the sector was too important to be left in the hands of a company with hidden beneficiaries and without any experience in the sector.

The Labour government, the PN said, had gone into a secret agreement with VGH to privatise St Luke’s, Karin Grech and Gozo hospitals. This agreement was to cost more than €2.1 billion in tax.

Only a few days ago, Health Minister Chris Fearne tried to distance himself from this agreement and this confirmed the government’s lack of seriousness in the deal, the PN said.