Vodafone Malta and Melita Ltd are to merge, their respective shareholders announced this morning.

The combined company, which will be 51 per cent owned by existing Melita shareholders Apax Partners and Fortino Capital, will consolidate the two companies' mobile phone, cable TV and broadband internet services.

The deal must be approved by the Malta Competition and Consumer Affairs Authority before it can be finalised, with a statement saying the transaction is expected to close in the second half of this year.

READ: GO warns that competition could be hindered by rivals' merger

If approved, the merger will effectively narrow local competition for mobile phone services down to just two companies. But in a press conference explaining the deal, Vodafone CEO Amanda Nelson argued that "the number of operators is no longer as relevant" given the rise of services such as WhatsApp and Skype.

The merged company will operate under the Vodafone brand, with shareholders saying the deal would allow the company to operate cost synergies and put it in a stronger position to compete with GO. 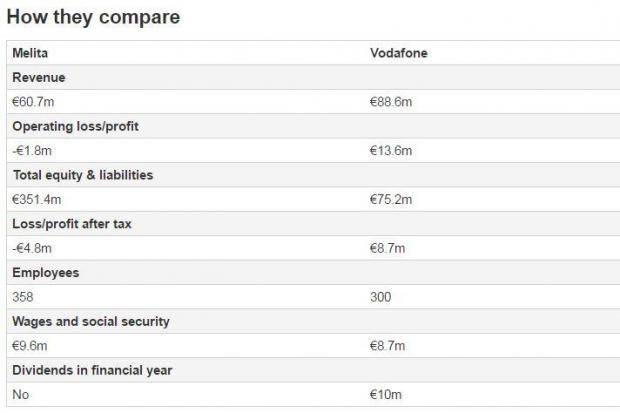 Vodafone Malta has been valued at €208 million and Melita at €298 million as part of the deal, with the combined company assuming net debt of approximately €345 million.

The statement said that the combined company would not be consolidated in Vodafone’s accounts and will be reported on an equity accounting basis after completion of the transaction. The transaction is not expected to have a material impact on Vodafone Group’s free cash flow or earnings.

Current Melita CEO Harald Rösch will take over as CEO while current Vodafone Malta CFO Caroline Farrugia will take over the CFO spot. Vodafone said it would announce a new role for Amanda Nelson, its current CEO, in due course.

Competitor GO reacted to news of the deal by issuing a statement in which it warned that it was important the regulator ensured a fair playing field for the benefit of consumers.