The granting of voting rights to 16-year-olds was just the beginning of a series of youth reforms the country needed to make, a special session of Parliament heard on Tuesday.

Youth organisation representatives filled the Chamber of Renzo Piano’s iconic Parliament on Tuesday afternoon to weigh in on the legal amendments approved by MPs the previous day to lower the voting age in general elections to 16.

On Monday, Malta became the second European Union country to grant 16-year-olds the right to vote after members on both sides of the House voted unanimously in favour of the changes.

Teens aged 16 will now be able to cast their votes at national and European Parliament elections, having already been given such right for local elections in 2014. 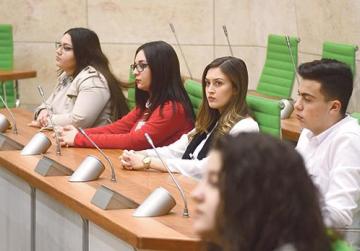 The first opportunity to exercise their new right will be the 2019 European elections, with the lowered voting age expected to mean an additional 8,500 voters.

Teenagers younger than 18, he said, still needed parental consent to join political organisations, something he could not reconcile with his new-found voting rights.

Similarly, Mr Piccinino said the House should debate lowering the age of sexual consent to 16 and changing the law so taxes paid by those aged 16 could be considered part of their national insurance contributions.

Other youths present said that they had often been told by adults that their opinions did not matter, that they were “all sizzle but no steak” and they were “too young to have a say”. Now, the granting of voting rights meant they had a seat at the national table, one that gave them a voice just as loud as anyone else’s, they argued.

Prime Minister Joseph Muscat said politics would have to change: “The way we do politics, the dialect we use is going to have to change to reflect this new reality.”

Giving some insight into the government’s vision for youths, Dr Muscat said new EU rules in the pipeline would leave it up to Member States to decide whether the minimum age for use of social media should be 13 or 16.

After discussing the matter internally, the government was leaning towards 13, he said. This was because the change in voting rights was part of a holistic vision.

“We did not do this at the end of the legislature but at the very beginning of the cycle,” Dr Muscat said, insisting that the move was not a vote-catching exercise.

He said that he had learnt from his two young daughters that parents could not buy 10-year-olds with anything, never mind buying a 16-year-old with voting rights.

Opposition leader Adrian Delia was quick to impart some paternal experience of his own. 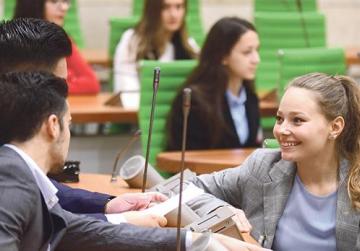 He told the youths present in the House that he had recently told his young son to turn off the television and the youngster’s reaction was: “I’ll tell my sisters not to vote for you at the next election.”

Joking aside, the father of five said that his vision was not for youths to be influenced by politics but for politics to start being influenced by youths.

In closing, Speaker Anġlu Farrugia urged youths to be conversant with the country’s history. For them to understand what was happening today, they needed first to know where the country had come from.

Offering some advice, Dr Farrugia asked the youths not to take their new rights lightly. After all, so many still did not have the right to a free vote, Dr Farrugia said.